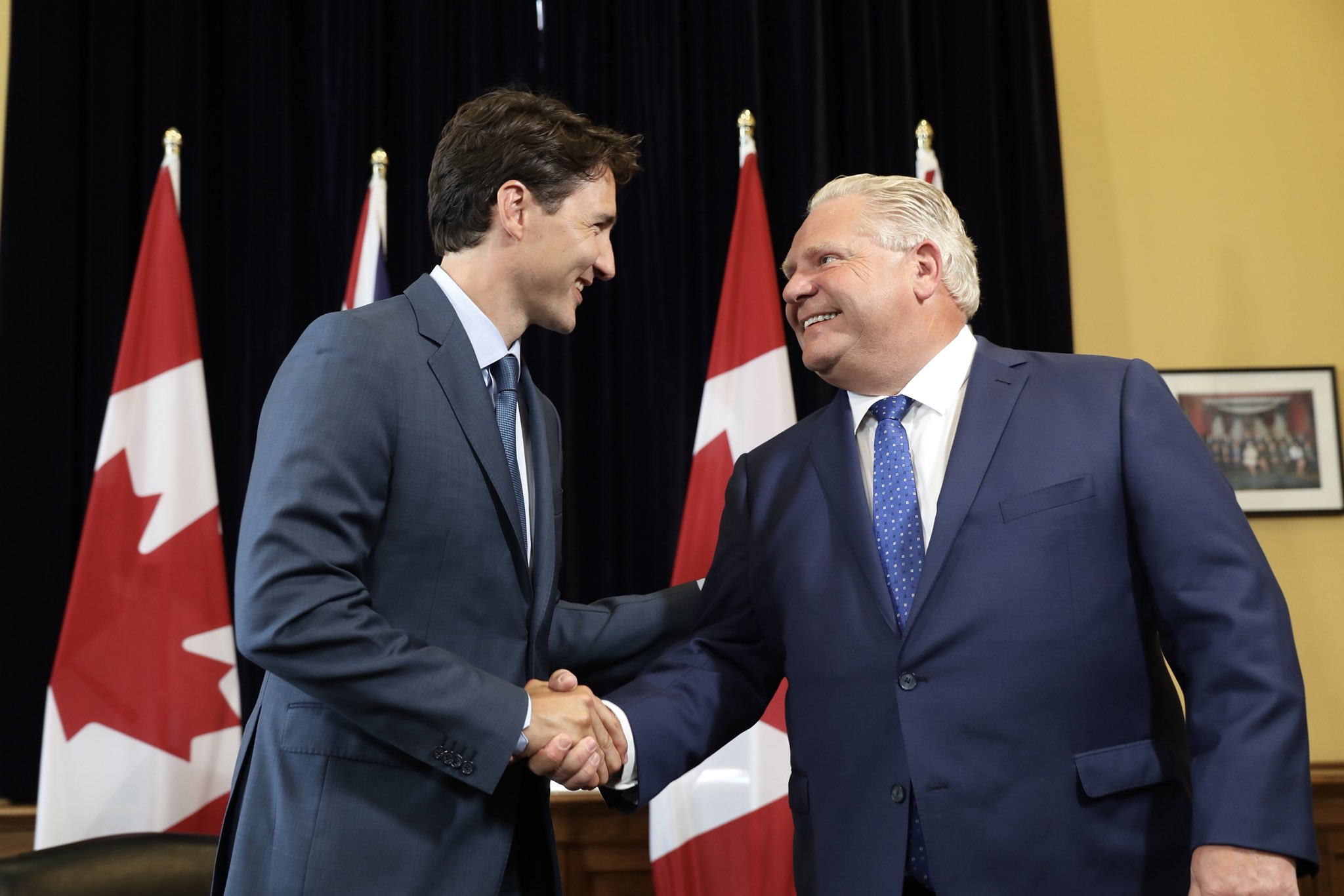 Prime Minister Justin Trudeau said Thursday that Ontario Premier Doug Ford wasn’t as aware of Canada’s international obligations to asylum seekers “as he might have been.”

The prime minister made the remarks after meeting with the newly sworn-in premier at Queen’s Park in Toronto on July 5 — the first time the two met to discuss the thousands of asylum seekers who have made claims at the borders of Ontario, Quebec and Manitoba.

It came on the heels of a belligerent news statement from Ford's team, accusing Trudeau’s government of creating a “mess” of the refugee system and claiming it “encouraged illegal border crossers.”

Article 31 of the UN Refugee Convention, to which Canada is a party, says asylum-seekers can’t have penalties imposed on them for the way they enter a country, if they present themselves promptly to authorities and show "good cause" for their presence.

“It didn't seem to me that the premier was quite as aware of our international obligations to the UN convention on refugees, as he might have been,” said Trudeau. “So I spent a little time explaining how the asylum seeker system works and how our system is supposed to operate.”

Trudeau emphasized the importance of federal and provincial officials getting "clarity on how we can actually work together to ensure that we are holding true to our values.”

A refugee and an immigrant are not the same. Immigrants choose to settle in another country, often for economic reasons, while refugees are those fleeting violence, war, terrorism or persecution.

“It didn't seem to me that the premier was quite as aware of our international obligations to the UN convention on refugees, as he might have been" — Justin Trudeau on Doug Ford #cdnpoli #onpoli

People who make claims at the border for refugee status do not automatically become refugees; they must first be vetted for any threats to Canada and have their claim processed.

There is no guarantee that someone seeking asylum will be granted protected status. For example, if they are determined to be economic migrants, they are sent home after their claim is processed.

Trudeau said he “attempted” to reassure Ford that the system for processing would-be refugees is different than the one that processes immigrants, and that Canada has always had separate procedures to deal with both.

“It's important as leaders in Canada to continue to protect one of the great advantages that Canada has over so many other countries — particularly at this time — that Canadians are generally very positively-inclined towards immigration,” said Trudeau in a press conference after the meeting.

“People know that people coming here to build better lives for themselves actually contribute tremendously to our country and to our success, and this is something we're going to continue to ensure — that our immigration and refugee system is applied responsibly.”

Ford’s government did not appoint a separate immigration minister when it unveiled its cabinet last month, instead handing the file to Lisa MacLeod, its minister of children, community and social services and the minister responsible for women's issues.

But a day later, the kind words appeared to be rejected by Ford, who said in a Thursday press statement that "the federal government encouraged illegal border crossers to come into our country."

"This has resulted in a housing crisis, and threats to the services that Ontario families depend on," he added in the statement. "This mess was 100 per cent the result of the federal government."

Toronto City Coun. Kristyn Wong-Tam tweeted that Ford was taking the wrong approach to the situation.

"We need a premier to coordinate resettlements across Ontario," wrote Wong-Tam. "Unilaterally declaring you're 'ending cooperation' doesn't stop the flow of asylum seekers. It means people lost in the system needlessly and Toronto bearing the brunt of the resettlement work."

— with files from Steph Wechsler and Fatima Syed

Mr. Trudeau should educate himself. His now infamous tweet, "You'all come" will go down in history. No, he never was ready and now he's cost Canadian taxpayers millions....not to mention their security. Trudeau's legacy is guaranteed. Another four year term in 2019? We all should shudder at that thought. October 21, 2019 must bring renewal with a fully competent PM and party in order for Canada to survive..