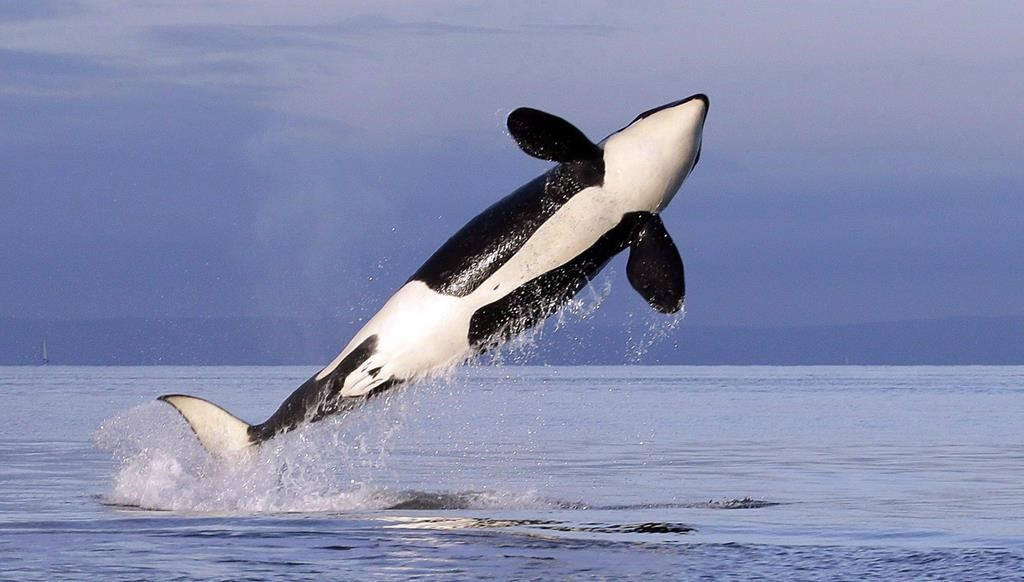 A female resident orca leaps from the water. Southern resident whales are critically endangered and may be heavily impacted by the Trans Mountain pipeline expansion. Photo by Elaine Thompson
Previous story
Next story

Elected representatives from Salish Sea communities have urged the prime minister to reconsider the Trans Mountain pipeline expansion, citing the orca Tahlequah as "our canary in a coal mine."

Tahlequah, also known as J35, carried her dead calf in the waters of the Salish Sea for 17 days this summer.

Councilors and trustees from Salish Sea island communities in the United States and Canada, filed an open letter to Prime Minister Justin Trudeau Sept. 5, expressing disappointment and alarm about the environmental risks of the Trans Mountain project that was halted by an Aug. 30 Federal Court of Appeal ruling.

Although Trudeau has repeatedly pledged to get the project back on track, the Salish Sea representatives urged him to use the court decision as an opportunity to reconsider.

"We believe your plan to transform our waters into an export corridor for nearly a million barrels of toxic bitumen per day for the next 50 years or more years exposes us to unacceptable levels of risk," says the letter. "Because we live along this corridor of risk, we feel compelled to speak out at this critical moment."

Pierre-Olivier Herbert, spokesman from the Minister of Finance’s office, responded to the letter in an email to National Observer, stating “the Trans Mountain expansion project is an investment in Canada's future, and our government continues to have every confidence in the project.”

The orca Tahlequah's haunting behaviour seemed like a direct message "that through our treatment of her environment - her home - we are responsible for the death of her infant."

The writers state that Tahlequah's haunting behaviour seemed like a direct message "that through our treatment of her environment - her home - we are responsible for the death of her infant."

Trudeau has indicated the government will proceed, stating on Tuesday that "the facts and evidence demonstrated that the project is in the national interest, and represents a sound investment for Canadians. While purchasing the project was not our first choice, it was the right choice to protect thousands of jobs, and we will ensure that the project moves forward in the right way.”

“Our government inherited a flawed environmental review process from the previous Conservative government and made efforts to improve it, something that the Court acknowledged in its ruling,” Herbert wrote.

Jocelyn Lubczuk, press secretary for the Department of Fisheries, Oceans, and the Canadian Coast Card, responded in an email to National Observer that through the $75 million Coastal Restoration Fund, new Coast Guard search and rescue stations will be opened that protecting and restoring important marine ecosystems are a priority.

Lubczuk stated that the government is “taking ambitious action to protect and recover" the southern resident whale population and is “committed to working collaboratively with all willing partners, including Indigenous communities to ensure that we effectively protect our oceans and our coasts.”

The $75 million Lubczuk referred to is coming from the Ocean Protection Plan. Launched in 2016 by the federal government, it is a $1.5 billion investment in protecting Canada’s oceans and coastline.