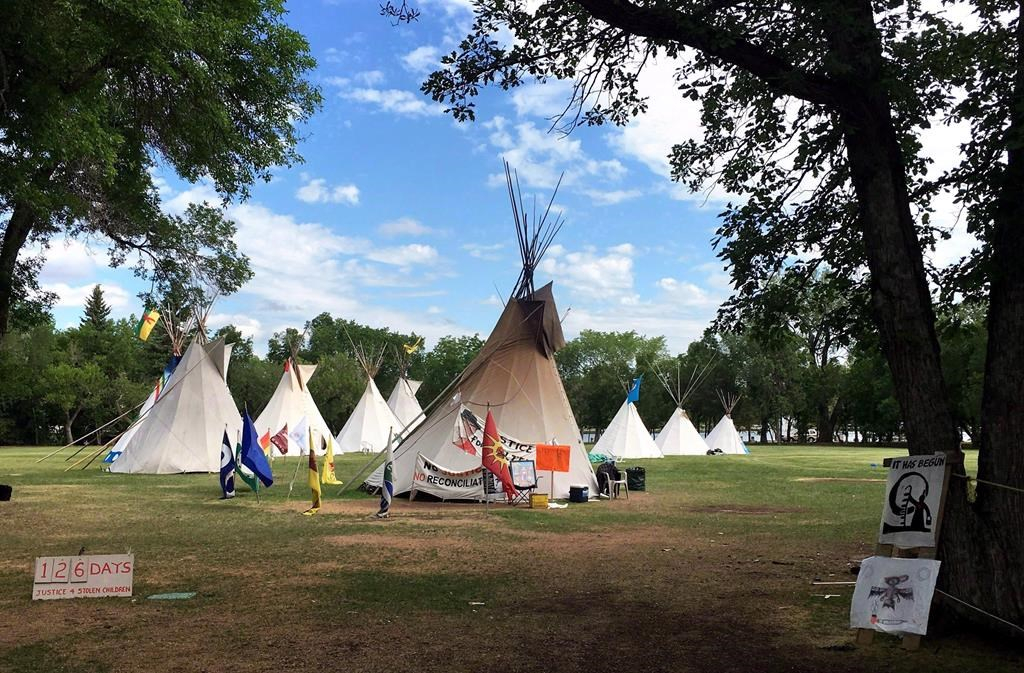 The Justice of Our Stolen Children protest camp is seen near the provincial legislature in Regina on July 3, 2018. File photo by The Canadian Press/Samantha Maciag
Previous story
Next story

A Saskatchewan judge has ordered a group of protesters to remove their teepees from the lawn outside the provincial legislature.

Protesters started camping at the site at the end of February to bring attention to racial injustice and the disproportionate number of First Nations children in care. A few protesters were removed by police in June but the camp was set up again two days later and officers have held off ever since.

The province went to court seeking an order to evict the protesters, arguing the Justice for our Stolen Children Camp violated bylaws and made it hard to maintain the land across from the legislature.

"The protesters' claim to a right to encamp around the clock, on a permanent or indefinite basis ... is not one that can be endorsed by this court," she wrote in a ruling released Friday.

"The protesters' occupation of the west lawn, in the shadow of the most influential building in the province, although claimed in pursuit of heartfelt grievances, serves in the end to diminish the rights of all others to access the space and to enjoy the same fundamental freedoms and values claimed by the occupiers."

She also dismissed an application by six protesters to have their arrests in June declared unlawful. None of the six were ever charged by police.

"Police are hereby authorized to arrest, or arrest and remove, any person" who is violating the order to vacate the camp, Wilkinson said.

Some of the protesters, occupying about 15 teepees on the site, spoke to reporters later Friday. They plan to stay over the weekend while consulting with lawyers.

Robyn Pitawanakwat told CJME radio in Regina that they believe they have permission from the province to stay awhile longer.

The camp is important, she added. "People know to come here to find us here. This is a beacon for them, of a different way of interacting with bureaucracy."

One of the group's lawyers, Dan LeBlanc, said the protesters have 30 days to decide whether or not to appeal to a higher court. He anticipated the camp would be dismantled before then, although there will likely be discussions about how it should be taken down.

"We hope there's some allowances from government to allow the camp to be dismantled in a culturally appropriate way," he said.

The Federation of Sovereign Indigenous Nations issued a release saying an appeal is likely and the organization will continue to support the protesters.

"It is a terrible day when the provincial government puts a bylaw before families standing up for their rights," said vice-chief Heather Bear, adding she's worried about police ejecting families with children at the camp.

Regina police Chief Evan Bray said in a release that he will be taking time to read the decision.

"As the Regina Police Service retains discretion as to the manner of enforcement of the Order, there is time to communicate with all parties with the goal of achieving a peaceful resolution," he said.

Central Services Minister Ken Cheveldayoff said in a statement that the government expects protesters to abide by the order within a reasonable time.

"We are fully supportive of peaceful protests but the act of overnight camping, burning combustibles and erecting structures in the park cannot be done without the proper permits and approvals, as confirmed by today's court order."

There is no doubt that

There is no doubt that Indigenous protests, most of them entirely peaceful have raised the profile of legitimate problems imposed on them for generations by European colonists. Only the trolls continue to spew vitriol and genocidal sentiments displaying their ignorance and their ugliness - as trolls are wont to do - I guess that is the inherent nature of trolls? Too bad sunlight no longer turns them to stone - can we blame that on global warming or solar dimming?