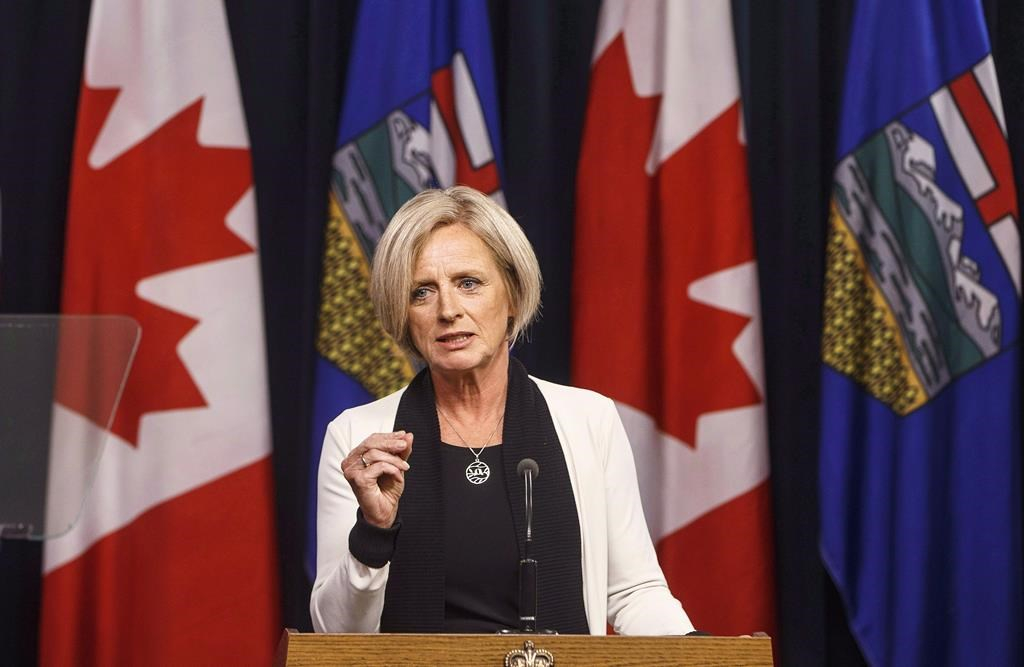 Alberta Premier Rachel Notley says she will go up against controversial anti-pipeline activist Tzeporah Berman in duelling speeches next month.

"I will be going myself to make the case for Alberta and our industry to counter misinformation and ensure that the whole story is told," Notley said to applause in a speech Thursday to the Alberta Urban Municipalities Association in Red Deer.

Berman is scheduled to speak at the Alberta Teachers' Association convention on Oct. 13 at the River Cree Resort, on Edmonton's western boundary.

"I have no problem with it. It's a free country. But what I will say is that I will not let it go unanswered," said Notley.

"In coffee shops, in union halls, in church basements, and in boardrooms I will always stand up for Alberta."

Notley and Berman will not go head to head but will speak at different times.

She has been an outspoken critic of the oilsands, the oil and gas sector, and pipeline development. She became a political lightning rod in Alberta after she was appointed to a provincial oilsands advisory group early in Notley's mandate.

Berman has not been on that committee for over a year, but the Opposition United Conservatives continue to bring up her involvement and the symbolism of anti-energy activists helping steer government policy.

"But it was the premier who lent credibility to Tzeporah Berman's extreme ideas when she appointed Berman to the government's Oil Sands Advisory Group — a decision that the premier has never apologized for or stated regret."

The United Conservatives have protested Berman speaking at the convention.

Education critic Mark Smith said last week that legitimizing Berman's anti-pipeline stand in front of an audience of teachers risks her viewpoints bleeding into day-to-day classroom instruction, especially given the teachers' union is working with the province on a curriculum overhaul.

Notley dismissed suggestions Thursday that her decision to join the event is politically motivated, and she said she doesn't view Berman as a political albatross that her NDP must find a way to shrug off with a general election looming in the spring.

She said her decision is due to the high level of publicity attached to Berman's appearance.

"Because it's getting the attention that it is, it's an absolutely excellent opportunity for me to make the case on behalf of the people of Alberta for why this (energy industry) is a good thing."

Notley has been travelling the country this year, extolling the importance of Alberta's oil industry and fighting with the B.C. government to get the Trans Mountain pipeline expanded to take more oil from Edmonton to the B.C. coast so that the province can fetch a better price from overseas markets.

That pipeline was approved by Ottawa in 2016 but now sits in legal limbo as the federal government reacts to a court order to study the project's impact on marine life and consult more with affected First Nations.

"Education critic Mark Smith said last week that legitimizing Berman's anti-pipeline stand in front of an audience of teachers risks her viewpoints bleeding into day-to-day classroom instruction, especially given the teachers' union is working with the province on a curriculum overhaul." Good Grief! Are we living in a George Orwell novel? Should teachers and students not be exposed to opinions that haven't been vetted by the UCP?

Rachel, this upcoming Speaking Engagement would be a very good time to outline your Alberta TAR SANDS TAILINGS Cleanup Campaign.