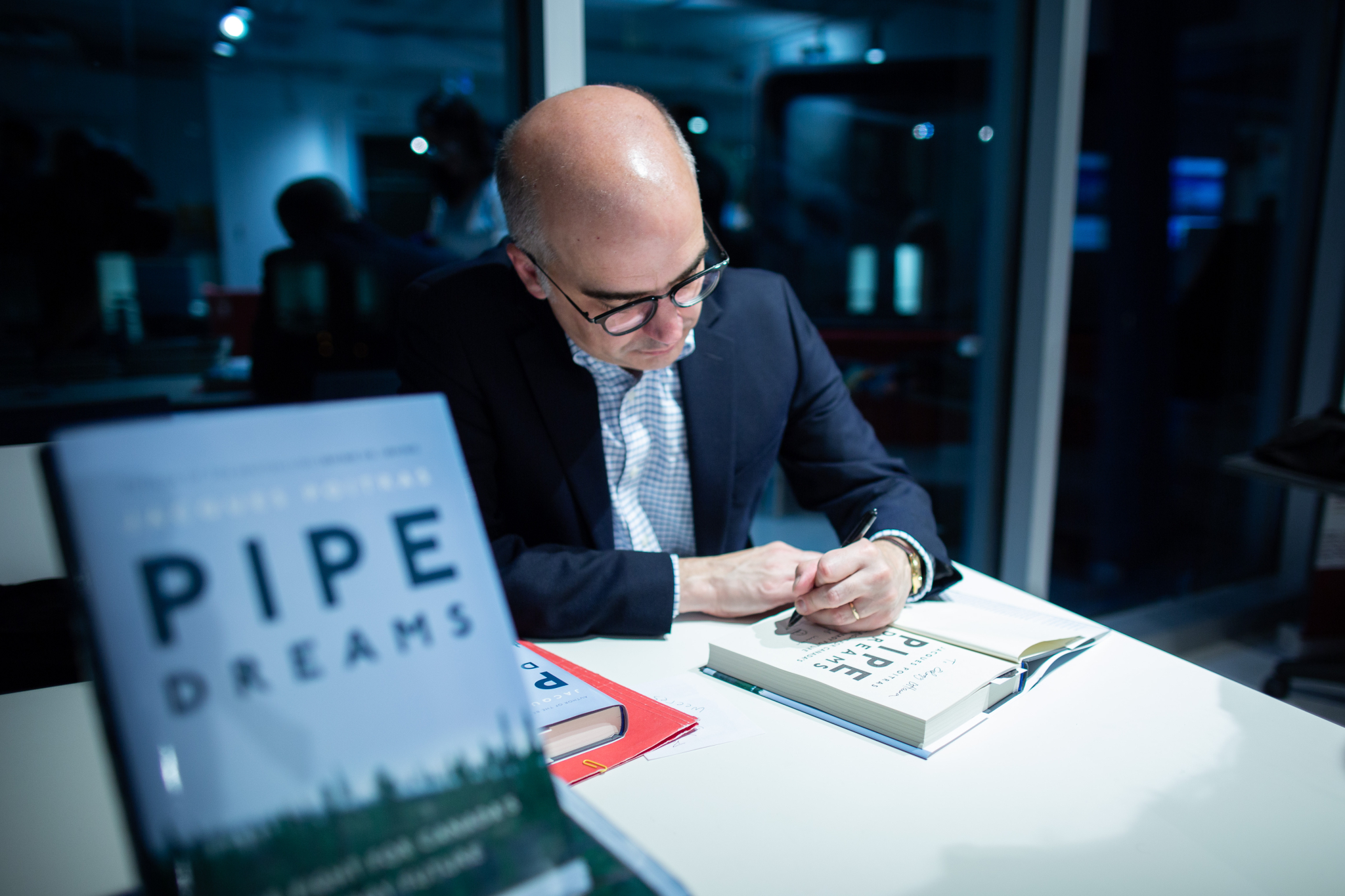 Journalist Jacques Poitras signs a copy of his book Pipe Dreams in Ottawa on Oct. 4, 2018. Photo by Alex Tétreault
Previous story
Next story

What led to the failure of the Energy East pipeline, the largest oil pipeline project ever proposed in Canada?

Journalist Jacques Poitras set out to chronicle the story of the Energy East project several years ago, but by the time he finished his book, the pipeline had been terminated by its proponent, Calgary-based energy company, TransCanada.

The stunning development turned his newly-published book Pipe Dreams into a political whodunit.

Who is the prime suspect?

At a book launch hosted in Ottawa by National Observer Oct. 4, Poitras noted that many have pointed toward tougher criteria introduced by the federal energy regulator, the National Energy Board, in 2017.

The criteria was introduced uniquely for the Energy East pipeline. It would have required the company to account for the entire climate-warming impact of the project, including any pollution produced during construction and operation of the pipeline, as well as the pollution from any oil or other petroleum products shipped on the pipeline.

“A lot of the critics or opponents of the government have essentially said that (Prime Minister) Justin Trudeau killed this pipeline through the new NEB criteria,” Poitras said in response to a question from National Observer managing editor Mike De Souza. “Even some environmentalists have basically come to the same conclusion in the sense that they are saying that the new criteria were better criteria and that’s what killed the pipeline. And I think from their point of view it shows that their campaigning paid off.”

No need for three pipelines

“There were municipalities in my riding that had passed municipal resolutions in opposition to it, even before there was a process," Liberal MP @WillAAmos told @mikedesouza ."...That’s the legacy of the Harper administration." #pipedreams #EnergyEast

“People who really study energy markets and oil prices… have said that because of where the price is now — it’s come back up but it’s lower than where it was when this project was conceived — the growth in production in the oilsands is forecast to be slower. It will still grow but more slowly, and at that current rate of growth, the case for three pipelines is not there. There would be a need for two.”

Right now, there are three other Canadian export pipelines in various stages of development, including Enbridge's Line 3, which goes from Alberta to Superior, Wisconsin, TransCanada's Keystone XL, which links Alberta producers to the gulf coast of Texas, and the Trans Mountain expansion project, now owned by the Canadian government, which if built would transport oil to a terminal in Burnaby, which is in the Vancouver region.

Using oilpatch data, the federal budget in 2018 released numbers showing that the oilpatch wouldn't need all of these pipelines, at least for a decade.

Poitras is a CBC reporter based in New Brunswick, where the Energy East pipeline was to end at the Irving Oil refinery in Saint John. He took time off from his regular reporting job in order to travel thousands of kilometres along the proposed route from Alberta and spent two years researching and writing Pipe Dreams, which went on sale in September. He chronicled the high-stakes political and industrial drama from start, when the concept was made public in 2011, to finish, in the fall of 2017, when TransCanada pulled the plug.

National Observer reached out to MPs from all four parties, seeking comments about the issues raised in Poitras's book.

This included emails and a phone call to Conservative Leader Andrew Scheer's office, as well as requests for interviews with two Conservative politicians, the federal party’s natural resources critic Shannon Stubbs, who represents an Alberta riding in Parliament, and Indigenous relations and services critic Cathy McLeod, who represents a British Columbia riding in Parliament. They declined.

Federal politicians from the three other national parties all granted interviews, saying that former prime minister Stephen Harper’s Conservatives were to blame for the breakdown of the federal review of the Energy East oil pipeline. While the process began when the Tories were in power, it ultimately concluded two years after the Trudeau Liberals were elected to form a majority government in 2015.

Amos is an environmental lawyer who previously worked for Ecojustice, an environmental law organization that pursues legal battles to improve environmental protection and conservation. He represents the Quebec riding of Pontiac, across the river from Ottawa, which was near the route of the proposed pipeline.

“There were municipalities in my riding that had passed municipal resolutions in opposition to it, even before there was a process. This is the legacy, I feel, of the polarization of energy and environment discussions and that’s the legacy of the Harper administration,” he said.

“Our government put in place a series of interim provisions to improve the process and to make it more rigorous. At the end of the day, TransCanada, the company bringing Energy East, decided it didn’t want to move forward with the project. That was a business decision that they made, but we were certainly, and had it gone forward, going to evaluate it rigorously."

NDP environment critic Alexandre Boulerice, who represents a Montreal riding in Parliament, said the Energy East debate was a passionate one, but that Canada has learned a couple of things about what went wrong.

“First, it's quite difficult to go through that process without a real social acceptability,” he said in an interview. “If you have farmers, citizens, mayors against the project, it’s going to be tough. And second, the assessment process has to be credible, and when the credibility of the board is put in question and their neutrality and their expertise, this thing can derail really fast."

Green Party Leader Elizabeth May chats with National Observer’s Mike De Souza about her assessment of the Trudeau government’s climate and environmental policies, as well as the Energy East and Trans Mountain pipeline sagas.

Boulerice and Green Party Leader Elizabeth May both agree that Trudeau’s government has failed to fix all of the mistakes made by the former Harper government when it dramatically rewrote Canada’s environmental laws in 2012.

May told National Observer that the Trudeau government’s solution, Bill C-69, keeps the same framework introduced by Harper for reviews.

“As you can tell, I’m livid because I’ve done environmental assessments since the first one in 1976," May said. "I never thought that after the 2015 election, we would see a piece of legislation as putrid as C-69… They spent over $1 million on an expert panel of environmental assessment lawyers, and then they completely ignored their advice. They had 31 public hearings across Canada and then they treated that expert (advice) — on what the government should do — they treated it just as one more stakeholder input as part of the other ones they got. I hope the Senate takes a long time with Bill C-69 and repairs it so that it doesn’t keep Harper’s framework… It’s shameful.”

If the environmental criteria

If the environmental criteria for Energy East was more environmentally friendly why wasn't it used as the guideline for TransMountain? One reason alone. Quebec votes matter more to Mr. Trudeau.

More a matter of timing. The

More a matter of timing. The Trans Mountain Expansion was assessed under the old rules in place at the time, established during the Harper era. Energy East was a more recent project, and hence had to comply with newer rules.