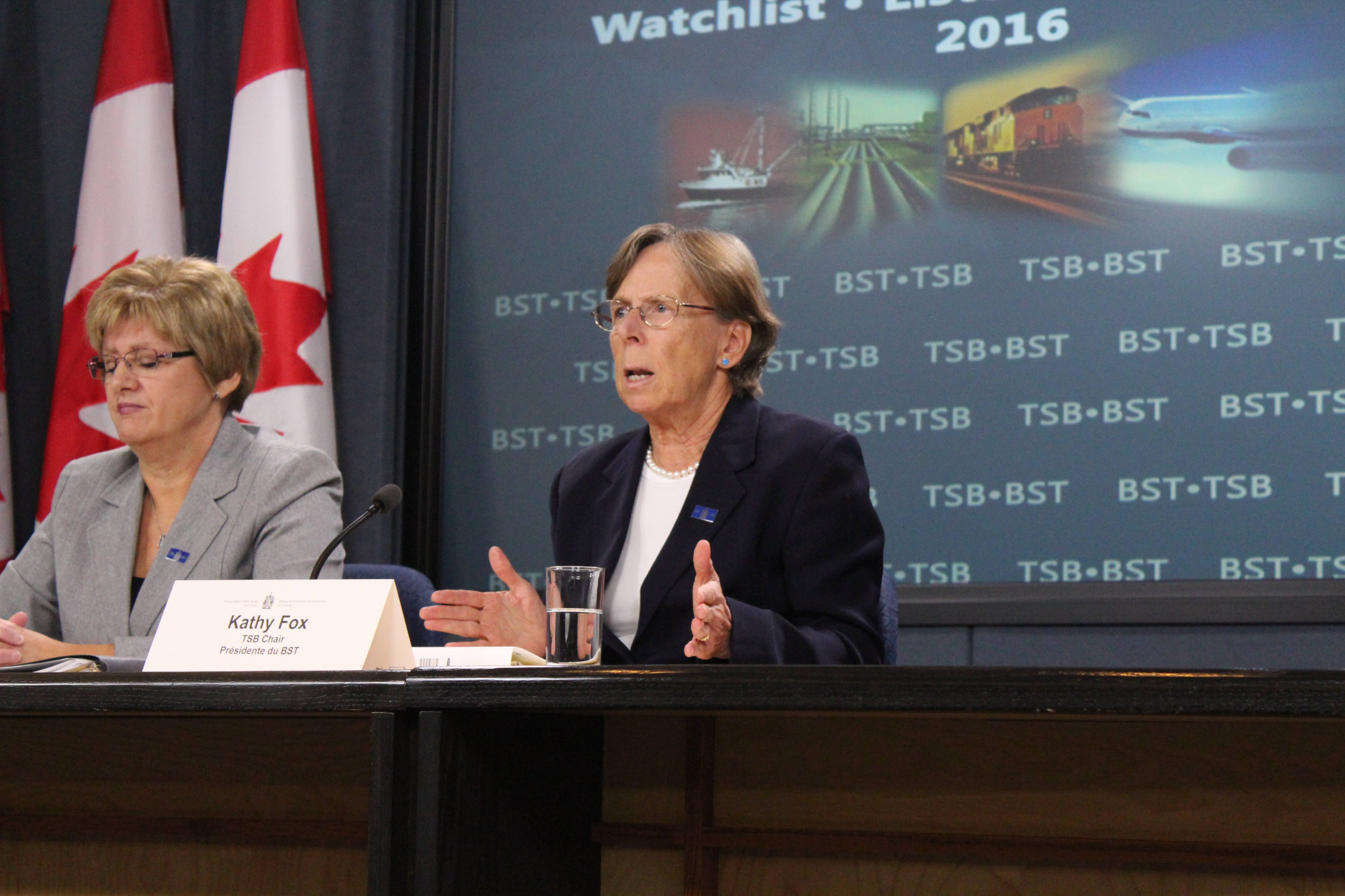 Kathy Fox, chair of the Transportation Safety Board of Canada, and Board member Hélène Gosselin speak to reporters in Ottawa on Oct. 31, 2016. Photo by Mike De Souza.
Previous story
Next story

The Transportation Safety Board of Canada says there’s no excuse for the federal Transportation Department’s failure to implement key safety recommendations, more than three dozen of which have been outstanding for more than 20 years.

Board chairwoman Kathy Fox told a news conference today that the board will be taking steps to make sure governments and industry leaders take action on recommendations to improve safety in civil aviation, railways, pipelines and marine transportation.

“No longer is it enough to point out a problem and wait for others to take notice,” said Fox. “In the next few days and weeks, we’ll meet with key stakeholders to push for concrete action, and then we’ll report publicly on the results.”

Fox cited the example of recommendations to reduce the risk of runway overruns, something the board has been pushing for since an Air France jet carrying 309 passengers skidded off a runway and burst into flames at Lester B. Pearson International Airport in August 2005.

Fox says she plans to meet with the president of the Greater Toronto Airports Authority on Thursday to ask what steps have been taken to improve runway safety, noting that Transport Canada has promised new regulations, but they are not yet in effect.

The independent agency also released a so−called watch list today, saying the board is particularly concerned that fatigue among freight train crews has been a factor in numerous railway investigations.

The board says too many train crews aren’t getting the rest they need because of long shifts and irregular scheduling that interferes with normal sleep patterns.

“I welcome the TSB’s update to its Watchlist, as it plays an important role in our ongoing efforts to improve safety in the aviation, marine and rail sectors. The TSB’s update reflects the hard work that municipalities, provinces, railways and Transport Canada have invested to address the many challenges in improving railway crossing safety, as well as the recent investments the Government of Canada has made in the new Rail Safety Improvement Program to help fund new technology and upgrades in many communities.

“The TSB recommendations and Watchlist are a very helpful tool to bring a higher level of focus for the transportation industry and Transport Canada on areas where major issues need to be addressed," Garneau said. "I have directed Transport Canada to provide me with specific areas where faster progress in reducing risks can be made."

He added that his department would work with the TSB to address all of the identified issues.

“The Transportation Safety Board of Canada says there’s no excuse for the federal Transportation Department’s failure to implement key safety recommendations…”
Should (pipeline) ‘incident’ REVIEW BOARDS function more as a tribunal, and review ALL relevant issues. The corporate ORGANIZATIONAL structure should ensure that someone has the ‘functional’ responsibility to report to the Boards, on a ‘need to know basis’ , about corporate ‘areas of operational concern’ …then leaving the Board accountable to deal with the major issues , in a timely manner ..!!
How many times ,when looking back, can a organization recall how they might have performed differently---had they been made aware of potential problems …

Let the chair of the (Canadian) Transportation Safety Board suggest this…
… incorporate the George Bush ,SOX Act, language …for Transportation Corporation mandates…. where penalties range from $ 1 million to $5 million and 10 to 20 years in jail…OR BOTH !!
With this ‘accountability’ language facing the corporation ,the public could expect that more attention to training, testing and replacing of old pipelines …and the public could bet that key transport ‘safety warnings’ would be less ‘unheeded’ !
Not knowing is not an acceptable excuse !
Carl Shalansky, P. Eng. (Retired)
Blog: https://redfern3359.wordpress.com/
(604) 986-4657