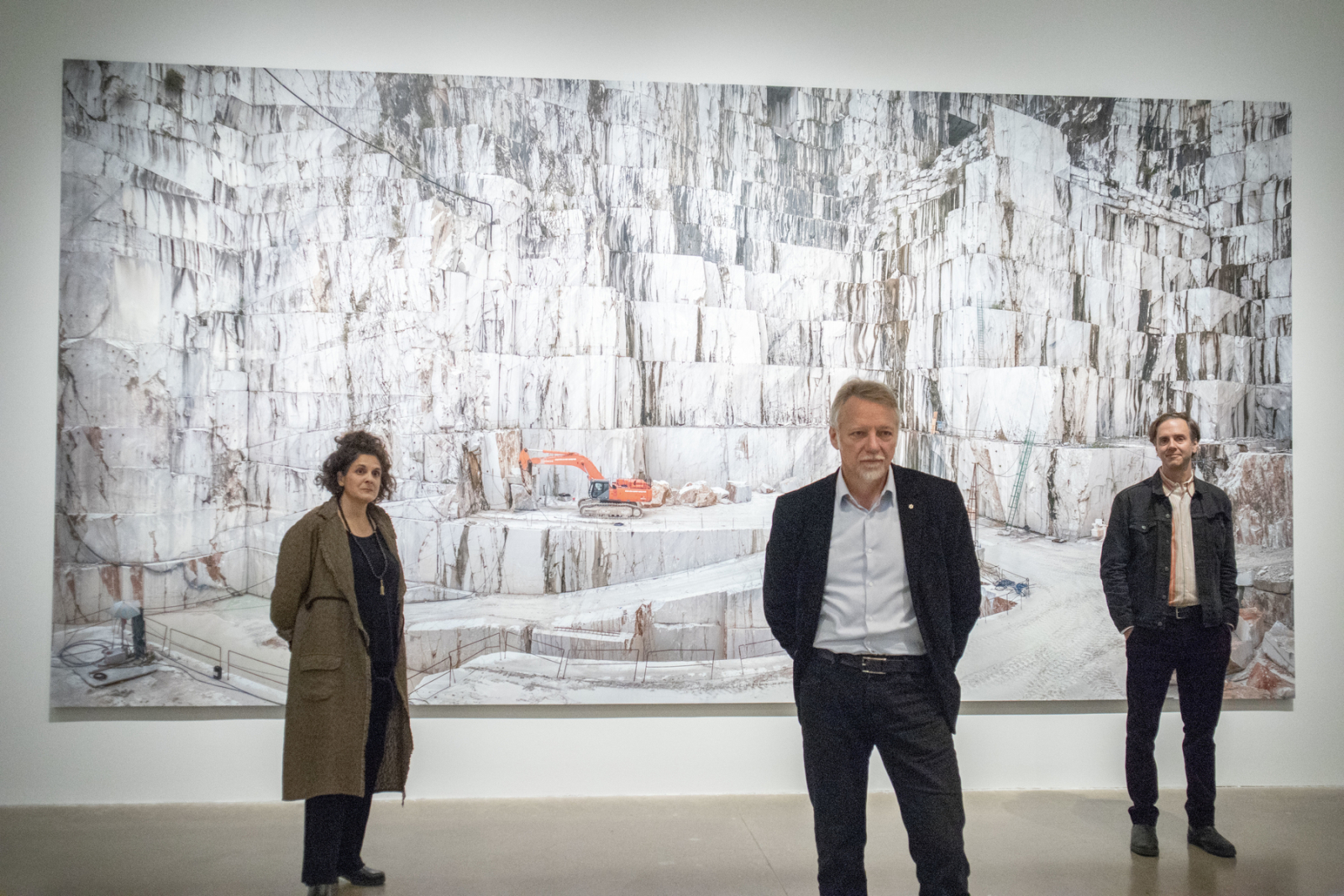 When you first walk into the Anthropocene exhibit at the Art Gallery of Ontario, you stop to watch a man with mismatched boots trudging slowly over a 50-year-old landfill just outside Nairobi, Kenya that was declared full in 2001 and shut down.

You watch the man walk through what looks like a road forming a canyon. It looks like there are mountains on either side of his path, but its actually just one great, continuous mound of discarded plastic of all shapes and colours — the cheapest material to recycle across the world. He keeps walking until he meets a few more people scavenging and sorting through the garbage landscape for small things of value.

The landfill was shut down but is still active, says the description of the video: 2,000 tonnes of waste continue to be dumped there every day. And for the 1 million people who reside on and around it, the site is a primary source of income.

The slow, extended shot is an extraordinary invocation of the goal award-winning landscape photographer Edward Burtynsky and documentary filmmakers Jennifer Baichwal and Nicholas de Pencier set out five years ago to capture Anthropocene — the name for the present day era in which humans have become the single most defining force on the planet .

"The site is undeniable," AGO curator Sophie Hackett told National Observer. Humans are responsible for the landfill landscape, she said, but we don't see that when we discard our trash. That's why I started the exhibition with this piece. Our collective responsibility to our planet hits you straight in the face, right across the bat. We are this man. We are making this space," she said.

Human destruction of the environment has, perhaps, never before looked this beautiful.

The contradiction is at the heart of the Anthropocene project, a museum exhibition in Toronto and Ottawa, a documentary film and an art book. Photographs are juxtaposed with videos and facilitated through virtual reality. The project immerses the audience in many aspects of "Anthropocene" — a term scientists coined two decades ago to mark this new and troubling climate age.

To create the project, the trio of artists went to 20 countries. They documented massive industrial landscapes from mines in Europe to irrigated fields in a Saudi Arabian desert, and the destruction of villages, a historic church, and natural land. They rode through and filmed the longest railway tunnel under the Swiss Alps and saw the largest land machine on the planet at work. They created a photographic mural of Laos, Nigeria — a city that grew from 1.4 million in the 1970s to 20 million today — in all its sprawling glory, highlighting every chaotic detail to examine in person and through an augmented reality application.

They watched the burning of 100 tonnes of elephant tusks and rhino horns by government officials in Kenya, done to send a message to poachers that the value of ivory was only in being a part of the animal that bore it.

That instance of extraordinary human activity is on display in a separate room in the AGO, where the main lights are turned off except those shining straight onto the pictures themselves. There, a dome-shaped pile of elephant tusks glimmers in three separate forms.

One is a three-dimensional virtual recreation of a pile that was burned down that allows a visitor to zoom into the identifying codes that were carved onto every tusk and horn. Another is a video projected on the wall showing the burning, with the sound of every crackling tusk and hiss of the smoke-filled air echoing through the room — it is the opening scene of the film Anthropocene: The Human Epoch, which is narrated sparingly by actor Alicia Vikander.

The @anthropocene projects is an extraordinary illustration of the severity of human impact that urges reflection, action and change. "If the planet is going down, we are going down too, and perhaps we deserve to" - filmmaker Jennifer Baichwal.

The third is a still image of the aftermath of the burning, glistening on a corner wall.

"I remember the smell," Burtynsky said in an interview. The truckloads of diesel that was poured over the tusks and horns for the burning event is hard to forget. "Ten thousand elephants lost their lives for ornaments, not even food...it's heart wrenching to see that much carnage, all for money."

Baichwal told National Observer they are bringing these environments to the public "in a way that is not accusatory or didactic, but in a way that makes you reflect on your connection."

For Baichwal, the Anthropocene project is "coming at a completely necessary time." She says she has seen the tenacity the human species can have, their dominance and their ingenuity. But, she has also seen those who are working hard at mitigating the impact of human activity.

Both Burtynsky and Baichwal urge politicians in Canada and around the world to look at their images and their film and understand that the issue of climate change and human image is an issue beyond politics.

"I am saddened by the fact that it has become political football," Burtynsky said. "It shouldn't be. Unsafe and polluted water, air, food effects everybody. You don't get a pass on that. Whether you are right, left, black white, rich poor. This is about every one of us."

Governments can do a lot and move the needle, Burtynsky added. Until then, he added, "everybody will do their bits on the grassroots level until the governments align."

Baichwal agrees and remains hopeful that with a growing number of awareness initiatives around the world — including their Anthropocene project — things will change. "It's so much unnecessary noise at a time when everybody should be mobilizing," she said.

It is not lost on the artists that there are only two instances of untouched earthly landscapes in the exhibit. One is of a forest deep in the heart of British Columbia; the other is a coral reef, photographed in complete darkness by divers and created as a composite of 200 images.

"I thought, 'wouldn't it be interesting to show that kind of intense biodiversity that may have taken hundreds of thousands of years for that wall to kind of battle out and become what it is with light suppressed into it,'" Burtynsky said. "It's a reminder of the magic of nature, that it is still among us."

"But it's not guaranteed," he added. "There's less and less of it everyday."

But around these images are reminders that as ingenuous as human activity is, it has a tendency to destroy as it creates — a consequence that is now beginning to hurt us in the form of severe climate change.


Editor's note: this story was edited at 2:35 EST on Friday Nov. 16, 2018 to accurately reflect the location of the exhibitions. We regret the error.

Unfortunately the folks we

Unfortunately the folks we have in Ottawa preach environment while they continue the rape and pillage of our environment and it's people.....but demand we pay a premium price for their addiction to fossil fuel profits.

Interesting that there is no

Interesting that there is no mention of Canada’s role in this, the Canadian mining industry, the tar sands, and we’ve just paid for a pipeline that is going to ruin the somewhat pristine west coastline. Kenya has many problems but we’re making these decisions in a wealthy, basically unoccupied landscape that continues to destroy itself, somehow spouting saving our environment. Wake up Canada!! Susan Paynter, Salt Spring Island