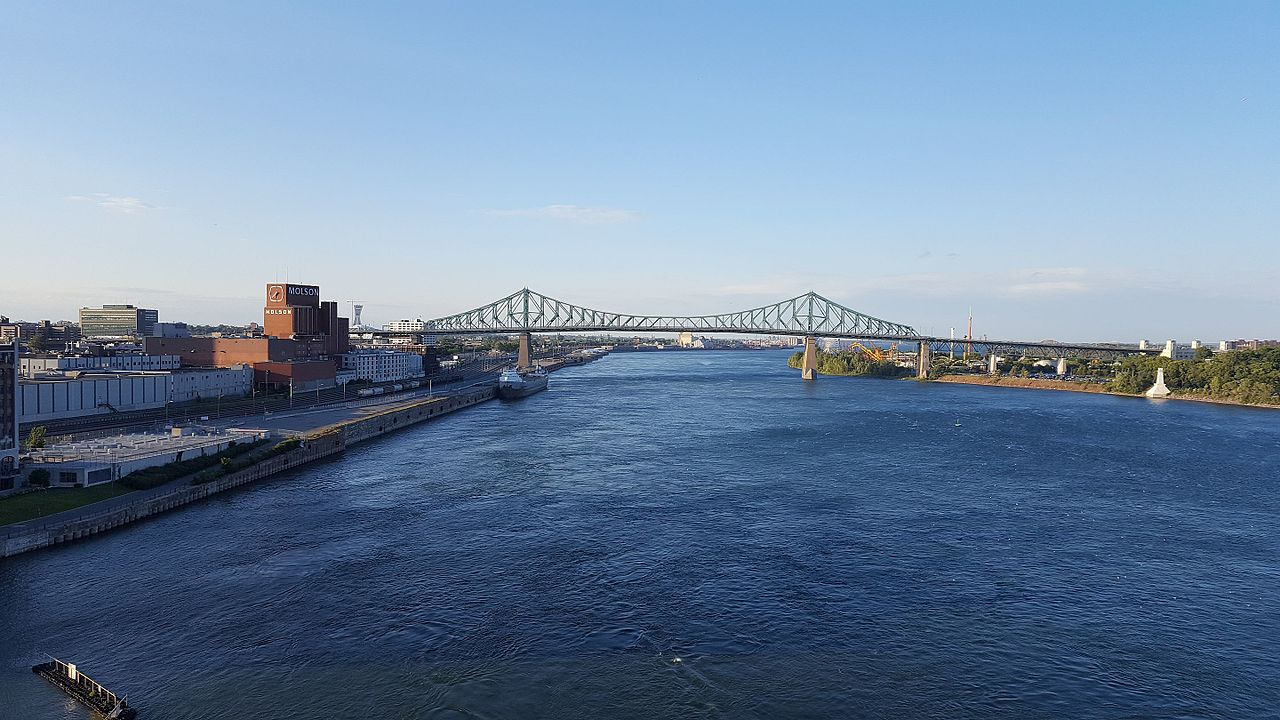 The Jacques-Cartier bridge over the St. Lawrence River on Aug.23, 2016. Photo by Johannes Meyer/ Wikimedia Commons
Previous story
Next story

Environmentalists are outraged by a "preposterous" large sewage dump into the St. Lawrence River near Montreal and a "staggering" number of smaller, chronic sewage overflows throughout the year in Quebec.

They are calling on municipal and provincial governments to be more ambitious in their attempts to monitor and mitigate the release of toxic wastewater in waterways.

The City of Longueuil on Montreal's south shore released raw sewage over four and a half days while it did maintenance work on a faulty sewage pipe running under the St. Lawrence.

Initially expected to last eight days and involve 162 million litres of untreated wastewater, the maintenance work on the pipe was completed ahead of time and finished on Monday.

Mélanie Roldan, a spokesperson from the city, told National Observer on Tuesday that the exact amount of sewage that had been released was difficult to estimate, given that the city had encouraged local businesses and citizens to reduce their water consumption over the period of the work. She said it was likely under 90 million litres of wastewater – roughly equivalent to 36 Olympic-sized swimming pools.

Raw sewage can cause short and long-term damage to wildlife and habitats that depend on the river, on top of being toxic to humans who drink it, swim in it, or participate in water sports and activities.

Mattson said that polluting rivers and lakes with sewage will have a further effect of alienating Canadians from their local watersheds, potentially reducing the number of people willing to protect them.

“The idea that Canada, which has this responsibility to protect its fresh water resources, would be so backwards, or unprepared, or willfully blind to the point that in 2018 we are still discharging raw sewage that contains our pharmaceuticals, our waste, our urine and so many other things … it just seems so preposterous,” Mattson said. He said that municipalities should not take "shortcuts" and should invest more resources into building temporary storage for sewage during maintenance work.

Dumping untreated sewage into the St. Lawrence “sends a very, very dark and negligent message to the community that the rivers and waterways don’t matter” – Mark Mattson, president of @swimdrinkfish, via @natobserver #munpol #qcpoli

"When I hear cities say it’s too expensive to protect the river and they are going to discharge raw sewage for three, four, five days, I think the general message to the public is really that the rivers don’t matter," he said.

The St. Lawrence is the outflow for all of the Great Lakes and holds nearly 20 per cent of the world’s fresh water. Roughly 45 million people depend on it for drinking water.

The City of Longueuil said in a release earlier this month that the work was timed for November to avoid fish spawning season and because it is a month with fewer nautical activities on the river.

Alain Saladzius, president of Quebec-based water advocacy group Fondation Rivières, said in a statement on Nov. 14 that he was disappointed that the government had not implemented “conditions that allowed for better practices since ‘flushgate’ in Montreal.” He referred to 2015 when the City of Montreal dumped eight billion litres of untreated sewage in the St. Lawrence; that was about one-third of the city’s total sewage output. Earlier this year Quebec City dumped 46 million litres of raw sewage in the St. Lawrence in order to do scheduled maintenance work on a pumping station.

Municipalities in Quebec are required to warn the provincial environment ministry and publicly announce when there will be a major sewage dump due to maintenance work. However, most untreated sewage released into waterways is caused by old sewage systems overflowing and is not announced and reported to the public.

In 2015, the year of ‘flushgate,’ Quebec released nearly 21 billion litres of untreated wastewater into its waterways. The amount was similar in 2017, at 21.5 billion, according to Environment Canada data provided to National Observer by Swim Drink Fish.

Most older Canadian cities, such as Quebec City, Hamilton, Montreal, Longueuil and Toronto, have old sewage systems that combine storm and wastewater in one pipe. When heavy rainfall occurs, treatment plants can’t handle the excess water and release the combined mixture into waterways. These releases go largely unreported by media, in part because they are smaller and are not accompanied by a public announcement.

In Ontario, the provincial environment watchdog recently found that combined water systems were responsible for 1,327 different instances of raw sewage overflow into Ontario’s waterways between April 2017 and March 2018.

That number in Ontario pales beside Quebec where there were 62,000 overflow instances in 2017, according to a report in Le Devoir on Nov. 16. Of that number, 51,000 happened during periods of rain or thaw.

Gabriel Cliche, a spokesperson from Fondation Rivières, called the number of overflow events in the province "staggering," explaining that "even though they are little overflows, they add up to a big amount, and that's the problem."

Swim Drink Fish's Mattson said outrage over large sewage wastewater dumps announced by municipalities like the City of Longueuil provide an opportunity to boost awareness around the other, more frequent but less publicized instances of sewage discharge – although he added that it was "perverse" state of affairs.

Swim Drink Fish, which is based out of Toronto and New Brunswick, is calling on municipal governments for greater transparency that would include notifying citizens exactly when and where releases into waterways are happening on an ongoing basis. This could be an online map that highlights sewer overflows in real-time or having signs near sewer pipes and lights that flash when waste is being ejected.

In Kingston, Ont. residents who want to swim or participate in nautical activities can refer to a real-time sewer overflow map to find out which areas are affected after heavy rainfall.

Fondation Rivières wrote a public letter to Quebec Environment Minister MarieChantal Chassé on Nov. 12 with five recommendations to mitigate the impact of raw sewage dumps in waterways. These included establishing a ministerial office for the technical evaluation and monitoring of sewage dumps; obliging municipalities to obtain ministerial permits ahead of all planned sewage dumps in waterways; ensuring a followup report after all dumps to share learnings with other municipalities; and implementing a levy on untreated sewage that would be paid into Quebec’s Green Fund.

The group suggested that the tax could be set at $1 per cubic metre of released water – meaning that Longueuil would have received a bill of $162,000 ahead of last week’s pipe maintenance.

A spokesperson from Fondation Rivières told National Observer on Tuesday that Chassé’s office had not yet responded to their recommendations.

IN 1948, my American family built a modest cottage on the banks of the St. lawrence in the 1000 Islands area. My family and friends swam, fished and even drank untreated water from the wonderusly clear, sparking flows that raced strongly through the islands. Cottages on the islands - many without sufficient soil for septic beds released their untreated waste directly into the river and drew water (upstream) from the same river for drinking and washing, as did the recreational boats that swarmed this holiday hotspot. Apparently non of them thinking about the fact that thousands of similar actions were happening all about them - adding their contamination. Worse than that we were the unknowing recipients of the toxic wastes dumped from the upstream industries that treated the St. Lawrence as their personal sewers as did many municipalities. Prior to the invasion of the foreign mussels the Great Lakes and the River turned murky. Even the bureaucrats and officials began to mutter about the visible pollution. Painfully slowly, remedial measures were implemented with municipalities being forced, reluctantly, to establish waste treatment plants, islands and vessles required to install holding tanks. Then came Love Canal and, finally. interstate/international commissions established to monitor and regulate Great lakes pollution But really it was the Zebra Mussels - a scourge in their own right, that effected the biggest visible change in the waters. To date the efforts continue but obviously, there are still miles and fathoms to go in cleaning this crucial waterway - that defines so much of Canada and the Northern and.Midwestern states.

Penny pinching taxpayers and governments have dragged their fiscal feet to such an extent that the Beluga are still classified as "toxic waste". Fish stocks have declined, most people are reluctant to consume more than token amounts of Great Lakes basin fish and since Ontario's government has disbanded its unit measuring and reporting on the toxicity of fish from local waters we have no way of determining what or how much is safe to eat. It is only now, decades, later that even municipalities miles from the river and its major tributaries are taking into consideration the potential for domestic and industrial pollution to contaminate their surface and underground water sources. This consciousness has still not penetrated to the cores of far too many people, ordinary citizens, farmers, industries, government officials. Cavalier attitudes continue to damage us - from irresposible use of pesticides and fertilizers, to the intentional "dumping" of wastes during time of flood/overflow or for "planned maintenance". Clearly not enough energy or money has been directed to this most basic and critical of human needs - clean water. All our vaunted technological prowess has still not trickled down to creating systems that are capable of avoiding these breaches of sanitation. Our existing laws and regulations are so laxly enforced that polluters continue, with virtual impunity, to dump toxins into the water and into the air and the landfills that eventually find their way into the watershed. Ask any scientist, any public health official and if they are honest, and as knowledgeable as they should be, they will admit that the ill effects on human, animal and ecosystem health are there, easy to see and to prove. Perhaps Quebec's poor record of control is born of a fatalism that they, and the Maritime provinces are the victims of the more massive pollution flowing from far upstream. What does it matter how much they add to the noxious brew? It stil has not penetrated to the stunted minds of most humans - there is nothing on this earth that remains local. Primordial systems of weather, air and water circulation ensure that in the fullness of time, and in some cases far more quickly than we have grasped, the effects of our carelessness come back to haunt us.

Did these dumping actions

Did these dumping actions take place with environment Minister Catherine McKenna's blessing?
Is dumping aokay as long as the serfs pay a carbon tax into general revenues?

Montreal sewage dump wraps up three days ahead of schedule