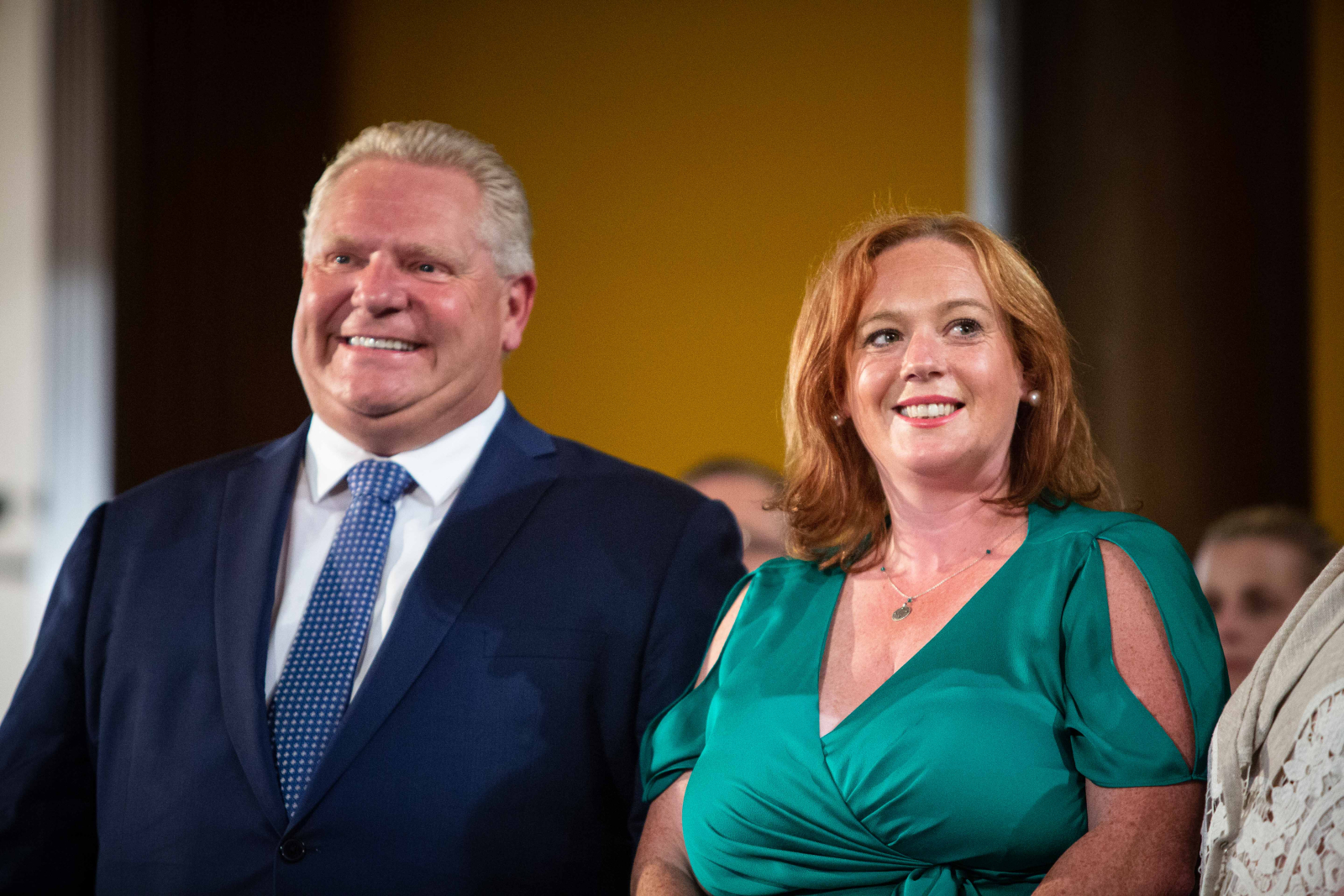 Ontario’s immigration minister attacked the Trudeau government’s policies on border crossers just days after turning down a federal offer to get briefed on the same issue, reveal newly-released internal emails.

The rejection of the offer was delivered in an email that came from an official speaking on behalf of Ontario Minister of Children, Community and Social Services Lisa MacLeod, an Ottawa-area MPP. It occurred the first week after Premier Doug Ford’s cabinet was sworn into office, and raises fresh questions about whether his government was informed about all the facts before it criticized Prime Minister Justin Trudeau's policies.

The briefing, offered at least twice in emails sent by a high-ranking federal public servant at the Privy Council Office (PCO) would have covered the work to date of a key government task force that looks at the influx of people crossing the Canada-U.S. border between ports of entry and claiming asylum. The Privy Council Office is the central department in Canada's public service that supports the prime minister.

The emails were released to National Observer in response to a request under access to information legislation.

The Ford government insists Ottawa is not doing enough to ease the burden of these asylum seekers that have crossed the border between checkpoints, where they would have been turned away under the Canada-U.S. Safe Third Country agreement. MacLeod says services are overwhelmed and the province is owed $200 million.

Canada is obliged to follow the UN refugee convention that says asylum-seekers can’t have penalties imposed on them for the way they enter a country. Trudeau referenced these “international obligations” during a meeting that same week with Ford, where prime minister said he was forced to explain how Canada’s refugee system worked after concluding the Ontario premier wasn’t informed.

Immigration lawyers also point to the tumultuous political situation in the United States, where U.S. President Donald Trump has tried to end temporary protected status for 300,000 immigrants, as a factor driving people to escape north.

MacLeod never followed up to get federal briefing

On Thursday, speaking at an announcement in Toronto, MacLeod downplayed her rejection of the briefing. She said she had been in “many briefings with the federal government since then” and had travelled to Ottawa “three times on immigration matters.”

“I don’t believe a federal briefing on the work of the task force will be necessary, but thank you for the offer," wrote an official representing Ontario Minister Lisa MacLeod, declining an offer from a high-ranking federal public servant.

MacLeod, however, didn’t leave the impression that she was interacting frequently with federal government officials when she said during a speech at Ottawa City Hall in September that she had been "trying to have a conversation with the federal government about their failed border policies."

The minister also wasted no time attacking the Trudeau government for its "irresponsibility” on immigration during her first week in office. On July 6, she suggested Trudeau “can choose to work us or he can choose to work against us.” That was three days after someone representing her rejected the federal briefing.

Under Canada's Constitution, immigration responsibilities are shared between the federal and provincial governments.

From the beginning, MacLeod has said Ottawa is not “enforcing” rules around immigration. She said she has asked federal officials to “protect the border” and “ensure there’s greater accountability and integrity in the system.”

In addition to the $200 million she continues to claim Ontario is owed, she also wants to see faster turnaround times to process asylum seeker cases, to determine if they are accepted as refugees.

The Ford government was sworn in on Friday, June 29. That evening, MacLeod tweeted a photo of briefing binders on the wide variety of issues — among them immigration — that she had become responsible for. “When four ministries become one! Lots to read this Canada Day weekend!” she wrote in the tweet.

The emails that followed show how the high-ranking public servant working for the federal government at the Privy Council Office tried and failed to offer MacLeod a briefing.

On Saturday, June 30, at 7:53 p.m., Christiane Fox, deputy minister for intergovermental affairs and youth at the PCO, reached out to someone representing MacLeod to invite her to a July 4 meeting of the Ad Hoc Intergovernmental Task Force on Irregular Migration. Fox said the meeting would take place from 5-6:30 p.m on Parliament Hill, but that the minister could join by phone.

“As you know, the federal government, along with (Quebec) and (Ontario) participate in these ministerial meetings and recently (Toronto) Mayor (John) Tory has also been invited to take part in the task force,” Fox wrote.

“Our understanding is that Minister Lisa MacLeod will be the responsible minister and we wanted to send her the invitation below. In addition, we would like to offer to brief her in the coming days on the work of the task force if that could be helpful.”

Fox ended the email by acknowledging that “we realize there are a number of files requiring attention during the first few weeks following swearing-in therefore please do not hesitate if you have any questions or concerns.”

It appears the deputy minister didn’t hear back during the Canada Day weekend. On Tuesday July 3, at 10:47 a.m., Fox wrote again, following up on the offer. “Good morning,” she wrote. “Just checking in on this request, any news on your end? Thanks.”

About a half hour later, at 11:19 a.m., someone writes back to Fox. This person’s name has been blacked out from the federal access to information request under a provision of the law that allows for personal information to be removed.

“The minister is being briefed this afternoon. We will advise afterward on her intent regarding the Task Force meeting invitation,” the person wrote.

“I don’t believe a federal briefing on the work of the task force will be necessary, but thank you for the offer.”

PCO is responsible for supporting the task force. Stéphane Shank, PCO media relations manager, confirmed the briefing for MacLeod “did not take place.”

Shank said the briefing would have covered the role of the task force and its mandate, and provide “a summary of discussions to date.” Officials would also be available to “answer any questions the minister may have had prior to her first meeting.”

'I hope he will apologize'

It also included senior officials from the federal government’s transport, public safety, border security and immigration departments, as well as the PCO and the Prime Minister’s Office.

Hussen emerged from the meeting the next day saying he was ready to work with the Ford government and MacLeod in particular. “I told her that I look forward to working with her, as we move forward together,” he said outside the House of Commons.

The next week, MacLeod did not stand with Hussen at a different immigration meeting, called the Federal-Provincial-Territorial Forum of Ministers responsible for Immigration, on July 13.

Hussen said the Ford government was being "irresponsible, divisive, fear-mongering and not Canadian” and attacked MacLeod for not appearing with him. “I can see the (Ontario minister) is in the room but not joining us at the podium,” he said. "It's not too late minister, I encourage you to come and join us.”

MacLeod said after that Hussen should apologize. “What I saw today was an attempt of [Hussen] calling me un-Canadian, which I take great offence to and I hope he will apologize and reconsider his language. I also won’t be bullied into accepting what the federal government is doing because we do have severe and significant challenges [in Ontario],” she said.

After Blair became the minister responsible for border security, Hussen was removed from the task force and Blair became the lead federal government representative. MacLeod said she was “encouraged” by that.

- with files from Fatima Syed

Lisa Macleod reminds me of my

Lisa Macleod reminds me of my father-in-law who was losing an argument about technical matters with his three adult sons and he ended the fracas by announcing, "My mind is made up - don't bother me with the facts!". The argument ended but the sons spent the rest of the evening hooting, hollering and teasing their father about his unfortunate riposte.

The entire Ontario PC Caucus came to office with their minds made up - inconvenient facts be damned.