By Tracy Sherlock in News | December 5th 2018
#908 of 1260 articles from the Special Report: Race Against Climate Change 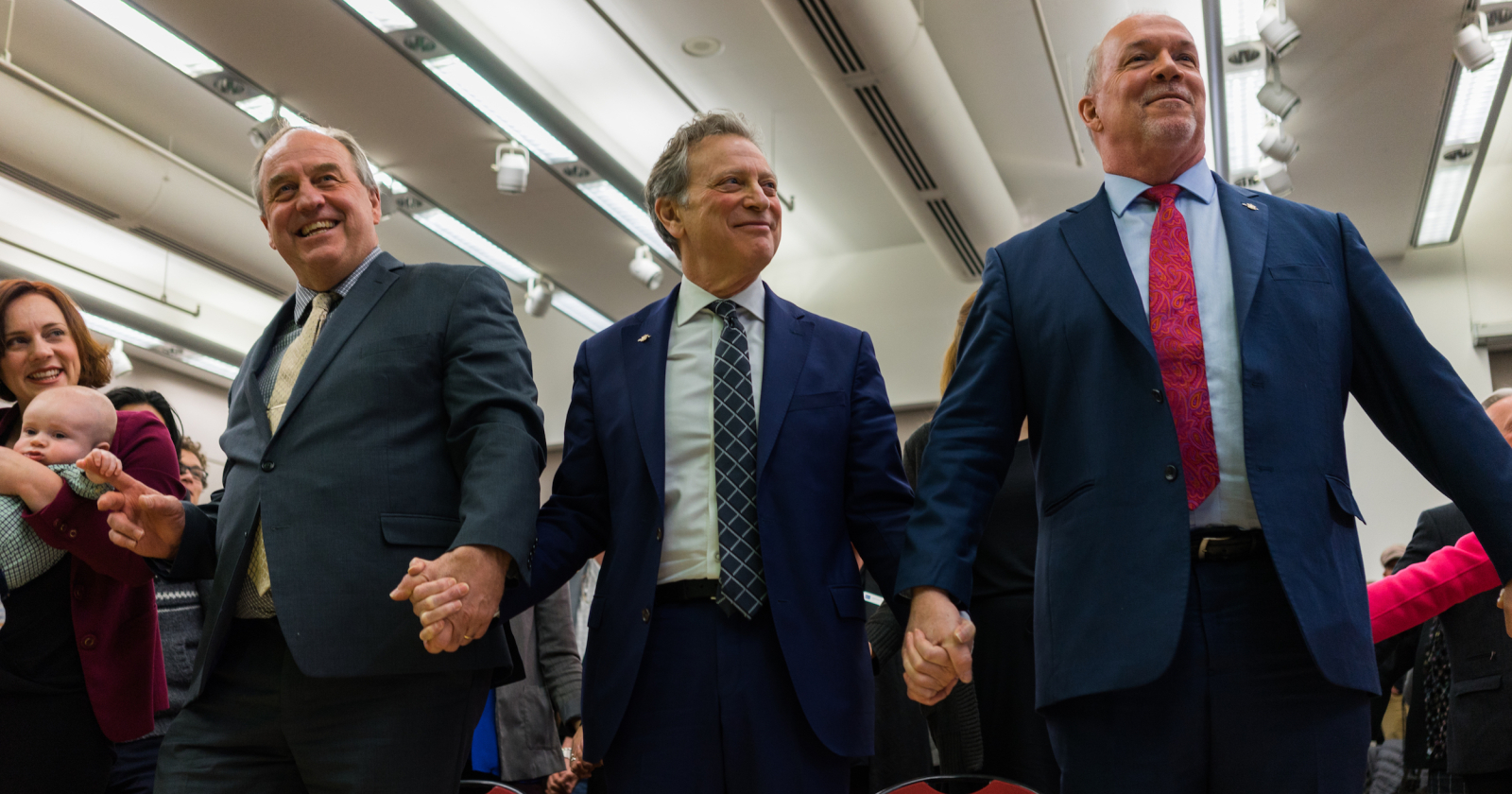 B.C.’s new plan to reduce carbon emissions in the province will require changes in how we drive, where we live and how industry operates.

Premier John Horgan today announced CleanBC — a strategy to reduce emissions by 40 per cent by the year 2030. The plan only accounts for three-quarters of the required reductions, with the rest to be announced over the next two years and the financial details will not be available until the provincial budget is released in February. Nonetheless, environmentalists and business representatives applauded the plan as a good first step.

“With CleanBC, British Columbia is rising to the challenge of climate change,” Horgan said. “By moving to clean, renewable energy — like our abundant supply of B.C. electricity — we can power our growing economy and make life better and more affordable for British Columbians.”

B.C. has seen unprecedented wildfire seasons over the past two summers, as well as devastating flooding and droughts. The United Nations has warned that drastic cuts to emissions need to be made by 2030 to limit global warming.

Although the costs of the climate strategy will not be announced until February, Environment Minister George Heyman said it would be “fully funded.”

“This isn’t a choice between the economy and the environment,” Heyman said. “That’s a false choice and it’s one we just don’t have to make.”

The province’s carbon emissions today are about 60 megatonnes.

The lion’s share of the reduction will come from industry, where emissions must be reduced by 8.4 million megatonnes, largely through the electrification of oil and gas operations, a pilot project on clean trucking in the Lower Mainland and providing incentives to industry through existing carbon tax revenues.

Four megatonnes will be cut by switching to cleaner fuels at the gas pump. The low carbon fuel standard will be increased to 20 per cent by 2030. Some of this can be accomplished by increasing the amount of renewable fuel that is blended with liquid fuels.

New buildings will be required to be more energy efficient and there will also be funding to renovate and retrofit older homes, which the plan says will cut two megatonnes. The plan calls for 16,000 homes to be updated each year.

Plans to reduce residential and industrial organic waste will save a further 0.7 megatonnes.

Last month, the government announced that by 2040, all cars sold in B.C. will be clean energy vehicles. That, combined with more charging stations, will cut 1.3 megatonnes by 2030, the government said.

There will be incentives for industry, incentives for homeowners and incentive for people buying electric cars, but none of the details of those programs were announced today.

Plan's goal is to make B.C. the cleanest place in the world

The goals of the plan are to make B.C. the cleanest jurisdiction in the world, while the province’s industry remains competitive, even during the transition, reporters were told in a technical briefing.

This plan is missing about one-quarter of the cuts that will be required to meet the target by 2030, but the government says it will announce those plans over the next 18 to 24 months.

B.C. will need to increase its electricity production about eight per cent to meet these targets — an amount about equal to the demand from a city the size of Vancouver, reporters were told in a technical briefing.

Horgan was asked if this will mean a Hydro rate increase.

“We are working as hard as we can to keep rates down,” Horgan said.

When asked about recent protests in France over rising fuel taxes, Horgan said B.C.’s economy and unemployment rates are the best in the country and the plan shouldn’t mean any downsizing. Rather, the plan includes training for people to learn the construction and mechanical skills to work in the clean construction and zero emission vehicle fields.

Andrew Weaver, leader of the B.C. Green Party and Horgan’s power-sharing partner, said this plan puts B.C. on the path to be a world leader.

“This is not only a climate plan, this is an economic plan,” Weaver said. “This is about sending a message to the international community that B.C. is going to rise to this challenge.”

CleanBC was announced at an event attended by hundreds of environmental leaders, business people and government representatives. The material given to the media includes supporting quotes from federal and American politicians, Indigenous leaders including Grand Chief Stewart Phillip, and many representatives from business, labour and environmental groups.

“With other provinces faltering on climate action, B.C.’s climate strategy brings hope for all Canadians concerned about the wellbeing of their families and communities,” said Karen Tam Wu, the BC director of the Pembina Institute.

Stephen Cornish, CEO of the David Suzuki Foundation, said most British Columbians know climate change is harming us now and we need to respond.

“Today, the B.C. government delivered phase one of a plan that repositions the province as a Canadian climate leader,” Cornish said. “British Columbians can be proud to be at the forefront of landmark solutions for transportation and renewable energy.”

“The CleanBC plan has some of the strongest climate policies in North America and British Columbians should be proud,” Berman said. “The recent UN report makes clear that we cannot expand fossil fuels and ensure a safe climate. There is still hard work ahead for British Columbia in the second phase of the plan to reduce emissions from industry and I look forward to working with this government to address this challenge.”

Later, in an interview, Dan Woynillowicz, policy director for Clean Energy Canada, said he thinks British Columbians can have confidence in the plan, particularly because it is comprehensive and has clear goals and timelines.

“You’re never done. You have to put these things in place and then keep turning the dials again,” he said.

The federal government has indicated it may be willing to pay for some of the electrification of remote oil and gas operations, he said.

Regarding the missing 25 per cent that is still required to meet the 2030 targets, Woynillowicz said they will be in sectors like cleaner buses, more improvements on waste and even greater electrification of industry, but that the government is still working out the best ways to do those things.

“We will be watching to ensure that the climate advisory council has sufficient budget and capacity to do its work, can set interim sectoral targets and has the ability to revise pollution reduction targets in future in light of the latest science,” Vernon said.

The plan calls for annual reporting of spending, results and anticipated emission reductions, as well as forecasts for emissions for the next three years.

Feeling proud to be a denizen

Feeling proud to be a denizen of this beautiful province...solid climate leadership in action!

That Mr. Horgan, Mr. Trudeau and Mr. Weaver have all embraced LNG/Fracking tells us commerce definitely trumps our environment/planet. Horizontal, hydraulic fracturing is an integral component of the LNG industry. There is nothing whatsoever environmentally friendly about fracking. It is a constant negative force on our land, air and water. Mother Nature is in serious trouble and politicians continue to spin the lies. As long as they keep smiling we're supposed to believe all is well. It is not!

I'm definitely concerned about fracking too. While I think the climate plan is a good start, I agree there are still lots of concerns.

What this plan doesn't allow

What this plan doesn't allow for is the demotivating effect of LNG development when individuals and businesses are asked to make sacrifices and new investments. Why should we take action when any gains are more than offset by the new emissions from LNG?

Good question. Thanks for

Good question. Thanks for reading.

I doubt BC Industry will be

I doubt BC Industry will be too pleased to find they have to cut back substantially with huge investments in cleaner technology while the LNG industry expands to fill in most of the gains made with their own carbon footprint. As noted in the comments, the carbon footprint of this industry is not the only environmental concern raised by LNG. Personally, I think Canada's petroleum output should be gradually reduced to domestic consumption levels, while government investment incentives directed towards new sustainable technologies build new economic activity, while removing all petroleum industry subsidies. Some of these investment incentives should go to help Alberta get off its addiction to petroleum royalties. Domestic consumption levels should be lowered with programs to replace high-carbon activities with low carbon alternatives. I see bits and pieces of such a coordinated approach in some places, but no consistent application at any provincial level or at the federal level.

There is a lot to consider

There is a lot to consider here, definitely.

Oh my yes, how wonderful. We

Oh my yes, how wonderful. We private consumers will be legally shouldered with the burden of trying to meet these goals under threat of financial penalty while industry will swear (in the pages of the corporate press) that they're doing their, oh my goodness yes, best and the oil and gas industry touts clean coal, clean dilbit, clean petcoke, clean profits and oops sorry about the mess, see ya. The best we can hope for is that somehow a few examples of the best humanity has ever produced survives us, some Mozart some Shakespeare some Michelangelo some of Trump's philosophical writings, so we don't appear to future generations of intelligent arachnids or extra-terrestrial visitors to have been merely an accidental species of suicidal idiots.

Much of the intended cuts to

Much of the intended cuts to emissions will come from the electrification of the oil and gas industry, although it remains to be seen who will pay for that.

There are so many intentions

There are so many intentions paraded before us it's wonderfully meaningless.

Thank you Dana Still. Genuine and sincere caring about our planet's future is damn rare.....

I don't know how to take that

I don't know how to take that.