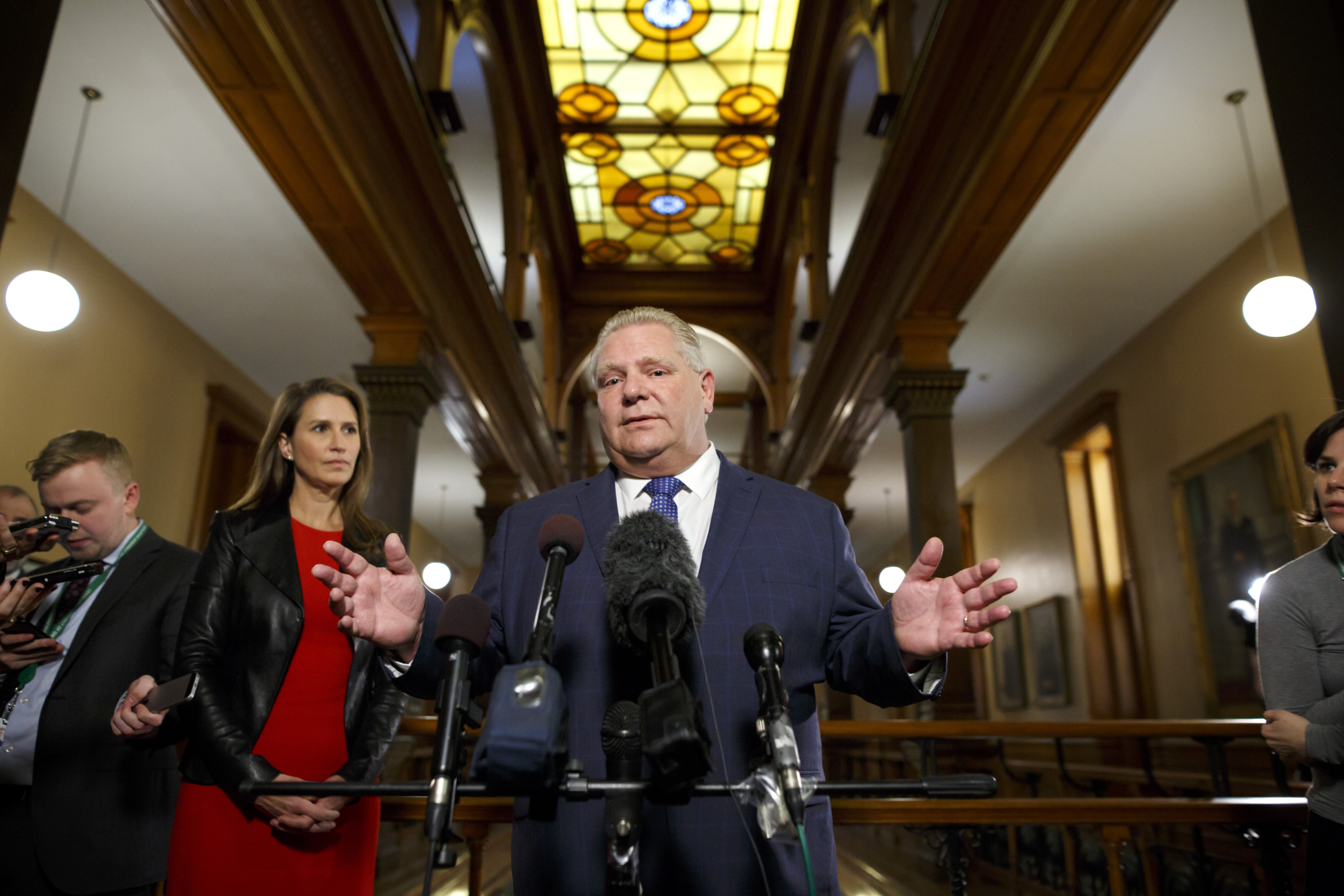 Ontario Premier Doug Ford addresses the media outside of his Queen's Park office in Toronto on Monday, November 19, 2018. Photo by Cole Burston
Previous story
Next story

As the two party leaders intent on knocking Kathleen Wynne out of the premier’s office this year talked about their plans for Hydro One, regulators in Washington were watching and listening.

And they were becoming increasingly concerned that a merger between Hydro One and Spokane-based Avista Corp. would always be at risk of political interference. This risk ultimately was at the heart of their decision Wednesday to deny Hydro One’s bid to buy Avista, putting an end to a deal that was more than a year in the making.

As members of the Washington Utilities and Transportation Commission saw it, according to an order issued Wednesday, Premier Doug Ford’s Progressive Conservatives would fire and replace Hydro One’s board of directors. (It did.) And Andrea Horwath’s NDP promised to reduce electricity prices by returning Hydro One to full public ownership. At the end of April, NDP MPP Peter Tabuns told The Toronto Star that Hydro One’s profits could be used to foot the bill.

Mayo Schmidt, Hydro One's CEO at the time, told commissioners on April 10, 2018 that concerns about the provincial government's role were not "valid".

“The province’s role is limited to being Hydro One’s largest shareholder,” he said, adding, “Hydro One is not any more vulnerable to political change than any other investor-owned utility in Canada, or the United States for that matter.”

But the commissioners, who regulate private energy companies in Washington state, appeared to have their doubts, announcing instead that they would torpedo the deal.

“The reassurances Mr. Schmidt offered in his testimony may have been given sincerely at the time it was filed but they turned out to be materially incorrect,” the commissioners wrote in their order this week.

The Ontario government has a 47-per-cent stake in Hydro One. Reviewing the series of events that followed Ford’s win, the Washington commission concluded, “Hydro One lacks sufficient independence from its former owner and now largest shareholder, the Province of Ontario, to be a reasonable and appropriate merger partner for Avista.”

One of Ford’s first moves as premier was to force out Schmidt and the 14-member Hydro One board. His government hailed the leadership changes at Hydro One as a "great day" for the province.

At the time, Ford said under Hydro One's previous leadership, Ontario residents were forced to choose between "heating and eating" while "connected energy insiders" were getting rich. He also warned it was threatening businesses' competitiveness in the province.

"Those days are done," Ford said.

The now defunct deal with Avista was the first time the Ontario utility had embarked upon the acquisition of a U.S. utility.

Avista serves residents of eastern Washington, northern Idaho, Oregon and Alaska, including 383,000 electricity customers and 348,000 natural gas customers. According to a Hydro One website explaining the merger, the deal would have made Hydro One one of the biggest energy companies in North America, translating to potential cost savings for consumers.

But for Washington decisionmakers, the risk was too high. They also noted one of the key negotiators – Schmidt – was now out of the picture.

“The events following the provincial election in June 2018 demonstrate the material and significant risk of the proposed transaction to Avista’s customers that results from the Province of Ontario’s dominant ownership interest in Hydro One and the willingness of the provincial government to exert its dominance in ways that are contrary to the best interests of Hydro One and, by extension, Avista, were it to be owned by Hydro One,” the order says.

Hydro One issued a short statement late Wednesday, saying it and Avista were “extremely disappointed in the UTC's decision, are reviewing the order in detail and will determine the appropriate next steps.”

In an emailed statement Wednesday, Energy Minister Greg Rickford said “Our government will always stand up for the largest shareholder of Hydro One, the people of Ontario. We are confident that the renewed leadership and direction at Hydro One will make responsible business decisions that are in the best interest of their shareholders.”

This legislation, specifically, appears to have worried Washington state commissioners who had been mulling the Hydro One-Avista merger since September 2017.

“This new law gave the province a direct and active role in setting, and continuing oversight of, executive compensation at Hydro One,” the commissioners wrote. “There appears to be nothing that would prevent this level of interference from occurring again if the government leadership becomes dissatisfied in some regard with decisions by the new board of directors or with the new CEO, or simply due to political considerations without regard to sound business practices.

“Indeed, additional legislation may be forthcoming to effectuate a 12 per cent rate reduction promised by the new government. In other words, Hydro One continues to be subject fully to the provincial government and the political will of its leadership.”

Green Leader Mike Schreiner said Wednesday night he was never a fan of the Avista deal.

However, he said, "No one can blame U.S. regulators for having doubts about a business deal that would leave a major utility vulnerable to political meddling."

In a statement Wednesday afternoon, Liberal MPP Mitzie Hunter said “the fact that (Ontario’s political interference in Hydro One) could even be a factor is a disgrace.”

“The message from this decision should be clear to the premier: stop meddling at Hydro One,” she said, adding that Ford’s “reckless conduct” was damaging the province’s interests.

“Doug Ford needs to understand that processes are in place for a reason. Vindictiveness and cronyism are no way to run a province.”

I don't think I would ever

I don't think I would ever agree with Ford on anything, but cleaning house at Hydro 1 was one that I supported. I'm not impressed with a public utility going on an acquisition spending spree. That smells of empire-building and should not be allowed of a public utility. I'm with Mike Schreiner on not liking the Avista deal, and I think the US regulators did us a favour on this one. Why didn't Ford kill the deal as part of his sweep of Hydro 1? Let Hydro 1 concentrate on the job of serving Ontario. That's more than enough for most of these blow-hards.

Well, what a kettle of stinky

Well, what a kettle of stinky fish. From what is contained in this article it is difficult to parse the original motivations for the merger in the first place (merger for the sake of growth, economic power and a hazy promise of savings for consumers?) The existing uneasy balance of power in Hydro One, is clear. Is it a public utility or a public/private utility with the private part focused on private profit??

Would the merger enhance the private profit or the public benefit? If anyone believes it could accomplish both their understanding of private equity capitalism is faulty.

Every where in the capitalist dominated world this tug of war between private profit and public interest is being waged. The absolutist pronouncements of the benefits of privatization of public benefit utilities/corporations has proven to be nothing but a power grab, predatory profiteers, taking advantage of the public investment in infrastructure when mismanagement, coupled with political agenda maneuvers put the publicly owned utility in unfavourable, politically dangerous economic waters.

The false narrative that profit driven corporations are neccessarily more efficient has been amply disproven with epic failures/scandals driving national and even global financial meltdowns. On the public benefit side one has to look no further than Detroit and its potable water debacle - a hideous blend of privatisation and political interference.

I am beginning to think that there is simply no human capacity for coping with the intense complications of "mega" capitalism, or "mega" government. Human overpopulation is driving the entire human race into ungovernable, unsustainable disorganization. In the face of such overwhelming complexity humans are paralyzed and reduced to the expedient of narrow, personal existentialism, or extreme political regimentation.

It is not only the "markets" that hate uncertainty, the human race has never evolved to the point where it can mentally encompass extreme complexity or uncertainty.

The global paralysis in the face of extreme climate disruption is ample evidence.

Is that Caroline Mulroney I

Is that Caroline Mulroney I see watching her political aspirations die?