'You're a liar': Indigenous people voice anger at Trudeau town hall in B.C. 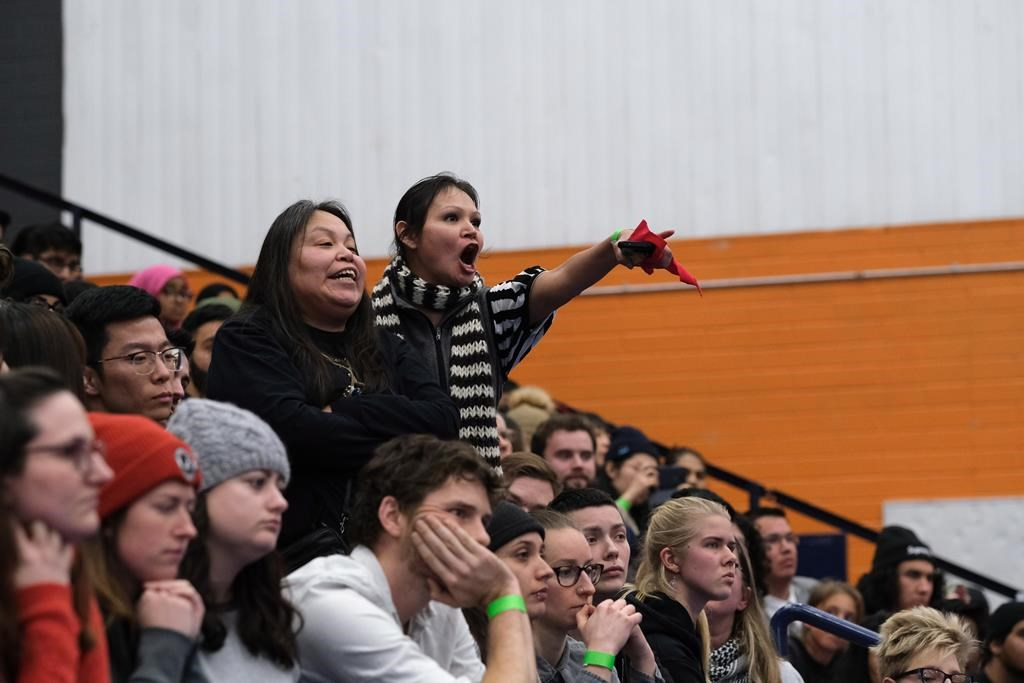 Indigenous people voiced their anger and frustration with Prime Minister Justin Trudeau on Wednesday at a chaotic town hall in Kamloops, B.C., loudly interrupting him to condemn the arrests of protesters at a pipeline blockade.

While Trudeau was answering a question on accountability for the oil and gas industry, a man who identified himself as Will George stood up and began to yell that the prime minister had lied about wanting reconciliation with First Nations.

"You're getting people arrested," George said. "You're a liar and a weak leader. What do you tell your children?"

Trudeau calmly asked George, several times, to sit down and allow him to finish answering the question. After several minutes, the man apologized and sat down, to applause from the crowd.

RCMP arrested 14 people Monday at a pipeline blockade in northwestern B.C., sparking protests across the country. Demonstrators on both sides of the pipeline debate appeared at Trudeau's events in Kamloops on Wednesday.

Trudeau fielded a variety of questions at the town hall, but his fiery exchanges with Indigenous people dominated the event. When he called on a First Nations woman in the crowd, she asked him what he would do to stop oppressing her people.

"When are you going to give us our rights back?" she asked, to cheers and applause.

The prime minister replied that Canada has a "long and terrible history" with regards to First Nations, but his government is working toward reconciliation and met with Indigenous leaders to discuss self-governance on Tuesday.

"It will take time to improve (the relationship), but we are making significant progress," he said.

"No, I'm not," Trudeau replied. "I am ready to walk in partnership with you and building the future and that is what we've been doing ... I understand the anger and the passion that you have about protecting your land."

After a lengthy exchange in which the woman continued to press him on how he allowed the arrests to happen, Trudeau said it was possible the woman was "not listening" to him and he tried to move on. Members of the crowd continued to occasionally yell, with one crying out, "Shame on you!"

Later, a man who identified himself as Arnie Jack from the Shuswap Nation said Canada does not have a deed to its territory and has no right to build the Trans Mountain pipeline expansion through its lands.

Jack described the arrests in northern B.C. as a "national disgrace."

"Do you have a deed to Shuswap territory? Have you brought one here tonight to impose your jurisdiction on us?" Jack asked.

"No, I did not," Trudeau said, adding that having a "deed" is an old way of doing things and instead he wants to move forward in partnership with Indigenous Peoples.

Several audience members raised concerns about climate change, including a 65-year-old woman concerned about her grandson's future. She said she had spoken with environmentalist David Suzuki, who was critical of the Liberal government's handling of the climate.

"There is no question we're in a time of difficult change," Trudeau replied, but he added that his government is moving forward with a price on carbon and there are tremendous causes for optimism, and that's where he disagrees with Suzuki.

"I'm just a little more optimistic than he is," Trudeau said.

Speaking to supporters at an earlier Kamloops event, Trudeau touted the benefits of the $40-billion liquefied natural gas project at the centre of the impasse with First Nations.

In a campaign-style speech at the Liberal fundraiser, Trudeau did not address Monday's arrests at a protest against construction of a natural gas pipeline by Coastal GasLink, which is a key part of the LNG Canada project. He instead heralded the massive project as one of his government's top achievements.

"We moved forward on the LNG Canada project, which is the largest private sector investment in Canada's history, $40 billion, which is going to produce Canadian LNG that will supplant coal in Asia as a power source and do much for the environment," he said.

The RCMP enforced a B.C. Supreme Court injunction on Monday that ordered the removal of any obstructions to the pipeline project in and around the Morice River Bridge on a remote forest service road southwest of Houston.

The pipeline company says it has signed agreements with all First Nations along the route but demonstrators say Wet'suwet'en house chiefs, who are hereditary rather than elected, have not given their consent.

Trudeau also told Radio NL that "we're going to have to do a better job" of dealing with First Nations rights and title.

"There's still work to be done right across the country in terms of having the opportunity for Indigenous communities to strengthen their governance models," he said.

Dozens of protesters on both sides of the debate gathered outside the hotel where the fundraiser was held.

Keith LaRiviere, who is Cree and participated in the yellow-vest protest, said he knows some of the people involved in the pipeline blockade.

He said he supports their right to protest but he believes those building the pipeline also have the right to do their work.

On the other side of the hotel parking lot, a group of Indigenous protesters opposed to the pipeline sang, drummed and held a banner reading "PM Trudeau: Canada needs climate action now."

Trudeau/Horgan have a Tiger by the tail.

Trudeau says B.C. protest arrests not 'ideal,' but rule of law must be respected