B.C. Premier Horgan sees 'no quick fix' to questions of nationhood as support grows for Wet’suwet’en 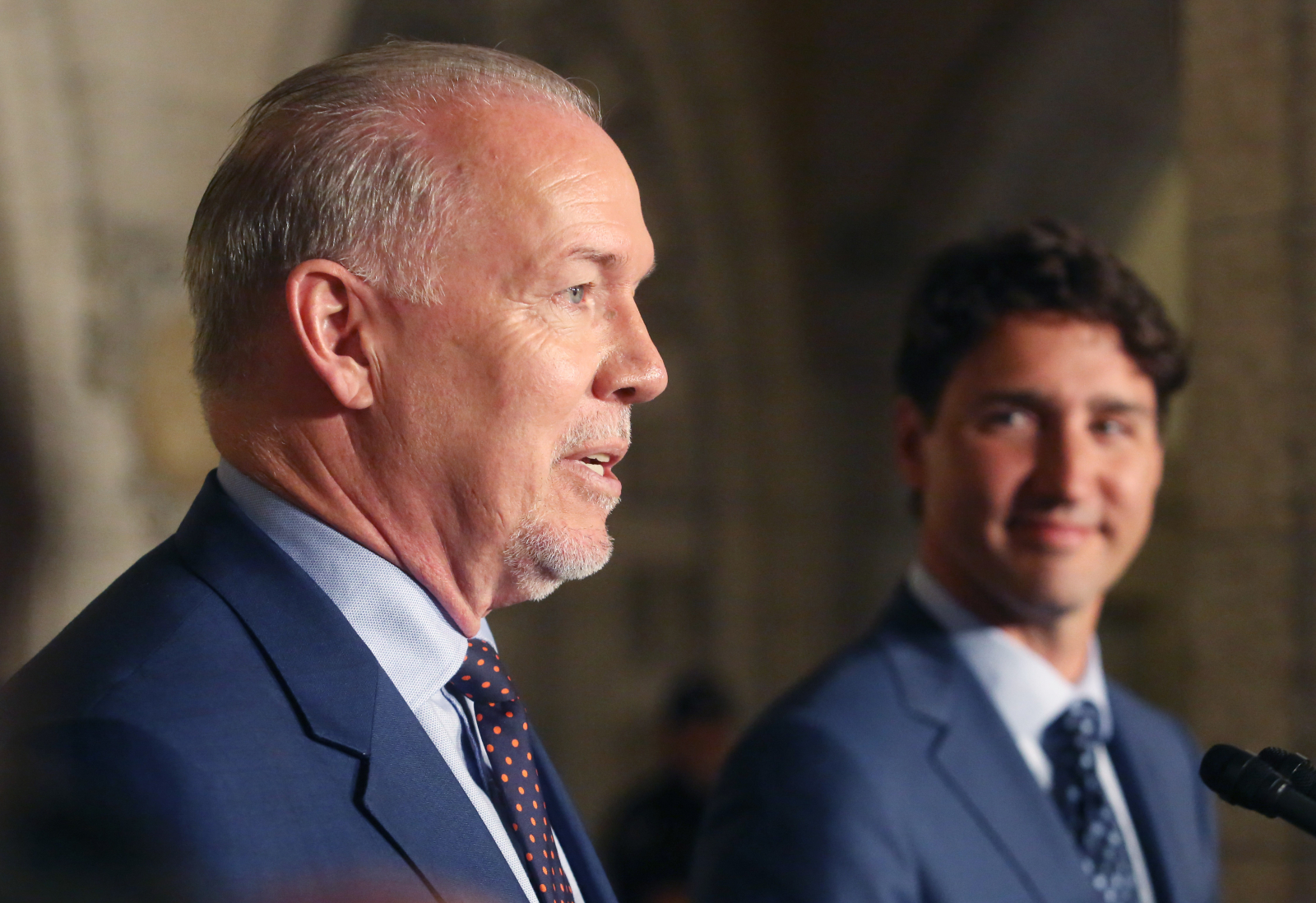 B.C. Premier John Horgan speaks to media as Prime Minister Justin Trudeau looks on in outside the House of Commons in Ottawa on July 25, 2017. Photo by Andrew Meade
Previous story
Next story

Premier John Horgan of British Columbia said on Wednesday that he sees “no quick fix” to the surging Canadian question about territorial rights as a First Nations group and law enforcement clashed in a remote northern part of the province this week.

Horgan, in his first public comments since Royal Canadian Mounted Police moved against an Indigenous blockade of a pipeline project earlier this week, said there are just not straightforward answers to be had as Canada wrestles with a question touching energy policy, historical record, and national identities.

He also said he saw in the broader solidarity movement coalescing behind the blockaders those who had out-of-jurisdiction fights to pick.

Support for the Wet’suwet’en caused Prime Minister Justin Trudeau to delay a speech and change its venue after a long column of protesters charged into the original venue in Ottawa on Tuesday. He eventually addressed the invited Indigenous leaders at a different location, without referencing the breached blockade, and without taking questions from reporters.

Horgan, the New Democrat premier of the coastal province, said that his government believed it had met its obligations to consult with Indigenous nations in approving TransCanada's Coastal Gaslink project by receiving the "free, prior, and informed" consent that is referenced in United Nations declarations on indigenous rights to which has Canada committed.

The premier said that he had spoken with the prime minister and they had agreed that the province was unique in the federation because of the amount of unceded territory it contained.

Unceded territory refers to land upon which inhabitants lived when colonial visitors arrived who never came to a formal agreement with them. Horgan has also been described as the premier of "so-called" British Columbia in some tightly-edited video montages that have been posted online in recent days.

Other Indigenous representatives in similarly unceded parts of the province confronted Trudeau in Kamloops on Wednesday, with Will Geoge, a guardian of a Watch House erected to watch over a Trans Mountain terminal site in Burnaby, calling the events in Wet'suwet'en territory "unacceptable."

Geoge, a member of the Tsleil-Waututh Nation, was one of those drawing a direct link between his own nation's experience with the Crown with that of the Wet'suwet'en hereditary chiefs, title holders and land defenders at Gdimt'en and Unist'ot'en.

"This is the same fight as the fight to stop Trans Mountain's disastrous diluted bitumen pipeline and tanker project. The risks are too great — we can not and we will not allow them to destroy our way of life," he said. "No means no."

"Indigenous peoples in Canada have been more than generous in sharing, in fact, we have been left with almost nothing. That is why we must protect the little we have left," he said.

Last month, TransCanada Coastal GasLink requested and received an injunction that was similar to the one granted to Kinder Morgan (the previous owner of Trans Mountain prior to the government's offer to purchase the pipeline and related assets) at the Trans Mountain tanker terminal and tank farm cite on unceded Tsleil-Waututh territory in Burnaby last year.

Meanwhile, a pro-pipeline convoy of oil rig trucks and other vehicles that is critical of Trudeau's policies for not doing enough to support the oilpatch, is now hoping to reach Ottawa. The group has been raising money on a Gofundme page for fuel and other expenses. The pro-pipeline advocates have gotten support from an oilpatch industry lobby group, the Canadian Association of Petroleum Producers, which has been running advertising for the fundraising efforts on Facebook through a page that it manages called Canada's Energy Citizens.

Back in Victoria, Premier Horgan sought to draw a balance between extending an olive branch of honest negotiation with the hereditary chiefs of the clans of the Wet'suwet'en First Nation which are not in agreement with their nation's elected chiefs in consenting to the project and stressing his government believed it had done all it needed to do to approve the project in good faith.

All the nations "from well-head to waterline" had agreed, he said.

But within those 20 First Nations whose traditional territory the Coastal Gaslink pipeline snakes there are also 13 houses and five clans, and the hereditary chiefs — those whose authority is passed down generationally rather than granted at the end of some form of selection or election process — don’t always agree with the elected officials. The different groups and systems have brought varying levels of authority to the territory. A lot of these systems were uprooted when the land was settled by European immigrants.

In this case, members of the Gidimt'en clan of the Wet'suwet'en's Unist'ot'en (Big Frog Clan), which has for the past decade maintained a camp that enforces their territorial rights and last month received an injunction to cease blocking access to Coastal Gaslink pipeline builders.

Editor's note: This article was updated at 5:49 p.m. ET on Jan. 9, 2018 to correct that B.C. Premier John Horgan's news conference was held in Victoria, B.C. It was updated again at 11:48 p.m. ET with additional background and comment from another First Nations representative and details about a pro-pipeline convoy.

Prime Minister Justin Trudeau said, “While governments grant permits it is communities that grant permission.”
The nose is continuing to grow.

Here's a quick fix, Horgan. Recognize the inherent rights and title of indigenous people and act accordingly. In the case of the Wet'suwet'en territories, Canada broke it's own laws by issuing an injunction and invading another nation. It's as simple as that, but you like to make it seem complicated so you can continue to do the wrong thing and to please your corporate masters.

Hey Look what we have for you

Hey Look what we have for you! niceoffer
Are you in?

Imamul Haque Imu Hey Look what we require looking for you! gentlemanlytender
To qualify click on the tie up lower than beneath http://bit.ly/2SStPCN