The NDP crisis and Singh's leadership 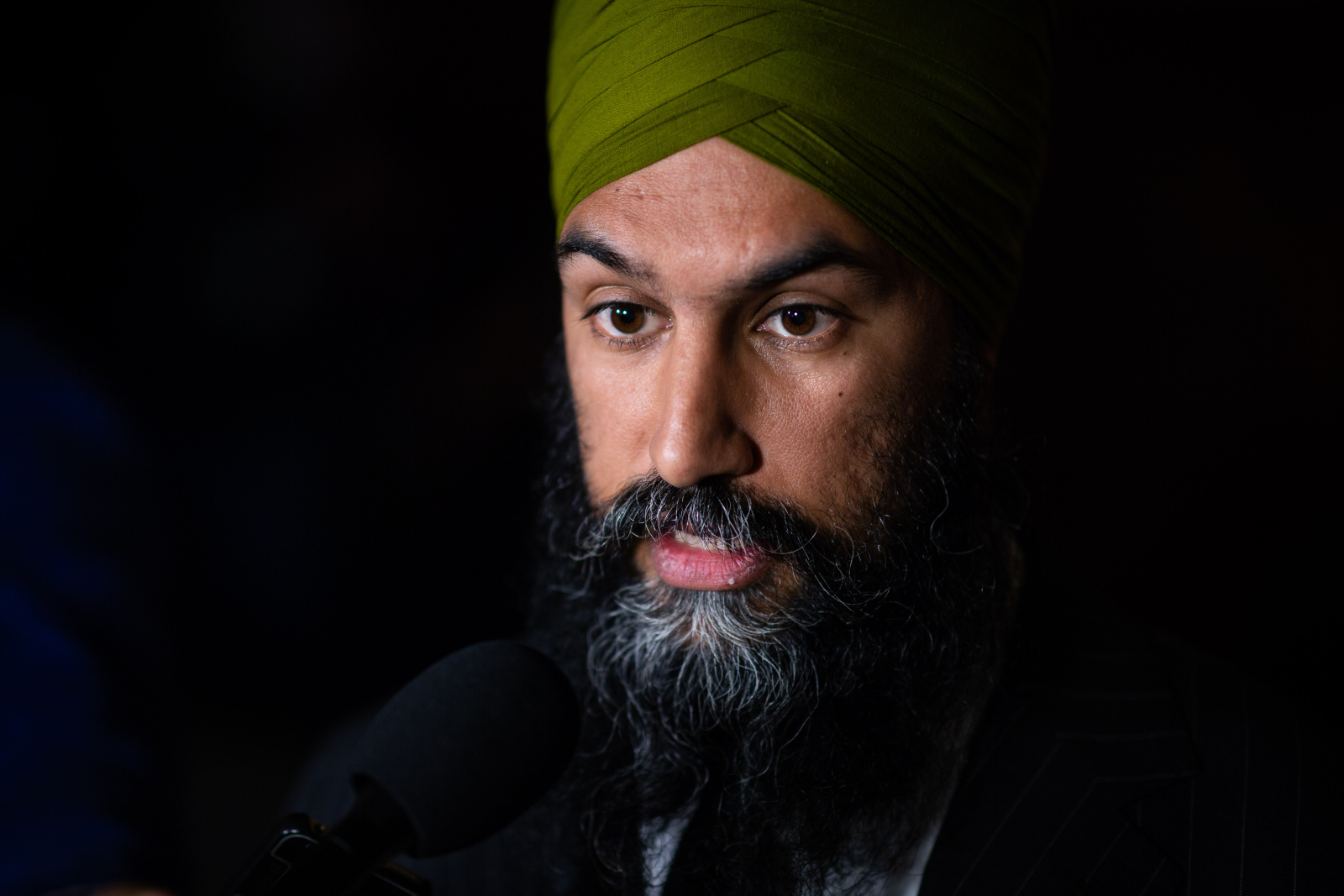 Backroom grumblings about the state of affairs in the NDP have grown louder among party insiders amid criticism of leader Jagmeet Singh, who seeks a seat in the House of Commons in a byelection in the B.C. riding of Burnaby South on Feb. 25 .

Singh, elected party leader in 2017, is the first racialized leader of a major political party in Canada. The former Ontario NDP legislator won the leadership campaign in a landslide on the first ballot. There is little doubt that his candidacy attracted renewed interest in the NDP, especially with young racialized Canadians. But the promise of Singh reinvigorating the party with new members was overblown. Despite the thousands of new members signed up, membership numbers remain below 2012 levels.

The party began to shed members after 2012, and especially after the 2015 election. The decrease in party membership long preceded Singh, and the new members he did bring in barely stemmed the bleeding.

The 2015 election saw the NDP blow an early lead, in part by committing to balanced budgets and refusing to take aim at the rich, giving the Liberals the opportunity to paint themselves as the party that would tax the wealthy and engage in deficit spending. After Mulcair was turfed by the displeased membership, the head of the United Steelworkers pushed a motion from the convention floor to postpone the party’s leadership contest until 2017. The motion passed with disastrous consequences. The party floundered, losing members and money.

This was the situation Singh came into. He was not some firebrand radical. His politics mostly reflected mainstream NDP policies. He was notable for being an outspoken opponent of carding and for standing up on racial justice issues. He also was an early supporter of the Fight for $15 and Fairness campaign for a minimum wage increase, going beyond the Ontario NDP’s halfway support for certain $15 and Fairness demands.

On most issues Singh was firmly in the center, drawing on existing NDP networks to draft policy and strategize. Much of his policy team was drawn from the Broadbent Institute, a pro-NDP social democracy lite think tank. Singh was deputy leader of the Ontario NDP when they ran on a pro-austerity election platform in 2014.

He has fudged on the question of pipelines. During his leadership bid Singh eventually came out against the pipeline, but then proceeded to waffle on this commitment by giving conditional support for it later. Only after the Liberals announced in May that they would buy the Trans Mountain pipeline did he forcefully oppose it. Singh has voiced support for the LNG pipeline in B.C., despite opposition to the pipeline from Wet'suwet'en hereditary chiefs. His stance on the LNG pipeline mirrors the NDP’s long history of an approach to respecting Indigenous sovereignty that is selective at best.

Orange wave was an anomaly

The inability of the NDP to strike a bold course in policies or messaging is nothing new. It is the reason the Liberals consistently eat the NDP’s lunch come election time. The federal Liberals introduced sweeping changes to federal labour law this fall — a $15 minimum wage, equal pay for equal work, and three paid sick days — for federally-regulated sectors. Where was the NDP? Why didn’t they get out in front of this and champion these ideas long before the Liberals? Yes, the NDP did back a $15 minimum wage for the federal sector in 2015, but they quickly stopped talking during the election after the Liberals criticized it.

"It would be unwarranted to lay all the blame on #NDP leader Jagmeet Singh." #CanPoli

NDP strategists seem to have a hard time understanding the difference between having a stated policy and being a megaphone for an issue. What is the point of having a technical fix if there is no political will or support to enact a change? Why aren’t they leading the charge for migrant workers rights, for free tuition, for dental care, for taxing the rich, for a green new deal? In short, where are their big ideas? This problem is much bigger than Singh.

The NDP has not been helped by a major rift between the British Columbia and Alberta NDP governments over the Trans Mountain pipeline.

Without a seat and facing anemic poll numbers, there were even rumours of a potential caucus coup against Singh if he were to lose the Burnaby South by-election.

Since Liberal contender Karen Wang stepped down after making racist comments, the likelihood of that happening is next to nil.

The probability that the NDP suffers major defeats in the 2019 election appears high. Donations are way down, and the political agenda advanced thus far by the party is vague at best. And who will end up shouldering the blame? For many this will come down to Singh. There is no doubt he and his team bear a certain amount of responsibility for the NDP’s current problems.

But it would be unwarranted to lay all the blame on Singh. There is a real danger that heaping blame solely onto Singh could open the door for racist conclusions about the first racialized leader of a mainstream party in Canada. From the get-go, during the leadership contest there were grumblings in the NDP about new faces and fake memberships in the party.

The 2011 orange wave, when the NDP won enough seats to form the official opposition for the first time in history, was an anomaly, partly due to a collapse in Bloc Quebecois and Liberal support in Quebec. Canadian and world politics is even more polarized now than in 2011. The NDP has no hope of repeating those results by pursuing a politics of centrism and moderation.

If the NDP wants to win, it must organize itself around a bold vision on the left that aims to shape the terms of the political debate in this country. Failure to do so shouldn’t be put on Singh alone, but instead on the entire party apparatus which has for years been stubbornly committed to a politics that fails.

I couldn't agree more. If

I couldn't agree more. If all the voices on the left can do is mimic neo-liberal ideology...or raise a timid voice for obvious reform needs like the $15 minimum, then the NDP is irrelevant. But a lot of the problems we face, and the issues than need championing are real........and real people will join a movement that isn't afraid to say so. The Bernie Sanders campaign in the USA illustrated that quite nicely....if anyone on the left was paying attention.

Climate change is real and moving quickly. Unconventional fossil fuels are creating havoc and displacement all over the planet...imagine a frack machine in your kids' schoolyard, Americans have had to; imagine a spill like Kalamazoo, the most expensive inland clean up in American history; imagine wildfires that move so fast they kill you in your bed, that's paradise in several parts of the world already.

And then there's tax havens, carbon taxes that exempt the polluters, greenwash and promises sent forward to our grandchildren, lies about why renewables will never be enough, foot dragging on any subsidies to sustainability, avoidance of dealing with obscene subsidies to old technology.

Let's not forget agriculture and the clean up operations of Monsanto and friends; the corporate BS about GMO's feeding the world, Nestle's ground water thefts.

And how about the arms trade, our cozy relationship with Saudi Arabia; our silence on US unilateral embargos on Iran and Venezuela? Let's not avoid the injustice being perpetrated in Palestine, while pseudo-progressives look elsewhere. Real champions of social justice don't do that avoidance walk.

It's not as if there isn't a large and neglected terrain for the NDP to occupy. It seems to be rather that we've swallowed the same short term strategies for avoiding reality that keep free market rip and ship operations flourishing.

But if that's the case, the party is irrelevant....and the people fighting for the future will abandon us.

I don't think the NDP really

I don't think the NDP really recognizes non-Union workers, so they wind up being influenced in favour of big companies directly, instead of by donation. They support agribusiness over family farms. All their fundraising appeals just assume that we are in a tax bracket and can get a 75% refund, which really turns off keen young donors the next spring. Their disdain for Palestine can't help with "the racialized" either. They seem to support almost any environmental crime, provided the company has a Union. They have not even been particularly Socialist for a long time, although as a businessman, I suspect that the banks hurt any province they control. Also, they don't answer their mail. Even my MP seems to have gone to ground.

I really don't like this term I'm seeing more & more often -- "racialized." It implies that the person(s) being referred to were once ... what? ... and then they got "racialized" like it was something done to them. Surely there are better words could be used.

I don't like it either. It's much like the misuse of "sexualized," which I'm seeing a lot of these days.

What was wrong with "racial minority"?

David. Good analysis. there is nothing New or Democratic with the NDP. Socialist is no longer a dirty word.
Bernie Sanders should be our guide. Justin promised, "Real Change" and he lied but he is only the Cheerleader for the Liberal Estabish.The NDP now has so Much AMMO of Lib.lies. It is noteworthy how the Media is dumping on Jagmeet. What are they afraid of ? is it the Unknow? Jagmeet doesn't even talk to us. Ridiculous chants are "Renewables NOW" & "Oil in the Soil" What about 5 million cars? Rachel must upgrade deadly Dilbit to create Jobs JOBS JOBS and win an election. Jagmeet needs to memorize UNDRIP and learn more about pipelines. Nobody can get through to him or whoever are HIS TEAM ? ? Activists are fixated on DONATE to our project now. What about "ripping Wind Turbines out of the ground." That's not OUR project. Remember Canada helping to restore Democracy to Haiti because Aristide won by only 92%.
Now Canada has JOINED the US sanctions of Venezuela oil exports and food imports. Remember the last US coup attempt that was " Not to be Televised." ? Where is Jag? By the way he will win in Burnaby.