Tories are 'joyous' about departure of 'feared' Trudeau advisor

By National Observer | News, Politics | February 18th 2019
For subscribers
#116 of 138 articles from the Special Report: Secrets of Government
Fund this Report 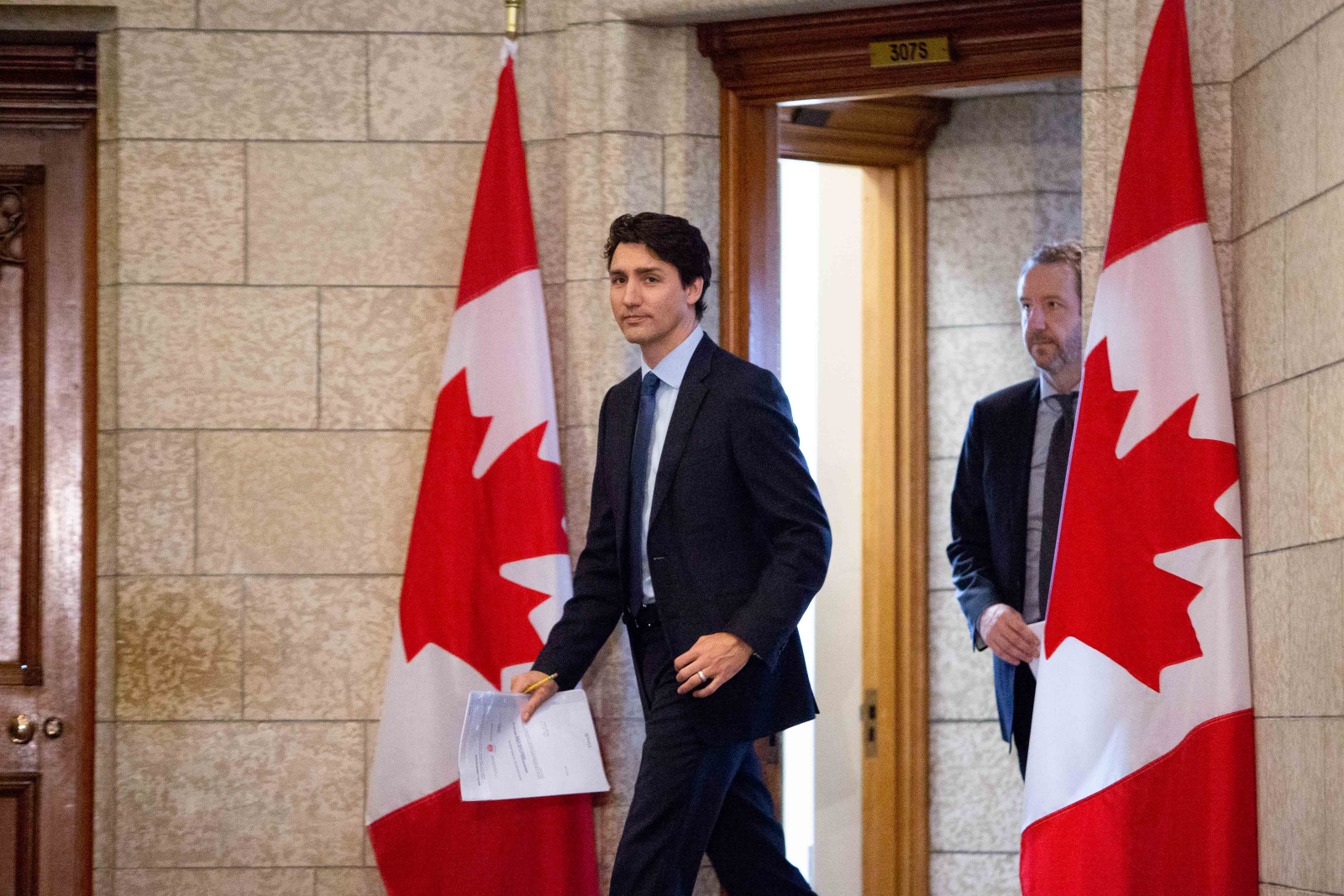 Prime Minister Justin Trudeau walks from his office into an emergency cabinet meeting in Ottawa on April 10, 2018 as advisor Gerald Butts looks on. File photo by Alex Tétreault
Previous story
Next story

Federal Conservative MPs were gloating on Monday following the resignation of a key advisor and friend of Prime Minister Justin Trudeau in the midst of a political crisis.

Gerald Butts, Trudeau's principal secretary and long-time friend, announced he would be resigning due to a scandal that has rocked the Trudeau government. The departure instantly provided more fuel to the political turmoil that has engulfed the prime minister's office ever since a report in the Globe and Mail this month about the prosecution of Quebec engineering company SNC-Lavalin on corruption charges. The newspaper report quoted anonymous sources who alleged that Trudeau's office had pressured former attorney general Jody Wilson-Raybould to intervene in the criminal case against the company, which employs thousands of people across the country.

The Conservatives pounced on the news that Butts, a key member of the prime minister's inner circle, was leaving, less than a week after the resignation of Wilson-Raybould as minister of veterans affairs.

"The latest resignation shows a gov't in chaos as Trudeau desperately tries to cover up this scandal," Conservative Party of Canada Leader Andrew Scheer wrote on Twitter, a few hours after the news broke. "Canadians are rightly concerned about the allegations of political interference in a criminal prosecution. Trudeau needs to stop hiding behind other people and come clean."

This latest resignation shows a gov’t in chaos as Trudeau desperately tries to cover up this scandal. Canadians are rightly concerned about the allegations of political interference in a criminal prosecution. Trudeau needs to stop hiding behind other people and come clean. https://t.co/4yneSa0dVP

Other MPs, such as Calgary-area MP Michelle Rempel, piled on with their own attacks, while making light of the situation.

And in a video that appeared to have been filmed outside in a residential neighbourhood, an excited Ottawa-area MP Pierre Poilievre invited people to sign a petition calling on the prime minister to waive attorney-client privilege to allow Wilson-Raybould to speak about what she knew about the situation.

"This is a massive new development," Poilievre said. "Gerald Butts has been the entire brain power behind Justin Trudeau and it was all of his brain power and authority that directed Justin to win the last election and over the last several years as prime minister. He would not be leaving the job if this were not extremely serious."

Manitoba Conservative MP Candice Bergen also suggested that the government was "in chaos."

Butts is a long-time political strategist, who also served as chief executive officer of conservation group WWF-Canada prior to joining Trudeau in his bid to win the leadership of the Liberal party and the 2015 election. Butts also made a point of ending his resignation statement by stressing the importance of taking action on climate change since it will be the most important issue from today that future generations will judge us on.

Major question: who is running Canada now? It sure as heck isn’t Trudeau. pic.twitter.com/MLBlVMeqTb

A government in chaos https://t.co/RwFGmuo4Tt

Andrew MacDougall, an ex-spokesman in the office of former prime minister Stephen Harper, explained why Tories might appear to be gloating.

"Political staff give an unholy amount to the job, especially in the PMO," MacDougall said on Twitter. "You can’t properly explain the grind to someone who hasn’t been there. Anyone who serves there deserves respect. The reason so many Tories are joyous today is because they feared (Butts)."

"Playing at the highest level in politics isn’t always easy," Byrne wrote on Twitter. "Partisanship and politics aside (Gerald Butts) has had tremendous success at numerous levels. I’m happy to call him a friend and wish him & his family good luck in whatever comes next."

Political staff give an unholy amount to the job, especially in the PMO. You can’t properly explain the grind to someone who hasn’t been there. Anyone who serves there deserves respect.

The reason so many Tories are joyous today is because they feared @gmbutts.

Playing at the highest level in politics isn’t always easy. Partisanship and politics aside @gmbutts has had tremendous success at numerous levels. I’m happy to call him a friend and wish him & his family good luck in whatever comes next. #cdnpoli

SNC-Lavalin has been aggressively lobbying all politicians to push for a plea bargain that would allow it to avoid a criminal conviction that would result in it being banned from bidding on federal government contracts for a decade. This lobbying has included private meetings over the past year with Tory Leader Scheer and NDP Leader Jagmeet Singh, as well as meetings with officials from the prime minister's office.

Curiously, the Conservatives aren't saying whether they would have said "no" to a deal with SNC-Lavalin if they were the ones in government. Instead, Scheer's deputy leader, Toronto-area MP Lisa Raitt, is suggesting that they'd be more transparent about any decision to help the company avoid a criminal conviction.

"You have to have the debate at cabinet and if a deal were to be made it would be made and the Canadian public would know what the deal was instead of trying to use the office of the prosecutor to do it through the back door," Raitt told CBC's Wendy Mesley in an interview that was broadcast on Sunday.

.@AndrewScheer was lobbied by #SNC-Lavalin too. If he were PM would he want a deal cut to avoid a trial? @lraitt tells me her party would have handled it differently. But would they have said no to a deal? #CBCTheWeekly #SNCLavalin #cdnpoli pic.twitter.com/dZUZFUfeyn

Meantime, Singh, the NDP leader, has joined Green Leader Elizabeth May in calling for a public inquiry to get to the bottom of the scandal.

Scheer said in a statement that his party would continue to press for a "thorough and public investigation" by the House of Commons justice committee and that all other options remain on the table to get answers.

Maxime Bernier, who was previously in the Conservative caucus and a minister in Harper's cabinet before forming his own political movement called the People's Party of Canada, said that "crony capitalism" is the real problem. He also said in a tweet that the Tories would have done the same thing as Trudeau's Liberals, but "more openly."

Editor's note: This article was updated at 7:02 a.m. on Feb. 19, 2019 with additional comments by Candice Bergen and Maxime Bernier.

You give uncontextualized space and credence, and thereby absolution, to some Conservative politicians whose time on the government side of the House was marked by some of the most egregious contempt for Canadian democratic norms this country has ever seen.

This is a heinous disservice.

I agree Dana. If the Cons

I agree Dana. If the Cons were in power there would be no scandal. It would have been done on a phone call.

Considering many of us

Considering many of us remember Brian Mulroney’s brown manilla envelope, Karlheinz Screiber, Michael Sona, misdirecting voters to nonexistent polling stations, and multiple other crimes against democracy under Stephen Harper, I hardly worry about this. Why? Because these conservatives would also be the first to cry out about the loss of thousands of jobs for Canadians, the threat to loss of pensions for thousands of Canadians, loss of so much. These “crimes” of SNC Lavalin were perpetrated many years ago when the conservatives were in power. It is common knowledge that bribes are the way businesses work in many countries...airbus anyone?
I am disgusted by the gamesmanship being played against the Canadian people by both the conservatives and the NDP. The pot calling the kettle black. Immature boy games by those who have never had to worry about paying bills and raising a family. These pretty boys are never home to look after their own families, just keep dumping on those who do. Grade school antics by boys in short pants, Lisa Raitt and her ilk too. My stomach turns over this name calling by insincere jerks who have already proven they would and have done worse, Pierre Poilievre, and Michael’s bosses who never owned up to their hidden secrets, 407 lists, calls to voters not telling truthfully who they were. I received one of those calls from the con men pretending to be someone else. Disgusting grade school antics.

"Loss of jobs?" There's only

"Loss of jobs?" There's only one engineering firm in Canada? Taxpayers paying inflated costs because corruption is okay? Really?