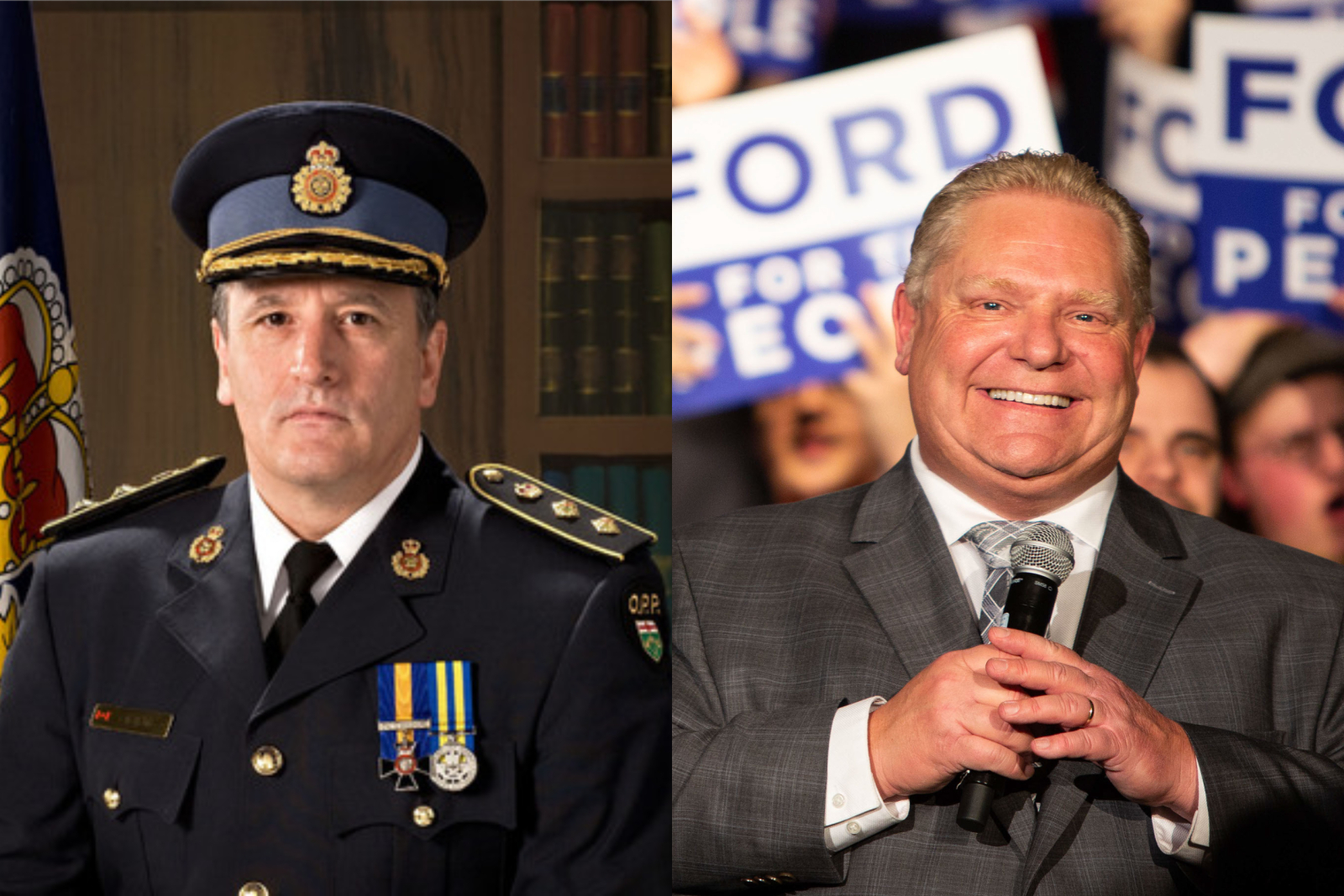 A friend of Ontario Premier Doug Ford has withdrawn his name from consideration to be the head of the Ontario Provincial Police amidst a political interference scandal.

A spokeswoman from the premier's office said that Toronto Sgt. Ron Taverner, a long-time friend of Ford, would no longer be up for the OPP commissioner's job hours after a feisty news conference hosted by lawyers for a recently fired senior police officer who had accused

In a letter sent to Community Safety Minister Sylvia Jones, Taverner, 72, wrote that he was withdrawing due to the "controversy" surrounding his initial appointment by the Ford government, after it had changed the job criteria, allowing him to qualify.

"The decision is not an easy one for me to make," he wrote in his letter. "I believe the OPP requires new leadership and a change in culture at its most senior levels... I am grateful to have had the confidence of the government and believe that my 51-years in law enforcement would have provided me with the experience and leadership skills to do the job of commissioner in a way that would have served the interest of the public and front-line police officers in the best way possible."

On Monday, former interim OPP commissioner Brad Blair was fired after a 33-year career with the force, which he said was in direct response to him blowing the whistle on Premier Ford's plans to have the force obtain a $50,000 van equipped with a television, Blu-ray DVD, and mini-fridge, and appointing his longtime friend Ron Taverner as head of the police service.

Blair also alleged that the government inappropriately tried to place Taverner into the province's top policing job, lowering the job criteria so that Taverner would be eligible. (Blair had been in line for consideration for the job, had applied, and was passed over.)

Ford responded to Taverner's letter with a statement that thanked his friend for his service and noted his desire to reform policing services.

"Since the beginning of this process, our objective has been to bring new leadership in order to address many long-standing and systemic issues that have existed for some time within the OPP; I am concerned about the countless negative stories I have heard directly from front-line officers. As far as our rank and file officers are concerned we must do better," Ford said.

"We need a new vision for the OPP; one that puts the interests of our front-line officers and the safety of the people of Ontario as its primary focus, above all else. Bringing about this kind of change at the OPP will require new leadership and it will not be easy, but it is necessary."

"Ladies and gentlemen, if you want to know what abuse looks like in 2019 the firing of Brad Blair is a walking poster child for abuse of power." Lawyers detail how the Doug Ford government fired Ontario's top cop without due process. #onpoli

In a Tuesday statement, Blair said his termination was "an attempt to muzzle me."

It was his lawyer's turn on Wednesday, with Julian Falconer saying Blair's termination was "bizarre:" it happened without the due process required by the Police Services Act. It was, Falconer said, a clear "abuse of power."

Falconer made his remarks in an over 40 minute-long conference call with reporters at the same time as the prime minister's friend and strategist Gerald Butts was providing testimony in Ottawa.

"Ladies and gentlemen, if you want to know what abuse looks like in 2019 the firing of Brad Blair is a walking poster child for abuse of power," Falconer said.

"God help you if you cross the premier, that's the message," he added. "When the premier comes knocking, you open the door and do the work, or you lose your job."

In his statement, Blair accused deputy community safety minister Mario Di Tommaso of a conflict of interest in the whole saga leading up to his termination.

Di Tommaso, who used to be Taverner’s boss when he served with Toronto Police, was also a member of the three-person hiring committee that appointed Taverner to the top provincial cop position.

Blair called this a conflict of interest in his initial request for investigation by the provincial ombudsman in December. The request was denied and has since become the focus on ongoing legal proceedings.

"I brought the serious issues of real and/or perceived political interference with the independent operations of the OPP to the provincial ombudsman because the cost of a compromised OPP is too great a price to pay," Blair wrote in the statement released by Falconer.

"The OPP can be called in to investigate provincial politicians, and the citizens of Ontario need to have faith that the OPP is truly independent, above political interference, and free from abuses of power."

On Wednesday, Falconer told reporters in a teleconference the entire saga was a "sorry mess," and "legally embarassing" for the government.

The government has repeatedly denied any political interference in Blair’s termination, with Community Safety Minister Jones saying the decision was made by Di Tommaso and approved by the nine-member public service commission.

But Falconer insisted that too many "mercurial" actions have been taken by the government them to claim they did not interfere in the matter.

“This stinks to high heaven,” he said. "They're making it up as they go along."

In his court filings, Blair said Gary Couture, the interim comissioner, met him early Monday morning at police headquarters in Orillia, Ont., where Di Tommaso was waiting for him.

In the 10-minute meeting, Blair was given a letter of termination which said that he had "ruptured the trust on which the employment relationship is built."

This was a reference to a Dec. 28 letter written by Di Tommaso about Blair's release of internal communication. In it, the deputy community safety commissioner asked Blair to comply with proper procedures in the future.

Blair was given some time to get his personal belongings before leaving the police building.

Couture's office has made it clear that the firing was not his call. Falconer told reporters that Couture is on Blair's side of this saga and that the premier "and his minions" are on the other side.

Falconer said there was another layer of conflict in the role the deputy attorney general, Paul Boniferro, played in the matter. Boniferro is a member of the public service commission who approved Blair's termination, and was also on the hiring panel that approved Taverner's appointment.

The premier has yet to comment on the saga. He has been absent from the last three days of the legislature's question period.

All three parties have requested various probes into the matter. The Liberals have called on the legislature's justice committee to summor Di Tommaso for questioning at its next meeting Thursday. The NDP have called for a public inquiry into the whole situation, as has the Green Party.

Doug Ford is exacting a revenge plot against a distinguished officer who has been instrumental in uncovering the extent of Ford’s dangerous meddling and political interference into the OPP.
Ontario families deserve answers — we need a full public inquiry. #TavScam #onpoli https://t.co/gLqwFQPylp

Falconer says the process for firing a police officer is outlined in the Police Services Act, but the government did not heed it. The act demands that a police office be given reason for his or her termination.

Falconer believes that the government is avoiding a hearing that would reveal these reasons and that's why Blair wasn't offered proper due process. He refused to disclose what next legal steps he may taking in the affair.

"They simply want to remove him as an obstacle to the Taverner appointment," he said.

Blair's termination came via a cabinet order, Falconer noted. "He continues to be, legally, a sworn police officer."

"He is devastated and his family is devastated," Falconer said. "He was summarily fired in an outrageous fashion...he is absolutely undeterred."

"He knows that when you are trying to shed truth to power you will become a target. Is anybody actually surprised that Premier Ford has done this? Isn’t this right out of the abuse of power playbook?"

Ford 'committed to police who are yes men'

Taverner, 72, did not meet the requirements of the original posting for a new OPP commissioner.

A Dec. 14 letter included in the court filings shows a communication between the premier and the integrity commissioner, where Ford said the rank requirements were removed after discussions between a recruitment firm Ford's office had retained, the secretary of cabinet, and Di Tommaso. Ford wrote that he was not aware of any consultation with his office on the posting, but that his office was part of the initial recruitment planning process:

"I reject any assertion that this change was made to specifically permit Mr. Taverner's application for the position...I would agree that some of the allegations that have arisen could have been avoided had the ranking requirements been removed from the job ad before its original posting."

"I believe this fact alone refutes any allegation that there was an orchestrated plan to appoint Mr. Taverner."

Ford has previously described the job of OPP commissioner as a "political appointment."

Taverner's appointment was on hold pending the completion of an investigation by the integrity commissioner.

Editor's note: This article was updated at 6:51 p.m. ET with new information about Ron Taverner's withdrawal from consideration for the OPP commissioner's job as well as additional reaction from Premier Doug Ford.

This is a red letter example

This is a red letter example of the abuse of power, and the myth of merit when it comes to humans making judgements in issues they perceive as affecting their own survival/comfort.

Mr. Blair and especially Mr. Taverner illustrate the fates of people unfortunate enough to cross the paths of people like the Premier, who value their own lives, desires and comforts above any possible argument of the "public good" or rule of law.

We are living in an era of embattled and petulant, entitled men with the means to buy their way into positions of power. They use a variety of methods to accomplish this, mainly based on economic advantage but also freely employing mind boggling lies, unindicted criminal behaviours and various forms of "blackmail", corruption and bribery. The excesses of this current era, have of, course been committed endlessly throughout human history.

The world seems to be divided into predatory raptors and their prey. No system of religion, philosophy, or morals has ever withstood this genetically embedded evolutionary drive. Fortunately predators are vastly outnumberd by their prey and perhaps evolution is slowly tipping in favour of the prey?

I am relieved the Taverner

I am relieved the Taverner has finally stepped away from this job. I think a more honourable person would have walked away quite a while ago or not accepted it in the first place. There are several unanswered questions about Tavener's history with the Ford family given their documented shady behaviour over the years. How many times did Taverner's men not charge the late Rob Ford with impaired driving? When Rob boasted to the underworld that he shouldn't be messed with because he "knew crooked cops" who exactly was he referring to?