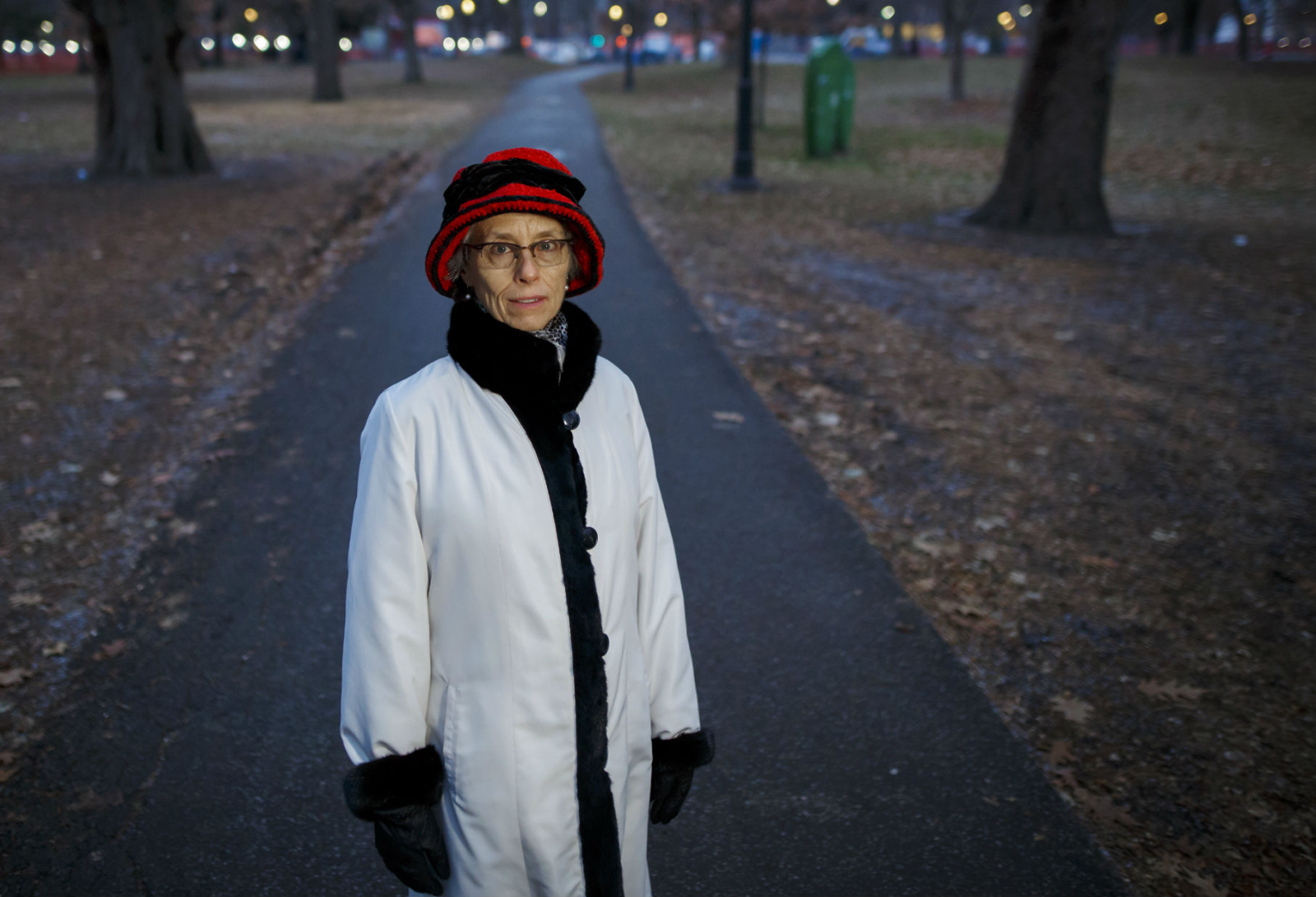 I’ve got the Environmental Commissioner of Ontario (ECO), Dianne Saxe on the phone. It’s late afternoon, in the dead of winter, and she’s on backcountry roads, heading north for a rare weekend off. “I might cut out,” she warns me.

Dianne’s office reports on compliance with the Environmental Bill of Rights, as well as Ontario’s progress on climate change, energy conservation, and other environmental issues. As a staffer at Faith & the Common Good, a national, interfaith charity with the goal of championing environmental and creation care throughout our network of diverse faith & spiritual communities, I am eager to hear directly from the mouth of the commissioner herself how faith groups measure up on the climate action front. And I'm not talking only about energy efficient light bulbs and recycling — I mean broad, transformative change. Critical action is needed immediately because climate change is happening now and, as Dianne warns in her climate report, much worse is ahead.

So, what, according to Dianne, are religious leaders contributing to the public discourse on climate?

“Not much,” is the disappointing response.

For instance, as part of the ECO’s mandate to support the public use of the Environmental Bill of Rights, Dianne’s office has carefully reviewed the thousands of comments that were submitted on the proposed Cap and Trade Cancellation Act, 2018.

“I had my staff review most of the 11,000 comments and saw no evidence of leadership from the faith communities,” she reports. “What are the Ontario bishops and faith leaders doing?”

“Faith leaders have been completely invisible, as far as I can tell, in the public debate in Ontario about how to fight climate change in general, and about carbon pricing in particular,” Dianne says. “I did not see a single faith leader speak up during the election or appear before the select committee to oppose the cancellation of cap and trade, and the great programs it was paying for. I have not seen any major faith group leading public education in their community about why Ontario must take urgent action now to reduce fossil fuel use and build renewable energy. Nor have I seen any faith leaders opposing the weakening of Ontario’s Growth Plan (for sustainable land use development and to avoid expensive sprawl) or speaking up about the elimination of my office.”

“And yet, environmental destruction is the key moral issue of the day,” she says through the phone, missing her turn and now having to backtrack.

The way Dianne puts it, “climate change and biodiversity loss are destroying the natural systems on which our lives depend, threatening our survival. I don’t know what is more important. And time is running out.”

And that’s where faith comes in. Dianne believes religious communities have the potential to be tremendously influential.

“Faith leaders are in an ideal position to take action because they explicitly occupy a moral and spiritual ground, which the members of their community tend to share with them,” she says.

“The climate crisis presents an opportunity for the world’s trusted faith leaders to not just avoid catastrophe, but also to create a better world. It’s not just a moral obligation. It’s a moral opportunity.”

Dianne herself is an active member of her synagogue. "I prize the explicit, shared expectation that we are there each week to challenge and support each other to do the right thing," she says.

For Dianne, one of the reasons faith leaders are so important to the debate is that as some of the most trusted voices, their words would have significant weight, especially with the more conservative faith communities in the province. She has little patience with niceties. She’s blunt when she asks, “If religious communities won’t stand up to help steer the moral discourse on climate and human survival, what are they for?”

I ask Dianne why she thinks Ontario faith leaders, for the most part, have chosen silence.

She tells me that she cannot speak for others about their motivation, rather she focuses on stating facts.

I asked this same question to Faith & the Common Good's Executive Director Lucy Cummings. Lucy offered some perspectives on the inaction.

“While faith communities have strong track records on social justice issues (like poverty alleviation, homelessness, welcoming newcomers), they have less experience in advocating around climate justice issues. Especially at the provincial level," she says.


Lucy suggests another reason for the hush: our divisions on how to respond to the climate crisis are reflected in our congregations. "I have heard from many clergy that they struggle with finding a way to prioritize climate justice without being partisan or divisive,” she says.

Despite these challenges, Lucy remains hopeful. “The demand for faith-based climate action is growing. Political leaders, like Vancouver City Councilor Christine Boyle and federal environment minister Catherine McKenna, are sounding the call for people of faith and conscience to step up.”

Moreover, an increasing number of “people in the pews” regardless of theological backgrounds, are asking their leadership to share a clear, compelling moral vision on climate action that not only reflects their shared values but is commensurate with the size of the challenge. “I believe people are hungry for the hope and fulfillment that comes from working together to reconnect with Creation and walk more gently on the planet,” Lucy adds.

As for Commissioner Saxe, she does not shy away from the fierce urgency of this crisis. “If you lack knowledge, get it,” she concludes our chat, having reached her destination. “If you have the knowledge and are doing nothing...then you’re ignoring your moral duty.”

Editor's Note: Saxe's office was axed by the Ford government in late 2018. On May 1, the office of the Environmental Commissioner of Ontario will no longer exist. Until then, her office continues to serve the people of Ontario.

Author Beatrice Ekoko works with the interfaith organization Faith & the Common Good offering projects, guides and resources to inspire faith communities in greening, sustainability and climate justice. This article is the first in a new series: Protecting a Life-Supporting Climate: A Call to Faith Leaders

In almost all religions and faith philosophies, the stewardship of creation is a major directive. Taking care of the vulnerable is implied. Climate change is destroying the sacred creation and harming the most vulnerable among us--the ones least responsible for this climate breakdown. That’s why religious leaders have a critical role to play in advancing climate protection action: they are in the position to give the climate change debate a moral tone, and bring to the fore, true principles.

While famous faith leaders such as Pope Francis, the bishops of the Church of England and the Dalai Lama are speaking up for climate and ecojustice, we need the voices of the imams, rabbis, bishops and priests, monks in our communities to communicate to their congregations the urgent need to act on behalf of our climate.

The future of climate needs the weight and influence of their voices because if our local faith leaders are not treating climate change like the emergency it is, how can we expect the people they lead to be concerned?

Having seen the work done by

Having seen the work done by Dianne Saxe, I find it impossible to argue with her research on this matter and her conclusions.
However powerful, faith groups alone cannot turn the tide against Global Warming. Industry (or corporations) also have a major role to play - not just the polluters, but also those who will be drastically effected by the impacts of Global Warming. Front and centre in that group are insurance companies.
As weather catastrophes (like floods, tornadoes, ice storms, etc.) increase in intensity or power (because of Global Warming) so will the costs of repairing or even coping with the damage. Yet the insurance companies have remained silent on the causes and seek only to raise premiums in order to cope with the ever increasing insurance costs. This lack of concern and initiative, shown by the Insurance industry, is unconscionable and inexcusable. In the end we will all be paying much more to cope with Global Warming, rather than spending now to mitigate the long term effects.
(It should be noted that Global Warming does not necessarily increase the occurrences of weather events, but it does increase the intensity of the events, simply because Global Warming increases the energy in the atmosphere.)