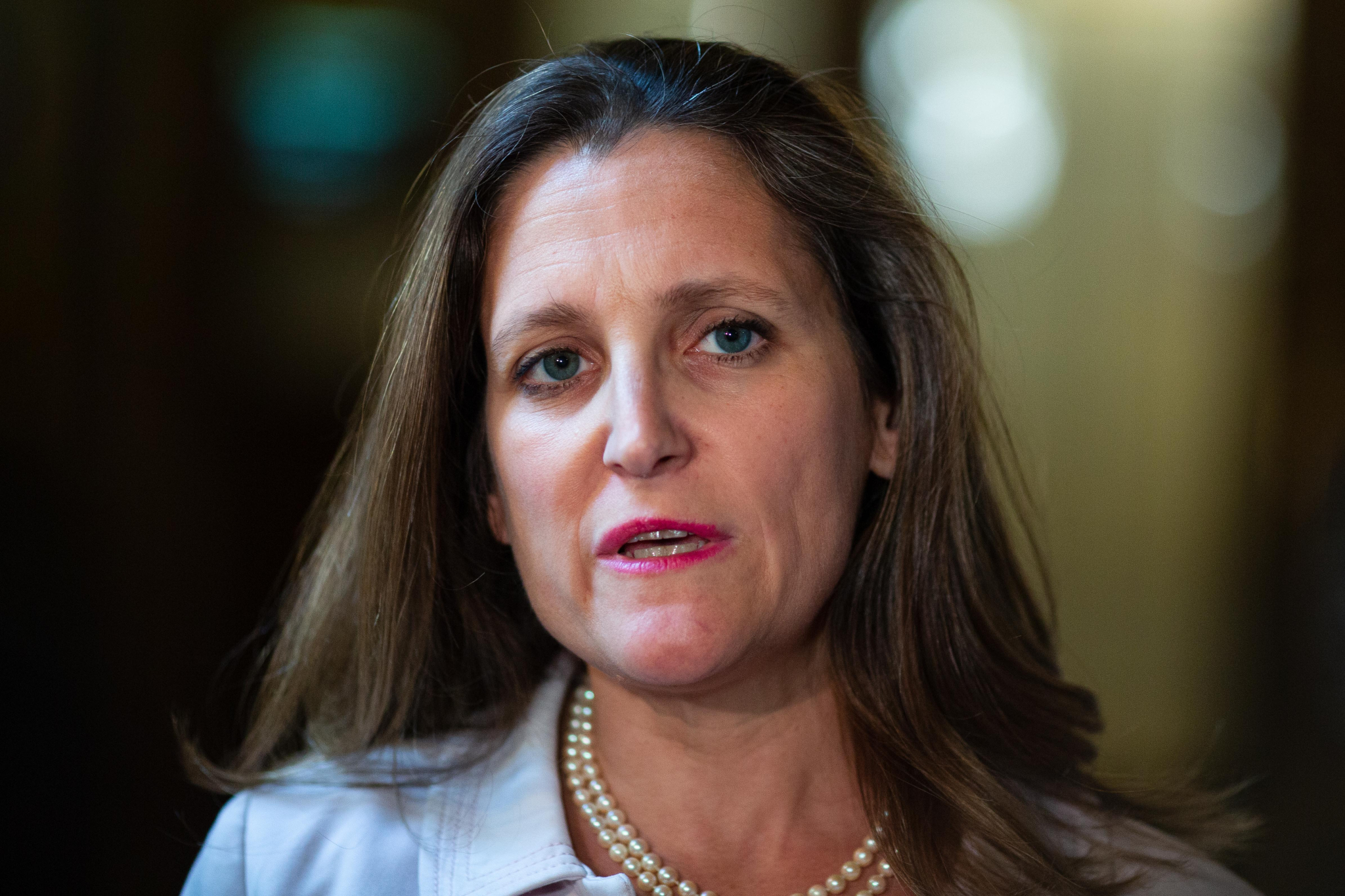 Canada’s foreign affairs minister says violent white supremacists and other far-right groups threaten the country's stability and should be the primary focus of the international community’s counter-terrorism efforts, including by stopping the spread of hate online.

Chrystia Freeland told the United Nations Security Council on March 28 that she felt a "personal responsibility" to denounce white supremacist attacks "as the foreign minister of a majority white and majority Christian country."

The minister referred to the attacks in Christchurch, New Zealand, where a white supremacist gunned down 50 Muslims at two mosques who were gathered for Friday prayers. “As a Canadian, this attack was all too familiar," she said. "Two years ago, a terrorist killed six people in a Quebec City mosque.”

She said “neo-Nazis, white supremacists, incels, nativists, and radical anti-globalists who resort to violent acts are a threat to the stability of my country and countries around the world.” Freeland added that those attacks "need to be at the top of our agenda when we talk about confronting terrorism.”

She called white supremacism “one of the most serious terrorist threats of the current age” and said the online spread of hate was “an international problem, and we need to act collectively to address it.”

Her remarks come one day after Facebook announced it would ban support for white nationalism and white separatism from its social media platforms. Also on Thursday, Facebook Canada’s head of public policy Kevin Chan described that policy in more detail, in remarks he gave in Ottawa.

Last week, a far-right protest was organized in Toronto by Patriots of Canada Against the Islamization of The West (Pegida Canada), a local chapter of a larger movement that has been fostering hatred towards Muslims. That demonstration, involving about two dozen people, was largely contained by a counter-protest of hundreds of people who stopped the anti-Muslim group from spreading their message on the streets of downtown.

Freeland also said hatred is “increasingly spread through the internet," in online forums and on social media. “We must be aware of this, and work to stop it," she said. "Our work cannot be undertaken in isolation. Each of our countries will of course address this issue in different ways, but we need to recognise that this is ultimately an international problem, and we need to act collectively to address it."

She said she felt an obligation to speak out following the Christchurch attack.

“In the wake of acts of terrorism carried out by Muslim extremists, Western countries often call upon Muslim countries and Muslim leaders to condemn those attacks in the name of their people and their faith," she said.

"It should follow that, as the foreign minister of a majority white and majority Christian country, I feel a specific and personal responsibility to denounce white supremacist attacks in the same way.”

The Christchurch suspect shared a live video of the attack on Facebook as it was carried out, gaining "about 4,000" views before Facebook pulled it down. But the content was copied and posted elsewhere online, and Facebook was then forced to remove over a million versions of it over the next 24 hours, as users re-uploaded it with variations to avoid detection systems.

YouTube also struggled to take down tens of thousands of versions on its platform. Both companies engaged in a tug of war with users over the banned video content. Both are now being sued by the French Council of the Muslim Faith for allowing the footage on their platforms.

On Wednesday, Facebook said it had consulted with members of civil society, academics and other experts, as well as conducted its own review of hate-based organizations — and had concluded that praising, supporting or representing white nationalism was inseparable from supporting hate groups.

Speaking at the Broadbent Progress Summit in Ottawa Thursday, Facebook Canada’s Chan said Facebook will be adding white nationalism and white separatism to its blacklist of people and organizations that it believes to be on a violent mission.

That means that the policy, expected to be enforced starting next week, will ban white nationalist groups and individuals from even “having a presence on Facebook,” which means they would be banned from having an account, a page or a group.

The blacklist, which is called “Dangerous Individuals and Organizations,” already includes groups involved in organized hate, as well as terrorist activity, mass or serial murder, human trafficking, and organized violence or criminal activity. Content that supports or praises groups or leaders in those categories is also taken down.

Chan compared the policy change to Facebook’s prior move to ban known terrorist groups like al Qaeda so they couldn’t recruit or radicalize people on the platform. Those groups became part of the “Dangerous Individuals and Organizations” list and were banned — irrespective of their content.

“So if it’s reported to us, we’ll take that down, and increasingly we have automated systems to get at terrorist content as well,” he said.

“And what we will want to do, moving forward — and enforcement will begin next week — with respect to white nationalism and white separatism, we’re basically adding these to our list of ‘Dangerous individuals and organizations’ and we will apply the same kind of playbook to this kind of challenge.”

Facebook says it will ban white supremacy on its platform

The illusion of stability has been maintained by violent white supremacists.

Canada is just another of the covert racist states in the world but with the added attraction of sniffy sanctimony to make the whole thing more detestable.

Of far more danger to Canada

Of far more danger to Canada is our Global Affairs Minister running around spreading fear when she should be dealing with trade problems with China that prevent western farmers from selling their canola crops. And also making sure the Canadians being held by China are released. The diplomat who was an ambassador gave her step by step instruction on how to deal with China but as usual she didn't listen. She is always off somewhere being important while serious issues are not taken care of in her own country. Remember her impulsive action regarding Venezuela that didn't work because it was the wrong thing to do.

So if she's this upset about

So if she's this upset about white nationalism, racism and neo-Nazis can we expect her to become critical of the Ukrainian government with its strong ties to paramilitary racist, often neo-Nazi groups?

I think there are a lot of

I think there are a lot of really good decent people in Canada and in New Zealand too. Think how the good guys scared off the bad guys in Toronto. Think about the medics heading to Mozambique to help. Every time you feel fear in your heart think about how often people get together to support those in trouble. Why doesn't she work at getting those poor guys out of China.

I guess I’m the odd one out

I guess I’m the odd one out here, because I think it was important for her to do this. Western countries and citizens have called on individual Muslims to assume a personal share of responsibility for every violent jihadist attack. Meanwhile violent white supremacists have been dismissed over and over as lone wolves that have nothing to do with the rest of us. The narrative needed changing hard, because it’s actually fuelling extremism — both kinds. So, whatever else she is or isn’t doing, I like this.

Re canola, we’re vulnerable to the kind of pressure China is exerting precisely because, over and over, we put all our eggs in one basket. The point of diversifying your market is to reduce your dependence on, and ability to be manipulated by, any one trading partner. We're like some demented Easter bunny.

How ironic that Freeland, who

How ironic that Freeland, who aggressively promotes the right-wing Lima Group in aiding and abetting Washington's white supremacists in their ongoing "all-options-are- on-the-table" efforts to overthrow the Maduro regime in Venezuela, now feels a "personal responsibility" to denounce white supremacist attacks "as the foreign minister of a majority white and majority Christian country."

Yes! We’re ragingly inconsistent, but there’s something depressingly consistent about how we go about it: High-minded statements publicly, then return to business as usual, carrying water for Washington, Bay Street and white colonialism. The contrast between Ukraine and Venezuela couldn’t be starker.