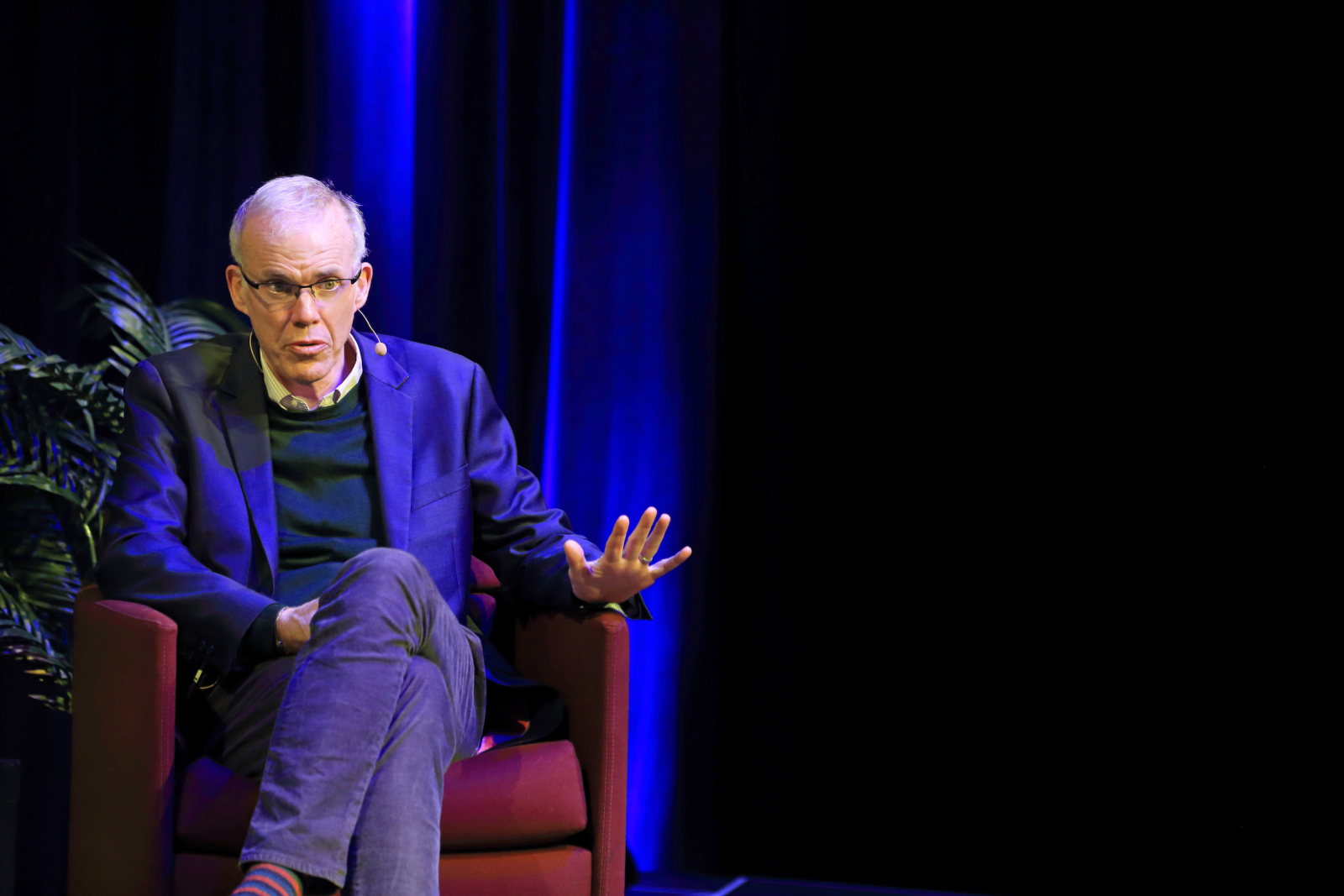 Environmentalist Bill McKibben encourages a Vancouver audience to get involved in the climate fight on Apr. 2, 2019. Photo by Tiffany Brown Cooper
Previous story

Environmentalist and author Bill McKibben calls climate change the most important issue facing the world today and likens the struggle against it to the Second World War.

McKibben told a packed house at the University of British Columbia’s Chan Centre for the Performing Arts that they should consider it an honour and a privilege to be part of the battle.

“Not very many people in any given moment of history get to say they are doing the most important thing they could be doing right now in the world,” said McKibben, who is the author of 12 books including 1989’s The End of Nature. He’s also the founder of 350.org, an organization that campaigns against new coal, oil and gas projects and supports building 100 per cent clean energy solutions. His newest book, Falter, will be released on April 16.

McKibben appeared with Canadian Green Party Leader Elizabeth May, who is also Member of Parliament for Saanich-Gulf-Islands.

May said if people get depressed about climate change, they should “shake it off and keep working.”

“If the people who understand the problem start to despair, it’s just as bad as apathy,” May said.

McKibben encouraged everyone in the audience to get involved, specifically mentioning protests against the Trans Mountain pipeline as one way to change the world by keeping millions of barrels of oil in the ground.

“It has been so powerful and beautiful to watch people fight against the Trans Mountain pipeline coming across British Columbia,” McKibben said. “That pipeline, like everything else coming out of the tar sands is a global warming machine.”

He encouraged everyone to do what they can to fight climate change.

May urged everyone to act.

“There is no time left for procrastination," May said as she turned her comments towards Ottawa. "Justin Trudeau, you can’t buy a pipeline and pretend to be a climate leader.”

McKibben recognized that Vancouver is home to several prominent environmental leaders, including May, David Suzuki and Tzeporah Berman.

McKibben says an adult version of school strikes is coming

Both McKibben and May gave shout outs to Greta Thunberg, whose Twitter handle describes herself as a 16-year-old climate activist with Asperger’s. Thunberg started a movement of school strikes against climate change in Sweden, that have inspired other young people around the world.

“It’s great fun to watch her speak plain truth to power,” McKibben said. He hinted at similar action to come from adults in the business world this fall.

The event took place just one day after the release of a scientific report that warned Canada is warming twice as fast as the rest of the planet, something McKibben said is because of melting Arctic ice.

“Climate change has hit much harder and much faster than we thought 30 years ago,” McKibben said. “The world is changing with ferocious, ferocious speed.”

Drastic climate events are happening every day, all over the world, he said, mentioning the wildfires in California last year, when the town of Paradise, California, “turned to hell,” when it burned.

“It’s as if Mother Nature is just trying everything she can think of, including irony, to get our attention,” he said.

If we want to solve this problem, we are capable, McKibben says

“The cheapest way to produce energy around the world is to do it renewable,” he said. “If we wanted to solve the biggest problem that humans have faced, we are capable of doing it. It would not be simple and it would not be free … But it is well within the realm of the possible.”

May said the Intergovernmental Panel on Climate Change in their report also gave reason for hope.

“They said it’s not too late. ...They said we have time to save ourselves,” she said. The only thing we're lacking is political will, May said. Although she prefers to call it "political courage."

But McKibben said the other thing that’s lacking is time. He said the next election cycles, both in the U.S. and Canada are critical.

“I cannot guarantee that we’re going to win this fight,” McKibben said. “If we don’t win it soon, we’re not going to win it at all.”

McKibben said although we’re not engaged in a literal war between countries, there are many parallels.

“We’re losing territory every day. Nobody is fire-bombing us, but we have huge forest fires. They're not some enemy actively destroying our crops, but we have droughts,” McKibben said. “We’re in some very real sense, at war, and we need to rise to that occasion. We don’t need to do it in a violent way, just the opposite.”

Humanity’s job is to figure out how to save the planet, he said.

“We’re small, but we’re the many and if we do what we need to do then we can stand up to the big and the few and if we do, then we’ve got a fighting chance,” McKibben said.

The event was part of the Phil Lind Initiative, an annual dialogue series and course, at the University of British Columbia. The 2019 series America and the Climate Crisis included speakers who also guest teach one session of a graduate seminar.

McKibben has won several prizes, including the Right Livelihood Prize, which is sometimes called the “alternative Nobel.” He holds honorary degrees from 18 colleges and universities and Foreign Policy named him to their list of the world’s 100 most important global thinkers.

May is the author of eight books and a lawyer. In 2011, she was the first Green Party candidate ever elected to the Canadian House of Commons. She was re-elected in 2015.

Phil Lind graduated from UBC and has worked for Rogers Communications for 39 years, working closely with the company’s founder Ted Rogers.

Thing is, "You Can't Wage War

Thing is, "You Can't Wage War Without an Enemy," which just happens to be the title of this Climate Action Performance Poem -- https://www.youtube.com/watch?v=FtxlmXwaL5o

But of course there's an

But of course there's an enemy. We're just afraid to name them, careful to look away when government is handing them our tax dollars in the form of subsidies. May is right you know....its not 'political will' that's lacking, its 'political courage'.

As Utah Philips said years ago: "The planet isn't dying; she's being murdered. And the people who are murdering her have names and adresses".

We all need to stop pretending everyone thinks 'we're all in this together', and acknowledge that a large part of our apathy in the face of horrific climate news, is FEAR.

I was with you right up to your last sentence, but from there I beg to differ. There are those of us that are scared as hell, but most are not scared enough - they feel, come what may, that things will still be 'ok' in the first world, or they think that even if it starts to get really, really bad, that this will surely all still be reversible, even fixable, and they may even think that this is God's will and that somehow God will provide. You and I both know that none of any of that is true.

We're collectively driving the earth over a cliff, and collectively, we can solve it. Our home is on fire, it's time to stop looking at each other and do something.

Canada is warming twice as

Canada is warming twice as fast as the rest of the world, because of Arctic Ice....that in itself is ironic, since I remember an Alberta government report of a few years ago that mentioned climate change only once or twice, but assured us 'the good news is that Alberta will still be able to produce agricultural crops that the rest of the world will need'.
Sounds like that might have been a case of conservative optimism......but even then, those of us who understood the science should have been more appalled....and worked harder to help our fellow citizens accept reality.

There is an alternative future possible; and it could be prosperous for all of us. But no one can be a billionaire, the end of nature is not a 'business opportunity', and sea level rise isn't going to create real estate bubbles on high ground......

There will be no winners if the majority are losers. We should have figured that out decades ago....but there's still time to ditch Mammon, and embrace our common humanity. Cooperation works in nature; we should try it too.