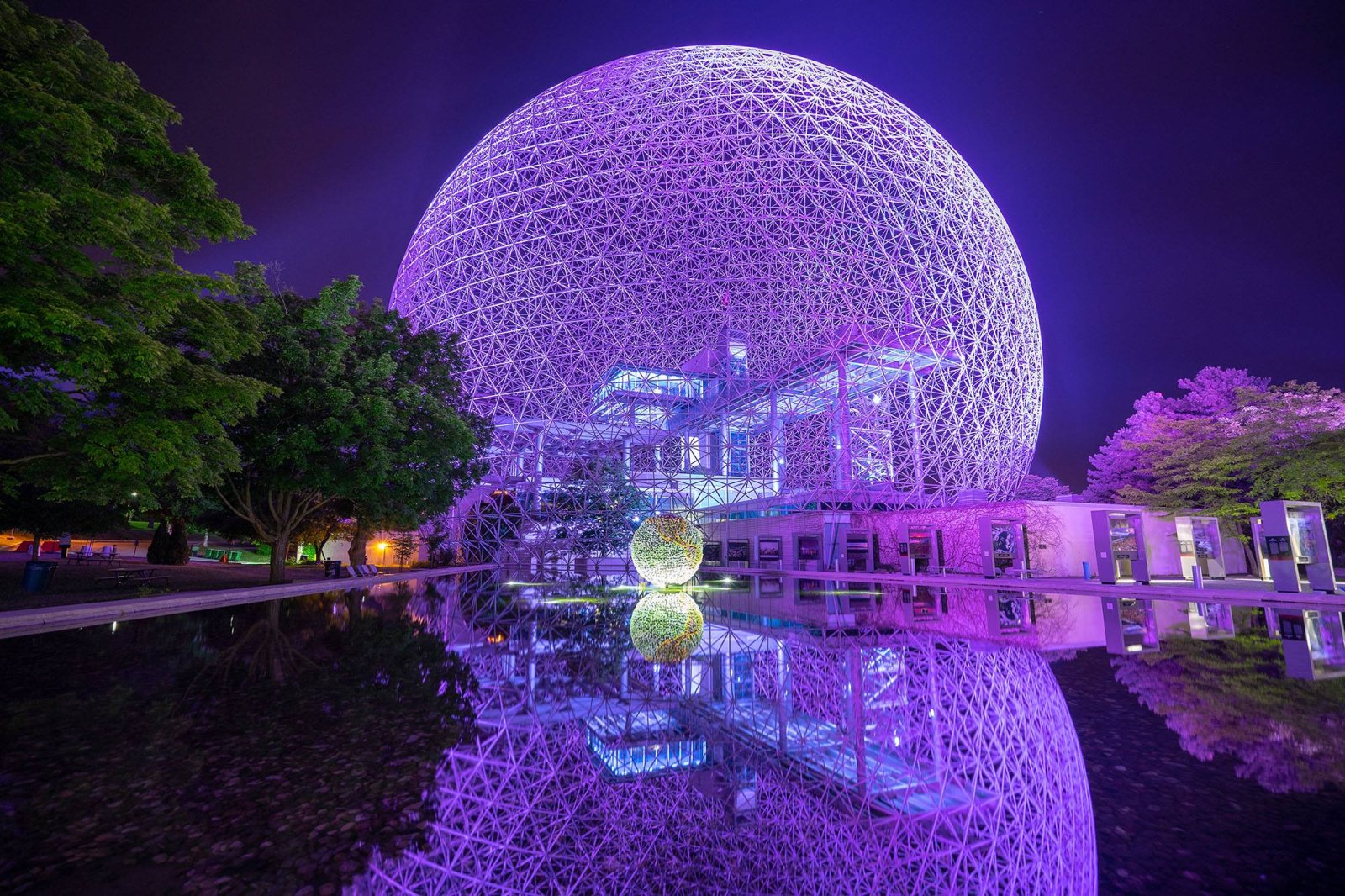 At this museum, you can visit an exhibit showing what will happen when the Earth’s temperature rises by one degree Celsius.

You can also learn how scientists predict future temperatures, why global warming doesn’t make the planet warm everywhere all at once, and how climate change hurts human health.

The exhibit, called Plus one degree Celsius is at the Montreal Biosphere, a geodesic dome in Parc Jean-Drapeau on Île Sainte-Hélène.

The Biosphere has housed an environment museum run by the federal Environment Department since the 1990s. It bills itself as "the only environment museum in North America," exclusively dedicated to exploring things like "meteorology, climate, and water and air quality."

But the government's lease is set to expire on Dec. 31, 2019 and its future is uncertain. There are competing visions over the area’s future, and maintaining the site as an environmental museum is only one option being considered.

Another idea is to turn the Biosphere area into a kind of spa, with a new recreation and health centre including yoga, outdoor baths, massage therapy and a terrace. Still another is to create a centre where art, science and technology tackle all sorts of ecological and social issues.

The iconic Biosphere has faced extinction before, both physically and politically, and has stood the test of time.

Originally built to house the United States pavilion for Expo 67, it was the site of a devastating fire in 1976 that saw it shuttered for years. After reopening in 1995 it was further assaulted during the 1997 ice storm.

Then in 2012, the government of former prime minister Stephen Harper announced its closure as part of departmental funding cuts. It survived following a public outcry, but suffered budget and staff reductions and the loss of national museum status.

Those cuts hurt its ability to promote environmental and climate change matters to students, which it had been doing through things like school group visits.

Now, Environment and Climate Change Minister Catherine McKenna says the Biosphere plays an “important role” and that its future is a “priority.”

Yet any support from the federal government will have to work with a new master plan the City of Montreal is developing for Parc Jean-Drapeau.

McKenna told National Observer she has held discussions with Montreal Mayor Valérie Plante and Quebec Environment Minister Benoit Charrette “to talk about how we might partner going forward, to keep the Biosphere.”

“There’s been no decision yet,” she added. “It’s the only climate museum in North America, which I think is very interesting. But it requires figuring out what the vision will be. I think I can say, from a positive perspective, that there was a positive response from both Montreal and the government of Quebec.”

Meanwhile, Ensemble Montréal has asked the Trudeau government to reinvest in the Biosphere. Councilor Chantal Rossi said "we must save the Biosphere and its status” as a heritage building and a legacy of Expo 67, Métro reported.

The Office de consultation publique de Montréal (OCPM), the commission on the future of the property, heard from 7,125 participants and issued a report dated March 27, 2019. It said it “supports the demands of those pressing the government of Canada to quickly announce its future intentions."

Ottawa should confer a status on the Biosphere "that will allow it to be in sync with current environmental concerns," it added. Otherwise, "the commission considers it essential that this highly symbolic place finds a public purpose quickly."

Plante’s press secretary Geneviève Jutras said the mayor and the minister have talked about the Biosphere “a few times over the past several months.” She said the issue was last raised during a bilateral meeting on March 14, and “since then the talks are ongoing at the administrative level” and between members of the cabinet.

"Let’s keep in mind that the project will have to blend in with the vision that will be developed through the new master plan, which will be developed following the report of the public consultations that was released just last week."

Designed by R. Buckminster Fuller, the geodesic dome was donated to the City of Montreal by the U.S. government after the 1967 World’s Fair, called Expo 67, and used for public attractions.

It was originally covered in an acrylic membrane that was destroyed in 1976 by fire. The city shuttered access to the site after that, but in 1990 the federal Environment Department participated in a management plan for Parc Jean-Drapeau.

The department then signed a $17.5 million, 25-year deal to convert the site into an “eco-action” showcase for the Great Lakes—St. Lawrence River ecosystem, and assumed building operations.

The new museum opened in 1995 under the Liberal government of former prime minister Jean Chretien. In 2007, the Biosphere became the Environment Museum, a space dedicated to environment and climate change.

OCPM's recent report showed the architectural firm Lupien + Matteau has put forward a plan to strengthen the museum as a meteorological and climatic hub, complete with a new research centre and rebranded as a national museum in line with others like the Canadian Museum of Immigration in Halifax.

Only that immigration museum and the Canadian Museum for Human Rights in Winnipeg are outside the capital region of Ottawa-Gatineau, which is home to national museums for agriculture, history, war, nature, science and technology, aviation and space, and the national gallery.

Culture Montréal told the commission that the federal government must give the museum the status and means to address climate change, while Tourisme Montréal said "the essential awareness of climate change” should remain part of the museum’s character.

A second proposal, the Geoscope project, would combine art, science and technology. This idea, by Les Interstices in partnership with Société des arts technologiques would fulfill the “original vision imagined for Expo 67 which has never been realized,” they argued to the commission.

The third proposal, to add a recreation and health centre with yoga and other amenities, would be a “heritage site combining nature, health and business," said purveyor Ikonik Inc.

“heritage site combining nature, health and business," Franchement! Anyone who attended the Opening Day of Expo 67 (we did it with our 4 children aged 5 to 10) can attest to the fact that Expo 67 did not only reach but surpassed its "imagined original vision". It was truly a spiritual experience to be literally physically moved by a massive gathering of peoples of all creeds, colours, languages etc. joined to celebrate our unity and connectivity as humans. The elation was reflected in the expressions of all attendees. It was truly exhilarating and unique for this now 82-year-old. So, please, Montreal/Quebec/Ottawa, do the right thing and preserve the climate change Museum for the benefit of all peoples of the world and pursue the Expo 67 vision.