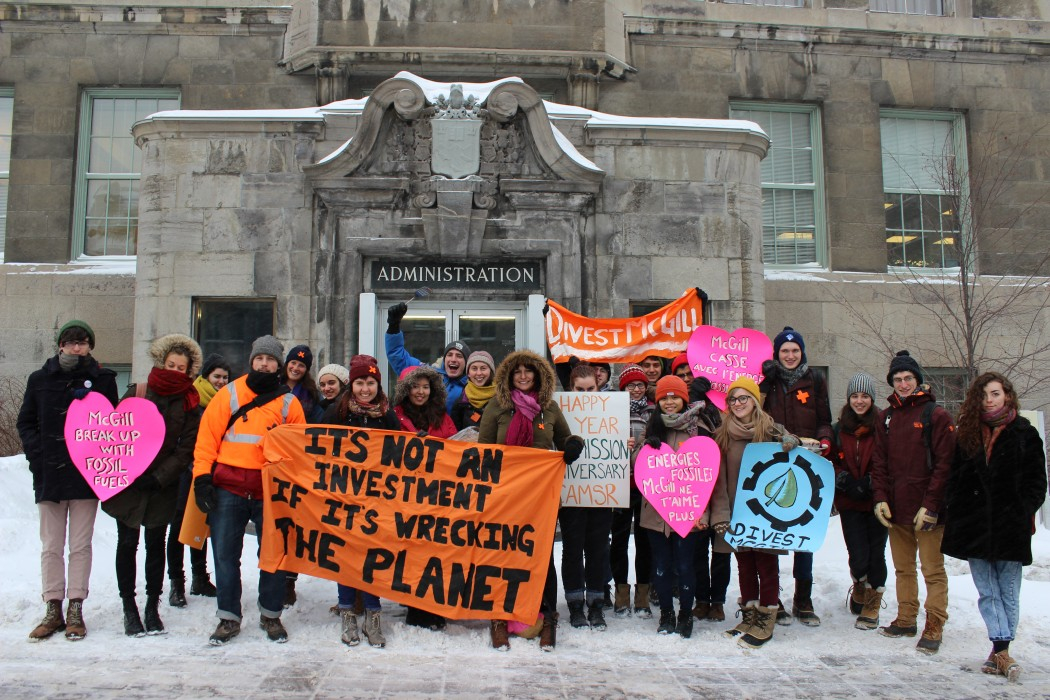 Last week, we submitted our resignations as elected faculty representatives to the Board of Governors of McGill University. We believe the board is about to make a decision to which we cannot be party in good conscience, and we have exhausted the means at our disposal to influence this decision.

Our years of experience on the board suggest to us that it will most likely reject a recent resolution by the McGill Senate in support of divestment of the university’s endowment fund from fossil fuel companies. Such a decision would be unconscionable for two reasons: it would violate McGill’s policy on socially responsible investment, and it would violate the principles of collegial governance upon which the university is founded.

Let us take these violations in turn. First: the university’s investment guidelines commit McGill to socially responsible investing, under the advice of the Board’s Committee to Advise on Matters of Social Responsibility (CAMSR). CAMSR’s terms of reference direct it to consider whether the activities of companies in which the university invests result in social injury, including “grave injurious impact…on the natural environment.”

In 2015, a student–led group submitted to CAMSR an expression of concern calling for phased divestment of McGill’s holdings in the top 200 global fossil-fuel companies (a previous petition was rejected in 2013). This request was supported by the undergraduate and graduate students’ societies, the Faculty of Arts, the Faculty of Law, the McGill School of Environment, the Department of Integrated Studies in Education and hundreds of faculty members. Yet, in 2016, CAMSR again recommended against divestment stating that the committee was “unconvinced that grave injurious impact resulting from the activities of the top 200 fossil fuel companies or a particular fossil fuel company has occurred at this time.”

The Board accepted this recommendation, with the result that McGill currently maintains significant investments in the global fossil-fuel industry. This despite the fact that decades of environmental science, up to and including the 2018 Intergovernmental Panel on Climate Change Special Report on Global Warming, make it clear that continued extraction and burning of fossil fuels is incompatible with the imperative to reach international warming targets, and results in grave injurious impact on the natural environment.

Responding to this impasse, in fall 2018, the McGill Senate adopted a resolution stating that it “favors, in principle, a move to divest the endowment from all companies whose primary business is the extraction, distribution, and/or sale of fossil fuels; and from all mutual funds that invest in such companies.”

Rather than responding directly to this resolution, the Board has referred the matter back to CAMSR, the same committee that has twice rejected calls for divestment from fossil fuels, and which is currently chaired by a former executive in the petroleum industry. We believe that, in doing so, the Board is preparing once again to recommend against divestment.

This is the second reason for our resignation. Rejection of the Senate’s decision on this matter would constitute direct interference by the Board in the collegial governance of the university.

The Board has a fiduciary responsibility to manage the McGill’s finances prudently. But unlike a private corporation, where financial returns and growth take precedence, at McGill these priorities are limited by the university’s mission as a public institution devoted to teaching and research in the service of society. At a university, when financial considerations and service to society are in conflict, the latter prevails.

The matter of fossil fuel divestment raises the question of what service to society requires in this case, and who gets to decide.

Universities are distinct in that their most important decisions, including about the meaning and demands of their mission, rest with the collegium -- the gathering of students, faculty, staff and administrators that constitutes the university. At McGill, the collegium is represented by Senate, the most representative and accountable body at the university. And, after lengthy and informed debate, the Senate voted overwhelmingly in favour of fossil fuel divestment.

At our orientation as Board members, we were told that the ethos of university boards is “noses in, fingers out”—scrutinize, but do not meddle. Should the Board decide to reject the Senate resolution favoring fossil fuel divestment, it will violate this principle, by obstructing the will of the collegium on a matter pertaining to the university’s mission. Only the collegium can decide whether the Board’s commitment to investment in fossil fuels contradicts the university’s commitment to serve society. And it has decided.

We cannot maintain solidarity with a Board that places the university in ethical jeopardy and undermines the integrity of collegial governance. As Governors, we requested the opportunity to meet with CAMSR to raise these concerns. Our request was denied and we were encouraged instead to communicate our views in writing. That is what we have done here.

Editor's Note: A version of this editorial was initially published in French in LaPresse+ on April 19, 2019

Good for them - Are there

Good for them - Are there more Board members of sound mind and moral integrity?

This also shows us that the

This also shows us that the laws governing corporations need to be changed so that profit does not trump all other concerns. Read “The Corporation” by Joel Bakan.