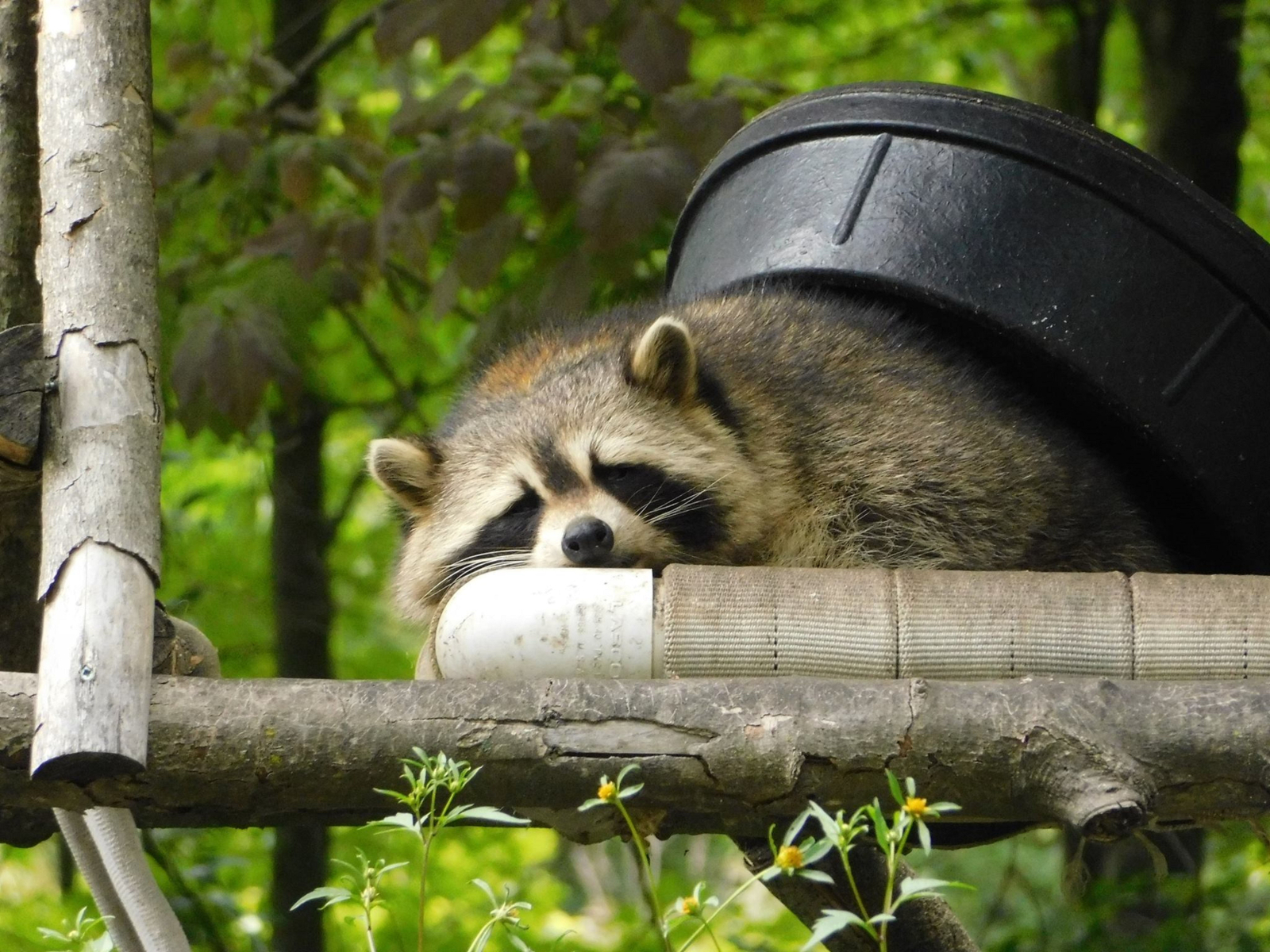 Raccoon with a lid on its back published Jan. 17, 2018. Photo by Successfully Canadian on Unsplash
Previous story
Next story

On the roof of my downtown Montreal greystone lives a family of raccoons. It’s at this time of year I start noticing them again. As the days become longer and warmer, their eyes, glowing in the low light of dusk, peek out over the edge, before they silently step down the fire escape to cautiously investigate who now shares their urban habitat (my yard), once again. But, halfway is as far as they ever come, as long we humans or our barky dogs are around. Come nightfall they will venture down to tear open a garbage bag or two, but by morning they have all but disappeared. That’s pretty standard Montreal raccoon M.O.

From what I hear though, Toronto raccoons are different. I hear they are not nearly as polite, much more brazen and bold, opening locked trash cans, entering homes, and generally acting like they run the place. Toronto's love-hate relationship with the “trash pandas” has been well documented. It’s all very cultural, it seems. And so, please excuse this outsider perspective, this defence of raccoons and important bit of information: if a raccoon is coming near you, not running away, this is not some unique rude behaviour exclusive to the GTA. It’s illness. And the correct course of action is not to attack (with a kitchen utensil), but to get the poor animal help.

According to Nathalie Karvonen, executive director of the Toronto Wildlife Centre, when a raccoon in Toronto is acting oddly, without any obvious sign of injury, and particularly if not backing off when approached, “it’s almost always distemper.” Distemper is a common, highly contagious and untreatable virus. It is not harmful to humans or vaccinated dogs, but can affect other wildlife such as skunks and mink. It causes great suffering in raccoons.

“If we get a call into our hotline about a raccoon not acting normally,” says Karvonen, “we will ask the person to approach and see what he does; you shouldn’t be able to get that close.” Being able to touch a raccoon (gently) with a broom stick, for example, means something is wrong. “He’s dying,” she says. “Illness is killing the poor thing.”

In such a situation, Karvonen says the best thing to do is try to contain the animal. “Place an old recycling bin with something heavy on top, so they won’t wander into traffic, and call Toronto Animal Services.” Humane euthanasia will end any further suffering, such as starvation, falling from a tree, or being hit by a car.

(For anyone fearing rabid raccoons, Karvonen points out: “Rabies is more common in cows than raccoons, in Ontario.”)

Let us not forget that our urban spaces, whether in Montreal, Toronto, or any other Canadian city, are not only ours but are also home to a wide variety of wildlife which have every right to be there. Most were there first. And as they adapt to our encroaching presence, so too must we adapt to theirs. That includes being kind, even when they seem to get in our way, and especially when they are sick.

Let us also not forget: attacking wildlife in Canada, is illegal.

Jessica Scott-Reid is a Canadian writer and animal advocate

I recently lived in Vancouver

I recently lived in Vancouver and frequently heard first hand from people who had fought off aggressive raccoons. The raccoons were not ill. The mothers in particular, are extremely aggressive, especially with dogs and people walking dogs. I saw on local tv several cases where people were chased and attacked (legs badly scratched) by a raccoon. In my neighbourhood (Granville Island area) you kept a vigilant eye for raccoons when walking at night through gardens or enclosed area. I was told stories from at least two people about being cornered by an aggressive raccoon. One neighbour fought it off with a heavy flashlight as it kept charging him. A woman recounted how terrified she was as the raccoon was between her and the exit from the garden and her and her dog, but the raccoon was charging her, not the dog.
So maybe some raccoons are ill in Toronto but such a generalization that if a raccoon is not running away from you, it's ill, is frankly wrong.

Hmm, I wonder if Raccoons are

Hmm, I wonder if Raccoons are smart enough to modify their behaviour to suit the temper of the human environment in which they live? Raises interesting questions about the humans living in these diverse cities...?