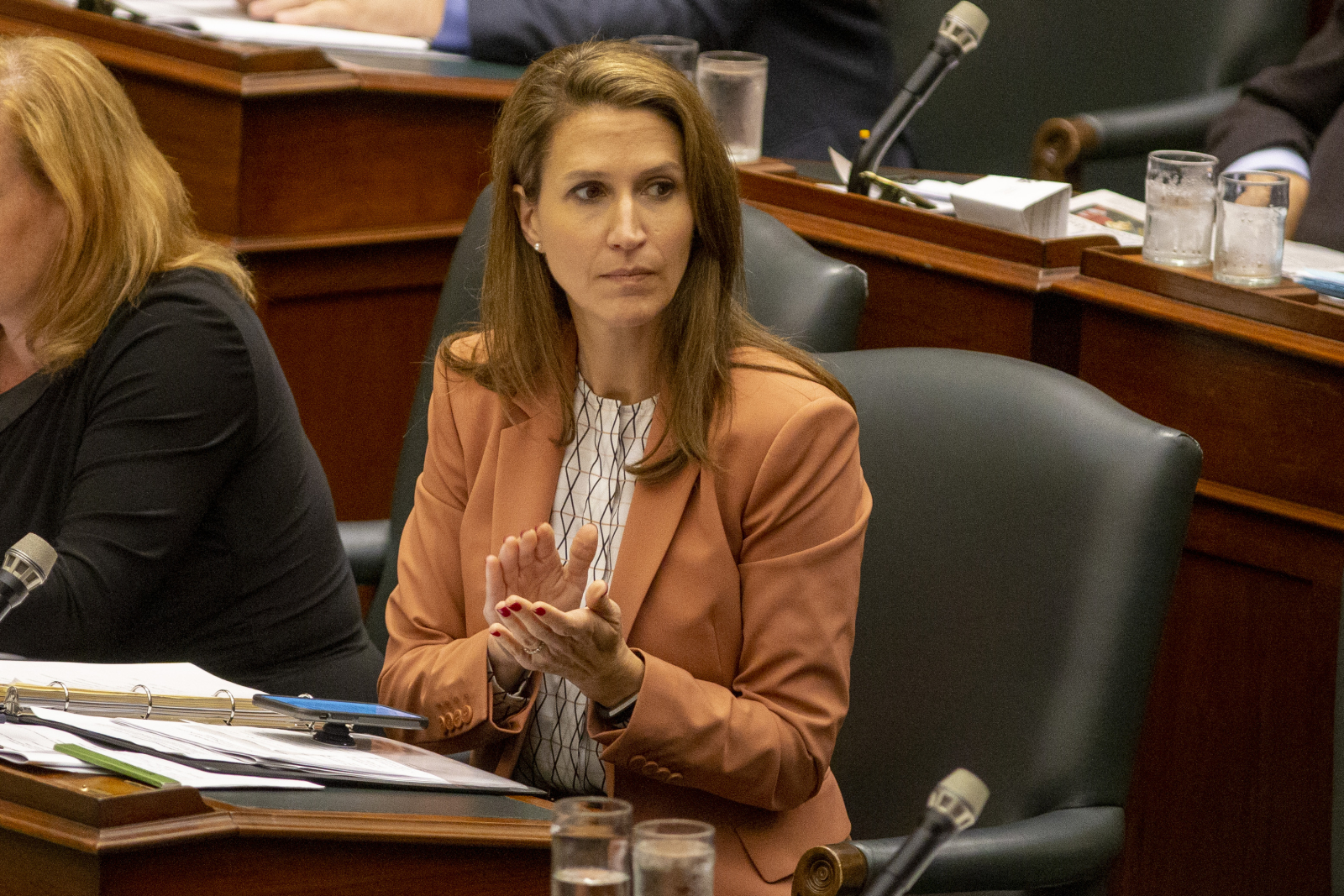 Legal Aid Ontario is cutting full-time jobs and imposing a hiring freeze after the Doug Ford government delivered the biggest budget cut in the agency's history.

In an email sent to staff Monday morning and shared with National Observer, Legal Aid Ontario (LAO) CEO David Field laid out a series of cost-saving measures including:

All of this is anticipated to save the organization approximately $16.6 million, Field wrote.

The changes come after the Ford government slashed the agency's budget by 30 per cent, meaning it had $133 million fewer to spend compared to its last budget of $456 million. The government said April 11 it was “streamlining the delivery of legal aid to promote long-term sustainability," and, in doing so, saving $164 million on legal aid spending each year starting in 2021.

In a statement to National Observer, Attorney General Caroline Mulroney said "The prior government spent more and more money on legal aid without achieving the results that legal aid’s clients or taxpayers should expect. With renewed accountability at legal aid, every dollar saved on lawyers is a dollar we can invest in public healthcare and education, the services that matter most to people.”

Legal Aid’s projected revenue for 2019-20 is $433 million, which includes $323 million in government funding, $98 million from interest on lawyers’ mixed-use trust accounts, and $12 million from client revenues.

The decrease is still substantial for LAO, according to Field's emails. In addition to job cuts, LAO will also be placing a compensation funding freeze for legal clinics and a halt on funding for one-time clinic projects to save an additional $15 million.

“Front-line services provided by LAO will continue and remain strong,” Field said in the email. “LAO carefully considered its expenditures in terms of its client service and accountability for public funds and has developed a plan which is guided by those considerations.”

According to Field's email, the agency is also making changes to the funding it provides to private criminal and family lawyers who represent low-income clients who can't afford counsel. Changes will also be made to discretion payments, which Field defined as payments over and above the regular fee paid to lawyers for case work. Details were not specified in the email for both of these impending changes.

“I know that the attached announcement will bring questions and concerns for you as staff,” Field told LAO staff. “I am confident that LAO will continue to be a major force in access to justice now and in the future. Meeting and talking to you is more important to me than ever before. Now is the time for constructive discussion.”

In an email response to questions from National Observer, LAO spokesperson Graeme Burk said the agency is still determining exactly how many jobs will be lost and what regulatory changes need to be made. "But our priority will be to minimize impact to staff in client-facing roles," he said.

"There is an overall sense that we have a challenging task ahead of us," he added. "But we also have a dedicated staff and stakeholders who see the value of our service and an important mandate to provide access to justice for all."

On April 12, Mulroney sent a letter to CEO David Field advising him of the agency's budget cut. “LAO is unsustainable in its current state,” Mulroney said in the letter.

Ontario Premier Doug Ford echoed that figure when he phoned in to the Alan Carter Show on Global News radio show on April 22 and said, “There is more money being spent on lawyer fees and less cases [at the LAO].”

“This is what drives me crazy, Alan — that no one does their research,” Ford said during the unscheduled call. “They need to be more informed. If they actually looked into it, there is more money being spent on lawyer fees and less cases. The people that actually need the system to help them, they aren’t getting the proper support. We have to hold these people accountable. When there’s more money to the lawyers and less money to the people, I’ve got an issue with it.”

“If anyone needs support on legal aid, feel free to call my office. I will guarantee you that you will have legal aid,” Ford added in the interview.

The LAO annual and quarterly reports and the most recent auditor general’s report do not support what the premier and attorney general are saying. The auditor general found there was a 23-per-cent increase in the number of certificates issued by LAO between 2013 and 2018.

Mulroney was asked about the Premier's "guarantee" during the legislature's question period Monday. In response, she noted the the "premier is very connected to the people of Ontario through his phone" and that the government "is committed to working with legal aid to ensure that those front-line services are preserved and are maintained."

She added that she was "proud" of the policies her ministry had proposed "to make sure that the programs that our government offers to the people of Ontario are done so in a sustainable way, all the while protecting the front-line services that the people of this province need most."

"Those who need legal aid can call the Ministry of the Attorney General or call legal aid, Mr. Speaker. The services will be there for those in need," Mulroney told the legislature.

Green Party leader Mike Schreiner said the government was "misleading" Ontarians by telling them they can simply call the premier or attorney general in the way of the funding cuts to LAO.

"This is not how government works. Neither the Premier’s Office nor the Attorney General’s office has the scope to replace the services provided by this chronically underfunded agency," Schreiner said in a statement. "Whether it’s legal aid or flood relief, the Premier must stop acting as if Dial-a-Premier is the most sustainable or responsible way to lead a province."

The Ford government has also said it will no longer provide funding for immigration and refugee cases. In his Monday email, Field reiterated what he previously told National Observer: that the agency is now solely working with the amount it receives from the federal government, which is anticipated to be about $13.5-$16 million in 2019-20.

Field said the agency will use remaining provincial funding in in interim to meet the payments to lawyers that were issued in immigration and refugee cases prior to April 16.

In a statement the office of the federal Attorney General David Lametti said they are "deeply disappointed to see the sweeping cuts the Ford Government has made to this important program."

"While provinces and territories are responsible for the management of their individual legal aid programs, our Government recognizes the importance of working with partners to ensure proper funding for these programs, including those relating to immigration and refugee legal aid," the statement said.

"We are actively engaged in conversations with relevant stakeholders and will continue to monitor the situation closely.”

Editor's note: this story was updated multiple times on April 29 with additional comments from Legal Aid Ontario, the government and members in opposition.

I have to be honest, the

I have to be honest, the truth is hidden under lawyers of garbage and I don't have the time to figure it out. What I do know is that this is a typical PC/Conservative cut. For most Isle of will go unnoticed until it is a full blown crisis and then the Liberals will have to try and fix it. Eventually they might, they may not even overspend in correcting it, but they will introduce other excessive spending and try to tell every adult they know what is best for them through an excess of behaviour need rules and regs. We the People of Ontario cannot win. It the same for Canada and probably every province.

UK style austerity is on the

UK style austerity is on the way for Ontario. How else are Ford's family and friends going to get richer.

You sure showed that Wynne woman what's what, didn't you? I hope you're happy.

Unfortunately, like much of the Western world or choices are all between different types of bad with good choices being very rare at all levels of government in all countries.

I don't think Mulroney has

I don't think Mulroney has anything to be proud of yet. All they seem to have done is cut the money, but not yet have a plan that can cope with it and deliver an effective end result for justice and that is going to be very complicated with a high likelihood of failure in the short term at the very least.

Streamlining legal aid services by cutting the budget by 30% or $133 million. And the one and only, the infamous Doug Ford, eliminates legal aid for immigrants with legal issues. Exactly. Even if you are an impoverished Canadian citizen, you cannot receive legal aid to help a relative immigrate to Canada. Or a refugee seeking asylum in Canada cannot receive legal assistance in Ontario. This is NOT Canadian! We live to help impoverished people come to Canada and build a strong, kind, generous society. Ford is weak and greedy, just like Scrooge and other characters depicted in Charles Dicken's novels. I cannot believe it but Ford wants to return to the 1850s when Oliver Twist had to beg for more soup. Who elected this feudal psychopath?