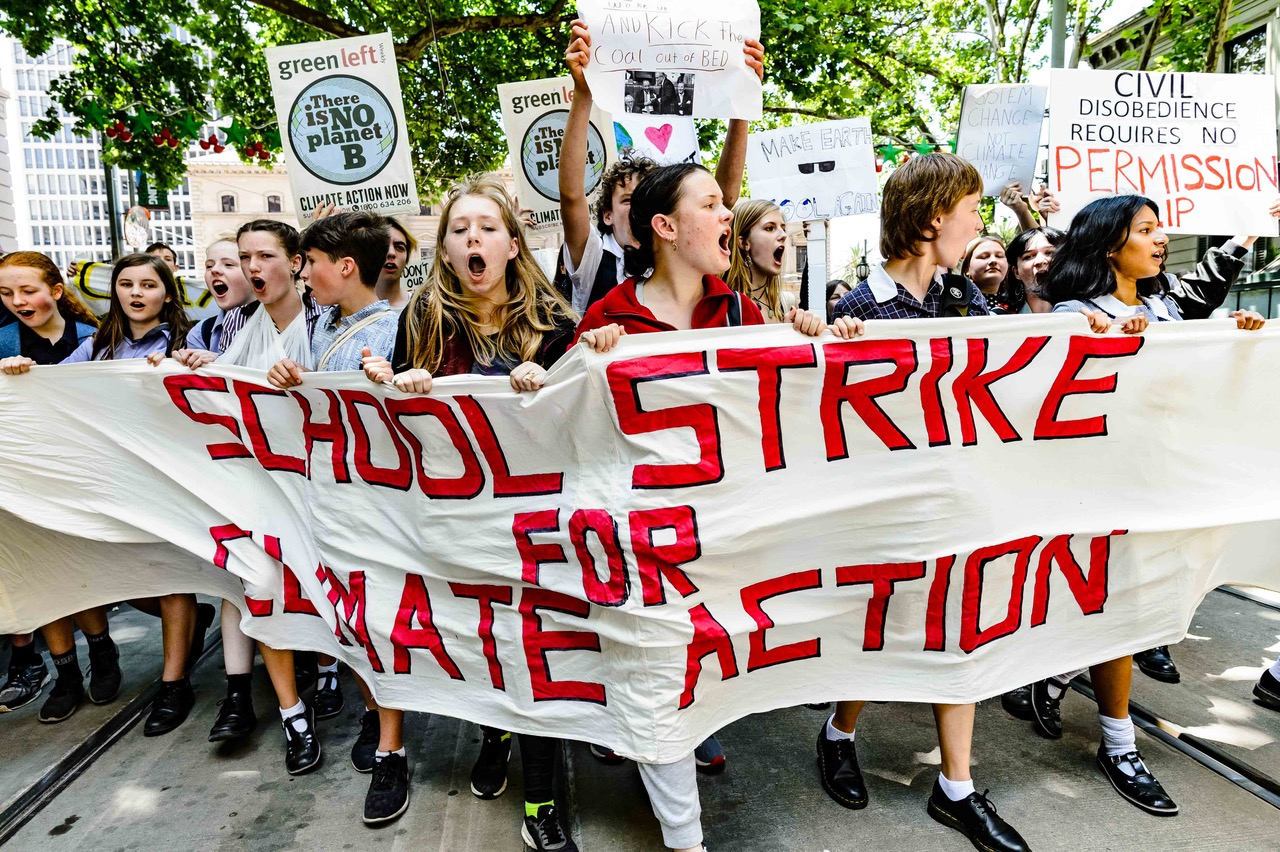 There’s a climate strike across Canada— and many other countries—on Friday, May 3. That’s tomorrow.

The strike is happening across Canada and the world. To find more about what, when, and where in Canada, go to the Climate Strike Canada site here.

On that note of youth activism, I want to introduce you to two young people who will be striking tomorrow. Rebecca is 16, and George is 23.

Let me preface this by saying I don’t talk to many people their age these days. I have a six-year-old son, and while he can hold his own—thanks to a variety of shockingly informative cartoons— on the names of dinosaurs and the feeding habits of a number of obscure animals (goblin sharks, black-footed ferrets), he is, well, six. There’s a limit to the integrated insights he’s going to have about social issues. But, as I’m just figuring out now, there are plenty of teenagers and twenty-somethings who do.

Like most people over the age of 30 who don’t work in an educational institution, my life isn’t set up well to allow me to talk much with those of Rebecca and George’s demographic. (Which, I hear, is roughly Generation Z.)

That’s a shame, because what they have to say is the most important thing on the planet at the moment.

You’ve probably heard about Greta Thunberg, the outspoken 16-year-old from Sweden who kicked off the Fridays For Future youth climate strike movement. (If you haven’t, you can read this Guardian profile to catch up—and then read this to see how a host of morally bereft right-wing apologizers are now scrambling to find ways to attack her.)

George and Rebecca represent the young Canadians who, like Greta, are rising up to fight for their future. They are already many. According to Climate Strike Canada, about 160,000 people turned out to the nationwide student strike on March 15.

“This is a mental health crisis”

George is a fourth-year UBC student studying economics and math. Through the UBC Climate Hub that he helped found, he’s been going into public schools to talk to elementary and high school students about the climate crisis.

He’s seeing firsthand something most people don’t: the debilitating emotional effect that global warming is having on young people.

“What I hear time and time again from students is that they feel scared and they feel paralyzed, and that they can't do anything,” he says.

So much of what young people hear these days from news, social media, and from their classes, George explains, “makes them feel like the world is going to end. Their understanding is that climate change is completely happening, and that animals and people on this planet are all going to die.”

Young people don’t possess the ultimately delusional ability most modern adults have cultivated —the knack of compartmentalizing global catastrophe and tucking it away on a mental shelf with all the other uncertainties of life.

As humans we’re used to ignoring vast, unpredictable things and dealing with them as they come up in the moment— isn’t that what living with climate, aka weather, is all about? You wake up, there’s rain, or there’s snow. Maybe a lot of snow. So you have to put on a jacket and boots and slog through it. You don’t talk about stopping it ahead of time. It’s the weather! It just does stuff, and we humans just deal with it.

This is our mostly unconscious response to global warming that the well-funded climate denial machine has twisted to its own ends. But this kind of learned passivity—part of the way we’ve evolved to assess risk and reward— is outdated.

And in any case, young people don’t possess it in the same way. They can’t as easily push catastrophe aside in favour of focusing on the next deadline or the next mortgage payment or the grocery shopping that has to get done. This is one reason we need to start listening to them.

Not many people—not enough— are talking about the way adult inaction on the climate crisis is hurting children. One person who is doing work in this area is University of Helsinki researcher Panu Pihkala, who is exploring the effects of “eco-anxiety” on people of all ages.

“At one extreme are the serious symptoms, such as shock and fear, which often have psychophysical manifestations, including sleep disorders and physical discomfort,” Pihkala was quoted as saying in a 2018 article. “At the other extreme there are less severe symptoms, such as melancholia and restlessness.”

Pihkala notes that “a key group” affected is children and adolescents, whose “mental processing capacity is still developing, making their potential for personal actions in the world of adults limited.”

I had an email from a friend a few weeks ago who told me much the same thing that George did. Her 14-year-old daughter, she said, was allowed to choose any topic in the world for a French oral presentation.

“She chose to talk about the different ways the world will likely end,” my friend wrote. “She believes it will happen in her lifetime.”

This anxiety about a pending apocalypse is bad enough. What makes it worse, George says, is the “profound dissonance” young people sense between the seriousness of climate crisis, and the fact that they don’t see adults—their parents, teachers, politicians—doing anything about it.

“So this is a mental health crisis,” said George. “Climate change is weighing on young people and we deserve to give them hope on climate change, the hope that they can have a future. I hear over and over from students that they are looking for that, they are craving that agency and that hope.”

Rebecca is an activist helping organize the youth climate strike movement in Vancouver. She's in 11th grade at Lord Byng Secondary; her favourite subject is geography, she loves to read, and she’s learning to play guitar.

“I’ve always been concerned about climate change,” she told me when we talked recently. “Growing up in Vancouver in the 21st century, it's always something I've known of. It's always been a dark cloud, obscuring the horizon of my future.”

In 9th grade she realized that “literally nothing else matters if we don't have an inhabitable planet,” and she began to act on climate issues.

Or rather, she tried.

“I spent a while trying to figure out how to get involved. Climate activism is normally pretty adult-dominated, and there weren’t very many youth spaces that I felt comfortable in.”

For her, youth environmental groups did not “address the crisis with the scale and urgency it required.” Most high school sustainability groups, she says, revolve around “recycling and other minor workshops,” which didn’t resonate with her or empower her.

“This problem is so much bigger than, you know, recycling our bottles and cans. It’s important, but that’s not going to solve the problem.”

She was in the midst of trying to figure out what to do when she read about Greta Thunberg.

“When I heard about Greta sitting outside of parliament and striking from school, it really resonated with me. She was dealing with a crisis with the urgency and scale that it so needed. She was literally saying, ‘I can't go along with my normal day to day life in the face of this crisis. I'm going to stop that, and put everything on hold to prioritize climate action.’ Which is what the entire world needs to be doing.”

In line with George’s experience, Rebecca has friends and peers who, because of the disconnect between the scientific facts of global warming and the societal response, feel like they’re crazy. They live in a world where the looming storm clouds of the climate crisis are cutting off their future, and they feel terrific anxiety about it—but meanwhile the adult world just rolls on as if nothing is the matter.

“What I tell young people is that first of all, you're not delusional for recognizing that the world is delusional. It's the world that’s crazy, it’s not you.”

The solution for youth getting out of paralysis, she says, is joining up with others and starting to act. Climate strikes are one way to do that.

“Get together with other people who also recognize that the world is delusional. Taking action is really the most powerful thing you can do, and the climate strike movement is hitting the problem from the root.”

She steers youth to the website, climatestrikecanada.org, which includes a map of all the strikes across Canada.

“There are strikes in most places, over 65 towns. Be a part of that. There are so many other people who are also working hard on this, and it's just such an amazing community. Get people together. They're out there.”

“We're not doing a small thing, like trying to encourage more biking to school. We are trying to change the whole system. The problem is just so overwhelming, but you need to start somewhere.”

Can we trust Mr. Trudeau to

O K. I just read David Suzuki's latest piece, "Stop fiddling while the planet burns", which started with "Will someone please tell me what the hell is going on?" If that doesn't wake you up, you need more coffee!!
It's no secret that effective action that voting-age adults can take involves politics. People: there's a federal election coming up!! And I am going to say it: as I'm involved with the federal NDP in Peter Julian's riding, and worked on Jagmeet Singh's campaign in the by-election, as well as spending time with Svend Robinson's campaign, there's major hope that the federal NDP can turn things around! The Courage Coalition succeeded in getting Mr. Singh to adopt some principles in the Green New Deal of the North - so far - which promise to make major changes in policy.
So for all those lazy Canadian voters out there, GET BUSY and GET INFORMED about the candidates in your areas!! Go ahead! Get out to candidates meetings and ask the uncomfortable questions, and DON'T take politico-speak for an answer!!
Thank you.

As a decades long loyal

As a decades long loyal member of the CCF, then the NDP. I now have voted Green for two election cycles. I suggest everyone seriously consider volunteering and campaigning and voting for a Green candidate in October. The NDP still does not have a coherent policy on what urgent Climate action would entail. For Jagmeet Singh to boldly support the Coastal Gas Link pipeline in B.C. (which would traverse unceded Indigenous territories) reveals a lack of understanding of what is required of the next government. IF we are to succeed in drastically reducing C emissions by 2030, and completely by 2050, then no new fossil fuel infrastructure can be approved or built nor can new fossil fuel reserves be developed. Period. And if we continue to ignore our colonial past/ and present, while pretending that all that is required for reconciliation is reading a land acknowledgement, shame on us! In this election we cannot allow either the Liberals or Conservatives to win a majority. We must work to elect as many Greens as possible, and if you can’t/won’t vote Green, then please go NDP, who at least have some other good plans. Then perhaps we can have a Minority Government with a healthy representation from the Greens and NDP. In my opinion, this is not the time for Party loyalty. It is, rather, time to step up to a politics that could/might be influenced by the public (not the hundreds of Industry Lobbyists) to ACTUALLY take immediate Climate Action!
Please, young people’s futures cannot be abandoned, not only here in Canada but globally.

Until we have proportional

Until we have proportional representation, a Green vote is still an ineffectual vote! As well, it stands to contribute indirectly to increased Liberal and/or Conservative support.