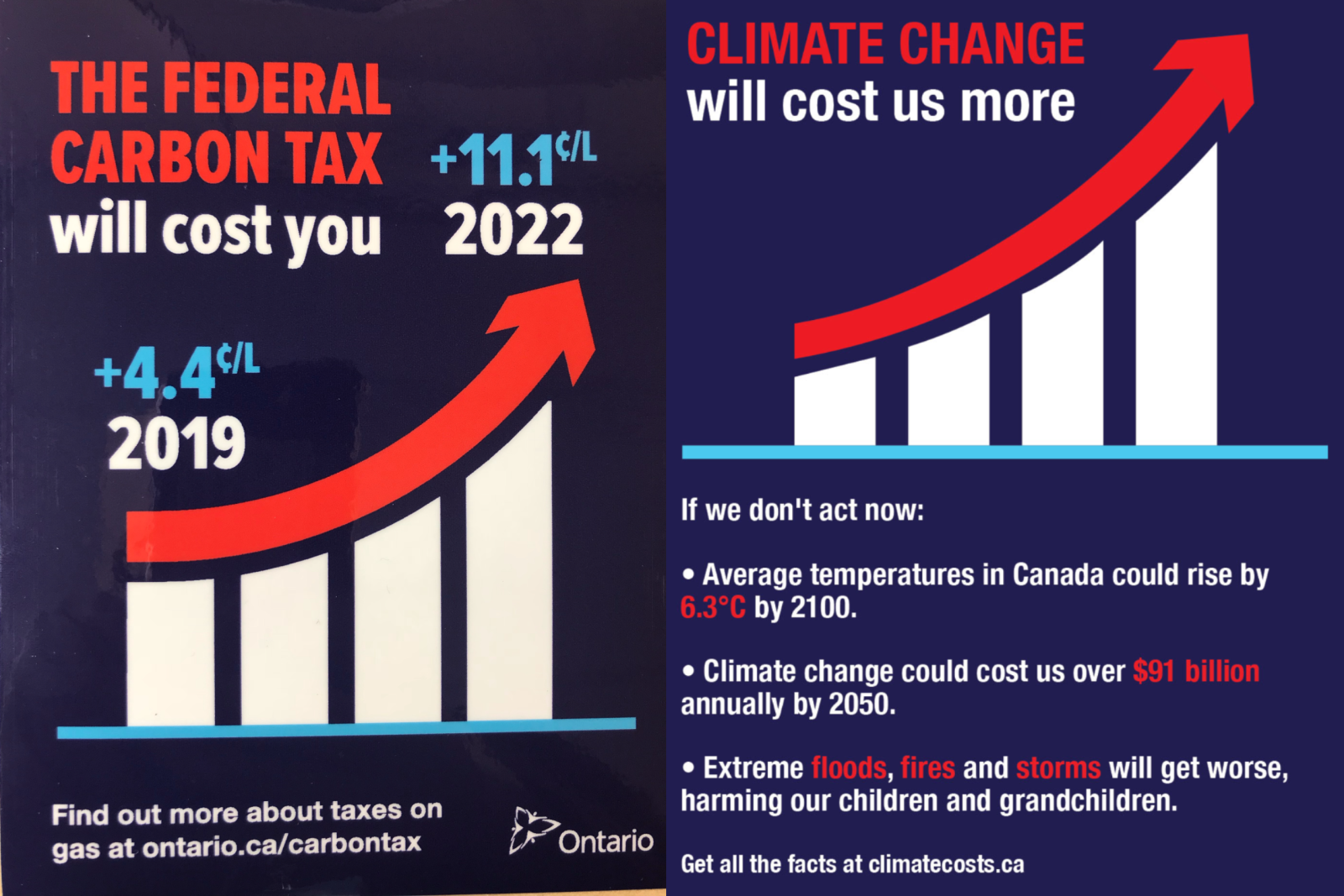 If you are the owner or operator of a gas station in Ontario, you now have two stickers to choose from to display at the pumps. One will inform customers about the costs of taking action against climate; the other will show the costs of doing nothing.

The two stickers are virtually identical, with both showing the same graph with a steep red arrow of ominous growth. Both use the same font and colours. The only difference is the message.

"Climate change will cost us more," the Green Party of Ontario's lookalike sticker says. “Climate change could cost us over $91 billion annually by 2050,” reads one of three bullet points on their sticker, which urges people to "get all the facts at climatecosts.ca."

On April 8, the Doug Ford government announced it will require all gas stations to put its stickers on gas pumps. The stickers don’t mention that the federal carbon pricing plan will provide rebates to most households which more than offset the rising costs of fuel (a family of four in Ontario can expect $307 back as part of their 2018 income tax return, the federal government says). The federal program was imposed on the province starting April 1 after the Progressive Conservative government cancelled Ontario's cap-and-trade program on its first day in office last year.

The government hasn't given a deadline for when these stickers need to be displayed by, but has said that any station that fails to post them will face fines of up to $10,000 per day.

The Ontario Greens revealed an alternative sticker on Thursday, which is being offered to gas stations on request. Their version show the costs of climate change, pointing out they could exceed $91 billion per year by 2050. They also cite a federal government report (PDF) from 2011 saying that average temperatures in Canada could rise by 6.3C by 2100, and that "extreme floods, fires and storms will get worse, harming our children and grandchildren."

The Green Party's stickers are party-funded as opposed to the government's, which are funded directly by taxpayer dollars.

“It’s outrageous that the premier is forcing businesses to be complicit in his anti-climate misinformation campaign. We’re inviting gas stations to make use of the stickers if they want to inform the public about the full costs of the climate emergency,” Green Party of Ontario leader Mike Screiner said in a statement.

Last week, the Ontario Chamber of Commerce urged the Ford government to reverse its decision about the stickers, calling them an example of unnecessary red tape on business with fines that are too onerous.

“It is both a new administrative burden and an increased cost to business thanks to the punitive and out-sized fines for non-compliance,” the chamber’s president and CEO, Rocco Rossi, said in a letter to the government.

The Canadian Civil Liberties Association says it intends to challenge the constitutionality of the stickers, claiming in a letter to Attorney General Caroline Mulroney and Energy Minister Greg Rickford that it violates freedom of speech by compelling gas station owners to post a political message.

The Ontario NDP has also asked Canada's chief electoral officer to investigate whether the stickers should be considered campaign advertising as the October election season approaches.

In addition to the stickers, the Ford government has launched an ad campaign on radio, TV and online against the carbon tax. It has declined to release the costs of the marketing campaign, but CTV reported the expenditure is a seven-figure number.

On April 16, Rickford said the stickers were being introduced to “stick it to the Liberals and remind the people of Ontario how much this job-killing regressive carbon tax costs.”

Rickford repeated the government's messaging in a statement to National Observer, saying that its "made-in-Ontario" plan "strikes the right balance between a healthy environment and a healthy economy by protecting Ontario’s natural resources and reducing greenhouse gas emissions without imposing an ineffective, regressive carbon tax on hard-working Ontario individuals and families.

“Our government will continue to hold the federal government accountable to the people of Ontario, and we will not stop promoting transparency for Ontario’s energy consumers," Rickford said.

But Schreiner said the government was misleading Ontarians.

“The extreme flooding across the country should compel us to have an urgent discussion about reducing pollution and preparing our communities,” Schreiner said in a statement. “Yet the premier wastes millions of taxpayer money to sabotage solutions. And he is cutting funding for programs that protect us from extreme weather by axing tree planting and cutting flood preparation programs,” he said.

“The premier is on the wrong side of history, and the people of Ontario cannot afford his scare campaign. We all deserve better, and I will continue standing up to defend our children and grandchildren."

Better hand those stickers out to activists because it is unlikely that the oil companies will allow their lease holders/employees to put thiese stickers on display. Independants might.

I hope the stickers have been supplied with the same adhesive the government uses for it's license plate dated permit stickers. Those suckers are impossible to remove! Up the Green grafitti campaign!

Agree, I thought right away

Agree, I thought right away that a Green coalition should produce a sticker that counters this political propaganda with a demonstration of the costs of climate change. We are far better to invest the money we have in methods of climate change mitigation, rather than thinking that later we can buy back a livable planet for other species and our own.

Alberta is our home province

Alberta is our home province but it does not feel like home any longer. The focus on profit at all cost is a frighteningly blind mantra of the destruction of our future. I would like to display the Green Party sticker on my Prius and will contact the Green Party in Ontario to purchase one. The conservative premiers of our prairie provinces need all the repetitive education we can provide them!