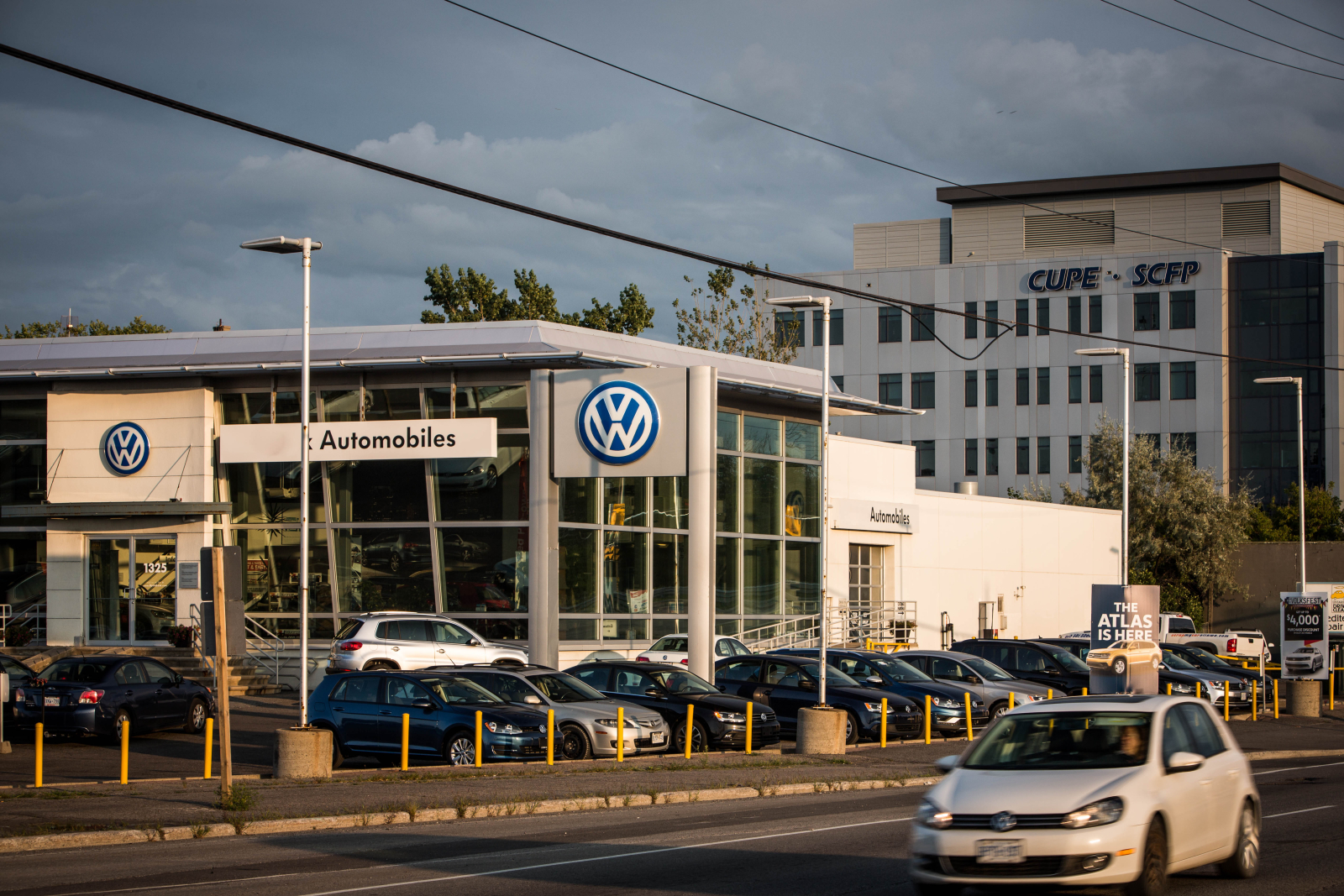 A motorist passes by a Volkswagen dealership in Ottawa on Aug. 24, 2017. File photo by Alex Tétreault
Previous story
Next story

Authorities from countries outside of the European Union are starting to take a close look at a new investigation that has once again landed Germany's car industry in hot water, less than five years after the diesel-cheating emissions scandal that battered its reputation.

The EU alleges that three major manufacturers, BMW, Daimler and Volkswagen, colluded to delay the introduction of cleaner cars on the consumer market in a case that could have legal implications in both Canada and the United States. The European investigation, which began in 2018, covers the development of emissions cleaning technology on both diesel and gasoline-powered cars.

If the allegations are true, it would mean that consumers were likely deprived of opportunities to buy cars with the latest clean technologies.

While the EU Commission's investigation focuses on vehicles sold in EU member states, a senior official familiar with the investigation told National Observer it has been contacted by a number of competition authorities from other countries and has shared information about the investigation with them.

The EU Commission published its preliminary findings in April after opening an investigation last September. The German carmakers have two months to examine the file, reply and request an oral hearing process. There is no set timeline for the EU to then reach a conclusion. The process could take more than a year.

“Companies can cooperate in many ways to improve the quality of their products. However, EU competition rules do not allow them to collude on exactly the opposite: not to improve their products, not to compete on quality," said Margrethe Vestager, the EU's competition commissioner said in a public statement released on April 5. "As a result, European consumers may have been denied the opportunity to buy cars with the best available technology.”

Competition law experts told National Observer that if the charges against the carmakers stick and implicate cars in North America, the case could prompt a flurry of public and private cases in North America.

The technologies being disputed are catalytic reduction systems that reduce nitrogen oxides from diesel car emissions and "Otto" particulate filters that reduce particulate matter emissions from gasoline-powered cars. The discussions allegedly happened at technical meetings between 2006 and 2014.

Florian Wagner-von Papp, an antitrust and comparative law professor at University College London, told National Observer that if the charges are proven and the affected cars were exported to Canada and the U.S., “you can count on the Canadian and U.S. competition authorities to also take action.”

A spokesperson from the federal Competition Bureau told National Observer that the bureau "could not confirm whether or not we are investigating this matter" for confidentiality reasons but that as a general rule, it "would not hesitate to take action if it becomes aware of evidence of anti-competitive conduct contrary to Canada’s Competition Act."

In Canada, the act prohibits competing companies from conspiring to control, prevent or lessen the production or supply of a product.

The U.S. Federal Trade Commission told National Observer that they could not comment on the existence of an investigation into the matter.

The companies could face fines of up to 10 per cent of their global annual turnover, but Daimler's is likely to be waived, given it has whistle-blower status. A spokesperson from the company told National Observer in an email that it does not expect to receive a fine. Volkswagen is also cooperating with the EU and will likely face a reduced penalty.

BMW faces the steepest fine. The company denies wrongdoing and stated in a release that “lawful coordination of industry positions on regulatory framework should not be equated with unlawful cartel agreements.”

This antitrust probe is atypical in that it involves a cartel that allegedly suppressed innovation through holding back environmental technologies and not a cartel involved in price-fixing or market-sharing. Innovation cartel cases are harder to argue because quantifying the level of harm caused by the collusion is difficult, explained UCL’s Wagner von-Papp. “How much were consumers harmed because innovation that would have been environmentally friendly wasn’t introduced? That’s much more difficult to calculate.”

The troubled German automotive industry is still reeling from 'dieselgate' in 2015, where it was revealed that Volkswagen sold around 11 million dirty diesel cars equipped with defeat devices that detected when they were being tested and improved emissions results. Mitsubishi, Daimler and its subsidiary Mercedes-Benz, Mazda and Honda were subsequently outed for emissions tests cheating.

BMW was careful to distance itself from defeat device chicanery in its statement on the antitrust case in its response to the EU's findings. “The BMW Group attaches great importance to the findings confirmed by the European Commission in its press release of 18 September 2018 that the ongoing investigations concern only potential violations of competition law and not deliberate unlawful manipulation of the emission control system. There is no allegation of this kind against the BMW Group," it wrote.

All three carmakers involved in the EU antitrust case enjoy significant sales in Canada. According to Global Automakers of Canada figures, Volkswagen and subsidiaries Audi and Porsche sold 118,022 vehicles in 2018, or just under six per cent of all national sales. Daimler’s Mercedes-Benz and BMW sold more than 45,000 vehicles each, or 2.5 and 2.3 of the national market.

Neither the European Union nor the carmakers disclosed to National Observer which vehicle models are implicated in the case. But if the charges against Daimler, Volkwagen and BMW hold and those vehicles are rolling on Canadian and American roads, it is highly likely the companies will be embroiled in legal tangles across the Atlantic.

Marcus Callaghan, a spokesperson from the Competition Bureau, told National Observer in an email that he was "not able to confirm whether or not we are investigating this matter. The Bureau can only confirm an investigation if it is made public in other ways, for example by a third party or through the filing of public court documents. Generally speaking, the bureau will not hesitate to take action if it becomes aware of evidence of anti-competitive conduct contrary to Canada’s Competition Act. For example, the Competition Bureau has had several recent cases in the automotive sector, including: An investigation of Volkswagen, Audi and Porsche related to false or misleading environmental marketing claims.”

In January 2018, the federal Competition Bureau participated in a class action settlement agreement reached with Volkswagen, Audi and Porsche over the diesel-cheating scandal. The carmakers agreed to shell out $290.5 million to affected Canadian customers and also paid a $2.5 million civil penalty.

Ariel Katz, associate professor of law at the University of Toronto told National Observer that it is "highly, highly possible that the Competition Bureau launches legal action, depending on the results from Europe. There have been several instances with international cartels where the investigation wasn't necessarily initiated by the Canadian bureau but rather in the EU or US."

UCL’s Wagner von-Papp said that if the allegations are proven, private citizens in Canada and the U.S. are likely to pursue damages action against the car manufacturers. “In the usual run-of-the-mill price fixing cases, that is something you will see with near certainty in the U.S., and sometimes in Canada, especially as it ramped up its collective redress scheme a few years ago.”

Private damages from follow-on action are often much higher than the public fines imposed initially, he said, and there is no leniency for whistleblowers.

However, in this particular case, private citizens will face the relatively difficult task of establishing the harm caused by the hold-up on innovation. On the one hand, these could be done relatively easily, if there are costs involved in retrofitting dirty cars to comply with environmental legislation. On the other, “just saying, ‘I want to drive a more environmentally friendly car?’ There’s probably nothing you can get for that through the courts,” Wagner von-Papp said.

This is nasty but not that

This is nasty but not that surprising and not that important. Sure, I hope they get hosed for it. But I'm much more interested in whether they colluded to suppress the introduction of electric vehicles. Honestly, if it weren't for Tesla refusing to play ball I bet half the models on the market, particularly in North America, wouldn't be. I have the very strong feeling that the car manufacturers had an agreement to tease electrics forever but never actually sell more than a handful--an agreement which held right up until Tesla made it clear they were going to eat the traditional companies' lunches if they kept on not bothering to compete.

We could use more technical

We could use more technical familiarity in automotive reporting. VW got creamed for NOx, but they did it to save great quantities of CO2 production. Nobody is complaining the car companies are all still selling us far more tonnage than we need. There is no good reason for a land vehicle to outweigh its average payload, just tradition, vanity, and induced fear. Ford gets kudos for their green cars, but they have almost stopped making them, in favour of dirty trucks.

Should we blame the company?

Should we blame the company? Or blame the thousands of customers who shell out big money for something they have no need of? My 2005 pickup has a 4 cylinder with way more power than I need to haul it's maximum load at speed limit. Averages about 34 mi/gal. Naturally there is no replacement available this year for any reasonable price.

Hybrids are beyond scarce to

Hybrids are beyond scarce to purchase in downtown Toronto. BMW does not seem to have any....
All the ads for 2020 vehicles are for gas fuelled ones. What is going on?
I believe that at least 60% of the population who can afford cars would purchase a hybrid if they were available. I would.