By Alastair Sharp | Analysis, Politics | May 15th 2019
#15 of 16 articles from the Special Report: Canada's Extraction Secrets 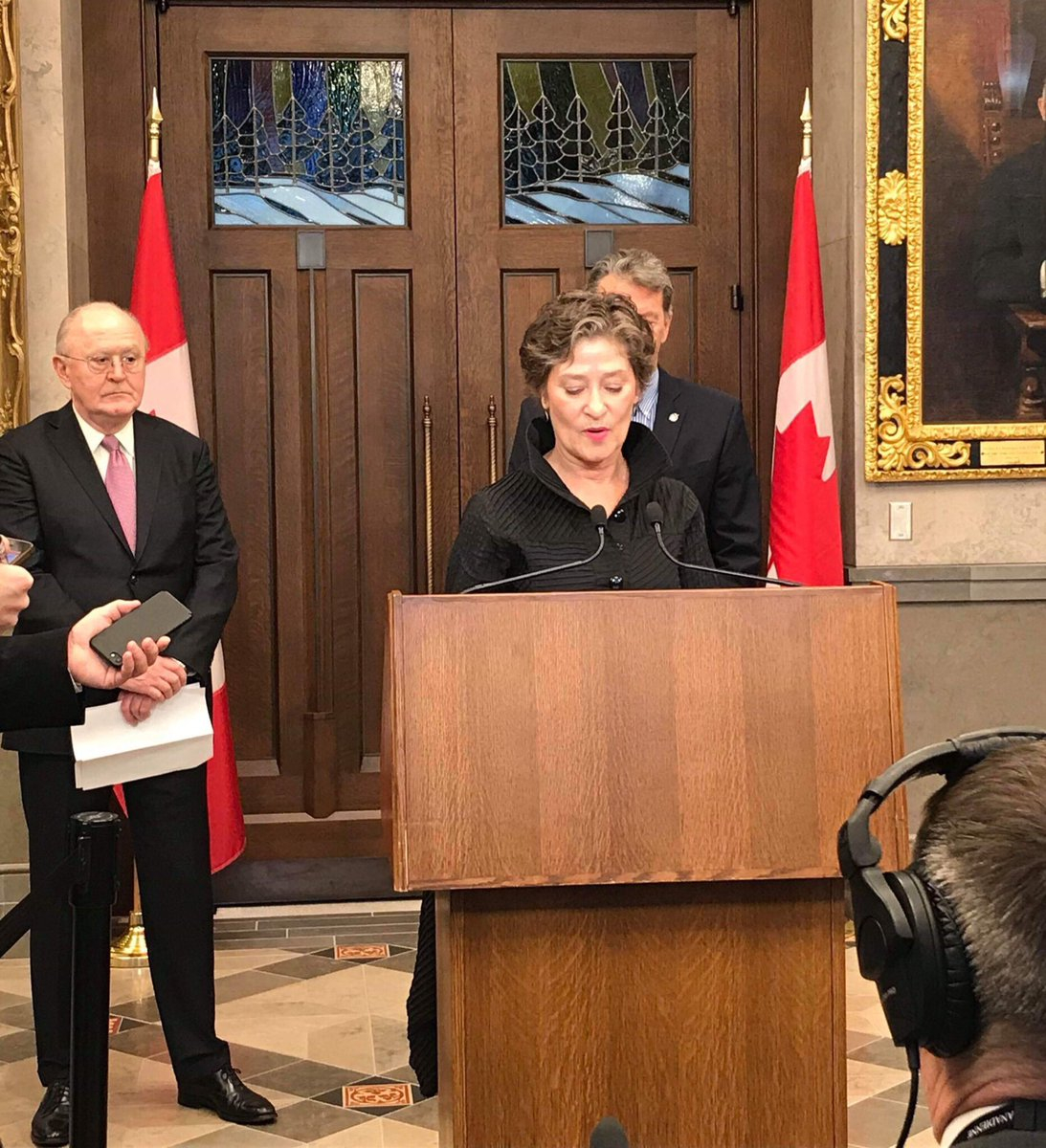 A new Trudeau government watchdog is getting a mandate to review the activities of whistleblowers and survivors of human rights abuses, which critics say further risks their safety rather than providing a forum for remediation.

The Canadian Ombudsperson for Responsible Enterprise (CORE), which was created to keep an eye on bad behaviour by Canadian companies abroad, is also facing separate accusations that it is merely a rebranding of an earlier failed functionary.

The cabinet decision creating the new office did not confer upon it the independence and investigative powers typically held by such bodies. Such powers would allow CORE to compel documents and witnesses and issue forceful recommendations based on what it uncovers.

"What we have right now, is an office that is called an ombudsperson but in substance isn’t any different from what we’ve had before, and isn’t going to provide recourse to people who are impacted," said Emily Dwyer, coordinator at the Canadian Network on Corporate Accountability (CNCA), in a phone interview.

The network is a project of the Steelworkers Humanity Fund run out of Ottawa that coordinates between some 30 member civil society groups, including Amnesty International Canada, the Canadian Labour Congress and the Canadian Catholic Organization for Development and Peace, all pushing for the overseas operations watchdog to be given sharper teeth.

Canadian companies in the mining and oil and gas industries abroad have been accused of complicity or involvement in a range of human rights abuses and environmental degradations across the world, often in countries without adequate domestic oversight.

For example, Barrick Gold, the world's largest gold miner, has been accused of being complicit in gang rape, house-burnings, shootings and other abuses at the hands of its security personnel or those of the countries in which they operate in ranging from Papua New Guinea to Tanzania to Dominican Republic, and faced a pointed question about it at its annual meeting in Toronto earlier this month.

Barrick also spilled cyanide solution into five Argentina rivers in 2014, shortly after firing an engineer who raised serious safety concerns about the mining operation responsible for the contamination.

SNC-Lavalin, the Quebec-based construction and engineering company, is accused of paying bribes to win contracts in countries with unsavoury governments, including Libya under long-time former leader Muammar Gaddafi.

Canada's former Office of the Extractive Sector Corporate Social Responsibility Counsellor, which reached the end of its mandate on May 18, 2018, was widely seen as not fit for purpose, Dwyer said.

The Liberal government promised in January 2018 to be a global leader in business and human rights with the creation of the CORE role. On April 8 this year, it named the first person to fill that role, lawyer Sheri Meyerhoffer, who started work on May 1.

The minister's press secretary Isabella Brisson said in an emailed statement in response to queries that the order in council creating Meyerhoffer's role allows the watchdog to "review a complaint that is submitted by a Canadian company that believes it is the subject of an unfounded human rights abuse allegation as one aspect of the mandate."

She may also review allegations of human rights abuse arising from a Canadian mining, oil and gas or garment company’s operations abroad, Brisson said. "Where criminal activity is discovered, the matter can be referred to the RCMP or other law enforcement," added Brisson. Meyerhoffer will also promote pan-national guidelines for responsible business conduct.

But allowing the companies themselves to call on the watchdog to look into alleged frivolous complaints is unnecessary and puts human rights defenders at further risk, while clogging up the system ostensibly designed to protect them, argued Dwyer.

“Around the world and in Canada there are lots of avenues for corporations to have their interests protected,” she said. “The reason you need an ombudsperson office is because people who are harmed by companies around the world have nowhere to go."

Meyerhoffer was a lobbyist for the Canadian Association of Petroleum Producers in the 1990s and a consultant for natural gas producer Encana in the 2000s, according to her LinkedIn profile. She also sought to gauge the interest of Cuba's government in developing its oil and gas resources between 2001 and 2003.

More recently, Meyerhoffer co-founded a charity that aims to educate, train, coach and mentor women lawyers in developing countries, and worked as a consultant and contractor to the mediation division of the United Nations in New York City.

She supported Nepal’s peace and constitution building processes from 2007 to 2017 as project director for the Canadian Bar Association and head of mission for the International Institute for Democracy and Electoral Assistance.

Carr had said it was worth waiting to find a candidate as qualified as Meyerhoffer to fill the role, and that she would work with legal experts "on a very narrow timeframe" of four or five weeks to determine appropriate powers, including whether she could apply sanctions.

That was five weeks ago this Monday. Dwyer said the government could have assigned those powers to the watchdog by creating new legislation, or by referring its order in council directly to the Inquiries Act. It was instead referred to the Public Service Employment Act, the same as the previous corporate social responsibility counsellor.

"They could receive complaints, review complaints, provide advice to companies," she said. "What makes a real ombudsman, how it adds value, how it fills the gap between mediation-based mechanisms and Canadian courts, is through this independent and public reporting function."

The Inquiries Act already lays out the powers and mandate needed for CORE to be an independent office able to investigate allegations with a focus on "furthering our human rights obligations" and which "does not allow the office to be used to put human rights defenders around the world at more risk,” Dwyer said.

Meanwhile, while Meyerhoffer has assumed her role, Carr has not settled on what exactly she is allowed to do.

The previous international trade minister, François-Philippe Champagne, had said definitively in January 2018 that CORE would be "mandated to investigate allegations of human rights abuses linked to Canadian corporate activity abroad."

On April 8, when introducing Meyerhoffer, Carr noted that he was seeking a legal opinion on CORE's investigative powers.

He said Meyerhoffer would "have the mandate to jointly and independently review allegations of human rights abuses arising from Canadian company operations abroad in the mining, oil and gas, and garment sectors" and would be "empowered to report independently, to make recommendations, and to monitor their implementation," with the scope of her work expected to expand to other sectors within a year of taking office.

"Our government remains committed to ensure the ombudsperson has the legislative and policy tools required to guarantee compliance with information requests, for example, the compelling of witnesses and documents in the very rare circumstances where a company is not fully and appropriately cooperating," added Carr.

"Should a company be found not to be acting in good faith, she will have the power to recommend withdrawal of trade advocacy support and future Export Development Canada financial support."

Brisson confirmed that the minister was still pursuing the legal opinion. "The minister is seeking external legal advice to ensure the CORE has sufficient tools to engage in credible and effective investigations of alleged human rights abuses," she wrote.

"This advice will consider the legislative and policy framework surrounding Canada’s approach to responsible business conduct abroad to provide the CORE with powers to compel witnesses and documents on an ongoing basis."

While standing next to Carr in April, Meyerhoffer said she'd want as many tools as possible, but also that some of them should be used sparingly.

"I think that these dire situations are fewer than there are situations that require some mediation, negotiation," she said. "In cases where there's more critical, immediate action required, it's important for the office to have the relevant tools."

Brisson did not respond to questions about why the minister did not explicitly grant these powers, whether he was concerned companies might use this mechanism to clog up the office's workflow, or a request for a phone interview with the minister, before publication.

She also did not respond to questions about why the government did not assign the watchdog powers under the Inquiries Act, or legislate its creation to make it more difficult for future governments to retract.

Dwyer said that without independent investigative powers, Meyerhoffer won't be able to make findings about what happened. That means she "can’t make real, concrete recommendations about what should be done differently in the future to prevent this kind of harm and how to effectively remedy what has happened," she said.

The United Nations guiding principles that CORE's mandate references define remedy as including “apologies, restitution, rehabilitation, financial or non-financial compensation, and punitive sanctions (whether criminal or administrative, such as fines), as well as the prevention of harm through, for example, injunctions or guarantees of non-repetition.”

"For these public reports to be meaningful, independent investigation is the crux," Dwyer said. "It is the thing that enables all of the other functions of the ombudsperson’s office to function."

Good grief - what a reversal

Good grief - what a reversal of intention! How do politicians so easily succumb to the manipulations of corporate lobbies?. Now we have a female ombudsperson (immediately signals lack of government priority as for example the failure of the liberals to pursue more equitable voting systems for which Miriam Monsef carried the can) who will no doubt be another sacrificial lamb being given no effective tools to pursue the malfeasance of corporations and instead, being directed to investigate the "whistleblowers" - many of whom, especially in Central/South America are indigenous women who are already being killed and persecuted by the combined forces of the corporations and their complicit local/national/or paramilitary vigilantes. This is the best the Liberals can do? Shame, shame, shame!

The hypocrisy of the Minister who wrote to me explaining the difficulty of conducting investigation in non-Canadian jurisdictions as the major stumbling block to proceeding with the promise is stunning. That difficulty does not seem to phase them when it comes to investigating the hapless "whistle blower"/victims!

Well, I can only hope that Sheri Meyerhoffer has the intestinal fortitude to call out the failures of this half crippled CORE project and lay the blame where it belongs, on the corporations and their undue influence in the halls of Parliament!