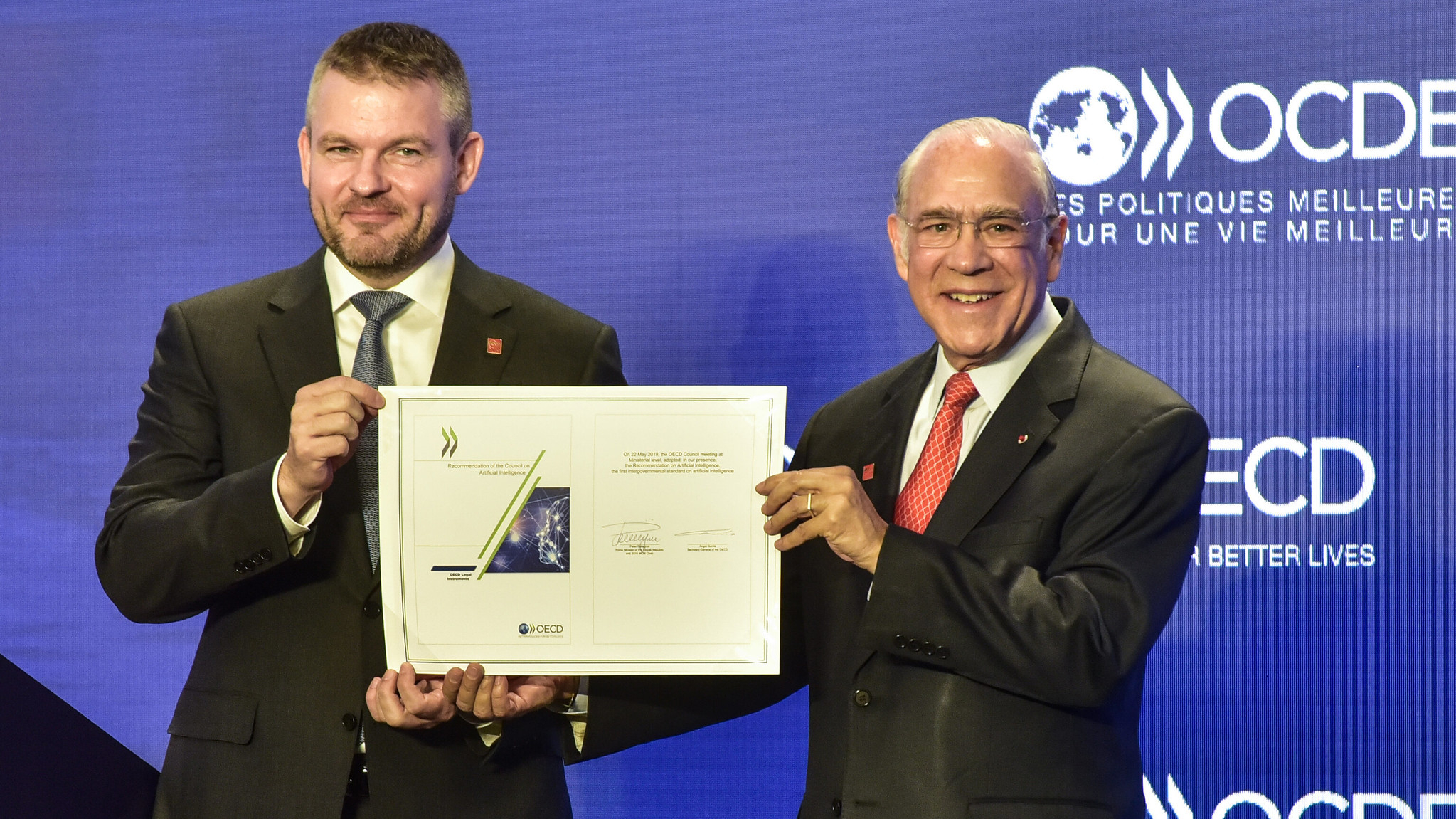 Canada and the United States joined forty other countries in adopting the first ever set of intergovernmental rules on the use of artificial intelligence (AI) at a conference in Paris on Wednesday, as the technology promises potential benefit and fuels ethical and other concerns.

The four-page document the nations' representatives put their signatures to stresses AI should be developed and implemented fairly and safely, urging governments to create policies for “responsible stewardship of trustworthy AI.”

The guidelines were drafted through an initiative led by the Organization for Economic Cooperation and Development (OECD), which brought together more than 50 experts from industry, 20 governments, civil society and tech companies. They aim to provide a stable environment for the development and implementation of AI through shared fundamental values.

“AI technology is still in its infancy and its potential remains to be realized," OECD Secretary-General Angel Gurría said at the official adoption of the principles on 22 May. "And while AI is driving optimism, it is also fueling anxiety and ethical concerns,” he added.

The principles include five value-based principles for the development of AI and five recommendations for public policy. The document states that AI should benefit people and planet and be designed in a way that respects the rule of law, human rights, democratic values and diversity. AI systems should be transparent and safe. Their risks should continually be assessed and managed. And those developing, deploying or operating AI systems should be held accountable for their use of the technology, it reads.

Artificial intelligence is already displacing some human employment, and unease about how far that trend will go will need to be dealt with as its application to more problems grows. As a general purpose technology it will affect all fields, and so the principles deal with all the potential consequences and benefits of AI from the economic impact for workers to how data gathered will be used for healthcare, traffic management, advertising or any other purposes.

The principles are not legally binding but it will allow the OECD to monitor and compare the progress of the 42 signatories in their development and use of AI. The OECD also has a history of producing policy documents that contribute to later national and international legislation. Their 1980 privacy guidelines, which highlighted the need to set limits on the collection and use of personal data, was the groundwork policy which the European Union considered for its General Data Protection Regulation law.

The OECD is a 36-member club of developed countries that describe themselves as committed to democracy and the market economy. All members signed the AI document, as did Argentina, Brazil, Colombia, Costa Rica, Peru and Romania.

OECD officials in charge of the initiative said they were satisfied that many countries worked together to develop and agree to the principles and they hoped more countries will adopt them.

“Our ambition goes far beyond our membership,” said Andrew Wyckoff, director for science, technology and innovation at the OECD.

While the United States under President Donald Trump has been pulling away from international agreements and institutions such as the Paris climate accord, NATO, and the UN, U.S. government officials participated in the drafting of the principles which the country later agreed to adopt.

U.S. President Donald Trump himself had called for regulating AI in an executive order in February. The executive order also aimed to promote cooperation with foreign powers.

An official at the OECD also said the United States adopted the principles because they wanted to keep some control over international agreements on technology and were worried that Europeans were becoming the global rule-setters since the General Data Protection Regulation.

“During the whole process of negotiation, the US have been making compromises with the other countries and stakeholders,” said Anne Carblanc, head of the OECD's digital economic policy division.

The @OECD Recommendations on #AI send a strong message that America and our partners stand together in unleashing AI innovation, understanding that it is an essential tool to drive economic growth, empower workers, and lift up quality of life for all. #OECDForum2019 #GoingDigital pic.twitter.com/WUvAnojvU6

The United States is home to some of the world’s biggest technology companies such as Google, Amazon, Facebook and Apple. China is its main competition with the second most investment in AI startups. The country, which is not a member of the OECD, sees AI through different eyes. The country has used the technology to increase surveillance on its population, among other uses.

Gurría, the OECD's secretary-general, confirmed more general fears around the development of AI.

"There are questions around the trustworthiness, the robustness of AI systems including the dangers of codifying or reinforcing existing biases related to gender, race, or infringing on human rights of important values like privacy," he said during his opening address.

The United States was among signatories keen for the document to reinforce democratic values centred on human rights, officials said.

“With [their participation], the US was keen on establishing a certain path that was more in line with the OECD and our values,” said Wyckoff.

Artificial intelligence has been a focus of international discussions this year, and the OECD AI principles will be discussed at a G20 summit in Japan on June 28 and 29. OECD officials and experts are developing a more practical document for the implementation of the principles.

Artificial intelligence has also been the focus of the G7 hosted by France. The country’s president Emmanuel Macron has partnered with Prime Minister Justin Trudeau’s government to push for strong cooperation. In late 2018, both countries announced the creation of a group of international experts on AI, which would be modeled after the International Panel on Climate Change. During a G7 meeting of ministers of digital affairs in May, Canada and France unveiled more details about future international group IPAI (International Panel on Artificial Intelligence).

The European Union unveiled its Ethics Guidelines for Trustworthy AI in April. The document, which establishes consensus among EU members, mentions the importance of human agency and oversight of AI systems and the need to ensure respect for privacy and data protection. The document ​​​​represents a first step toward practical guidelines and potential regulation in the future.

Transforming health care with AI: tons of potential, but not without pitfalls

"The country, which is not a

"The country, which is not a member of the OECD, sees AI through different eyes. The country has used the technology to increase surveillance on its population, among other uses."
Uhhh . . . and that's supposed to be different, how? I'm sure the NSA use them some AI to wrangle their storing-the-whole-internet schtick.