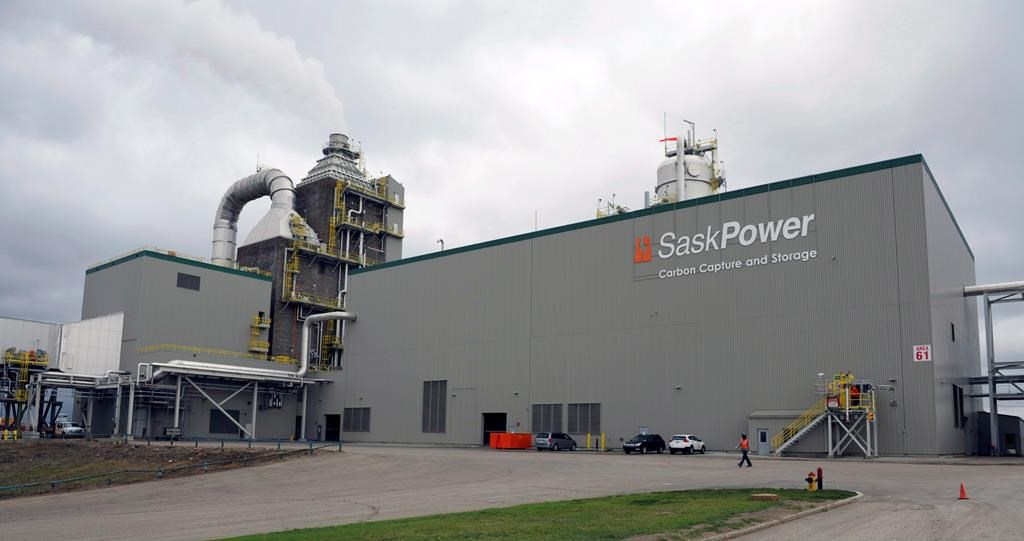 The SaskPower carbon capture and storage facility is pictured at the Boundary Dam Power Station in Estevan, Sask. on Thursday, October 2, 2014. File photo by The Canadian Press/Michael Bell
Previous story
Next story

The mayor of a southeastern Saskatchewan city says he's frustrated by a lack of government announcements on the future of a technology that would allow coal-fired power plants to stay open.

Roy Ludwig of Estevan says he wants carbon capture and storage capacity expanded to the Shand Power Station and to an additional unit at Boundary Dam where it already exists.

The one unit at the Boundary Dam that uses carbon capture is being allowed to stay active beyond 2030 — the year Saskatchewan has agreed with Ottawa to shut down most of its coal-fired plants.

Last year, SaskPower cited the low cost of natural gas when it decided against expanding the technology to at least two other Boundary Dam units and to study the feasibility of doing so at Shand instead.

Ludwig said people living in his city are nervous and he wants to see the province expand the technology to keep coal miners working.

"We support this provincial government and we expect them to support us," Ludwig said in an interview with The Canadian Press.

Premier Scott Moe has said carbon capture and storage is part of a conversation taking place about cleaning up Saskatchewan's emissions profile.

"You don't just commit to a technology," he said on the last day of the spring legislative sitting in May.

Ludwig has a background in the coal industry and expects the decision to shut down both units at Boundary Dam by 2024 instead of retrofitting them with carbon capture technology to put 100 coal mining jobs at risk.

"That's going to be huge," he said. "These are all people that have well-paying jobs and have families in our community."

Farming, oil and gas, and coal mining are staple industries in the city, Ludwig said.

Estevan has formed a committee with local leaders to look at what businesses can be expanded or attracted to the area in the face of a move away from coal.

Officials are also in talks with different cannabis producers to develop greenhouses for growing product and are looking to expand into warehousing, Ludwig said.

About 200 kilometres to the west, the town of Coronach is also looking to hire a consultant to help broaden its economy.

"Honestly we don't even know where to begin," said mayor Trevor Schnell.

It looks like hundreds of jobs could be lost in about 10 years, he said, and Coronach needs to be prepared.

A request for proposals posted to the province's buying and selling website says the Poplar River Power Plant and the Westmoreland Coal Mine have been the main employers in the southern region for decades.

"The socio-economic impact of their proposed shutdown will affect over 300 workers directly, as well as a yet undetermined impact on trading area businesses/communities within a 100-km radius," the online document reads.

"The quality of life and emotional state of local and regional residents are already being impacted."

The primary purpose of the

The primary purpose of the Boundary Dam carbon capture project was not to reduce GHG emissions. The main purpose was to save the power plant and provide a low-cost source of carbon dioxide for enhanced oil recovery.
It not only went over cost to build the carbon capture system but also did not delivered the amount of carbon dioxide negotiated with Cenovus Energy for use in its enhanced oil recovery project.
SaskPower don't want to invest any more money in a project that is losing money, has seen the price of Kw/H go up, did not really bring down GHG emissions and had cost (and will cost) Saskatchewan taxpayers millions of dollars.
The foremost goal of the CCS project is to keep the aging plant from becoming a stranded asset. Without CCS, the Boundary Dam power plant would have to be shut down by 2020.
(source: wikipedia.org/wiki/Boundary_Dam_Power_Station)