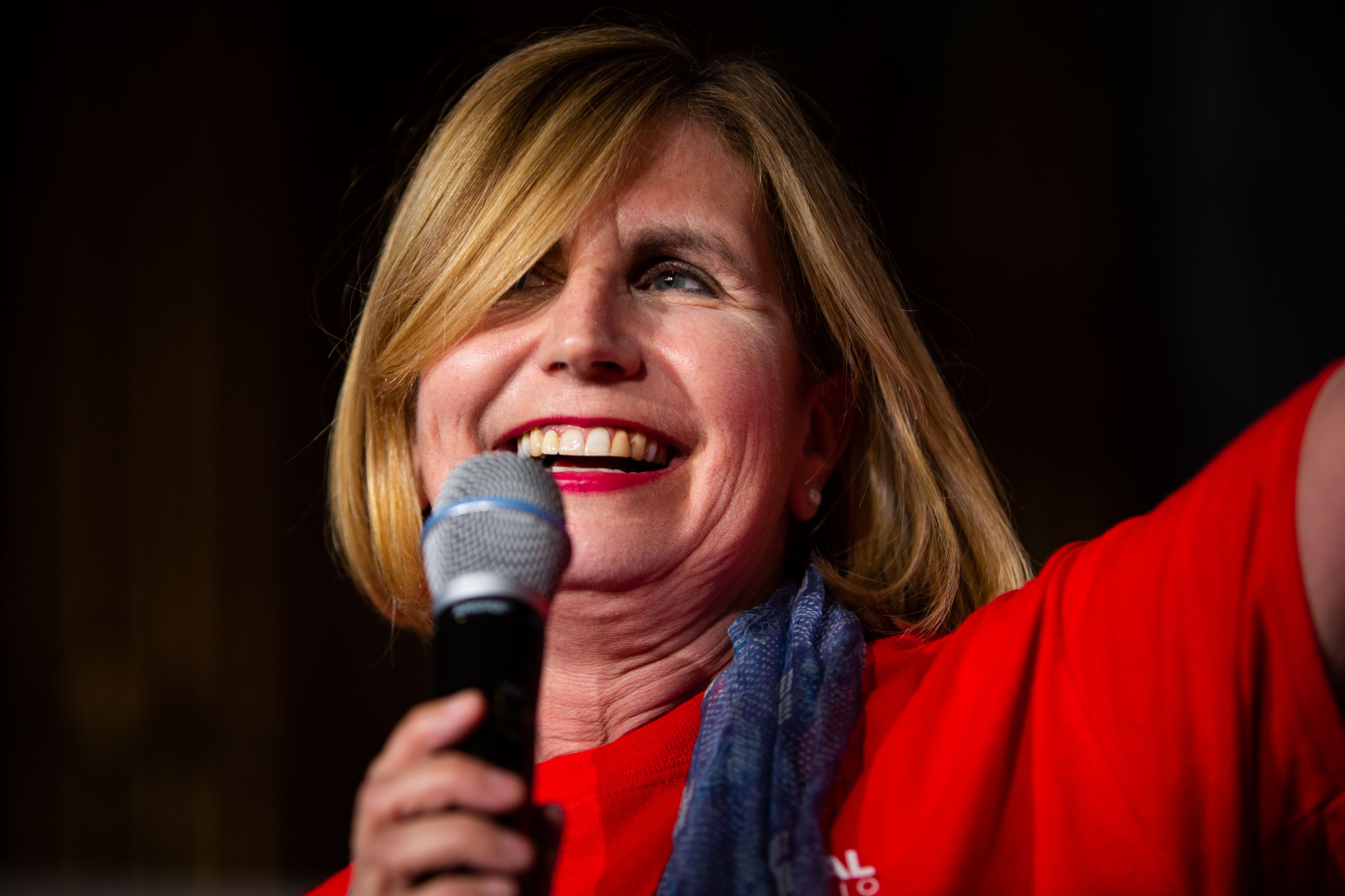 Nathalie Des Rosier, MPP for Ottawa—Vanier, introduces Kathleen Wynne, then premier and leader of the Ontario Liberal Party, during an election rally in Ottawa, in May 2018. Photo by Alex Tétreault
Previous story
Next story

Liberal MPP Nathalie Des Rosiers was the one who momentarily hushed the din inside the Ontario legislature during one of the most chaotic weeks in its history.

It was September 2018, and Doug Ford, the newly elected premier, had threatened to invoke the notwithstanding clause — a provision in the Canadian Constitution that allows a government to override entrenched rights — in order to slash the size of Toronto city council in the midst of a municipal election. No other Ontario government had ever taken such action. And Ford said at the time that he “won’t be shy” about using clause repeatedly if the courts tried to thwart his agenda.

As the walls of the legislature shook with the audible anger that echoed from protests on the grounds of Queen’s Park, Des Rosiers — a legal scholar, co-editor of the 1,168-page Oxford Handbook of the Canadian Constitution and one of seven elected members of the defeated Liberal Party — quieted the rowdy chamber with pointed questions and an impassioned speech in response to the premier’s threats:

“When one government decides to use the 'notwithstanding' clause, the next one will do it as well. And you may not always be in power. It could be a government that wants to use it in a way that you are not comfortable with. The charter is there to protect us from the tyranny of the majority who could exercise power to deprive minorities of their rights because minorities don’t have sufficient numbers to influence electoral outcomes. But human dignity of all matters. We are a better province because we have respected the charter over the years.”

Des Rosiers, who on May 16 announced she would resign her seat in the legislature to become a principal of Massey College at the University of Toronto, says she's proud of that moment, calling it the pinnacle of her short career in politics, which lasted just shy of three years.

“I worked hard on it and it reflected very deeply what I felt,” she told National Observer in an exit interview. “I was against interfering in an election no matter what.”

The entire summer of 2018 shed light on the holes in the legal system that have always been there, Des Rosiers said. The Ford government was "quick to let go of some conventions." A virtual-consensus held that the notwithstanding clause was dangerous, but the Ontario government wasn't moved.

"I think this shows we may need to reflect on how will we curtail this potential explosive tool that could undermine pretty much all our civil liberties," Des Rosiers said.

Ontario’s legal system and Canada’s constitutional experts need to have a hard conversation about “when and if it is necessary to use the notwithstanding clause, what does it mean to have an unwritten principle of democracy in our constitutional framework, and does that mean you should never interfere in an ongoing election and what’s the limit to that,” she said.

Des Rosiers said she has a large portfolio of ideas for scholarly articles that will further these conversations.

She said she had decided to leave politics before the opportunity at Massey College came about, citing personal reasons she doesn’t wish to disclose. The decision was hard for two main reasons, she said: She loves her riding of Ottawa—Vanier, and she’s leaving behind a broken and much reduced Liberal Party, which now faces a risky byelection to decide her replacement in the legislature. (Ironically, Des Rosiers herself was elected in a byelection, in November 2016, to replace former Ontario Attorney General Madeleine Meilleur.) The departures of Des Rosiers and fellow Ottawa MPP Marie-France Lalonde, who is vacating her seat to run in the federal election, leave the Liberals with five members.

In her short time in opposition, Des Rosier served as house leader and became the main advocate, along with Green Party Leader Mike Schreiner, for more participatory rights for independent members. When the Liberals didn’t win enough seats to retain official party status, Des Rosiers and her colleagues in caucus became independents, as far as parliamentary rules were concerned.

She says she felt her voice was silenced, her ability hold the government to account curtailed and her right to have questions answered shut down entirely. The Ford government didn't provide her office with technical briefings about complicated matters. She had one staff member to offer amendment to bills that were hundreds of pages long. And she has many questions she was never able to ask.

She invokes Pierre Trudeau on this issue, recalling that he was an advocate for a strong and capable opposition.

"We are a deliberative democracy, which means you deliberate, you listen and you're supposed to constantly think about what is it good politically, but more importantly what is it good for Ontario in the long term," she said.

She has two departing words for the Ford government: "good governance."

I am asking @C_Mulroney and the lawyers in the @fordnation caucus to resign. You were not elected to do this. This is not a case to use the #notwithstanding clause. Do not vote for it. #ONpoli #Constitution

'It's supposed to be a parliament'

If Des Rosiers had stayed in politics, she would have wanted to be attorney general.

As the former president of the Law Commission of Canada and a past general counsel for the Canadian Civil Liberties Association, Des Rosier spent long stretches of her career telling governments "don't do this, do this." And so, in 2016, she decided to leverage her legal expertise to actually change policies herself.

In her one year in opposition, she tied a record for the most private members’ bills. Among them was legislation that would have obliged the attorney general to inform the house — and to inform Ontarians — about possible rights violations. Others sought to guarantee the bilingual character of the City of Ottawa, amend the human rights code to include genetic discrimination and reform the jury system and solitary confinement.

"It's a way to advance debate," she said of her bills. "You're pushing ideas out. You're maybe stimulating some reflections in your colleagues."

There are two more private members' bills she wished she could have tabled before she left. One was to strengthen the powers of the environmental commissioner, whose duties have now been folded under the Ontario auditor general's mandate. The province's environment minister said the new commissioner would have the same role the federal environmental commissioner had, and Des Rosiers wanted to ensure that. She wanted to make sure the new commissioner could do a report on her own without the auditor general needing to approve it, and that the report would still be tabled in the legislature.

The second was to "beef up" the powers of the integrity commissioner, who Des Rosiers believes was prevented from investigating senior government staffers’ involvement in the appointment of Ford’s longtime friend Ron Taverner to the top police position in the province.

In reflecting on the year in politics, Des Rosiers says she worries about the future of the province as Ford ignores legal convention after legal convention. She recalls a conversation with Progressive Conservative MPP Ernie Hardeman, now minister of agriculture, who once told her, "We should be intensely partisan during the electoral period, but after that we should work differently."

Des Rosiers will not return to the legislature when it returns on Oct. 28, one week after the federal election. In a testament to the respect the longtime civil-liberties advocate holds across party lines, she received two standing ovations in the chamber during question period on June 6.

As she departs, she hopes that, after the October vote, the Ford government "will start recognizing that you cannot always be in electoral mode."

"It’s supposed to be a parliament, which is a recognition of all voices being heard," she said. Question period isn't about "cheerleading questions" and committees aren't about "talking points."

"It'll take some time, but I think some of them will start raising their voice," she said hopefully. "I believe in parliamentary system and I believe that good parliamentarians are needed and should work hard."

I applaud Nathalle Des Rosiers commentary and warning for the current Ontario Government. Her parting words, "good governance", harken back to the REAL founders of Canadian self government and democracy, Robert Baldwin and Louis Lafontaine. Their alliance in the early 1800's provided the essential political foundations leading up to Confederation. Their decades long struggle against the colonial and mercantile oligarchies that ruled Upper and Lower Canada during its wholly dependent colonial period strove to achieve effective self governance under principles of a re-sponsible, electoral process were, and are, the bedrock of Canadian democracy.

"Fordnation" is the antithesis of "good governance" and much more closely resembles the "Family Compact" that ruled Upper Canada like a private fiefdom. How easily we can regress from democracy to oligarchy when we let fear rule our lives.

It makes me sad how dumb

It makes me sad how dumb businessmen always prevail.