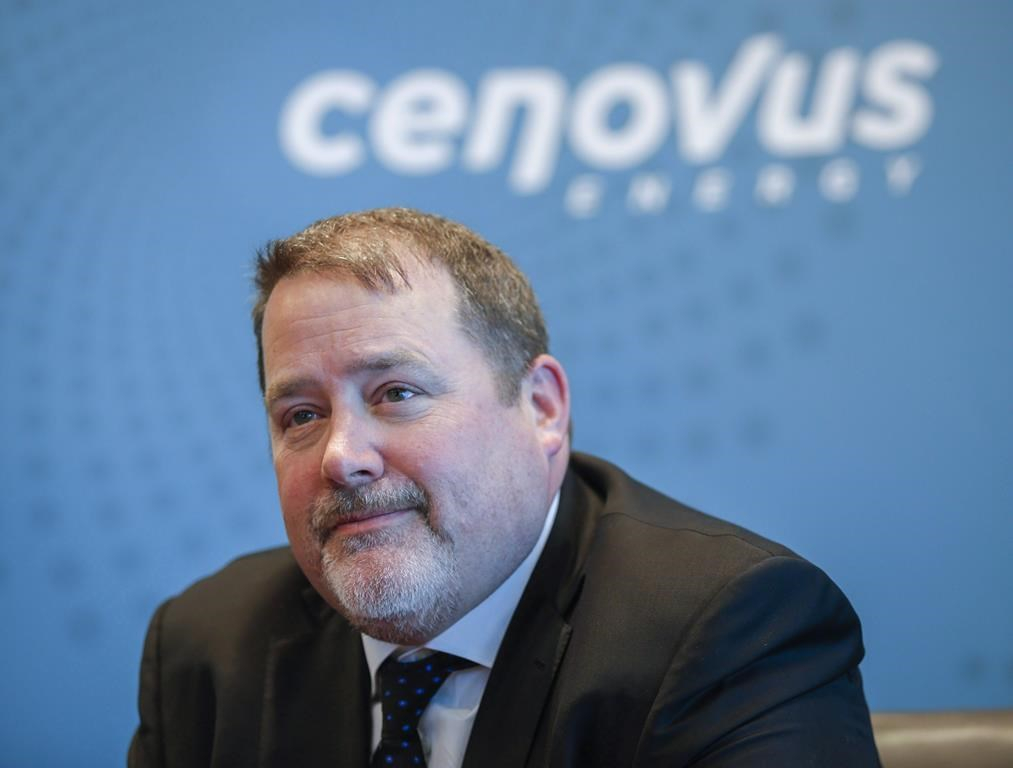 Cenovus president and CEO Alex Pourbaix speaks with reporters at the company's headquarters in Calgary, Alta., on Nov.15, 2017. File photo by The Canadian Press/Jeff McIntosh
Previous story
Next story

Three of Canada's biggest oilsands producers are going directly to voters today to ask them to "influence the outcome" of big decisions concerning the oil and gas sector as a fall federal election looms.

In full-page ads in about 30 English and French daily newspapers across Canada, the CEOs of Canadian Natural Resources Ltd., Cenovus Energy Inc. and MEG Energy Corp. ask readers to call on "leaders of all political stripes" to lend their support to the energy industry.

MEG Energy CEO Derek Evans says the campaign, a rare foray into the public realm for companies that usually prefer to speak through the Canadian Association of Petroleum Producers, is coming out in mid-summer because that's when politicians are meeting voters at barbecues and picnics.

The open letter agrees greenhouse gas emissions must be reduced but it defends the environmental record of the oilsands, contending that emissions intensity per barrel produced has fallen by about 30 per cent over the past two decades.

The letter says Canada's energy companies produce a product that continues to be needed despite the growth of renewable energy, adding that oil and gas producers are the country's single largest investors in clean energy technology.

Evans says the campaign is not partisan and he, for one, won't be unhappy if the Liberals are re-elected, despite their recent adoption — against the advice of the oilpatch — of Bill C-69 to revamp the way energy projects are approved and C-48 to ban oil tanker traffic on B.C.'s North Coast.

"It's not the governments that need to change, it's the message the people of the country send to those governments," he said.

"I'm fine with having Justin Trudeau as prime minister if he embraces a philosophy with respect to energy that says that Canada has a much larger role to play on the global stage and we need to encourage that part of our sector."

The three companies who signed the letter all market at least part of their oil in the form of non-upgraded bitumen.

Notable for their absence are Suncor Energy Inc., Canada's largest oil and gas company by market capitalization, along with Imperial Oil Ltd. and Husky Energy Inc., all of which have refining and retail sales arms as well as oilsands operations.

Those companies are aware the letter exists and support its general goals but have chosen different ways to communicate, said Cenovus CEO Alex Pourbaix in an interview.

He said the letter forms part of a new strategy by the industry to reclaim the public narrative that has been taken over by its opponents.

"As we head into the upcoming election, we are asking you to join us in urging Canada's leaders of all political stripes to help our country thrive by supporting an innovative energy industry," reads the letter.

"One that can contribute to solving the global climate change challenge and play a significant role in creating future energy solutions by developing our resources in the cleanest most responsible way possible today."

The Canadian oil industry centred in Calgary has long complained of federal policies that make it difficult to build pipelines and other projects, arguing those factors have scared away investors that supply the capital needed to keep the industry growing.

The letter is being published a day after the Petroleum Services Association of Canada cut its drilling forecast for a second time this year, to 5,100 wells from 5,300 in its May revision.

Liberals' balancing act between energy and the environment climaxes this week

Even using the industry's under-estimates, Canada's oilpatch is the FOURTH MOST CARBON-INTENSIVE on the planet, behind Algeria, Venezuela, and Cameroon. Canada's rating is nearly twice the global average. (CP, 2018)
AB dilbit ranks near the bottom of the heap, not the top.
The oilsands industry also exports petcoke to Asia, which is even worse for air quality and carbon emissions than coal.

Three CEO’s of major petroleum corporations claim “ A healthy Canadian oil and natural gas industry is vital in leading the way to a lower carbon future.” They may be quite right, but the production of oil and gas is not the main cause of the “ carbon present or future”. It is the consumption of goods and services that causes the consumption of oil and gas that causes the carbon problem. We must export oil and gas to provide foreign funds to pay for imports. We burn Canadian and foreign oil and gas to satisfy our transportation and other goods and services decisions.

There are several ways to reduce consumption of oil and gas. We could ration it like we did during WW2. That war was a lower incentive to reduce consumption than the climate change we face today. And/or, we could increase the cost of oil and gas as an incentive to reduce the use of oil and gas. Just cease charging income tax on wages and replace it with a tax on carbon instead. The money required from taxation would still be paid by taxpayers, but in ways that benefit our climate, and economy. We could impose foreign exchange controls and levy import taxes which would create government revenue and would reduce imports and reduce the necessity to export oil and gas. Also, shrinking the volume of oil and gas production would free up investment and labour for more green energy production.

To prevent such progressive policies, corporations, financial sector and the very rich of our population, will spend more to elect more puppets to Parliament who would continue to ignore the adverse plight of our earth. The alternative is for the 90% of us to vote for representatives that will focus on policies and regulations to benefit our climate here and worldwide.

ABSOLUTELY!!! We ALL need to

ABSOLUTELY!!! We ALL need to participate politically in our survival! Not only must we make informed choices on election day, but we also must PUSH our representatives to keep their election promises!!!
GREEN NEW DEAL anybody?!!

As a low-income pensioner,

As a low-income pensioner, who doesn't drive and has done the best possible to have a low environmental footprint, I wonder how this proposed scheme of things would not affect my already insufficient food budget?

Seems to me that ads from the

Seems to me that ads from the petroleum industry posing as "Energy Producers" is misleading.
The way that the petro industry industry is essential to the green transformation is that it must be phased out. Rapidly. And it's done everything but ... as have the two "primary" parties' policies.
And why *should* they complain about the two legislative "efforts" mentioned? Nothing about them stands in *their* way!