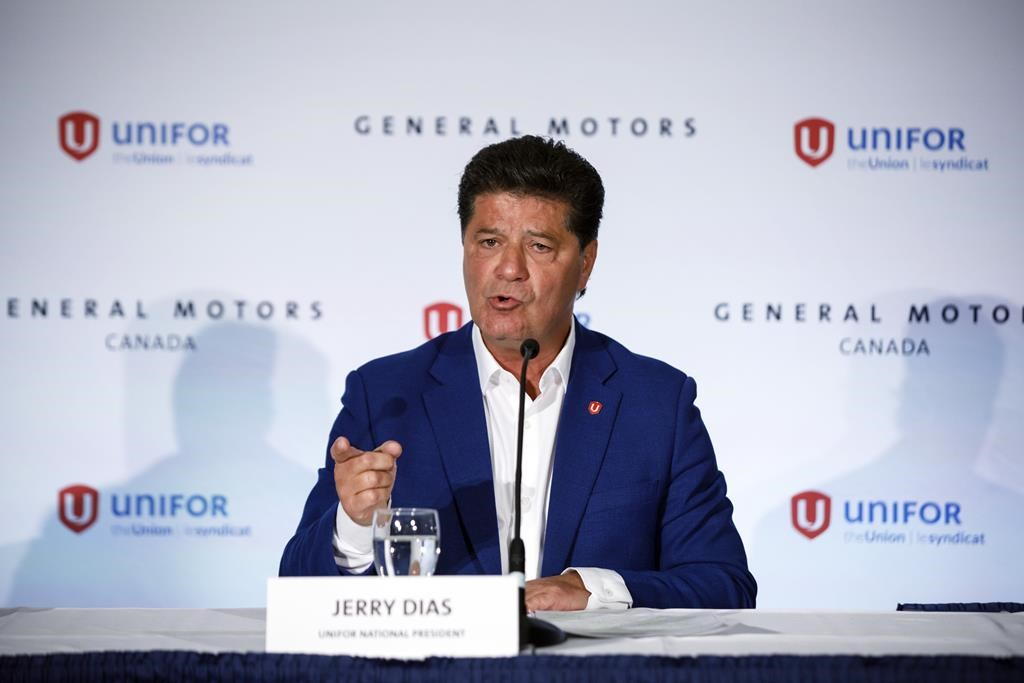 Unifor national president Jerry Dias speaks during a press conference announcing GM's investment in the Oshawa assembly plant, in Toronto, on May 8, 2019. File photo by The Canadian Press/Cole Burston
Previous story
Next story

A union-funded study is painting a bleak picture of a decimated Nova Scotia forestry industry and the rapid disappearance of 2,700 jobs if the Northern Pulp paper mill is closed.

The mill's parent company, Paper Excellence, is facing a January 2020 deadline under provincial legislation to shut down a treatment facility that sends effluent into the Boat Harbour lagoon near a Mi'kmaq community.

However, the company — which directly employs more than 300 people at the Pictou County plant — says it may close if its plan to treat and pipe 85 million litres of effluent daily into the Northumberland Strait isn't approved.

"We have to be environmentally responsible, but we have to understand the impact of losing these incredible jobs in this most important sector of the economy," said Dias, whose union represents about 230 of the workers.

In March, the provincial Liberal government told the company to provide more information before it can provide environmental approvals, including information on the potential impact on fish mortality in the strait.

Dias argued it's time for the province to proceed, saying the water treatment plant will solve the pollution problem — and the alternative is an industry that may never fully recover in the province.

"The solution is to get the shovels in the ground immediately to start to build the water treatment centre. This is the solution right across Canada .... This is technology that works," he said.

The study by Gardner Pinfold Consulting commissioned by Unifor estimates the mill spends $279 million annually, most of it in rural, high unemployment areas of the province, and that a supply chain of 1,379 companies supports its operation.

It estimates that workers employed at the plant and in spinoff activities earn about $128 million a year, with a total of $38.4 million in tax revenues generated.

The consultant says if Northern Pulp closes it will cripple sawmills, forestry contractors and private woodlot owners who are closely tied into the Abercrombie Point pulp mill's operations.

The mill buys large amounts of wood chips and sawdust from the sawmills, using it to produce pulp that is exported and turned into tissue, towel and toilet paper.

Consultant Bob Fraser said his firm's study shows the closure of Northern Pulp would lead to the "shutdown of several sawmills that are highly dependent on the mill." The study says the impacts "would persist for several years and the long-run economic impacts are uncertain."

To date, Premier Stephen McNeil has repeatedly said his government can't change the deadline to end the flow of Northern Pulp effluent into the Boat Harbour lagoon.

The commitment to end the discharge was made to the Pictou Landing First Nation, and the deadline was enshrined in legislation.

However, the union officials argued Wednesday news conference that they believe the province could be flexible on some required studies on fish mortality, which they say cannot be completed by the provincial deadline.

Dias said time is running out, and the simple solution is to allow the company to get to work on the pipeline and the treatment facility to meet the January deadline.

The federal government has already pledged to spend $100 million to help clean up the Boat Harbour effluent lagoons — long considered one of Nova Scotia's most polluted sites.

The sprawling lagoons are contaminated with millions of litres of treated waste water pumped into the area by Northern Pulp over the decades.

Before the mill was built in the late 1960s, Boat Harbour was used for recreation and harvesting food. The local Indigenous community also gathered ceremonial and medicinal plants from the saltwater habitat.

Can pulp mills be re-purposed

Can pulp mills be re-purposed to reclaim waste paper products? Surely, as bans on plactic take hold more and more paper will be used to replace it and so a new, enlarged waste stream (already underutilized) will result. We cannot continue to raze our forests to feed the increased demand. Paper/wood pulp products MUST be recycled.