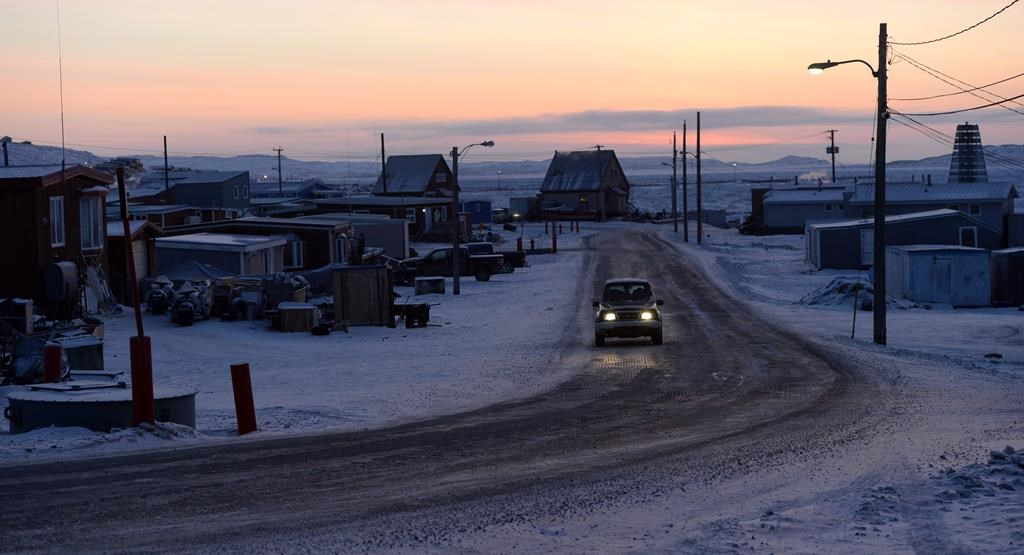 The sun rises as a car drives along a road in Iqaluit, Nunavut on Wednesday, December 10, 2014. File photo by The Canadian Press/Sean Kilpatrick
Previous story
Next story

Two federal announcements this week are expected to kick-start a long-awaited road into the heart of the Canadian Arctic that would lower grocery costs for northern families and unlock billions of dollars in mineral resources.

Transport Minister Marc Garneau pledged more than $50 million to cover preliminary studies and planning for an all-weather road from Yellowknife in the Northwest Territories to a deep-water port on Nunavut's central Arctic coast.

"This will change the economy of Canada," Wally Schumann, the N.W.T.'s minister of industry, tourism and investment, said Thursday.

A direct, all-weather connection to southern Canada's highways — Nunavut's first — would allow everything from fresh vegetables to construction materials to be shipped more cheaply and easily by trucks.

"It's very important for our region," said Stanley Anablak, head of the Kitikmeot Inuit Association, which has been lobbying for the port and northern road for years.

Anablak said many of the supplies his Nunavut communities need, including groceries, are flown in, which results in higher bills. Others are shipped from ports thousands of kilometres away on barges that arrive once a year.

"Once we get the road built, we're hopeful that it will bring the costs down significantly for our communities."

As climate change erodes the usefulness of ice roads, the new link would open what's known as the Slave Geological Province, one of the most mineral-rich parts of the country. A N.W.T. study suggests the area holds $45 billion worth of resources.

A 2016 study found costs for mining projects are up to 170 per cent higher in the N.W.T. than in southern Canada. The N.W.T. and Nunavut Chamber of Mines suggest exploration costs are six times higher.

The road would also help hydro development in the N.W.T., providing cheaper, more environmentally friendly power to both mines and communities.

"Those opportunities are lying there untouched because we don't have the infrastructure," said Schumann.

The money announced this week came in two bundles. Nunavut was awarded $21.7 million for the port and its part of the road and the N.W.T. got $30 million.

"The government of Canada ... will look for ways to improve the flow of supplies to northern communities and support economic opportunities and social development in Canada's three territories," a spokesman for Garneau wrote in an email.

The total cost of the road and port is estimated at about $1 billion.

The final road would run nearly 700 kilometres of gravel through some of the most remote and untouched country left in North America. It would cut through the migration route of the Bathurst caribou herd, which is currently struggling to survive.

Part of the cash will pay for environmental studies, said Anablak.

"We can manage the risk and do it in a way that ensures there's no harm to caribou."

Schumann said Indigenous governments will be involved throughout and may end up owning or operating the road. He said it could take up to four years before bulldozers hit the tundra.

Northerners have been lobbying for the road since the 1960s, he said.

"This goes all the way back to (former prime minister John) Diefenbaker. That's how long this thing's been on the table."

There is not a single

There is not a single community on the route from Yellowknife to the Arctic coast. This road is about support for the mining industry.

Exactly. With the Artic ice

Exactly. With the Artic ice melting so quickly they are readying for commercial boat traffic as well I'm sure.A good move, but I don't have a lot of confidence that the boom, and bust of resource developement will be any different which has left a mess everywhere else. No new thinking here.
No lessons learned I'm sure..

Canada needs more northern roads!! No prime minister since John Diefenbaker has supported northern roads in a serious way. Meanwhile, in the years since Diefenbaker's time, permafrost has receded about 150 km northward across northern Canada. Opportunities await us.
Last month I drove to Tuktoyaktuk and swam in the Arctic ocean. It was a fabulous journey.

By no means do all

By no means do all northerners (certainly not this one!) support this road, this blatant subsidy to China to build a road though vital habitat for caribou herds that are in crisis. Perhaps in the interest of "balance", a follow up story could look at the environmental impact of this proposed project.

As a follow up to my suggestion that the environmental impact of this project be examined, I further suggest that the reporter reads the NWT Draft Recovery strategy for Barren Ground Caribou, paying particular attention to Objective #4 (page 40): "Conserve and protect barren-ground caribou populations and their habitat." The objective notes that the Bathurst herd is particularly vulnerable to the impact of roads and mines...

Definitely a subsidy for

Definitely a subsidy for mining companies, shipping companies and possibly even Arctic oil drilling companies.
Thing being, though, mining takes less and less manpower ... i.e., less and less ROI for governments, mining leaves more and more desecration and toxication behind, and clearly the deepsea port will be the most modern around: very little work there, either, since everything winds up being computer-controlled and done by robotized equipment.
Let's see this one being defended on the basis of "jobs for Canadians" and "revenue for Canada."
I have every sympathy with the need for roads, so that essential goods including decent food can be readily accessed by northern communities. But this is in a very upfront way for the benefit of not people, but industry.
We saw what happened with the LNG line, that the people of the northern communities rejected ... because industry wanted it. That, too, was an ecological non-flyer.