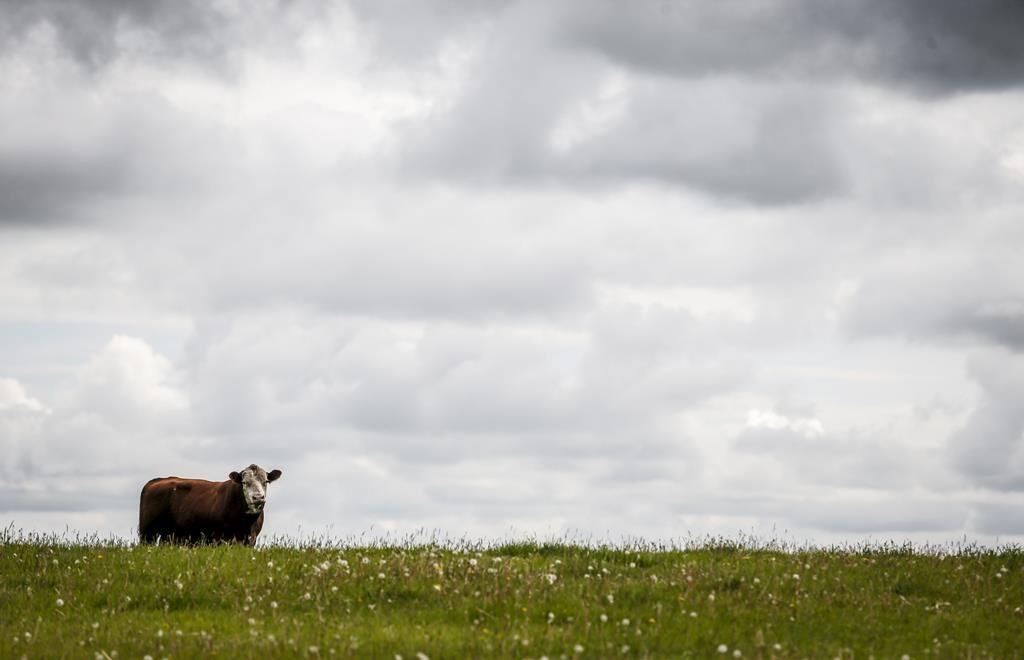 A bull grazes in a pasture on a farm near Cremona, Alta., on Wednesday, June 26, 2019. File photo by The Canadian Press/Jeff McIntosh
Previous story

A Calgary organization that argues climate change is nothing close to a global emergency says Elections Canada is right to keep a close eye on campaign-period communications from the climate-change lobby.

In an open letter, the Friends of Science Society praises the federal agency that oversees Canadian elections for indicating that the science on climate change has not been settled.

"Thank you to Elections Canada for recognizing that climate change has become a political issue," Friends of Science wrote in a letter to Stephane Perrault, Canada's chief electoral offer.

The group bills itself as a non-partisan advocate for civil debate on climate change, which it says is not caused by people or carbon-dioxide emissions but rather simply by the sun. It argues the established consensus on climate change is driven by "foreign green billionaires" with interests in renewable energy trying to take down their main competition: fossil fuels.

Environment groups targeted by Friends of Science say the group's response is exactly why they were concerned about Elections Canada's decision over the summer that climate change could be considered a debatable political topic rather than scientific fact.

Most polls suggest climate change and the environment are bigger issues for Canadian voters than ever before, driven by both scientific findings and people's lived experiences of more frequent floods and forest fires.

Most mainstream political parties in Canada agree there is a scientific consensus that climate change is real, mostly caused by humans' burning fossil fuels, and a growing threat to the safety and security of Canadians and people around the world. Which party has the best policies to address it is expected to be a key question for voters.

But Elections Canada warned some environment groups over the summer that any paid communications on the veracity of climate change could be considered a partisan issue after a formal election call, because People's Party of Canada Leader Maxime Bernier has a platform that denies both that climate change is caused by people and that it is an emergency.

The Canada Elections Act puts restrictions on third-party advertising during campaigns, affecting any ads on any issue any party brings up during the writ period. The rules don't prevent third parties from talking about such issues, but once the cost of ads hits $500 they have to register as third parties trying to influence the election's outcome.

Gray said tax law requires charities to be non-partisan and registering to be able to comment during an election could lead to critics' accusing environment charities of being partisan.

More than 350 Canadian scientists wrote to Elections Canada in August asking it to reconsider the warning, but the organization says it is simply following the Canada Elections Act.

Michelle Stirling, communications manager for Friends of Science, said the organization hasn't made a formal complaint to either Elections Canada or the Canada Revenue Agency about partisan activity by charities yet, but will consider doing so if circumstances warrant.

She pointed to a campaign by the David Suzuki Foundation calling for school children to participate in a global climate strike on Sept. 27. The date falls squarely inside the federal campaign period, which legally has to begin no later than Sept. 15 for the Oct. 21 vote.

"Friends of Science trying to argue that science shouldn't be part of the debate seems more intent to stifle free speech or to hinder the work of charities than to seriously advance the debate in this country," he said.

"I think we're on very solid ground in discussing climate change. Climate change cannot be a partisan issue. It is a scientific fact."

Still, the foundation is stopping all online advertising once the campaign begins, which Cornish said is a big imposition during a time when more Canadians than ever will be craving information on climate change.

"It's a handcuffing of our ability to do our job correctly," he said.

What will elections Canada do

What will elections Canada do when the Flat Earth Society starts running candidates? Climate change is, indeed, political and the Friends of Science*, no doubt, receive much funding from the oil industry to spout their lies.

* did they pay Frank Luntz for the name or did he come up with it for free?

"Friends of Science" - an

"Friends of Science" - an oxymoron if ever I saw one. I remember reading years ago how it was funded from a "secret" account at the University of Calgary. It should be renamed "Friends of the fossil fuel industry" or just "Fossil Fools"!

Trudeau vents frustration that climate change could be a partisan issue