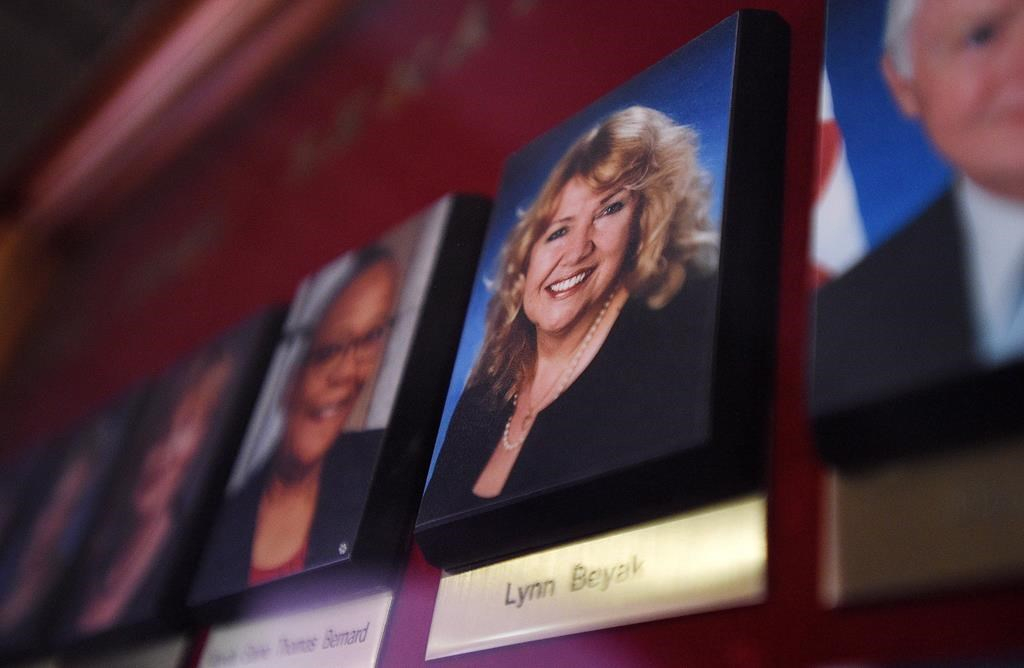 A picture of Senator Lynn Beyak accompanies other Senators official portraits on a display outside the Senate on Parliament Hill in Ottawa on Thursday, Sept. 21, 2017. File photo by The Canadian Press/Sean Kilpatrick
Previous story
Next story

Racist letters about Indigenous Peoples have finally been removed from Sen. Lynn Beyak's website — but only because Senate officials erased them after Beyak refused to do so herself.

She is still thumbing her nose at Senate orders to apologize for posting the letters and to take educational programs on racism directed at Indigenous people.

In early May, senators voted to suspend Beyak without pay for the remainder of the parliamentary session, which ended with the call of the federal election on Sept. 11.

At that time, the Senate also ordered Beyak to remove the letters, apologize and take cultural sensitivity training within 30 days — none of which she did.

Beyak — appointed by former prime minister Stephen Harper, but turfed from the Conservative caucus over her refusal to remove the letters first posted in early 2018 — will be back in the Red Chamber when Parliament resumes after the Oct. 21 election.

But Sen. Peter Harder, who was the Trudeau government's representative in the upper house, expects senators will consider further steps to punish Beyak, including renewing the suspension without pay.

"It is my expectation that the Senate will make it a priority to revisit the matter of Senator Beyak's suspension as soon as possible when Parliament reconvenes," Harder said in an email.

"Senator Beyak has repeatedly promoted a distorted view of residential schools, has shared racist letters on her website and has so far refused to follow through on the Senate's recommendations for remedial measures. It is unbecoming of a Canadian senator to deny Canadian history — and it offends the dignity of the Senate as a whole. Canadian lawmakers should not provide a forum for these types of racial stereotypes — online or elsewhere."

Beyak did not respond to a request for comment.

The controversy arose after Beyak gave a speech in the Senate in January 2018, in which she argued that Indian residential schools did a lot of good for Indigenous children, although many suffered physical and sexual abuse and thousands died from disease and malnutrition. She subsequently posted dozens of letters on her website to show she had support for her views.

In a report released in April, Senate ethics officer Pierre Legault concluded that five of the letters contained racist content, suggesting that Indigenous people are lazy, chronic whiners who are milking the residential-school issue to get government handouts.

He said Beyak's refusal to remove them violated the Senate's conflict of interest code by not upholding the highest standards of dignity required of a senator, by failing to perform her duties with dignity, honour and integrity, and by acting in a way that could reflect negatively on the Senate.

Legault recommended she remove the letters, apologize and take sensitivity training, which Beyak refused to do. The Senate ethics committee and finally the Senate as a whole took up the issue and ordered her to comply, but she has ignored them too.

This report by The Canadian Press was first published Sept. 24, 2019.

Perhaps she will resign. One

Perhaps she will resign. One can only hope.