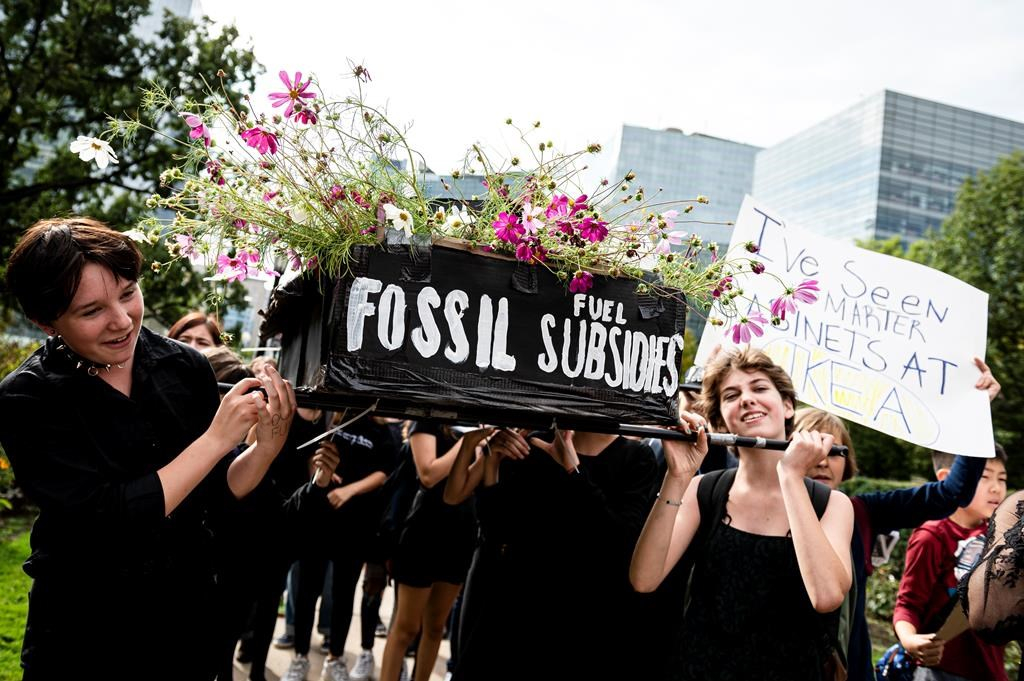 Young people gather at a climate change protest in Toronto on Friday, Sept. 27, 2019. Photo by The Canadian Press/Christopher Katsarov
Previous story
Next story

Oil and gas industry insiders say demands by organizers of Friday's Global Climate Strike to transition swiftly away from fossil fuels to 100 per cent renewable energy are naive and unrealistic.

But the leaders reached on the sidelines of the Global Business Forum in Banff on Friday say they support the right of participants to draw attention to the issue and applaud their emotional commitment.

"The strikes themselves are not offering any answers. The strikes are not addressing the question of how we reduce carbon demand."

He said he doesn't mind students missing school to take part in the protests but he would not support his employees missing scheduled work for that reason.

Activists who want to stop new pipelines aren't considering the negative impact on Indigenous communities who are counting on oil and gas development to improve their lives, said Harrie Vredenburg, an executive board member for Project Reconciliation, an Indigenous consortium considering making a bid to buy the Trans Mountain pipeline from the federal government.

"Another issue (other than climate change) Canada needs to address is its relationship with its Indigenous people that has gone awry over the last 150 years that needs to be corrected," said Vredenburg, who is also a professor at the University of Calgary's Haskayne School of Business, in an interview at the business forum.

"And a way to do that is majority ownership of the Trans Mountain pipeline with the highest possible environmental standards."

"Generally, emotionally, they want to make a change and I think that's a positive thing," he said.

"Now, do I believe they are right and we should strike and stop the world and stop our economy and stop our way of life? No, I don't. But I think their intentions are good."

Gary Mar, CEO of the Petroleum Services Association of Canada and a former Alberta Progressive Conservative environment minister, said some of his three grown children have taken part in environmental protests before and he supports their right to do so.

He said if one of his children wanted to skip school to attend the strike Friday he would "be OK with that."

However, he said it's unrealistic for the climate change strikers to demand the immediate end of oil and gas production.

"We're not opposed to the environment," Mar said of the energy industry.

"In fact, I would argue the environmental characteristics of the energy we develop in Canada are part of the brand of Canadian energy, that we are responsible about it, that we do support governments in their efforts to make this a cleaner environment and, someday, we will transition to different forms of energy. But that's not going to happen in the next five or 10 or 15 years."

Sure, they are naive because

Sure, they are naive because their vision is not clouded by the greed for profit!!
It's NOT TRUE that young people offer no alternatives! They are much more knowledgeable about energy choices than these CEOs are aware!!

How generous of the smug

How generous of the smug/desperate(?) petro lobby to grant its opponents the right to free speech.

Some of the greens may be naive, but many more people understand full well that the petro industry has been manipulative, deceitful, and fraudulant in its business model almost from the beginning. The petro entrepreneurs have been guilty of illegal dispossession of oil bearing properties from their rightful owners, i.e. numerous indigenous tribes, most notably from the Cherokees who were deported, unwittingly to one of America's richest oil fields. The discovery of oil there resulted in decades of deceitful criminally fraudulant transfers of ownership to whites. These tragic miscarriages of justice included murder which was rarely prosecuted. The petro business model has always survived on advantageous government enabling in the forms of tax breaks and outright subsidy. The petro business model also depends on the wanton destruction of useful land through criminally careless operations, spills, off-gassing from sour wells, and the exploitation of workers through abusive ignoring of health and safety regulations, incompetent monitoring of wells, and so many other instances of malfeasance they must fill voluminous complaints and reports.

Some of us also understand that the technologies we hope will replace the burning of fossil fuels for energy carry with them their own forms of toxicity and danger and that we have not yet addressed, in any meaningful way, the remediation/prevention of harms from these new technologies. Some of that failure can be attributed to the dragging effect of oil/gas lobbying and their resistance to investing in the development required to shift away from fossil fuels. There is a prevailing mind set that the earth must yield up the last ounce of black gold that can be wrung from it before the inheriters of that wealth will consider investing in alterntives.

The bad news from that mind set is that neither those who think that way nor their descendents are likely to live long enough to profit from it! Nor will anything else on this planet.

If you listen carefully you

If you listen carefully you will not hear the first nations people say they actually want a pipeline. What they want are jobs, an income and a better living standard. These can be provided by other means, - and should be. The same is true for Albertans.