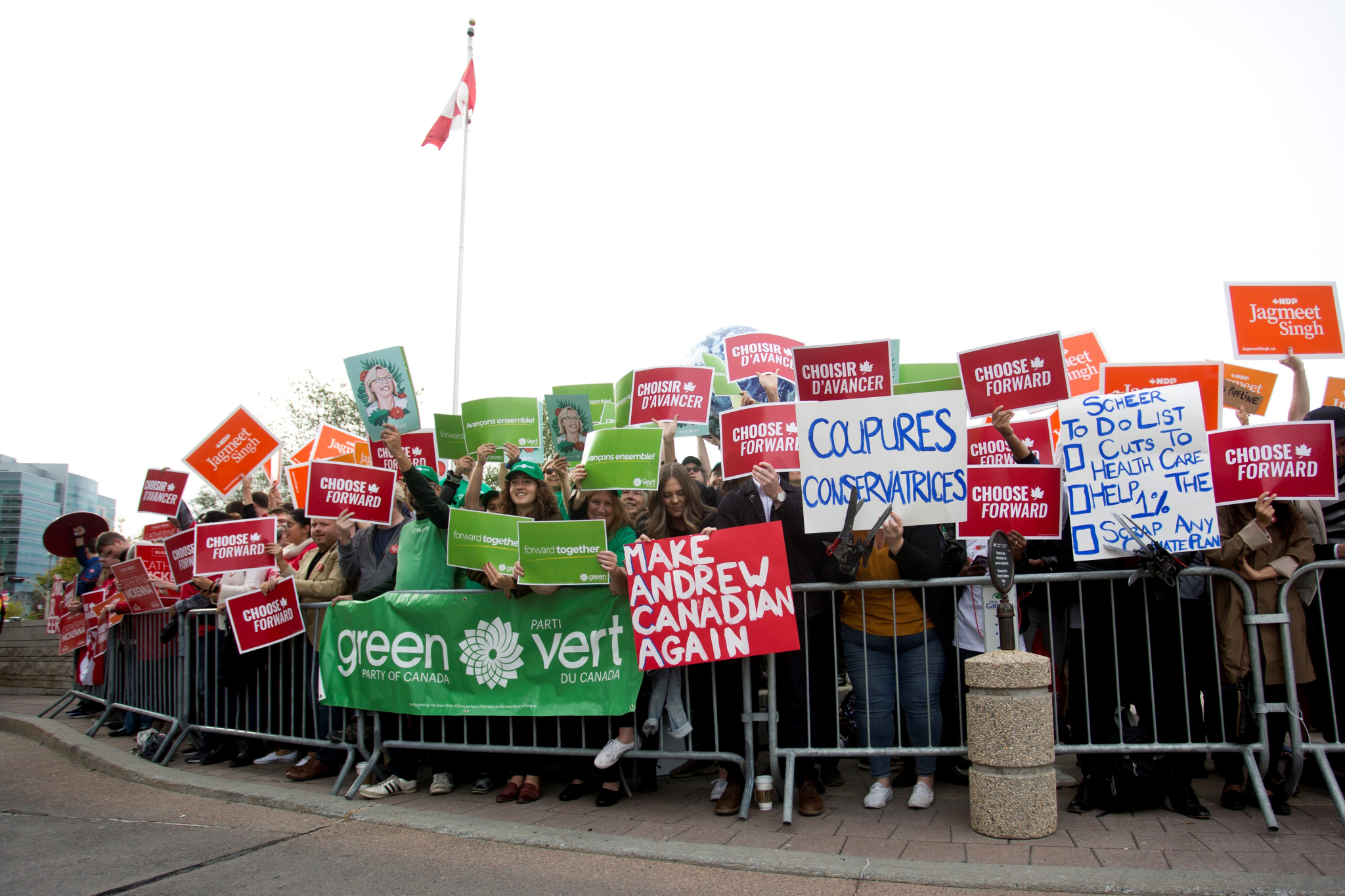 Supporters of the six federal party leaders cheer outside the Canadian Museum of History in Gatineau, Que. on Oct. 7, 2019 awaiting the English-language leaders' debate. Photo by Andrew Meade
Previous story
Next story

On Monday night, the federal party leaders vying for Canada’s votes spent two hours trying to get a word in edgewise.

During the English-language debate in Gatineau, Que., the six leadership candidates — the Conservative Party of Canada’s Andrew Scheer, the Green Party’s Elizabeth May, Justin Trudeau of the governing Liberals, the NDP’s Jagmeet Singh, Bloc Québécois leader Yves-François Blanchet and People's Party of Canada leader Maxime Bernier — sparred over economics, Indigenous issues, immigration, and environment and energy. The leaders often interrupted and talked over one another, prompting more than one of the five moderators to remind them to speak one at a time.

Some of them landed some good lines — see Singh getting whimsical calling Trudeau and Scheer “Mr. Delay and Mr. Deny,” or Trudeau saying that Bernier says publicly what Scheer thinks privately — some of them got their points across and some of them got facts wrong.

Here’s what they claimed, and what the truth is:

Claim: Maxime Bernier said People’s Party is the only “environmentalist” option at the ballot box

In a heated discussion about each of the six parties’ climate plans, rookie party leader Maxime Bernier claimed that, “at the People’s Party, we are the only real environmentalist party.”

In fact, the party takes a hardline stance against the human causes of climate change, arguing in its platform that “it is an undisputed fact that the world’s climate has always changed and will continue to change.” The party backs its claims by saying that “many renowned scientists” are challenging research that shows human-caused CO2 emissions are damaging the planet. The party says it would withdraw from the Paris Agreement, revoke funding from developing nations for emissions-reduction projects, and remove all subsidies for green technology.

On top of that, Bernier infamously attacked 16-year-old climate activist Greta Thunberg on Twitter, calling her “mentally unstable.” He also told the Toronto Star that carbon dioxide — the excess production of which is causing global heating — is just “food for plants.” Bernier also told the Star that “there is no climate crisis.”

Will Andrew Scheer protect abortion rights? Was Jagmeet Singh right to say that Trudeau’s cabinet ministers use offshore tax havens? We answer all your fact check questions from #CanadaDebates2019

Ironically, Bernier contradicted himself during Monday’s debate. Almost five minutes after claiming to be the only real environmentalist party, he told Trudeau that they can both agree that they “disagree on climate change.”

“I don’t believe there is any climate emergency,” Bernier said, thus putting an end to his very short stint as an attemped-environmentalist.

One of Scheer’s campaign promises is to cut foreign aid spending by a quarter, and the Conservative leader has said he’ll do that by withholding funds from countries that are fairly wealthy.

But a CBC analysis published last week found there wasn’t any merit to the claim, nor to the numbers the Conservatives have used to back it up. The party’s cut-off for rich countries is a benchmark not used by any other country or international body, and CBC found it was an “arbitrary” cutoff point that would disqualify countries like Bangladesh, Lebanon and India from getting foreign aid.

Bloc Quebecois leader Yves-Francois Blanchet clashed sharply with all five leaders on the issue of the province’s secularist Bill 21. The bill dictates that those who wear religious symbols cannot work in the public sector as teachers, lawyers and police officers, for example.

The bill was a major topic of discussion for one of the early segments of the debate, about what each leader would do (or not do) to challenge it if they take the office of prime minister.

In a particularly tense exchange with NDP leader Jagmeet Singh, Blanchet adamantly denied Singh’s claim that the bill “says to people that because of the way they look, they can’t do a job.”

Blanchet turned to both Singh and moderator (and Huffington Post reporter) Althia Raj repeating over and over again that “this is wrong,” implying strongly that the bill is not in any way discriminatory.

This is categorically false. Since the bill was implemented in June, a Quebec school board says it refused to hire two teachers who wear religious symbols because they would not take off their hijabs. Several civil society groups in the province have challenged the bill in court, arguing the law is a clear case of systemic discrimination and an infringement of Charter rights.

This one has a question mark because Scheer hasn’t exactly been clear on the abortion issue. Scheer confirmed last week that personally, he is pro-life ⁠— something he’d been questioned about since before the election was called. But Scheer also said he wouldn’t re-open debate on abortion rights in Parliament.

The question gets fuzzier when it comes to private members’ bills on abortion ⁠— Scheer hasn’t explicitly said whether he’d allow Conservative MPs to introduce one.

Claim: Green Party Leader Elizabeth May said her platform got a passing grade from the former Parliamentary Budget Officer

The Greens’ platform didn’t pass muster from the former budget officer, Kevin Page, the first time around. Page and a team at the non-partisan Institute for Fiscal Studies and Democracy at the University of Ottawa originally found that the Green platform was lacking in terms of transparency, didn’t use realistic economic projections and didn’t include responsible fiscal management.

But last week, the Green platform passed overall on its second try. The improved version received better grades in terms of transparency and economic projections, but still received a fail in terms of fiscal responsibility.

Tax havens are offshore countries with low tax rates and little financial transparency. Wealthy people and corporations are able to avoid paying taxes in their home countries by funnelling money into shell companies registered in such countries.

The practice of using offshore accounts isn’t necessarily illegal and isn’t always nefarious. Offshore companies and trusts can be legitimate. But storing money abroad can cause the federal government to lose out on billions of tax income.

The Bahamas has often been described as a "tax haven." But Morneau Shepell maintains that its subsidiary in the Bahamas is a legitimate business, used for pension consulting services and not to avoid taxes, and points to the conclusions of a Canadians for Tax Fairness probe, which found the same.

A second cabinet minister, Treasury Board President Joyce Murray, co-founded another company, Brinkman International Reforestation, which was named in the 2017 Paradise Papers leak of offshore documents.

Editor's note: This story was updated on Oct. 8, 2019 at 12:56 p.m. ET to correct that Morneau resigned from the company before becoming finance minister, not after, and to clarify that Morneau Shepell and Canadians for Tax Fairness considers the subsidiary in the Bahamas to not be used to avoid taxes.

In your introduction (1st

In your introduction (1st paragraph), you forgot to mention the PPC leader Maxime Bernier.