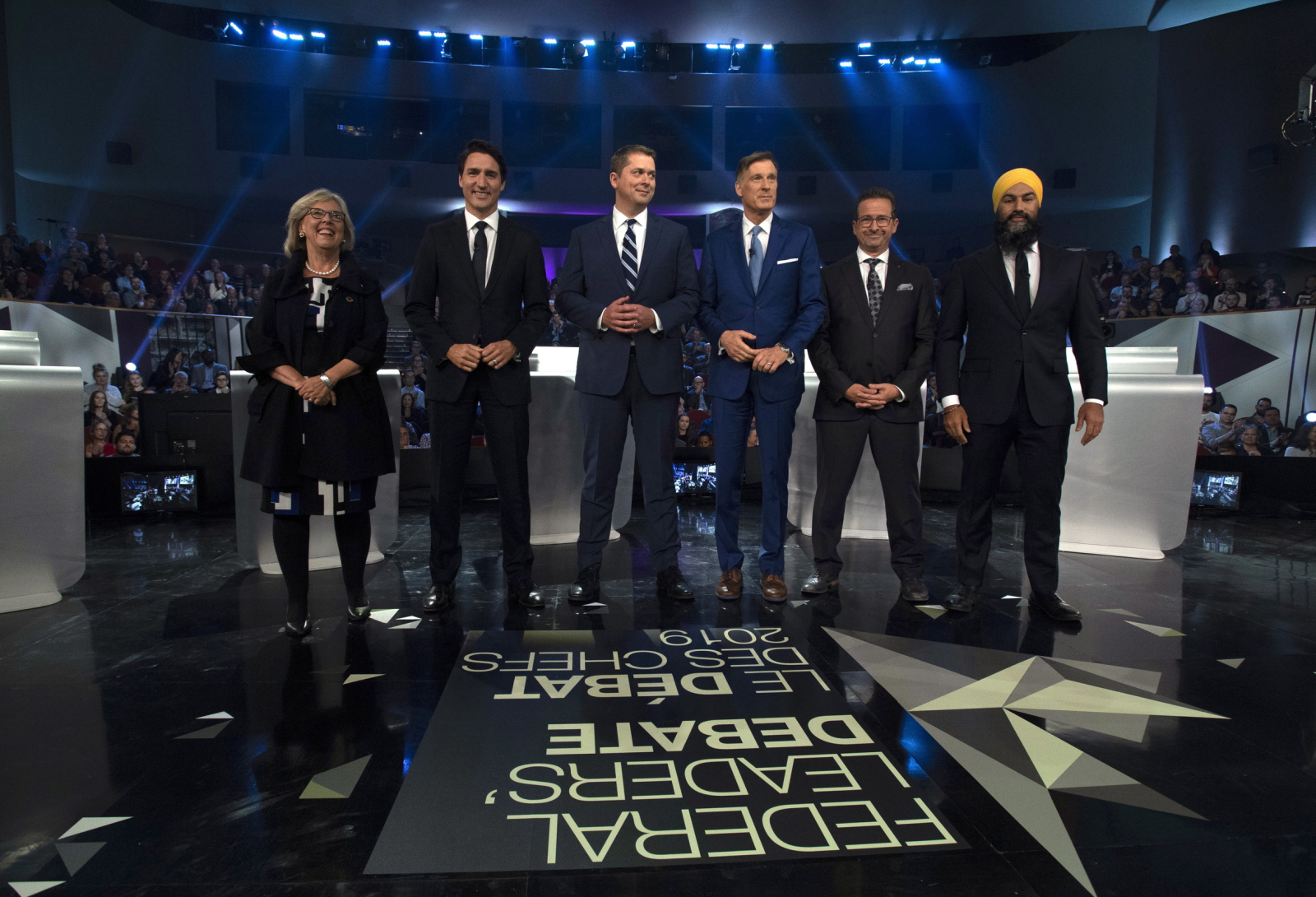 It took eight minutes for leaders gathered for the first and only commissioned English-language debate of the 2019 election campaign to make a reference to Indigenous people.

The reference was made by Green Leader Elizabeth May, who noted that before answering an audience member’s question, she wanted “to start by acknowledging that we’re on the traditional territory of the Algonquin people, and to them, miigwetch.”

Twenty minutes of the Oct. 7 debate were allocated to a discussion about Indigenous issues among all six Canadian federal leaders vying for control of the country’s top office. But as quickly as this segment began, it derailed into a haphazard conversation about pipelines, Quebec and climate change, none of which were discussed constructively, or at all, in the context of Indigenous Peoples.

The segment was moderated by Toronto Star columnist Susan Delacourt, who posed the first question to Conservative Leader Andrew Scheer about his proposed energy corridor: “Practically speaking, how will you consult, accommodate and obtain consent from Indigenous Peoples, and what will you do when your plans come into conflict with Indigenous rights and interests?”

Scheer prefaced his remarks by noting he is “someone who has 12 First Nations reserves in his riding” before speaking of the importance of balancing treaty rights with a path to economic prosperity for Indigenous groups.

He promised a “dynamic” consultation process, but failed to mention the Conservative platform has no dedicated section on Indigenous issues.

Scheer was also one of two leaders onstage (People’s Party of Canada Leader Maxime Bernier was the second) who did not openly state a willingness and commitment to adopt the United Nations Declaration of the Rights of Indigenous Peoples into Canadian law. He demanded, instead, more clarity on the right of “free, prior and informed consent” in relation to energy projects and more.

But all leaders, not just those heading the right-of-centre parties, failed to reckon with Indigenous voters’ concerns.

In June, the National Inquiry into Murdered and Missing Indigenous Women and Girls found Canada to be guilty of both historic and ongoing genocide. Yet on Monday night, no leader mentioned the term “genocide,” despite being asked about how they would each work with provinces to adopt the recommendations of the MMIWG inquiry.

No leader other than Scheer mentioned the calls to action recommended by the Truth and Reconciliation Commission's report, despite also being asked how they would implement them.

The fact is, of the 20 minutes allocated, much was spent on back-and-forth offensive exchanges between the leaders that were completely off-topic or not grounded in the betterment of life for Indigenous Peoples. As NDP Leader Jagmeet Singh said about Liberal Leader Justin Trudeau and Scheer, it became more of a debate about “who is worse.”

Twenty minutes of the Oct 7 debate were allocated for a discussion about Indigenous issues among all six leaders. But as quickly as this segment began, it derailed into a haphazard conversation about pipelines, Quebec and climate change.

Bloc Québécois Leader Yves-François Blanchet steered the conversation away for a while to discuss Quebec’s right as a “nation,” while Bernier, too, derailed the segment to talk about federalism.

Even May co-opted the last few minutes of the Indigenous portion of the debate to talk about the climate crisis, without mentioning its effects on Indigenous communities.

In those 20 minutes, a lot wasn’t said that should have been. We made a list:

Provisions of the UNDRIP other than free, prior and informed consent

The leaders were quick to get into a heated debate about free, prior, and informed consent (FPIC), and how it connects with big infrastructure projects like the Trans Mountain Pipeline. It’s a central mandate within the United Nations Declaration on the Rights of Indigenous Peoples that many people misunderstand, including Scheer, who said in the first leaders’ debate that it means an Indigenous community can “hold hostage” large projects.

While FPIC is an important and complex mandate, it is still only one provision out of a document that includes 46 articles that protect a wide range of rights including self-government, safety from genocide and assimilation, access to education, representation in state-owned media, traditional ownership of territories and restitution for what has been stolen. Federal leaders have failed to talk about how to implement the many other rights listed in the document.

Indigenous housing on- and off-reserve

In 2014, the UN Special Rapporteur on the Rights of Indigenous Peoples visited Canada and said housing conditions for Indigenous Peoples, especially in the North, had reached “a crisis level,” and called overcrowding “endemic.” Statistics Canada found in the 2016 census one in five Indigenous people lived in a home in need of major repairs. Indigenous people in cities face affordability problems in urban centres and wait lists on reserves.

But none of the leaders brought up the subject of housing for Indigenous people.

Natasha Beedie, from Beausoleil First Nation, specifically asked the leaders if they would implement UNDRIP, the calls for action from the TRC and the calls for justice from the MMIWG inquiry. Yet the leaders failed to mention any of those.

The MMIWG inquiry called on the government to build housing, eliminate jurisdictional gaps that result in the denial of services and establish permanent funding for prevention services and cultural services. It also demanded that government educate citizens about racism, sexism, homophobia and transphobia. The actions demanded by the calls are diverse, from increasing public transit to improving policing and increasing the number of Indigenous justices of the peace. Other calls include training for educators, media and that control of child welfare be given to Indigenous governments.

The TRC issued its own 94 calls to action in 2015 that also demand sweeping reform to the justice system, health care and education. Implementing these calls would be no small feat. While Singh, Trudeau and May have voiced their support for UNDRIP, reconciliation and stopping violence against women, implementing these calls would require a clear plan and expansive outreach to Indigenous Peoples to lead these changes.

The "Indigenous segment" of the debate was a mess. @SusanDelacourt is an incredible journalist but was thrown to the wolves. This country is NOT ready to debate Indigenous issues, never mind doing so under a time limit. That said, @theJagmeetSingh was the only voice I heard here.

Indigenous people across the country have been expressing dismay and anger at the Liberal government’s decision to challenge a ruling by the Human Rights Tribunal demanding the government pay maximum compensation to First Nations children harmed by the on-reserve child welfare system since 2006. The Liberal government has applied for a judicial review, arguing they can’t finish a compensation plan by the Dec. 10 deadline due to the election.

Trudeau said a Liberal government would provide compensation, but he didn’t say whether they would provide the maximum amount demanded by the tribunal: $40,000 for each child taken inappropriately from their home.

May did acknowledge the Algonquin Nation in her opening, and Musqueam, Squamish, and Tsleil-Waututh peoples before jumping into her party’s stance on Trans Mountain; otherwise, the leaders gave scant recognition to First Nations, Métis or Inuit peoples. One exception was a moment when Trudeau defended his record by quoting National Chief Perry Bellegarde as saying, “No government has done more for Indigenous Peoples than this government.” Scheer shot back, “I have nothing to learn from Mr. Trudeau, who fired the first Indigenous attorney general for doing her job.”

No leader or moderator acknowledged the elephant in the room: there was no Indigenous journalist on the five-person panel. In fact, Canadaland reported APTN had pushed for the panel to include an Indigenous journalist but were told they could provide a reporter to hold the microphone for audience members asking questions.

Viewers showed frustration on Twitter that, during the frequent skirmishes over pipeline jurisdiction and the climate targets, the leaders did not frame the issues in relation to Indigenous communities.

#CanadaDebates2019 #leadersdebate2019 I would like to officially renew my request to host the debates so that Indigenous issues are allotted the entire time & we can get answers on #genocide re #MMIWG #kidsincare #forcedsterilization #HumanTrafficking https://t.co/Taws95bVyt

Scheer did briefly mention that he knows the importance of treaty rights since there are 12 reserves within his riding.

But none of the leaders went into detail about upholding treaty agreements and providing restitution for treaties that have been broken.

When I tuned into the debate

When I tuned into the debate there was a free-for-all raging across the stage, with loud competing voices blending into an unintelligible word salad. Being partially deaf - I was unable to disentangle any of the argument and so switched off. Decing to wait for the post debate dissections.

As a fairly cynical observer of political discourse in general and what passes for reasoned political soeech in these debased days, I am not surprised by the lack of meaningful discussion on Indigenous issues.

Politicians are keen parsers of voting behaviour, of how to play to specific listeners and it seems highly unlikely that any of those putative "leaders" had been advised that the Indigenous vote was critical to their electoral chances. It really doesn't matter how many "reserves" are in your riding - what matters is whether or not they will vote, and even if they do how much weight their vote will have amongst the swamp of "white" votes.

Voting Canadians can be sometimes roused to indignation at the way Canadian political policy has systematically disenfranchisesd, cheated, aimed at exterminaton, the human beings we have called savages, and non-persons until VERY recently. Why expect anything resembling a serious, constructive discussion at this late date?

The Federal Government still refuses to deal equitably, "person to person" with the survivors or Canada's original settlers. It is as though all white settlers/exploiters of the land, are petrified that somehow those we have tried to erase, will spring back to life and destroy us all. If we ignore them, maybe they'll just fade away?
Fat Chance!