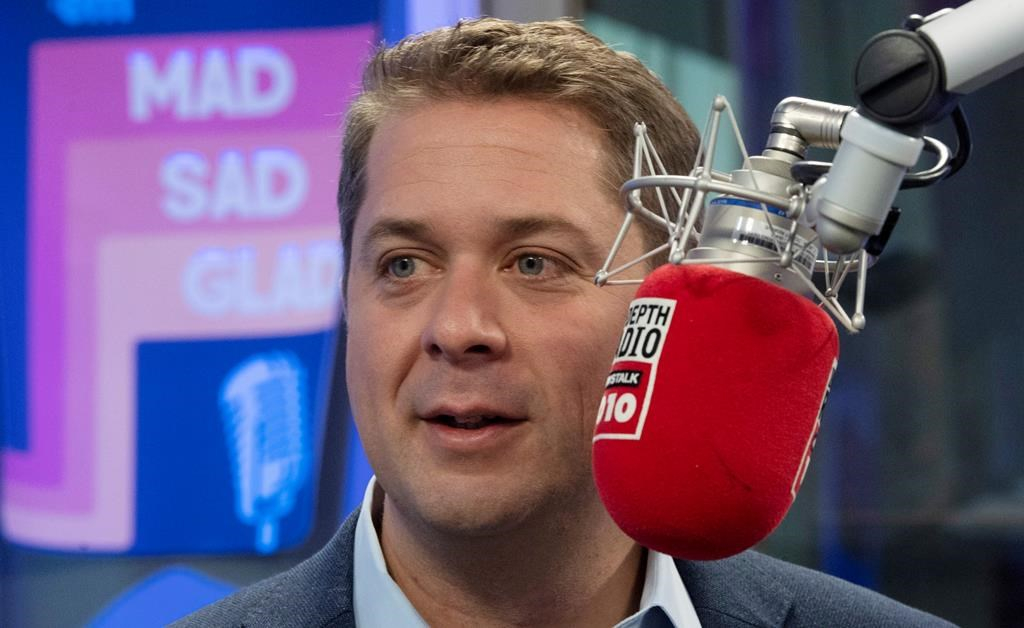 Four days before Canadians go to the polls, the leaders of Canada's three largest federal parties argued Thursday over how the country will be governed if there is no clear winner on election day.

Most polls continue to suggest the Liberals and Conservatives are deadlocked, raising talk about potential minority or coalition governments as support also grows for the NDP in some provinces and for the Bloc Quebecois in Quebec.

Conservative Leader Andrew Scheer said if he wins the most seats in Monday's election, that would give him a mandate to govern.

He repeated that view during a question-and-answer session with reporters in the Toronto suburb of Brampton on Thursday, dismissing reminders that as a former Speaker of the House of Commons, he has familiarity with the rules that govern Parliament and say otherwise.

"We are asking Canadians for a strong Conservative majority mandate," Scheer said before heading to Nova Scotia for a rally in Pictou County. "It is the case that the party that wins the most seats in modern Canadian history has been the party that forms the government."

Paul Martin did step down as prime minister after the Conservatives won more seats in 2006, allowing Stephen Harper to form his first minority government.

But Canada's parliamentary system allows for formal coalition governments and for other kinds of partnerships in the House of Commons, which means that Liberal Leader Justin Trudeau could continue on as prime minister without a majority if he can secure support from enough other MPs to win key votes.

Scheer on Thursday reiterated his past warnings that a Liberal-NDP coalition would prove too expensive for Canadians. NDP Leader Jagmeet Singh let the coalition genie out of the bottle on Sunday, saying he would "absolutely" consider a coalition with the Liberals to prevent Scheer from becoming prime minister.

Trudeau, meanwhile, repeatedly dismissed questions on Thursday about a potential coalition or other arrangement in the House of Commons.

"We are focused on electing a strong Liberal government that is going to be able to continue the hard work of fighting against climate change and investing in families. The choice is very, very clear for Canadians," he said during a campaign stop in Trois-Rivieres, Que.

"We are going to elect a government with Liberal MPs from right across the country. We will continue the hard work of investing in Canadians."

At an evening rally in Montreal with Liberal candidates from across Quebec, Trudeau warned Quebecers that voting for the Bloc Quebecois would help elect a Conservative government that will undo all the progress the Liberals have made, particularly on the fight against climate change. He made an impassioned appeal for them to stay "on the ice, not on the bench."

"When we're facing the largest environmental crisis ever seen in our history, it's not time to withdraw or to choose opposition. Canadians need Quebecers in the heart of the action, not in the opposition seats."

Liberal hopes for a majority are also being challenged outside Quebec by a bounce in support for the NDP.

Singh, campaigning in Ontario with provincial party leader Andrea Horwath, argued Thursday that "coalition" is not a dirty word.

He also criticized Trudeau for breaking his campaign promise that the 2015 election would be the last under the first-past-the-post system, which results in the candidate with the most votes winning in each riding, even though many receive far less than majority support.

Singh said it's wrong that a party can win the majority of the power with the support of fewer than half the voters. He said Canadians often feel their vote doesn't matter, adding 60 per cent of Canadians "regularly" vote against the Conservatives.

"So it's wrong for the Conservatives to think that with less than 40 per of the power — or vote — they deserve all the majority of power. That's wrong," Singh said in Welland, Ont., near Niagara Falls, where former NDP MP Malcolm Allen is trying to take back his old seat.

Singh wrapped up the day with a boisterous rally Brampton, his old stomping ground when he was a provincial politician. The event, billed as an "UpriSingh," was attended by more than 1,000 party faithful, the NDP's largest gathering of the campaign so far.

Green Leader Elizabeth May said it was premature to talk of coalition governments as she also laid into Trudeau for not living up to the 2015 pledge to change the Canadian voting system.

"You don't actually start talking about coalitions until the election is over," she said in Qualicum Beach on Vancouver Island, where she was trying add to her party's two seats — and its chances of being a player in any possible post-election balance of power.

"We're prepared to work with and find ways to make Parliament work for Canadians. And to do that, Mr. Scheer is wrong in saying that he's got a new way in how Parliament works in a minority. Mr. Singh is wrong, saying he will only work with the Liberals."

Bloc Quebecois Leader Yves-Francois Blanchet reiterated his party's position that it isn't interested in propping up any minority government, and instead would be guided by one criterion: what is good for Quebec.

"There is no question of the Bloc systematically supporting a government or a coalition or a party. It will be piece by piece. If it's good for Quebec, we'll be there," he said on Wednesday.

This report by the Canadian Press was first published Oct. 17, 2019.

Haggling? The rules are clear

Haggling? The rules are clear the incumbent gets to set a minority with support first so tsk tsk #ScheerAmerican it’s fait accompli Lib/NDP next four years your lying bigoted unapologetic American hatred for Canada won’t win

Interestingly, according to a

Interestingly, according to a social media polling company looking at the election, the charm of the BQ for Quebecers is not separatism, but pipelines!!! BQ says no new pipelines in Que.
Another very interesting point is that the Conservatives are losing votes to the NDP, not to the Liberals. So perhaps they're understanding more about climate change -- or perhaps it's a voters' protest plus disaffection with the current opposition's leadership.
The interview was on the Friday Oct 18 segment of TVO Agenda, which should also be up on YouTube by now. Look for the segment with Erin Kelly of Advanced Symbolics.