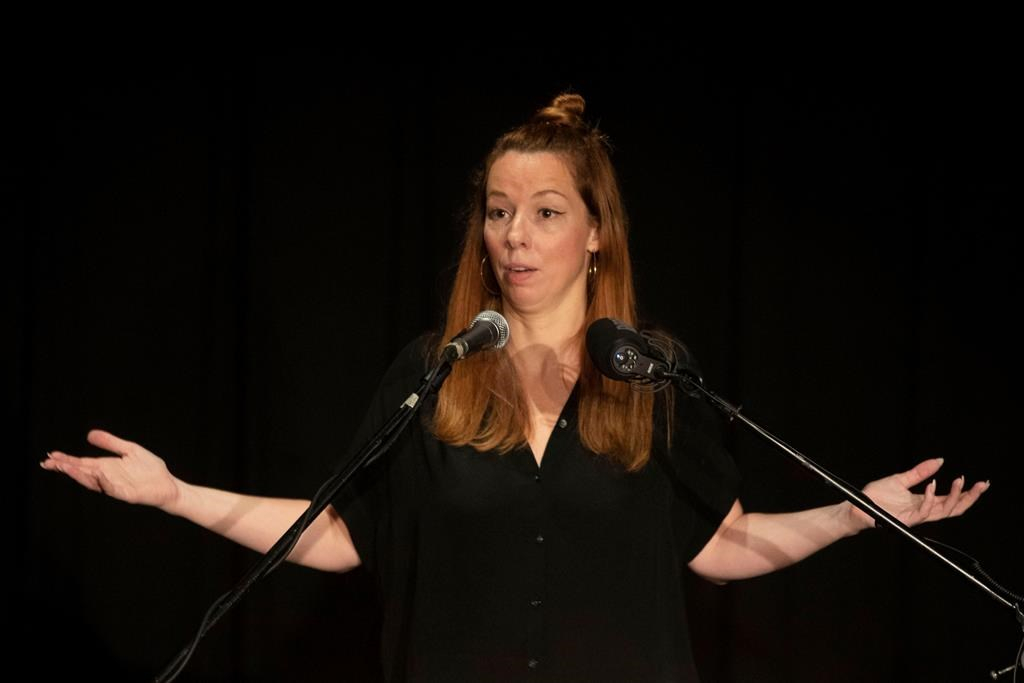 Writer Meghan Murphy speaks at an event in a Toronto Library on Tuesday, October 29, 2019. Photo by The Canadian Press/Chris Young
Previous story
Next story

A number of prominent authors and many in the LGBTQ2 community had called on the Toronto Public Library to cancel the talk by Megan Murphy, titled "Gender Identity: What Does It Mean For Society, The Law and Women?" and hosted by a group called Radical Feminists Unite.

The library, however, allowed the event to continue, citing the right to free speech.

"Trans rights are human rights!" the crowd gathered outside the Palmerston library in downtown Toronto.

Murphy, a freelance writer who runs the website "Feminist Current," has written that "allowing men to identify as women" endangers women and undermines women's rights.

Gwen Benaway, a transgender writer who won the Governor General's Literary Award for poetry earlier in the day, said she was at the protest to continue the fight for trans rights.

"We are part of the community, this is our library and we have a right to be here," said Benaway, who was backed up by an emotional but peaceful crowd.

Inside, about a hundred attendees, mostly women, listened to Murphy talk for 30 minutes.

"It's ridiculous, but here we are," Murphy said of the protest outside.

"I'm told organizers had to go to 20 different spots before coming to the library. I'm glad we're having this conversation despite some local activists and the seemingly confused local mayor."

Mayor John Tory had expressed disappointment at the library's decision to allow the event to take place.

Murphy said she wanted to clarify her position, saying she has been maligned by the media and transgender activists.

"If you're born male, you remain male for life," she said.

She also said that the "trans-activist movement has made for the erasure of women."

Outside, the protest continued until the event was over and audience members were escorted out by police as the crowd jeered.

Many protesters held signs that read "No hate in our city" and "Trans lives matter."

Ashley Thorsell came down with her three children to "take a stand against transphobia."

"I think it's really unfortunate that the Toronto Public Library felt it necessary to give a platform for hate speech," Thorsell said.

An online petition calling on the Toronto library to cancel the event had gathered more than 8,600 signatures by Tuesday evening.

The library has recognized the fact that the event has caused "anger and concern" but maintained it has an obligation to protect free speech.

"Libraries have always been committed to supporting vulnerable communities by welcoming and creating space for different perspectives rather than through censorship," it said in a statement earlier this month.

The library also noted Murphy has never been charged or convicted of hate speech offences.

This report by the Canadian Press was first published Oct. 29, 2019.

Megan Murphy's opinions on gender identity are scientifically unsound and evolutionarily irrelevant. If she and her radical feminists are so fearful of fluid identites they are doomed to live in a world of fear because individuals do not now, nor have they ever, adhered to singular iron bound identity. As long as they are sentient humans (and some humans are wilfully un-sentient!) they should participate in any/all human rights. The fact is that people like Ms. Murphy are simply uncomfortable and fearful of people unlike themselves. If it wasn't the LGBTQ manifestation of human diersity, it would be some other "abhorrant abberration" If human society is so threatened by diversity I wonder why that self same society has overwhelmed all other life forms on the planet (except some of the most minuscule). Humanity in general is overdue for some drastic, undifferentiated pruning. Evolution needs some room for further experimentation and perhaps, finally, evolution can get it right and produce truly rational, responsible people.

I want to know if ANDREW

I want to know if ANDREW SHEER, and his family and his 10% of Conservatives base followers were there ???
Sheer, and his 10% Christian are soooo far right on the Spectrum ~~~ that the ONLY turn left to them is HELL ! Please go directly to HELL ~~~ Jesus Christ loves every human soul !!!

Toronto library event at centre of debate over free speech