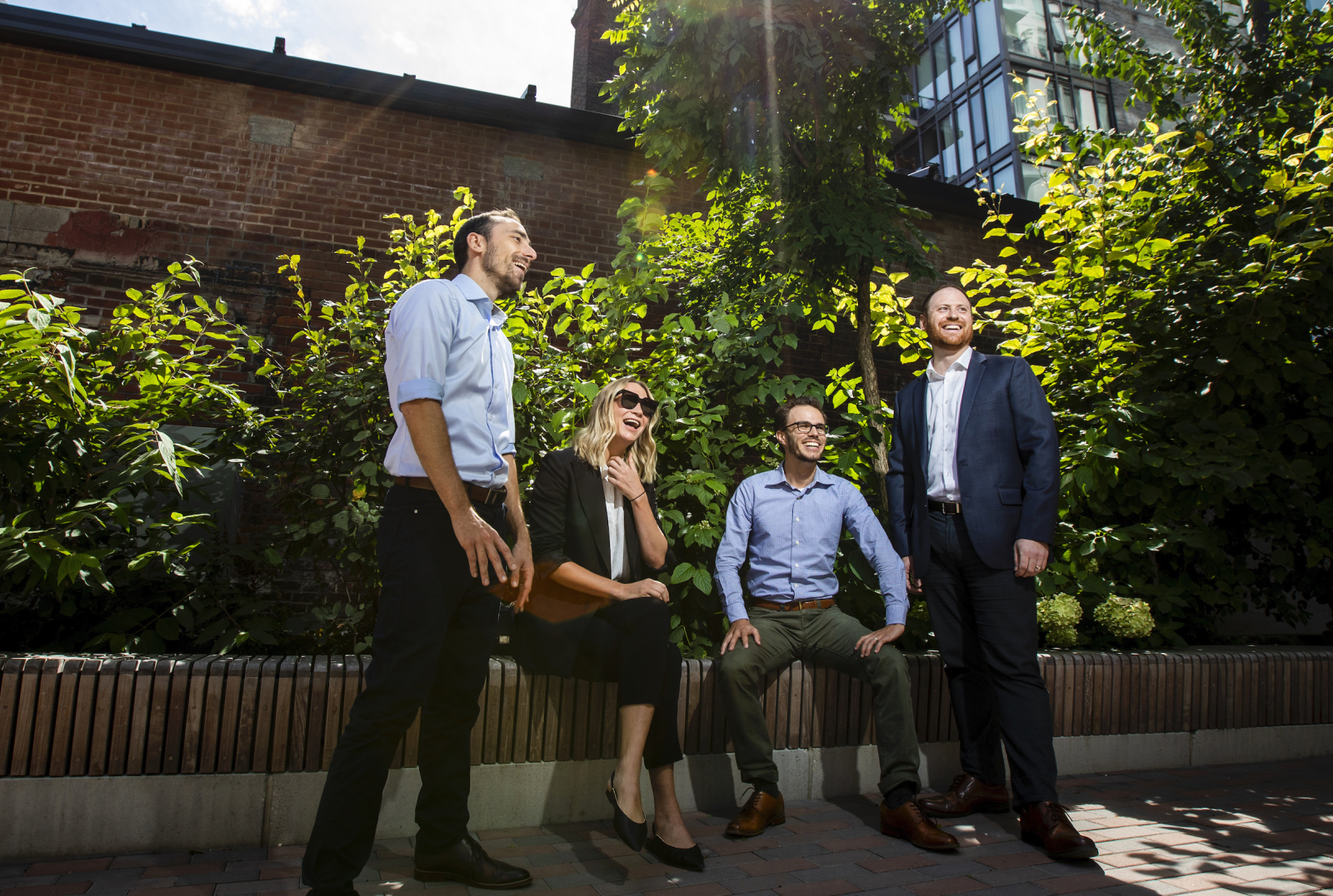 David Berliner has been interested in conserving and protecting the environment since he was a teenager. Now, he has a chance to make a real difference.

His youthful days canoeing through Algonquin Provincial Park in Ontario have given way to a green financing platform he co-founded in his late 20s called CoPower Inc. CoPower lends to green projects with steady, predictable returns and pools that debt into bonds it then offers to investors with as little as $5,000 to spare.

Now Berliner is poised to tap into significant capital - and potentially a half-million new customers - after one of Canada’s biggest credit unions bought his young company this summer in a deal announced on Thursday and expected to close later this month.

“When the opportunity came up to acquire (CoPower), we thought, ‘Wow, we get the instant team, we get the brand recognition, we get the great work they've done on the bond platform.’ It fits within the sphere of the things that we are looking to do in the bank,” she said in a Sept. 26 interview with National Observer before the announcement. “It just seemed like a natural sort of extension of what we were already doing, trying to get money to need.”

The feeling was mutual for Berliner.

“Vancity is similarly focused on using finance to solve big problems,” he said during an interview in an exposed-brick meeting room at the five-year-old company's downtown Toronto office.

The Vancity-CoPower deal comes at a pivotal time, @5thEstate reports, with proven technologies to reduce energy consumption or generate feed power in the market — but with limited financing available to accelerate their deployment.

CoPower, which launched one of Canada's first countrywide green-bond funds for retail investors several years ago, has so far focused on backing solar panels, heat pumps, energy-efficient retrofits to residential and commercial properties, and energy storage.

While green money typically flows into large-scale projects, CoPower’s model focuses on community-scale green projects, which use the funds to offset significant upfront equipment, installation and other costs. The company’s investment is paid off over time as it pockets some or all of the initial cost savings.

“That's increasingly the best bang for our buck,” Berliner said. “Instead of having one big power plant far away, sending electrons to a city, having solar and wind and geothermal and batteries integrated into the fabric of our community is where more investment dollars are going.”

The deal comes at a pivotal time, with proven technologies to help buildings and communities reduce their energy consumption or generate their own feed power in the market — but with limited financing to accelerate their deployment.

Gilfoy said part of the problem is that banks are almost exclusively geared to use money to create more money.

“Our goal is actually to make sure that things are starting to shift and change in the world that make it a better place to live,” she said. “Our goal, clear and simple, is to get money that doesn't normally flow into where it’s needed.”

For CoPower — which has raised and deployed some $30 million across more than 1,100 projects — Vancity’s $27.4 billion in total assets and assets under administration presents a sizable heft the startup could use to greatly expand its addressable market and investment footprint.

“We’ll be able to do a lot more, faster,” Berliner said of what the deal — the terms of which were not disclosed — means for the ten-person CoPower team, which only issued its first significant tranche of bonds in 2017.

The low-carbon bond fund, the tagline for which is "put the planet in your portfolio," recently sold out of its latest tranche of six-year bonds, which offer a five per cent annual return.

“When you look at the returns on those funds, they're decent, right?” Gilfoy said. “It is just that it's not mainstream yet, (but) we're riding the crest of the wave across the country.

“I think the new generation is going to look more actively at putting their money into the things that they care about, and you're seeing that momentum increasing,” she said. “But I think it's beholden on us and all of our other colleagues in the social-impact space to be bolder in telling the story that it's not a trade-off (between profit and principle).”

Berliner said there is a big opportunity in Canada to improve the energy efficiency of buildings, which can lower energy bills and contribute to significant emission reductions.

“We’ve learned to take what we knew how to do from the credit union, which is a lot around commercial real estate lending,” Gilfoy said, “and focus it on heritage buildings, co-working spaces, affordable housing, housing for artists, through affiliations with organizations like Artscape.”

In one of its biggest investments to date, CoPower provided $6.4 million to enable a portfolio of residential geothermal heating and cooling projects to be developed in Kelowna, B.C.

The portfolio of 658 projects is expected to avoid more than 3,273 tonnes of carbon dioxide equivalent annually, akin to each homeowner taking one car off the road.

“The ability to put a geothermal system into a new house instead of hooking it up to a fossil-fuel infrastructure means that over the life cycle of that heating and cooling system, people will save money,” Berliner said.

The process involves inserting pipes in the ground containing an eco-friendly heat-transfer fluid, which absorbs heat and pumps it into the house when atmospheric temperatures are cooler. It works in reverse when the air outside is hotter than the ground is cool.

While it can cut a building’s carbon emissions from heating and cooling to almost zero, a single residential installation can cost between $30,000 to $50,000 — too steep of a cost for many homeowners, which has stunted the spread of the technology.

But with CoPower stepping in to refinance once the systems are turned on, operating company TerraSource and parent company GeoTility can instead use their otherwise locked-in capital to install more geothermal systems.

“The clean-energy future we need requires a lot more distributed energy,” Berliner said, referring to decentralized energy generation and storage located near to where it is used, “and this is the type of financing that we can help bring to that.”

The fund stumped up more than $3.5 million in debt financing to help enable LED retrofits in more than 100 condo buildings (19,000+ units) across Ontario, Alberta and B.C.

Condo corporations are now repaying the loans with fixed monthly payments, which are often less than the monthly energy savings, enabling the condos to immediately recognize a cost benefit to go along with the environmental effect.

Those projects are reducing carbon emissions by more than 748 tonnes a year.

So will CoPower stick with its focus on small projects now that it’s part of Vancity, or seek out the larger projects it was previously unable to handle?

The answer is both, Berliner said.

“We want to continue doing deals that are focused at the building-community level,” he said. “But we’re also trying to catalyze markets, and help grow the geothermal-energy market across Canada, so we can see hundreds of thousands of new homes built with geothermal systems.

Gilfoy said VCIB would be willing to provide between $500,000 and $10 million to finance projects, and could stretch to $20 million in a syndicated deal. That could simply involve going back to the credit union, or connecting with other like-minded funds, she said.

But it may still prove challenging to get big banks and other financiers to buy into the smaller scale of individual projects.

This outfit still needs to

This outfit still needs to work on their model to make it work better for small investors. I considered putting some of my retirement savings into CoPower. When I looked into it, it turned out that I couldn't hold their bonds into my existing self-directed RRSP, but had to set up a entirely new plan with an institution that I'd never heard of, and then have to pay more fees that would eat up a chunk of the return from this investment.

It's a nice idea, and I'd like to try it out, but the execution is not quite there yet.