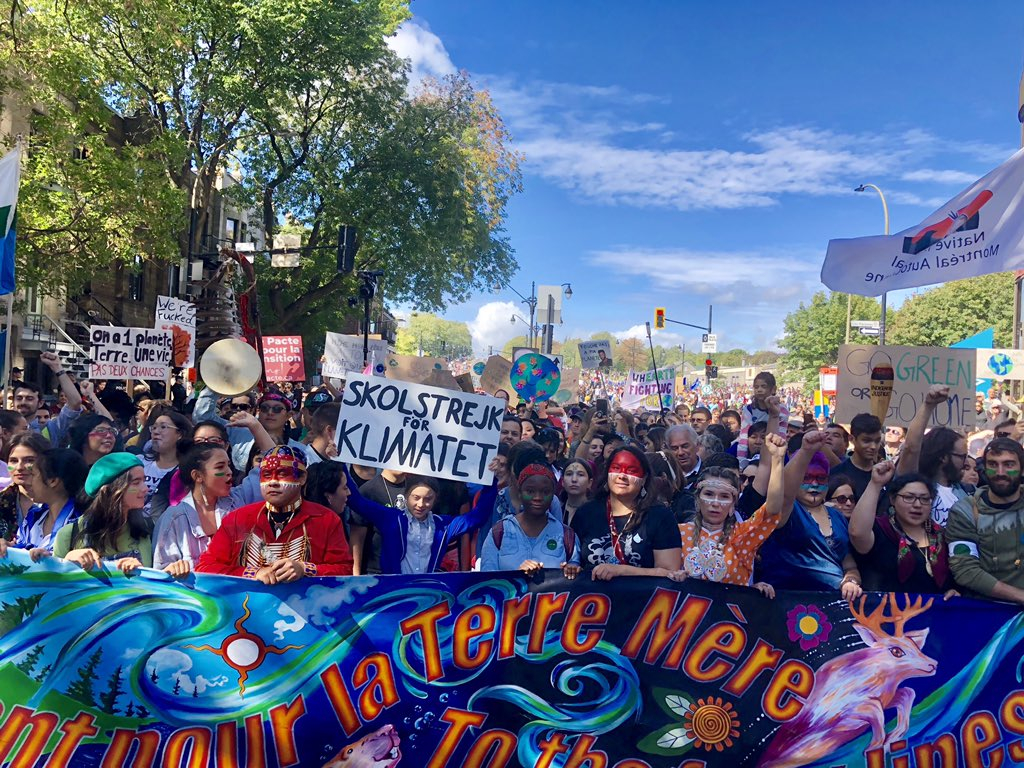 Protesters in downtown Montreal part of a demonstration declaring a climate crisis in June 2019. Photo by Nick Iwanyshyn
Previous story
Next story

A major academic review of the impact climate change has on human health has found that more than half of the nearly 450,000 Canadians evacuated from their homes due to wildfires since 1980 were displaced in the past decade, and says that more than 1,000 Canadians were killed by air pollution related to the transportation industry in 2015.

Researchers also found that Canada's health-care sector is responsible for four per cent of the country's greenhouse gas emissions and that Canada produces the third-highest per capita emissions from health care in the world.

The findings come from the third Lancet Countdown report, an annual review of the scientific evidence of the impact climate change has on human health. Released Wednesday, it was produced by U.K.-based medical journal The Lancet and 35 partner institutions including the World Health Organization, several UN agencies, the World Bank and Yale University.

The Canadian research presented paints a stark picture faced by coming generations, who face the risk of increased wildfires, tick-borne disease and lack of food access in the North.

The average temperature in Canada, according to the report, increased 1.7 C between 1948 and 2016 — twice the global average. Canada's North is warming even faster, with parts of the Mackenzie Delta in the Northwest Territories now 3 C warmer than they were on average in 1948.

"Canada is warming far too quickly," said Ian Culbert, executive director of the Canadian Public Health Association. "The rise in average temperature is putting the health of Canadians at risk. Maintaining the status quo is no longer a viable option."

Data collected by the researchers indicated that the number of wildfire exposures to human populations in Canada increased from an average of 35,300 from 2001 to 2004, to 54,100 from 2015 to 2018. The increased frequency is why more than half of the 448,444 Canadians evacuated due to wildfires between 1980 and 2017 were displaced in the past decade.

Noting that, if greenhouse gas emissions continue to rise in the mid-range of forecasted scenarios, wildfires in Canada could rise 75 per cent by the end of the 21st century, the report calls on the country to develop a "pan-Canadian emergency response approach" based on recent severe wildfire seasons.

According to the research, an estimated 1,063 Canadians died in 2015 as a result of air pollution from land-based transportation.

That is in addition to Canada reporting the highest pediatric asthma rate among high-income-level economies, with nitrogen dioxide from traffic leading to about one in five new cases of asthma in Canadian children.

The report says transport accounted for 24 per cent of greenhouse gas emissions in Canada 2017, but that total fuel consumption for road transport per capita decreased only 5.4 per cent from 2013 to 2016.

Researchers said the 600 per cent increase in the use of electricity and biofuels for transport since 2000 has so far been insufficient, as it accounts for less than four per cent of the energy used.

In order to more rapidly reduce emissions produced by the transport sector — and to reduce related chronic disease and health-care costs — the report recommends Canada adopt provincial and territorial legislation requiring auto manufacturers to gradually increase the percentage of zero-emission vehicles they sell, with a target of 100 per cent by 2040.

"Air pollution from fossil fuel-powered transport is associated with one-quarter of new asthma cases in children in Toronto, as well as over a thousand deaths per year in Canada," said Dr. Chris Buse, co-author of the Canada policy brief. "We have made progress, most notably in British Columbia, but we need light-duty vehicles to be emissions-free by 2040 to truly have a positive impact."

Analysis cited by researchers found that 4.6 per cent of Canada's national emissions come from its health-care sector.

"Though Canadians are proud of the care they provide for one another with this country’s system of universal health care, the Lancet Countdown analysis reveals an area which should give pause to all who endeavor to 'do no harm': Canada’s health-care system has the world’s third-highest emissions per capita," the report reads.

While Canadian health-care sector emissions are increasing, England's Sustainable Development Unit reported an 18.5 per cent decrease in emissions from its National Health Service, public health and social care system from 2007 to 2017 — this despite an increase in clinical activity.

“Fossil fuel consumption is at the heart of health care’s emissions," said Dr. Jean Zigby, a Montreal-based family physician who serves on the board of directors of the Canadian Association of Physicians for the Environment (CAPE). "The sector urgently needs to transition toward clean, renewable energy to meet the goals of the Paris Agreement, and achieve net-zero greenhouse gas emissions by 2050 or before.”

According to CAPE, 71 per cent of the health-care sector's global climate footprint can be attributed to its supply chain, such as production, packaging and transportation of goods.

“The good news is, if we can align health-care development, growth and investment with global climate goals, the 10 per cent of the world economy that health care represents can help drive decarbonization and lead to a climate-smart, more equitable and healthier future,” Zigby said.

The report argues that, while health care is a provincial jurisdiction, there is room for pan-Canadian initiatives to tackle public-health emissions, which should include environmental literacy supports for health-care professionals.

The future for Canadian and world youth at a crossroads

The Lancet Countdown global report focuses, in particular, on burdens infants and children will face in the coming decades.

Researchers note that current infants will bear the greatest burden of malnutrition and rising food prices, as in the past 30 years, the global yield average for maize has fallen four per cent, winter wheat has fallen six per cent, soybean three per cent and rice four per cent.

Children are also threatened by a global rise in infectious diseases, as researchers called 2018 "the second-most climatically suitable year on record for the spread of bacteria that cause much of diarrhoeal disease and wound infection globally."

Researchers determined that, as they age into adolescence, the impact of air pollution will worsen for current infants and children if current trends continue. As they enter adulthood, extreme-weather events will intensify and become more common. For example, 152 out of 196 countries saw an increase in people exposed to wildfires in the past 15 years. They said Canada is not doing enough to mitigate these potential harms.

"Canada is not on track: in 2016, total Canadian GHG emissions were 704 (metric tons of carbon dioxide equivalent), an increase of more than 100 metric tons since 1990," the report reads. "Policies and measures currently under development but not yet implemented are forecast to reduce national emissions to 592 metric tons by 2030, 79 metric tons above Canada’s 2030 target... a goal which is itself too weak to represent a fair contribution by Canada to the emissions reductions necessary to meet the goals of the Paris Climate Change Agreement."

The report cites the shared position of the Intergovernmental Panel on Climate Change and the World Health Organization that global surface-temperature warming on Earth should be kept to 1.5 C in the interest of human health.

I think your photo is

I think your photo is actually of the climate strike in Montreal, not Toronto.

Our record is more than

Our record is more than disappointing.......shameful when you factorin the current posturings of the premier of Alberta..........we need to rapidly transition our grid to renewables, move quickly on the electrification of our transportation, and face the utter necessity of weaning ourselves off bitumen and fracked gas.

Instead the UCP threaten everyone.........including women needing an abortion, and try to bully Trudeau into giving them everything they want for free......extinction technologies die hard..........but die they must.

What's better than the

What's better than the electrification of transportation? Localizing supply chains to reduce total distances travelled. This is where economics' (and hence businesses' and governments') drive for economies of scale breaks down. Global trade was built on cheap and plentiful energy for transportation; its business model breaks down if you account for the environmental costs it entails.

Consequently expect corporations to pressure governments (i.e. taxpayers) to pay for the new infrastructure to generate all the additional electricity but no one will talk about reducing distances travelled (which would mean more local employment and more money circulating in local economies).