Wherever she ends up, Chrystia Freeland will leave her mark on foreign affairs 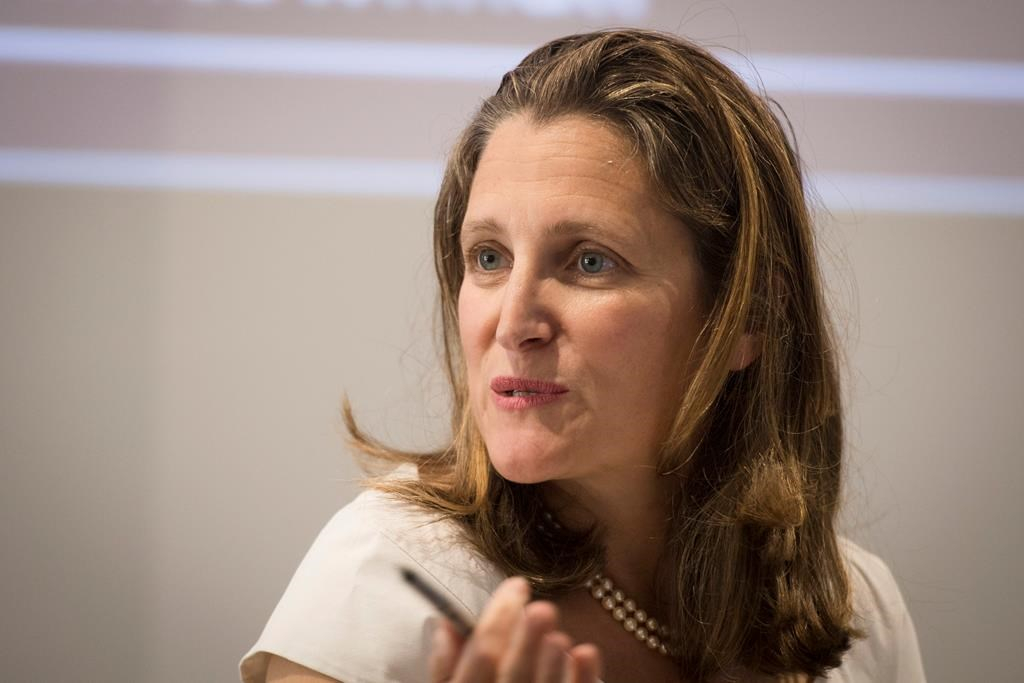 Chrystia Freeland speaks during an election event as part of the Canadian Muslim Townhall series at the University of Toronto on Sunday, September 22, 2019. File photo by The Canadian Press/Tijana Martin
Previous story
Next story

Whether or not Prime Minister Justin Trudeau shuffles her to a new cabinet post on Wednesday, Chrystia Freeland's imprint on Canada's foreign policy will remain visible for some time to come, analysts suggest.

That will be especially true in how Canada pushes forward with its top priority: getting the new North American trade deal ratified and reinforcing the crucial economic bond with its key ally, the United States.

But her decision to position Canada as a leader on a crisis in Canada's greater neighbourhood, the meltdown of Venezuela, may be Freeland's most influential move as the country's top diplomat.

Freeland was appointed foreign-affairs minister in January 2017 with one very important marching order: deal with the newly elected U.S. President Donald Trump and keep the North American Free Trade Agreement, and Canada's economy, from being trashed.

Freeland largely accomplished that, even though NAFTA's replacement has yet to be ratified. But behind the headline-grabbing fight to save a trade deal that was crucial to Canada's economic survival, a debate simmered within Canada's foreign ministry over how to address the very real economic and political implosion that was underway in another nearby country: Venezuela.

According to Ben Rowswell, Canada's then-ambassador to Venezuela, the internal division at Global Affairs Canada boiled down to this: should the problem be left to its Latin American neighbours, or should Canada step up to help?

Three years later, Canada is a key member of the Lima Group, a bloc of about a dozen countries in the Americas, minus the United States, that has made a concerted, if not successful, effort to promote democracy in Venezuela and stanch its epic flow of refugees.

"One of the reasons why Canada is at the centre of regional and international discussions of Venezuela is very much due to the personal initiative of Minister Freeland," said Rowswell, the president of the Canadian International Council.

"There was a real internal debate inside Global Affairs Canada that was resolved when Minister Freeland made this a signature issue of Canadian foreign policy in the Trudeau years."

Which raises the question: how indispensable does that make Freeland?

Though she represents a downtown Toronto riding, Freeland is fond of her Alberta roots — she was born in Peace River — and that connection could be of some use to a governing party with no seats there or in Saskatchewan.

Having faced unpredictable negotiating partners abroad, Freeland might appeal to Trudeau as a domestic intergovernmental-affairs minister, or in some other capacity where contending with fractious premiers would be a big part of the job.

As a journalist, she reported on finance and particularly economic inequality, one of the Liberal government's policy preoccupations.

"If a new minister is appointed, there will be quite a lot of relationships to be built that she's already established through the very significant support she's shown to the people of Venezuela over the last few years," said Rowswell.

"She's a household name in Venezuela because of her leadership of the Lima Group."

As effective as she was, especially in dealing with the Trump administration on NAFTA, no minister in any portfolio is indispensable, said Colin Robertson, a retired diplomat with extensive experience in Washington and across the United States.

"I think she's done a superb job as foreign minister. But I don't think she has to have that job," said Robertson, vice-president of the Canadian Global Affairs Institute.

Freeland's approach to widening Canada's approach to relations with the U.S. beyond the White House and the Capitol will be her greatest policy legacy, and one that any successor will have to carry forward, he said.

With NAFTA under threat, and Trump so unpredictable, Freeland presided over a charm offensive that targeted key Congressional leaders, as well as state governors and business leaders in key states that had strong economic ties with its partner to the north. Canada's then-ambassador David MacNaugton quarterbacked the effort on the ground and it also involved the outreach of about a dozen cabinet ministers.

Transport Minister Marc Garneau and Environment Minister Catherine McKenna were among them, and both have the bona fides to take over where Freeland left off, Robertson argues.

Garneau chaired the cabinet committee on Canada-U.S. relations and was the Liberal foreign-affairs critic in opposition prior to the party's 2015 ascent to power. McKenna has travelled widely as the international face of Canada's climate-change policy — a bruising fight that has made her a lightning rod for online trolls and real-world haters.

Even if she's shuffled, Freeland would still have an influence on foreign policy during confidential cabinet discussions because she has a proven track record, and Trudeau is known to allow such cross-pollination, Robertson said.

"Freeland is always going to speak out. You don't lose anything. She will still be in cabinet. She still has all that experience."

But in an uncertain world, and with a minority government facing an uncertain lifespan, some argue it would be inadvisable to remove Freeland now.

Bessma Momani, a senior fellow the Centre for International Governance Innovation in Waterloo, Ont., said there isn't a deep pool of options from which Trudeau could draw a replacement.

"These are important bilateral personal relationships that are built. In a minority parliament, this might not last very long. You don't want to put someone in there for two years, at most, where they don't really get a chance to grasp the characters and personalities."

This report by The Canadian Press was first published Nov. 17, 2019.

Why is this piece in the NO?

Why is this piece in the NO? It belongs to the G&M or any outlet spewing govt or business propaganda. NAFTA, "crucial to Canada's economic survival"?? According to the Canadian elite, yes. The rest of us? The environment?
If this is a new trend for the NO I will not be renewing my subscription. There are enough neoliberal publications out there - we do not need another one.

My thoughts exactly Julien Lafaille! Moreover I find Trump repugnant beyond words but I actually agreed with his wanting to remove the ISDS clause in NAFTA. I guess Trudeau & his ilk are ok with the fact that Canada is the most sued country in the world! As far as the Lima Group, they are a very controversial entity. Canada should have stayed out of it! Supporting Guaido as President, in what appears to have been a coup, which also aligns with the USA. Aligning with a immoral brute is nothing to be proud of IMHO.

I will not renew either if

I will not renew either if this type of ‘journalism’ is the NO standard now. Neoliberalism is the cause of today’s problems and those who espouse it should not be glorified.

In the last year or so, the

In the last year or so, the National Observer has made increasingly bad choices about what it will publish. (Its approving coverage of greenwasher Steven Guilbeault immediately springs to mind.) This piece about Freeland and the Lima Group is inexcusable hogwash -- and at the very least should be classified as opinion, not news.

I agree with other commenters

I agree with other commenters. I thought NO was slightly progressive news? Celebrating Freeland's/Canada's imperialism which allows people in Venezuela and other parts of the world to suffer so Canadian mining companies can move in to further destroy poor people's lives and the environment is not progressive and I will not support it.

I expect more from this

I expect more from this publication - more progressive views, more engaging articles. This particular article does not belong in an online publication that should be expressing the views of those of us who have given up the Globe and other newspapers run by the right wing presses of North America........

As a brand new subscriber to

As a brand new subscriber to the Observer, I have to voice a similar concern to the other commenters here. Latin American politics are a big, messy topic, one which Canadian media does an absolutely abysmal job of covering. I would have hoped the Observer would be an exception to the trend, doing nuanced coverage of both U.S. interference and Canadian corporate interests in the region. This article glosses over both completely.

Ditto on the concerns

Ditto on the concerns expressed by others. I don’t come to the NO looking for the same neoliberal cheerleading we get from the rest of the Canadian media, and describing the Lima Group’s activities as “an effort to promote democracy” is exactly that.