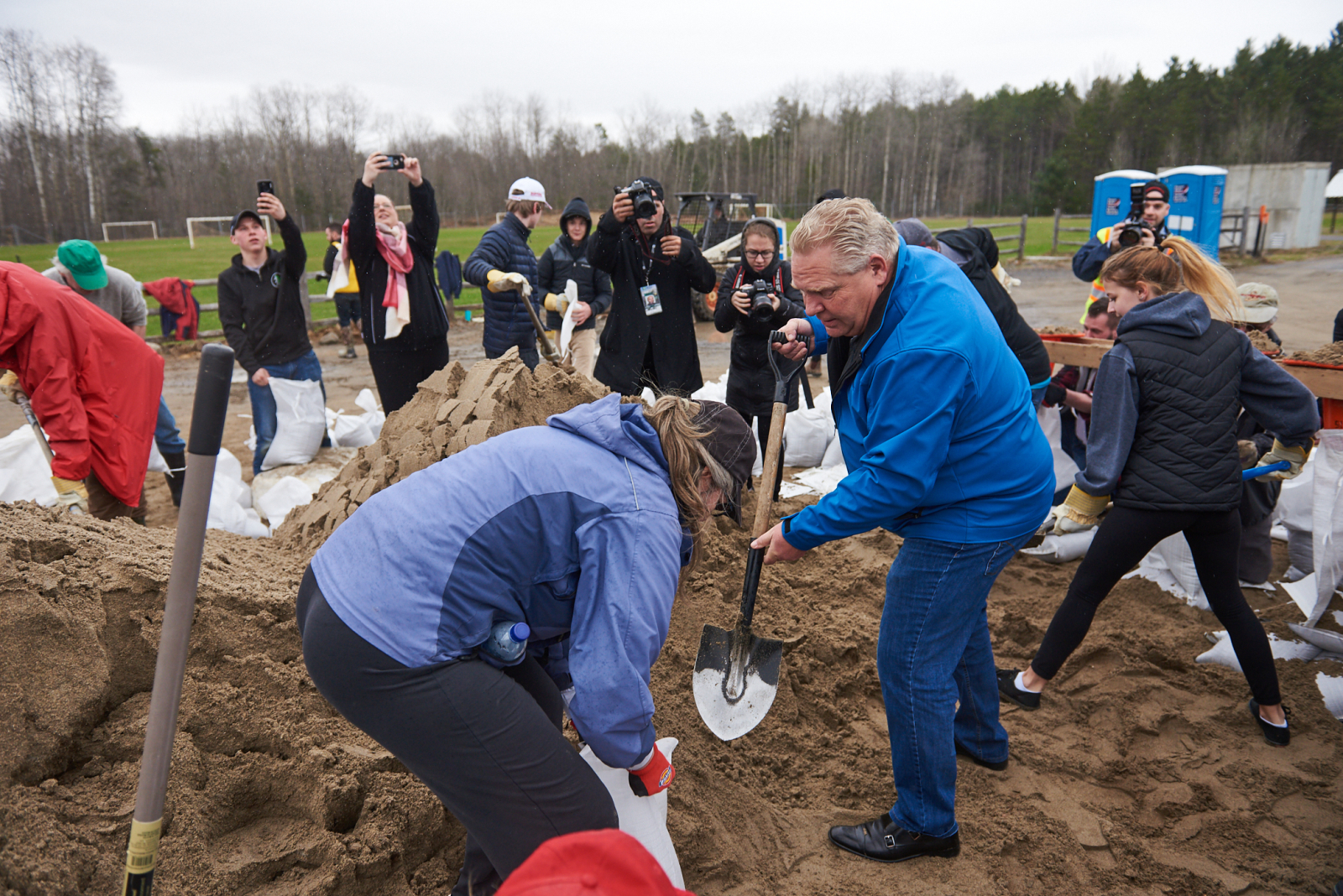 Ontario Premier Doug Ford helps with filling sandbags near Ottawa on April 26, 2019. Contaminated water from flooding is one risk identified by the new Canadian Institute for Climate Choices. Photo by Kamara Morozuk
Previous story
Next story

Canada must prepare both for a low-carbon world and for one in which the international community spurns climate action; otherwise, it will suffer job losses and social disruption, according to a new federally funded institute.

The Canadian Institute for Climate Choices opened its doors Tuesday, and marked the occasion by releasing an 80-page report examining the consequences of climate actions that Canada might take under different global pollution scenarios.

No one knows how quickly the world is going to cut carbon pollution, CEO Kathy Bardswick said in an interview, and Canada must make decisions that account for the uncertainty, rather than be paralyzed by it.

In either a high-carbon or low-carbon future, “there’s a substantial impact on the country,” Bardswick said. “What we’re trying to say is, ‘Yes, we agree there’s uncertainty, and we agree that these scenarios can play out quite differently, and the implications can be quite dramatic. But that doesn’t mean that we wait and see — we’ve got to be able to plan within that context.’”

The institute is operating on funding from the Trudeau government to the tune of $20 million over five years. There is an annual financial accountability process where spending is reviewed to see whether it aligns with stated outcomes.

But the government does not tell it what to research: the directors and expert panels decide the agenda, strategic plan and content and sign off on its priorities.

Don't get caught in 'continual cycle' of recovery

Drawing on extensive economic and scientific research, the report sketches out two broad scenarios, with two possible outcomes in each one.

In the first scenario, a massive economic metamorphosis has occurred. Nations around the world cut their pollution severely over the next 10 years, reaching the Paris Agreement goal. Global demand for fossil fuels has plummeted, and proven reserves are left in the ground. A majority of electricity comes from renewables like solar, wind and bioenergy, while nuclear capacity triples and heavy industry is largely decarbonized.

If Canada chooses to approach this world by sticking with the current economy, which is largely integrated with emissions-intensive exports like oil and gas, and the financial sector that holds over $50 billion worth of loans to the sector, then the global transition, “coupled with inadequate preparation domestically, creates large-scale disruption and job loss in Canada.”

The oilpatch is wallopped, leading to knock-on effects in construction, retail, real estate and the financial sector. Other Canadian sectors like gasoline vehicle manufacturing are caught off guard. The risk of “widespread social disruption” increases as social assistance programs are put under pressure. Governments see shrinking budgets that impact health and education spending.

In the other scenario, carbon pollution continues to be pumped into the air unchecked, and the world fails to achieve the Paris Agreement’s goal, leading to runaway climate change: collapse of ecosystems, accelerating global heating, coastlines that sink underwater, relentless extreme weather and mass societal unrest.

Canada must be prepared for that world, too, the report says, or it will become “caught in a continual cycle of impact and recovery.” People will be injured or killed, or suffer poor air quality and contaminated water, as insurance skyrockets and companies lay off workers. Food and water shortages drive war, conflict and humanitarian disasters, which reach Canada’s shores.

Even if parts of Canada try to capitalize on a high-carbon world (through longer growing seasons for example), the report concludes that “any benefits in a high-emissions scenario are likely temporary and short-lived.”

“Fewer deaths due to extreme cold are offset by more deaths from extreme heat. Savings in heating bills are offset by increased use of air-conditioners in the summer. Longer seasons for growing crops are offset by an increase in heatwaves, droughts, and flooding,” the report says.

When the new institute was first revealed in April 2019, originally named the Pan-Canadian Expert Collaboration, it was dismissed in comments to National Observer by the conservative Ford government in Ontario as a gathering of "elite economists” in ivory towers.

A staffer formerly in Ontario Premier Doug Ford’s office also asserted without evidence that the institute was not independent, but instead staffed with “puppets.” The Ontario government was engaged at the time in a fierce battle over the federal carbon pricing regime being imposed in the province, as a result of Ford’s decision to abandon the prior cap-and-trade system.

Bardswick said the institute is set up to follow a “rigorous peer review process” that will require “not only leveraging the expertise in our staff contingent, but also taking our work and sending it to external peer reviewers, so we have another independent set of eyes looking at the rigour of the research.”

Tuesday’s report was written by senior research associate Jonathan Arnold, vice-president of research Dale Beugin and clean growth director Rachel Samson, with support from six others inside and outside the institute.

The launch of the Canadian Institute for Climate Choices comes seven years after the demise of a previous non-partisan research organization focused on climate, the National Round Table on the Environment and the Economy. That group was created by the former Mulroney government in 1988, but later defunded by the former Harper government in 2012. The foreign affairs minister at the time, John Baird, suggested taxpayers shouldn’t pay for pro-carbon tax reports.

Bardswick said the institute has been forging connections with all levels of government — municipal, provincial, territorial and First Nations — so that it’s not just a federal exercise.

“The real next step is going to be based on this outreach and engagement process that will drive those priorities,” she said.

I agree this is far from a

I agree this is far from a reassuring set of participants.

Why do we subvert every

Why do we subvert every possibility for addressing climate change by having it overseen by a board like this? CAPP? Come on.

Maybe I'm naive but I think

Maybe I'm naive but I think this is encouraging news. Let's give it a chance and see what happens. We are already experiencing the impacts of climate change (fires, floods, and extreme weather events such as what just happened in Newfoundland). On one hand, we need to push for a reduction in Canada's emissions, and on the other hand we need to prepare for future impacts which will stretch our government's and society's resources to the limit.

Board composition defeats the

Board composition defeats the purpose. Federal government is indeed blind and untrustworthy.

I think the idea is to be

I think the idea is to be inclusive and invite everyone's contribution with all kinds of backgrounds. The article only mentioned board members with oil industry or financial background. But that's not the whole board. There are environmental activists like Bruce Lourie on it as well.
Calling the federal government blind and untrustworthy for the creation of this organization is actually counterproductive if you want to tackle consequences of climate change in a meaningful, practical way.

Is it significant that -- 1) that there is no provision for Public Comment to articles published on the Canadian Institute for Climate Choices? 2) that there is no Contact option listed on the website? 3) that missing from the long list of "experts" serving on the Institute are Canadian scholars such as Peter A. Victor of York University, (https://www.researchgate.net/profile/Peter_Victor ); William Rees, Ecological Economics of UBC (https://en.wikipedia.org/wiki/William_E._Rees ); or Rob Mielcarski, M.A.Sc., highly informed citizen and voice for understanding the importance of the thermodynamics of climate change (https://un-denial.com /about/ ) ? 4) that also missing are non-Canadian experts such as the UK's Tim Jackson, author of "Prosperity without Growth" (https://en.wikipedia.org/wiki/Tim_Jackson_(economist) ); Tim Garrett, professor of atmospheric sciences at the University of Utah (https://wp.me/pO0No-506 ) and Dr. Nate Hagens, who teaches a systems synthesis Honors seminar — Reality 101: A Survey of the Human Predicament — to students at the University of Minnesota (https://wp.me/pO0No-50Q ) ?

President Trump declared Tuesday that he's "a very big believer in the environment .." ….and earlier this month told reporters he announced the United States will join the “One Trillion Trees Initiative” launched at the World Economic Forum as world leaders seek to combat climate change. Never ceases to amaze how a politicians mind ‘sharpens’ as election dates get closer.

ITER ,an idea launched in 1985 is building a $35 BILLION DOLLAR prototype fusion plant in France…
Thousands of engineers and scientists, from 35 nations are involved .The US contributed $100 million. This is a big deal.
Mr. Prime Minister ,why is Canada not participating.
The UN sponsored IPCC insists that use of fossil fuels(FF) is the primary cause of the climate change disasters .The IPCC supporters , claim to have measured the impact of carbon dioxide …OK.

Our challenge therefore is to reduce production of carbon dioxide ….and measure the impact, starting NOW!

Or we could have listened to

Or we could have listened to Bjorn Lomborg 10 or 15 years ago which is the party many noon-alarmists would have supported. Instead noon-alarmist practical people were called deniers. That's is on you activists and media.

The Board members are in

The Board members are in keeping with a Liberal tradition of creating organizations that can deliver interesting reports on the problem but end up being hopelessly weak on solutions, paths for government action. The TDBank and Scotiabank are among the global top 10 investors in fossil fuels, yet they are represented on the Board. There is a word for this, it is called greenwashing, a Liberal trademark.
The other Canadian bank on the global top 10 is the RBC.
My upcoming National Observer article deals with this in the broader sense of the growing international fossil fuel divestment movement and Canada being out-of-step in this regard