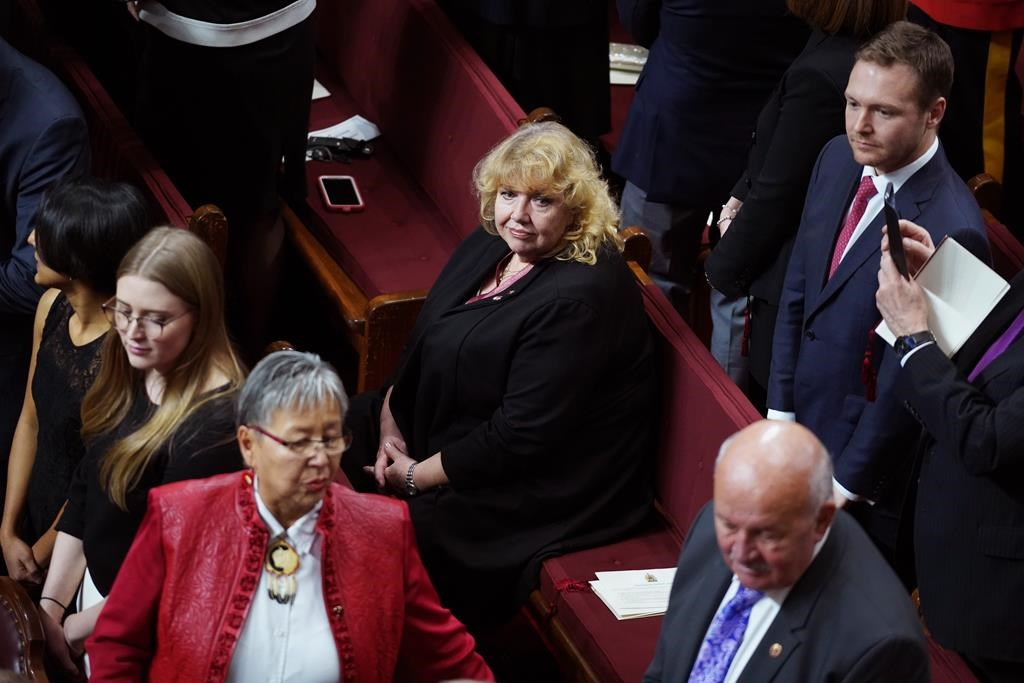 Senator Lynn Beyak waits for the Throne Speech in the Senate chamber in Ottawa, on Thursday, Dec. 5, 2019. File photo by The Canadian Press/Chris Wattie
Previous story
Next story

The Metis National Council says Sen. Lynn Beyak should consider resigning for reportedly claiming to be Metis because her parents adopted an Indigenous child.

David Chartrand, vice-president of the national council, called Beyak's comments, as described in a Senate committee report, insulting, racist and a total misrepresentation of Metis identity.

"That's clearly such an insulting attitude toward our nation," he said in an interview Tuesday.

"To so easily whitewash our identity in such a callous way of mockery is shameful."

He is sending a letter to the upper chamber to demand an immediate apology from the Ontario senator, who had not responded to a request for comment on the specific allegation by Tuesday evening.

The alleged comments from Beyak were described in an appendix to a report from the Senate ethics committee, which last Friday recommended that Beyak be suspended again without pay over racist letters about Indigenous Peoples she had posted to her website.

The appendix detailed concerns from staff at the Ontario Federation of Indigenous Friendship Centres (OFIFC) in Toronto, where Beyak took Indigenous cultural training sessions, as demanded by the Senate.

During a pre-evaluation to gauge the senator's knowledge and understanding of Indigenous issues and culture, Beyak identified herself as Metis because her parents adopted an Indigenous child who became her sister, according to a letter written by training co-ordinator Nicole Meawasige to the Senate's ethics officer Pierre Legault.

"The senator's understanding and presentation of her Metis identity were flagged as a concern by the trainers delivering the (training) and by other participants," Meawasige wrote.

Chartrand said too many Metis people have suffered while fighting to have their distinct Indigenous identity recognized and a statement like this from a Canadian senator inflicts further damage on the people of the Metis Nation.

"I will make it very clear to the Senate that I am demanding an apology from her and she should consider stepping down. This is a serious matter right now for our nation."

The letters in the appendix also allege resistance from Beyak to the training and outline further concerns about comments from the senator, including that she reportedly stated that there is no racism in the northern Ontario community where she lives.

Following a request for comment last week on the committee report, a staffer in Beyak's office, Shirley Molloy, pointed to a letter from Beyak's lawyer, Donald Bayne. It's also in the appendix to the report.

The letter says the OFIFC did not provide the training that Beyak was required by the Senate to complete and that she remains willing to attend a further training program but asks that it not be administered by the OFIFC.

This report by The Canadian Press was first published Feb. 4, 2020.

Racism is hard to extract

Racism is hard to extract from a racist..........in part because they don't see themselves as racist when they voice their 'free speech' assessments of other cultures. They believe they are acting in good faith by saying what they know many people also believe.

Racism is an integral part of a larger belief system. Western values, scientific 'objectivity', and capitalist exploitation can be found there as well. We have to pity the earth, and the people's of the earth.......being cared for as they are, by the folks that invented 'the white man's burden', 'colonialism', 'residential schools of violent assimilation', etc. etc. etc.

Sometimes being white is

Sometimes being white is embarrassing.

When will the Senate finally

When will the Senate finally do the right thing with this woman and her unspeakable behaviour? Our well known national “source of sober second thought” needs to remove her from their group PERMANENTLY! To debate this travesty every session only serves to show Canada how truly superfluous and devoid of any “sober second thought” this group really is!