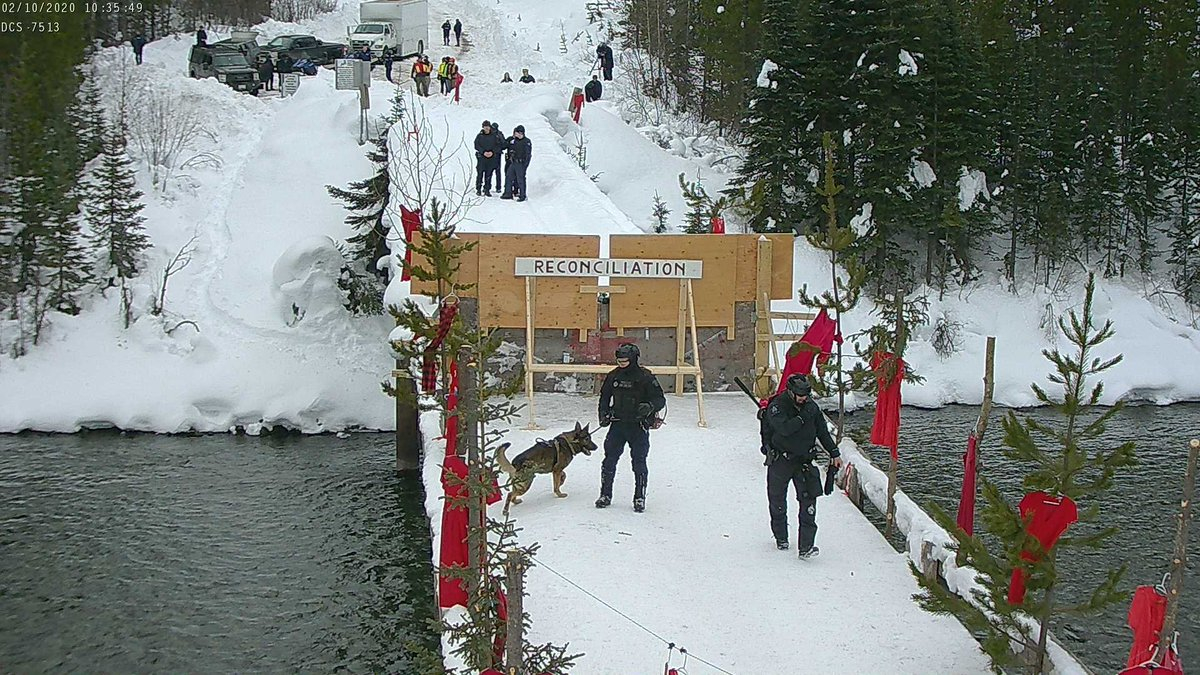 On the fifth day of RCMP raids on Wet’suwet’en Nation territory, police breached the final camp standing in the way of the Coastal GasLink pipeline in northern British Columbia.

A convoy of officers crossed the river with police dogs while tactical teams behind them pointed their guns at the camp, Unist’ot’en.

They walked past red dresses hung to honour missing and murdered Indigenous women and girls. (Later, officers and pipeline workers pulled them down.) They sawed apart a wooden gate with the word “reconciliation” painted on it in bold, black letters. They extinguished a sacred fire.

While the world watched through livestreams on social media, the RCMP arrested seven people. Among them were several of the First Nation’s matriarchs, who had been in the middle of a ceremony, and the director of a $2-million healing centre at Unist’ot’en.

They loaded the matriarchs and their supporters into the back of police vans, handcuffing them with zip ties.

“These arrests don’t intimidate us,” Unist’ot’en Camp said in a statement Monday afternoon.

The RCMP are enforcing a court injunction to force the Wet’suwet’en and their supporters out of the path of Coastal GasLink. The natural gas pipeline would run through the nation’s unceded territory, even though the Wet’suwet’en hereditary chiefs have not consented.

The tiny community has built four camps along the Morice West Forest Service Road, about 1,200 kilometres from Vancouver, as they seek to reoccupy their unceded territory and oppose the pipeline.

On the fifth day of RCMP raids on #Wetsuweten territory in B.C., police breached the final camp blocking #CoastalGasLink. They arrested seven people, including Wet'suwet'en matriarchs.

Since Thursday, the RCMP have advanced along the remote, snowed-in road and stormed through each camp one by one. Unist’ot’en, built in 2010, is the oldest and largest camp. It’s not clear how many Wet’suwet’en and supporters are currently housed there.

At about 9 a.m., officers approached Unist'ot'en Camp. In a press release Monday night, the RCMP said teams spent two hours trying to talk to the people there and asking them to remove the gate leading to the site.

Matriarchs Freda Huson (also known as Chief Howihkat), Brenda Michell (also known as Chief Geltiy) were on the other side of the gate, drumming and singing as they performed a ceremony to "call on our ancestors and to honour missing and murdered Indigenous women and girls," Unist'ot'en Camp said in a statement.

Both were eventually arrested. Huson is the director of the Unist'ot'en Healing Centre, built at the camp as a space for community members to reconnect with traditional practices to recover from grief, loss and trauma related to historic and ongoing colonialism.

The community and its supporters have poured more than $2 million into the construction of the centre. It recently received a $400,000 grant from the First Nations Health Authority to continue to run land-based trauma and addictions treatment programming.

The healing centre's clinical director, Dr. Karla Tait, was also arrested at the camp Monday, along with several other supporters.

No one inside the structures at Unist'ot'en Camp, including the healing centre, were arrested. The rest of the camp appeared to have been left intact.

"No use of force was used, and no injuries resulted from the arrests," the RCMP said in a statement. "They have been transported to Houston RCMP detachment where they can agree to be released on conditions or held for court."

The RCMP also said its "major enforcement operations have concluded" on Wet'suwet'en territory. The road will re-open soon, the statement added, though officers will continue to monitor the area.

The B.C. government's decision to approve Coastal GasLink over the objections of the Wet'suwet'en hereditary chiefs has been condemned by the B.C. Human Rights Commission, the B.C. Civil Liberties Association and the United Nations Committee on the Elimination of Racial Discrimination.

During the raids, the RCMP repeatedly interfered with freedom of the press.

On Thursday, two journalists were detained and dropped off in a parking lot, and told they’d be arrested if they recorded tactical officers with rifles and police arresting a woman by smashing her truck window and pulling her through. On Friday, one reporter was forced to stand in a ditch with no cell service, unable to witness arrests or communicate with his editors. A reporter was temporarily blocked from going into the area Saturday, and on Monday, a video journalist was told they’d be arrested if they walked near a road where arrestees were being held.

Those infringements on press freedom have been condemned by the international Committee to Protect Journalists, Reporters Without Borders, the Canadian Association of Journalists, Canadian Journalists for Free Expression and Amnesty International.

In a statement, RCMP Senior Sommander and Chief Supt. David Attfield said he was "satisfied" with officers' performance during the raids.

"This was a very challenging situation, and I am proud of the professionalism displayed by our members," the statement read.

The clash over Coastal GasLink

The project has been bitterly divisive for the Wet'suwet'en community, raising crucial questions about Indigenous land title. It also exposes a deep clash between Canada’s colonial law and that of the Wet’suwet’en.

The hereditary chiefs’ land claim is backed by a 1997 Supreme Court of Canada decision. But a second trial ordered by the court hasn’t yet happened and many aspects of the dispute are still unresolved.

TC Energy, meanwhile, touts agreements it’s made with elected Wet’suwet’en band councils, which were created under Canada’s colonial Indian Act. The elected councils have jurisdiction over reserve lands but not the area adjacent to the pipeline.

The pipeline company is still awaiting one final greenlight from B.C.’s Environmental Assessment Office before it can begin construction in the area. Last week, the Wet’suwet’en also filed an application to have a judge toss out the province’s approval of the pipeline, saying the company has “flouted” the conditions laid out in the certificate it received from the government.

This is the second time the RCMP have raided Wet’suwet’en territory in the name of Coastal GasLink. Last year, officers enforcing an earlier court injunction violently arrested 14 people at a Wet'suwet'en camp. Documents later revealed by the Guardian showed that officers had been prepared to use lethal force.

In the aftermath of that raid, the hereditary chiefs agreed to allow GasLink in for pre-construction work on the pipeline, saying they were concerned about safety. But the hereditary chiefs evicted the company earlier this year, days after a B.C. Supreme Court judge granted Coastal GasLink the second injunction on Dec. 31.

The RCMP began ramping up their presence on Wet’suwet’en territory on Jan. 13, putting up a blockade at the 27-kilometre mark of the road. While the hereditary chiefs and the province negotiated ⁠— talks broke down last Tuesday night ⁠— officers poured into the surrounding towns, staging to enforce the second injunction.

The first round of raids began hours before dawn Thursday. Officers stormed a media camp and supply post at the 39-kilometre mark of the snowy forest road, arresting four.

They arrested six more during Friday’s raid on the Gidimt’en Checkpoint at the 44-kilometre mark of the road. After a seven-hour standoff, the camp was still standing and several people remained barricaded inside a nearby trapping cabin.

That night, Wet’suwet’en hereditary chiefs and their supporters used their vehicles to block RCMP officers from leaving the area to process four pipeline opponents who were arrested that day. They were at a camp at the 27-kilometre mark of the road, which RCMP had previously said was outside the “exclusion zone” ⁠— or restricted area ⁠— covered by the injunction.

But police extended the exclusion zone late Friday to include the 27-kilometre camp and arrested 11 people there on Saturday. Tensions simmered on Sunday as RCMP approached Unist'ot'en and prepared for Monday's raid.

We are still here, and are joined by Piper the pipeline w/ Artists for Climate & Migrant Justice & Indigenous Sovereignty. We’ve been out since 11am in solidarity with the Wet’suwet’en as their land is being raided by the RCMP for a pipeline. #AllEyesOnWetsuweten #ShutDownCanada pic.twitter.com/QeWAw6nbpQ

Meanwhile, solidarity demonstrations have played out across the country since Thursday, some shutting down key infrastructure.

Tyendinaga Mohawk people near Belleville, Ont. blocked rail lines, cutting off train service between Ottawa, Montreal and Toronto. A stretch of railway in northern B.C. has also been taken over by the Gitxsan, longtime neighbours and allies of the Wet’suwet’en. CN Rail has obtained court injunctions to force protestors in both locations out of the way.

Elsewhere, more than 30 people who occupied the Port of Vancouver in support of the Wet’suwet’en were also arrested Monday.

B.C. Premier John Horgan made his first public comments about the raids Monday, saying he felt confident a "positive reconciliation initiative" is possible in the area but acknowledging that there would be "challenges."

Two months ago, B.C. passed a bill to align its laws with the United Nations Declaration on the Rights of Indigenous Peoples, a landmark international document that, among other things, gives Indigenous people the right to be consulted over resource projects on their territories. Though Coastal GasLink would appear to contradict that bill, Horgan has previously said the law is not retroactive and the pipeline will go ahead.

"Governments do not direct the courts, nor do we direct the RCMP," Horgan said Monday. "I respect everyone's right to lawful protest, but when you're interfering with the operation of the economy... that becomes a challenge."

Editor's Note: This story was updated at 11:48 p.m. Eastern time to include statements from the RCMP, Unist'ot'en Camp and Premier John Horgan.

so now we have conclusive

so now we have conclusive proof ( if Site C wasnt enough for you) that Horgan is just another corporate frontman in his own words ,separating the "economy" (corporate impunity and max profit as the goal). v protest of the above ( have your little pout and then F*** off while we continue BUSINESS AS NEO LIBERAL USUAL. )
But Extinction Rebellion and climate strikers have woken us up to the fact that thinking that way
= DEATH and are occupying the offices of corps and pols to say so. Our political sleep is over!!!
We resist and insist or we all die.

Well our provincial leader has displayed his true colours. He is not the man I voted for. I am profoundly disappointed in his attitude and his bafflegab and waffling on this important issue. It is clear that 'business before principals' is his guiding philosophy. I simply cannot understand how he can reconcile his position on the TMX pipeline with his position on the Coastal Gaslink pipeline.
And where is our national leader on this? Where are the silken words and the sincere promises of reconciliation now?

Clearly those responsible for

Clearly those responsible for shirking decency, indigenous rights and title to land, and responsible leadership, are the ones who are openly creating the rail and port shutdowns. Any government employee, 'elected official' or citizen who says otherwise is still caught up in colonial haze. The request by the Wet'suwet'en hereditary chiefs is simple, not complicated. There is no reason why land title and self-government needs more than 15 minutes to make an honest commitment to. Then onto renewable energy adoption and investment ..........