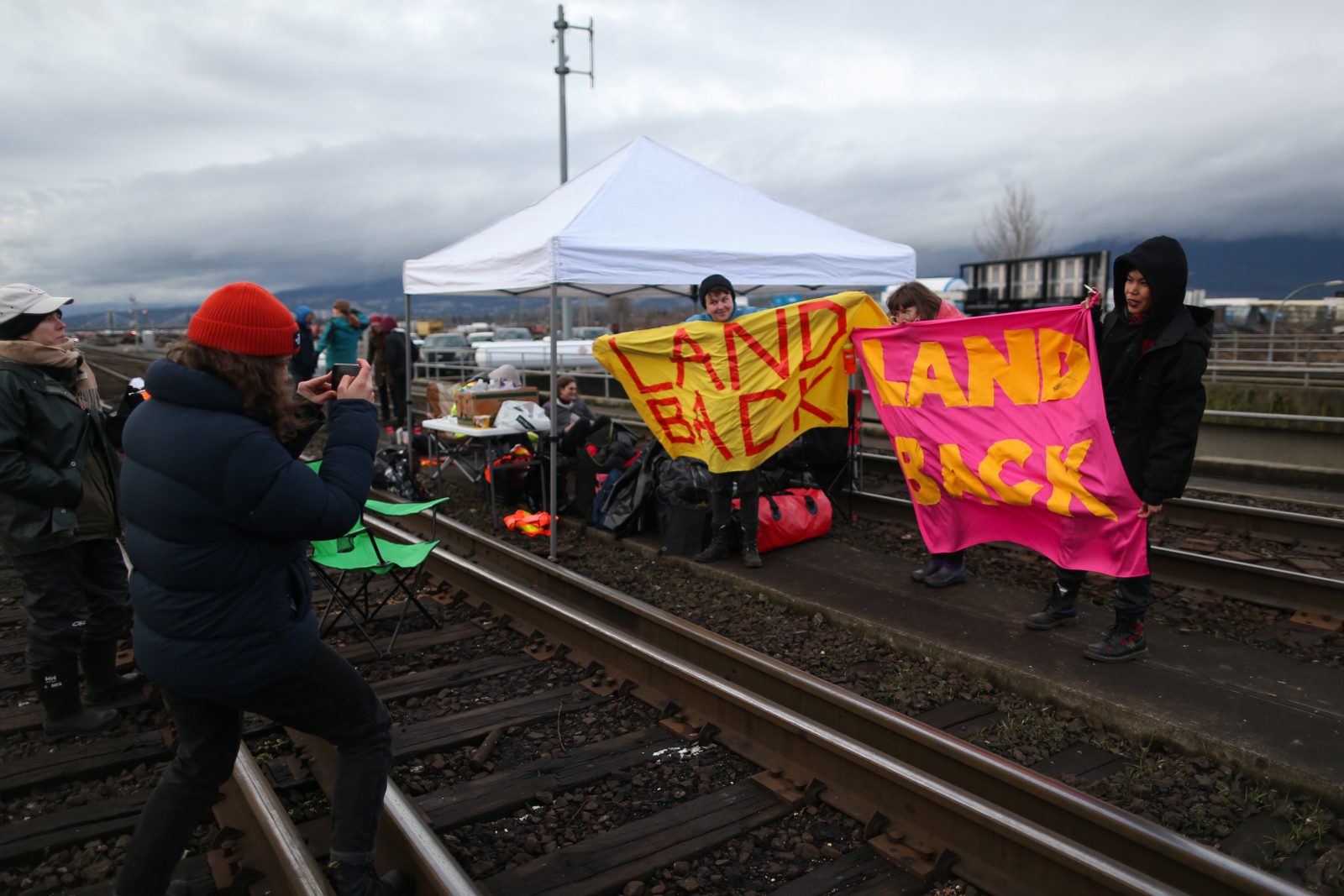 As B.C. and federal leaders scramble to contain growing anti-pipeline protests across the country, a new rail blockade has sprung up on the outskirts of Vancouver.

Hours after CN Rail announced it was shutting down much of its eastern rail networks because of blockades in solidarity with the Wet’suwet’en hereditary chiefs, about a dozen supporters in Port Coquitlam blocked part of a rail line.

The move comes just as Gitxsan hereditary chiefs appeared ready to remove a similar blockade on a CN rail line near New Hazleton, B.C., that was set up in reaction to RCMP raids on land defence camps run by their neighbours in Wet’suwet’en traditional territory.

Earlier Thursday, B.C. Premier John Horgan sent a letter to Gitxsan chiefs agreeing to have Indigenous Relations and Reconciliation Minister Scott Fraser meet with them in exchange for the New Hazleton blockade coming down.

But that hasn’t changed the resolve of the Port Coquitlam land defenders to keep their newly established blockade in place until police leave Wet’suwet’en territory.

“We’re following their leadership, not Horgan’s orders,” she said.

At the Port Coquitlam rail blockade, a member of the Canadian Pacific Railway’s private police force threatened to arrest a reporter on assignment for National Observer.

The officer appeared to suggest repeatedly that protesters were allowed to remain at the site, but that journalists would be at risk of arrest if they stayed on what he described as private property.

Police have faced waves of criticism over interfering with the press’s freedom to report throughout this crisis. A week ago, officers with the RCMP repeatedly threatened journalists with arrest, and temporarily detained them during the raids on Wet’suwet’en land defender camps outside Houston, B.C.

Thursday was a day of solidarity actions across the Vancouver region, with dozens of supporters occupying B.C. Attorney General David Eby’s constituency office in the city for hours.

As blockades and protests have sprung up across the country, they’ve had significant impacts on the movement of goods, especially the rail blockades.

“We’re not here to make a spectacle, or win hearts and minds. These actions have an important impact on bringing more people into the movement.”

“But the real reason we are here is to protect the land. We are doing that by disrupting the flow of capital through these territories as a way to force Canada and the RCMP out of Wet’suwet’en territory.”

The nationwide actions began a week ago, after the RCMP, backed up by officers with assault rifles, dog teams and drones, raided the first of three Wet’suwet’en blockades along the Morice West Forest Service Road bear Houston, B.C.

It was the latest escalation in a decade-long conflict, with the Wet’suwet’en hereditary chiefs attempting to halt a $6-billion natural gas pipeline through their traditional territory.

Coastal GasLink, the company behind the project, has agreements with 20 First Nations band councils along the pipeline route, including those within the Wet’suwet’en Nation, but the hereditary chiefs say those band councils have no jurisdiction to make agreements covering the traditional territories outside the reserve boundaries, where the pipeline will actually go.

That land is theirs to govern, the hereditary chiefs say, and they have not given their consent.

Sitting on the railroad tracks in Port Coquitlam, land defenders sung Solidarity Forever, played hacky sack and waited to see what the police’s next move would be.

“We’re prepared to stay for the long haul, either until the RCMP is out of Wet’suwet’en territory, or until we are forced to leave,” Krupp said.

In fifth paragraph from the

In fifth paragraph from the end of this report, “nautical” gas pipeline should be “natural gas pipeline”

Hi Walter, thanks for the

Hi Walter, thanks for the heads up on the typo. It's now been corrected.

Automatic spelling correction can turn out to be your worst enema!

Private company police threatening to arrest journalists and repeatedly urging them to leave gives a chilling impression....where in the world do the military arms of corporate power operate freely and ban the free press from witnessing what goes down?

Much praise for the National Observer journalist who refused to leave. Where could we lodge a complaint against those company enforcers?

Place names. Please correct the spelling of New Hazelton (not Hazleton). That's the place in central (not northern) B.C. where Gitxsan chiefs are supporting their Wet'suwet'en counterparts. It's about 150 km from the place where CGL wants to push their pipeline through.

"It's about 150 km from the place where CGL wants to push their pipeline through."

Which, coincidentally, is about as far as some of the reserves run by elected band councils that approved the pipeline!

This is a human rights issue.