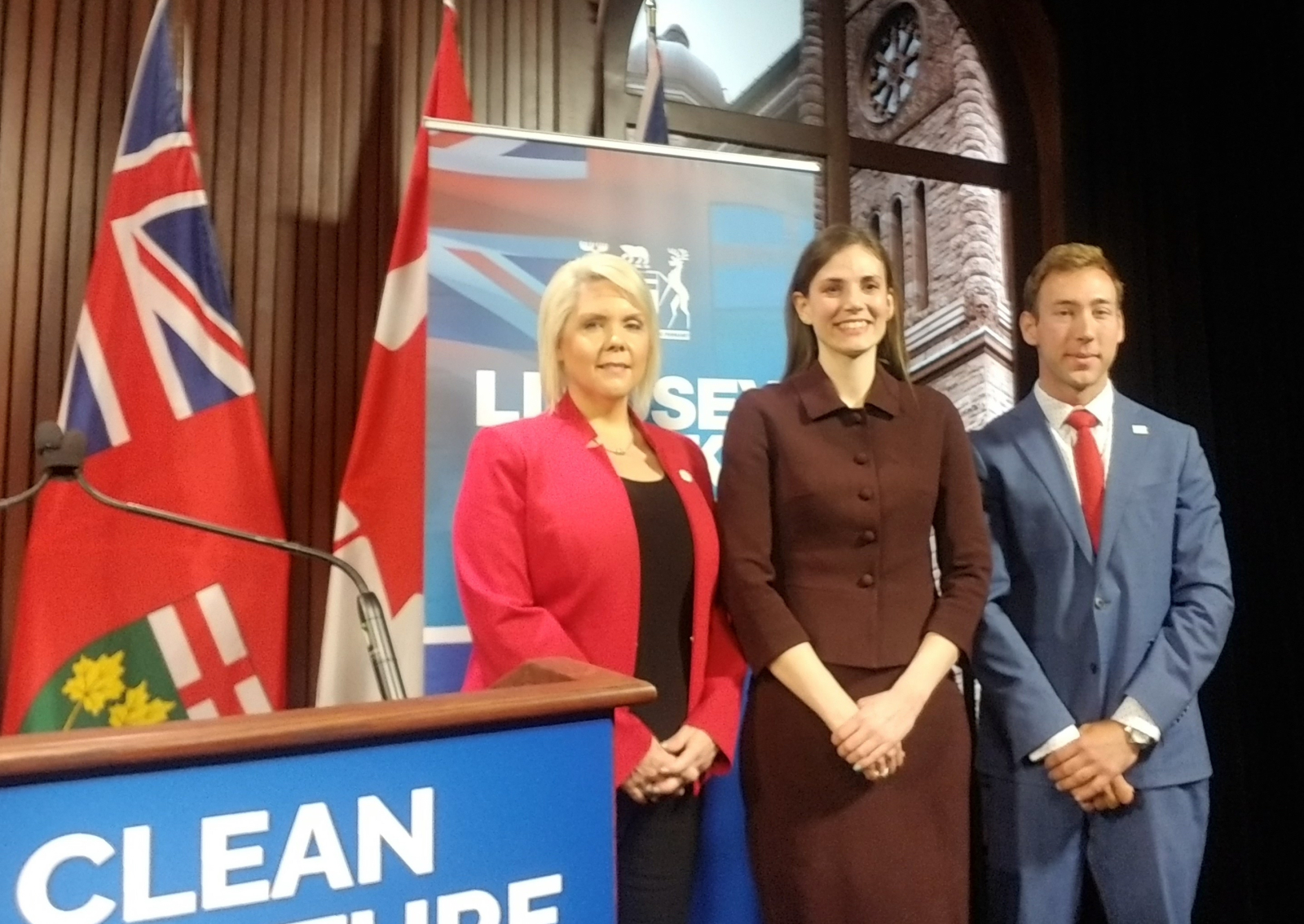 The latest move to push forward the Ontario government's nuclear agenda comes in the form of a motion introduced on Thursday by the PC MPP for Durham, Lindsey Park, whose riding includes the Darlington nuclear plant that is in the early stages of a major refurbishment expected to cost $12.8 billion.

It reads: “That, in the opinion of this House, the Government of Ontario should include nuclear energy and the development of Small Modular Reactors as a clean energy option in its environment, climate change and clean energy planning and policies."

The motion, which was debated and then passed by the PC-controlled legislature on Thursday, comes after the premiers of Ontario, Saskatchewan and New Brunswick agreed in December to work together to push forward the development of small modular nuclear reactors (SMRs).

Saskatchewan is a major miner of uranium, producing around 20 percent of world supply, while New Brunswick is home to Canada's only nuclear plant for electricity generation outside of Ontario.

But critics fear the Doug Ford government will be diverting funds that would be better served by focusing on proven and affordable clean technologies that don’t have the risk of catastrophic accidents and unanswered questions about long-term storage of radioactive waste hanging over them.

“We have a climate crisis right now, we can’t wait ten more years for some solution that may or may not be delivered,” said Mike Schreiner, MPP for Guelph and leader of the Green Party of Ontario. “We have solutions right now that are cheaper and cleaner and this government is literally ripping them out of the ground.”

The Ford government has cancelled more than 700 wind, solar and other clean energy projects, including two wind farms that were mid-construction. It has also dismantled the cap-and-trade system that put a provincial price on pollution and funded a range of green initiatives, and is taking its fight against the federal carbon price to the Supreme Court.

SMR technology is currently at an early stage of research and development. It is expected to make extensive use of factory-built modules that can be transported by truck and incorporate inherent safety features allowing them to be run without a high degree of technical supervision. Such modules would typically have a capacity of less than 300 megawatts, or between 10 and 20 times less than Ontario's three existing reactors.

The Ford government is pushing SMRs as a possible replacement energy source for some industry and for remote First Nation communities and other rural locations that currently rely on diesel generators. They also say other provinces are interested in using the technology to reduce their reliance on fossil fuels to generate electricity.

Dianne Saxe, the former provincial environmental commissioner whose role was done away with by Ford, said the motion risked diverting money that would otherwise go to proven green options.

“If what they mean is they are going to spend heavily on building new nuclear, then I’m really concerned that it is going to drain money away from what we already know is clean and works, which is wind and solar and biomass and small hydro and storage," she said. "That’s where most of our money should be going and if they’re diverting money away from that it’s a bad idea.”

She argued that while all sources of energy have drawbacks, none but nuclear have consequences “that create a mortal danger to every generation after us for a hundred thousand years.”

Ontario currently gets around 60 per cent of its electricity from nuclear power. Along with the Darlington refurbishment, it is also spending $13 billion to refurbish six of the eight reactors at the Bruce nuclear plant on Lake Huron. Both of those refurbishments were approved by the previous Liberal government of Kathleen Wynne, while the Ford government is looking to further expand the life of the aging Pickering plant until 2025.

Park said in an interview that Ontario needed to embrace more nuclear in an electricity supply mix that also should include wind, solar, hydro, and even natural gas

“I don’t think you can be an environmentalist serious about reducing greenhouse gas emissions in 2020 without supporting nuclear energy as part of the supply mix,” she said.

But the Ford's government actions in dismantling of green energy, abandoning a wide range of energy efficiency programs and rebuffing an offer from Quebec to provide it with a long-term supply of cheap hydroelectric power, mean that gas-fired generation will largely fill the void left by nuclear refurbishments and lead to a tripling of emissions from the province's electricity sector in the next decade.

The nuclear industry cheered the motion, saying that it would provide clarity to investors and other potential partners, and said it would mean nuclear projects would be eligible for government programs targeted to clean technology.

"The recognition that nuclear is clean sends a clear message that the government sees nuclear as part of its climate change plan and that provides confidence to investors and other possible partners," said Erin Polka, a spokesperson for the Canadian Nuclear Association. "Companies might not undertake a project if it's ambiguous whether the project would be eligible for support as clean energy. Why go to all the trouble of planning and applying just to learn you don't qualify? Clarity is good."

Park told National Observer that SMRs present Ontario with an opportunity to show leadership: “We’re at a critical time in history and also in the province of Ontario where we have this new technology for nuclear that is on the horizon and we have other provinces in Canada telling us they are waiting on us to take the lead,” she said, referring specifically to Saskatchewan.

“They are waiting on us to do the prototype and so if that’s successful that is something they could implement in their province to replace coal,” she said.

Saskatchewan currently gets almost half of its electricity from coal and another third from natural gas, according to the Canada Energy Regulator.

In response to that idea, the Green Party's Schreiner said that "Saskatchewan can wean itself off coal right now with lower cost wind and solar solutions."

He said that nuclear currently cost around 9c per kilowatt-hour (kWh) and could rise to 15c/kWh with the Darlington refurbishment while the cheapest estimate he had heard for small modular nuclear was 16c/kWh. The Nation Rise wind farm the Ford government cancelled was selling power at 7c/kWh. He noted that wind and solar contracts recently signed in Alberta were even cheaper.

The federal Liberal government is not necessary opposed to SMRs, saying the country is well positioned to capture a share of the emerging global market it estimated would be worth some $150 billion per year by 2040. It is currently reviewing the 50 recommendations of the Canadian Small Modular Reactor Roadmap in areas including waste management, regulatory readiness and international engagement.

Is this another example of

Is this another example of industry capture of the public purse? Where is the non-political discussion on the cost, time line, environmental impact and emissions forecast year by year each year to 2040 of the main alternatives, making assumptions clear. By main alternatives I expect to see 1. significant expansion of renewables, 2. long term contract fort Quebec hydro imports & associated additional transmission capacity costs, 3. existing nuclear refurbishment using gas plant substitution during the rebuild period, and 4. the number and likely operational dates on small nuclear reactors. Why is this so hard when what is at stake is so large? Emissions need reducing now, not in 10 years or more.

This proves once again that

This proves once again that we cannot rely on government to act in our best interests. I call on all Ontarians to take individual action to solve the climate crisis. I am installing solar panels on my house. I can only assume that anyone in favour of nuclear would be happy to have a reactor and waste storage in their own backyard.

"I can only assume that

Of course we would; or over the back fence, if they won't fit.

Also see https://www.quora.com/Is-nuclear-fission-energy-conventional-or-non-conv... . (Those Greenpeace associates are voluntarily close to working nuclear fuel, which is 10000 to 100,000 times more radioactive than the waste it will become a few years later.)

I think most people are

I think most people are vaguely aware that uranium is a rather common material, common enough to make nature slightly radioactive everywhere -- not just at uranium mines -- and is not the only one.

The hope they may be tempted to see in "small modular reactors" is that there won't be huge, persistent amounts of leftover radioactivity. They'll still be induced radioactivity devices, but if nuclear engineers are onto their job, surely they can find a way the waste radioactivity to be concentrated, or persistent, but not both?

Why couldn't an updated version of a CANDU bundle* give one person's lifetime supply of electricity, and then, as nuclear waste, be huggable without harm a few years later? Why couldn't everyone's bundle be dropped in a deep part of the ocean with the assurance that even if its corrosion-resistant metal skin corrodes totally, the meat is powerless to radioactively pollute the ocean in the same way the saltshakers in the *Titanic* are powerless to salt it?

Bring *that* on and if, a decade or two from now, a future version of Dianne Sax says *those* waste bundles "create a mortal danger to every generation after us for a hundred thousand years”, she'll be telling a lie meant to hurt people in that same decade.

Regrettably, having studied the matter, I have to say that hope, if it exists, is foolish.