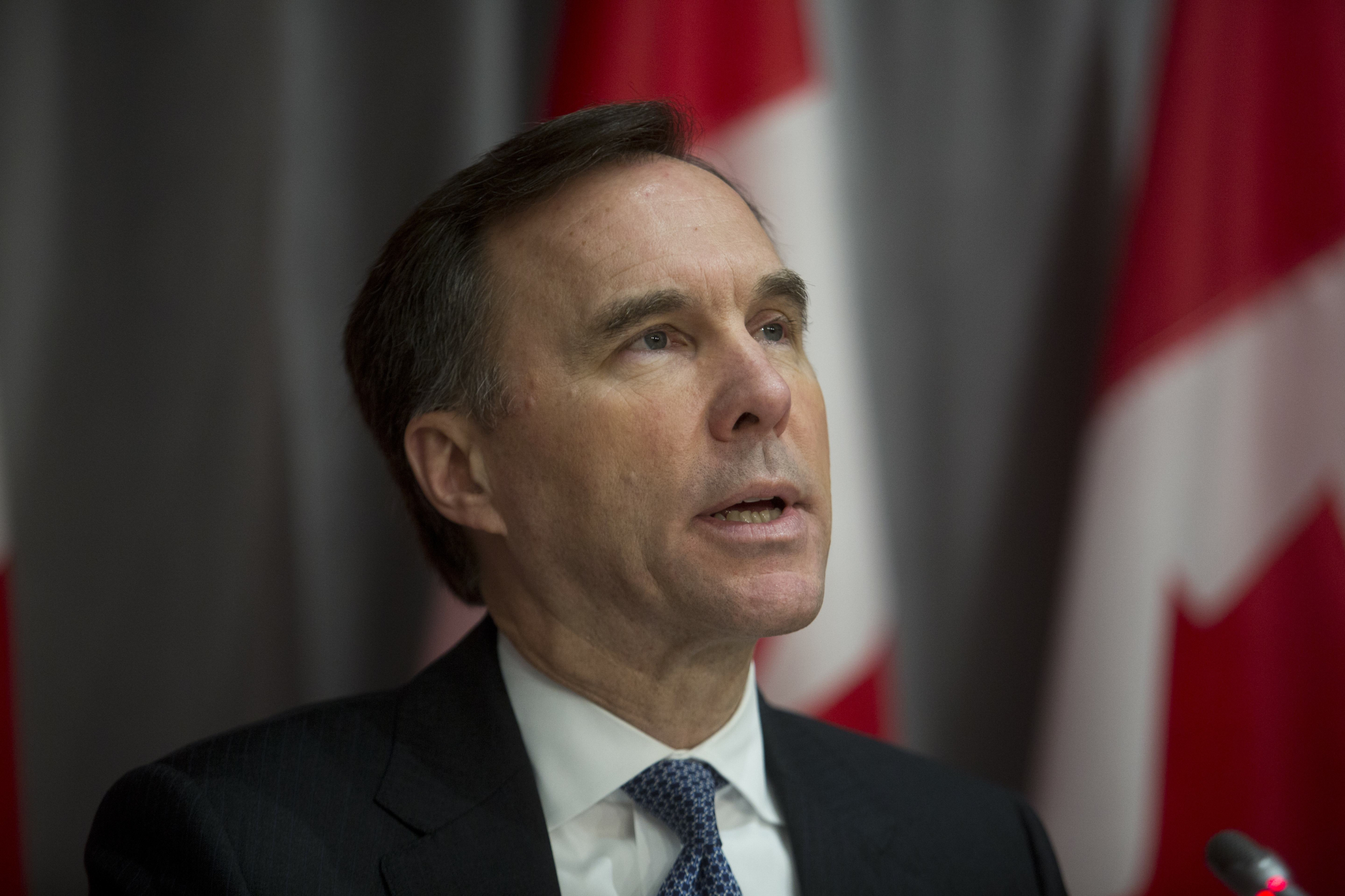 Finance Minister Bill Morneau says Canada’s emergency COVID-19 legislation won’t “discriminate” between businesses, after he was challenged on Wednesday by a senator to ensure it wouldn't bail out "sunsetting, high-polluting industries."

Canadians must be able to afford food right now, Morneau told the Senate of Canada on Wednesday, and if a wide range of businesses, including those in the energy sector, aren’t offered immediate support, the country will experience even steeper levels of unemployment.

Environmental groups praised political parties for coming together to help Canadians battle the effects of the coronavirus. They also argued that the new law’s broadening of Export Development Canada (EDC)’s mandate will make it easier to direct more public money to oil and gas companies without sufficient oversight.

The law that was put in place on Wednesday hands the government extraordinary spending and borrowing powers, and approves new payments to workers, employers, parents, low-income people and others who have suffered, as the virus shreds the economy and tears through the population.

“Workers, families, communities and small businesses across the country urgently need financial support during this incredibly challenging time. We applaud all of the federal parties for working together to take this positive step to pass legislation which will help those struggling,” said Julia Levin, climate and energy program manager at Environmental Defence Canada.

“But hidden inside this new law were changes that will make it easier for Canada’s export credit agency, Export Development Canada, to funnel billions more towards domestic oil and gas operations — without public scrutiny.”

EDC responded that it "stands ready to respond to the federal government’s call to action" and looks forward to doing its part to help Canadian companies navigate the crisis.

Will investment align with climate action?

Morneau was one of several federal ministers who spoke at a compressed Senate session in Ottawa that examined Bill C-13, the Trudeau government’s $107-billion aid package in response to the coronavirus pandemic. The bill received royal assent Wednesday afternoon, and is now law.

“How can Canadians trust that investment will align with climate action?" asked @SenRosaGalvez about the government's COVID-19 aid package, passed by Parliament on Wednesday.

Independent Sen. Rosa Galvez, who has studied pollution control, environmental impact and decontamination, was one of several senators who asked Morneau to offer words of encouragement that the legislation was not the product of short-term thinking.

“How can Canadians be reassured that these mechanisms will be used to invest in the industries of the future, and not of those of the past — in building a truly resilient, sustainable economy, rather than keeping corporate welfare on life-support for sunsetting, high-polluting industries?” Galvez asked.

“How can Canadians trust that investment will align with climate action, with reconciliation, (with) respect for human rights, since there are no such safeguards in the present law?”

Morneau replied that he felt the “subtext” of Galvez’s question was that “we’re living in normal times, and we’re not.”

“We’re in a situation where there are a significant number of businesses, small and large, that are going to find themselves under extraordinary duress in the coming weeks and months,” said the finance minister.

“We are not discriminating on the basis of one business being better than another business, one employee being somehow superior to another employee. We’re recognizing that people are under severe strain, that people in short order won’t have enough money for groceries.”

The government is also looking at another aid package specifically for the oil and gas sector, Morneau confirmed on Wednesday, which he said was dealing not only with fallout from the virus but also an oil price crash, and difficulty accessing equity markets.

The combination of the global economic slowdown and the drop in oil prices "is having a devastating impact on Canada’s oil and natural gas sector," said the Canadian Association of Petroleum Producers, Canada's largest oil and gas lobby group, in a March 18 statement.

Ottawa is discussing providing “some sort of appropriate credit opportunities,” particularly for small and medium-sized firms, but also something for the largest oil and gas companies who are “under strain too,” Morneau said Wednesday.

'Likely to amount to a bailout' says Oil Change

A wide range of representatives from labour, social justice, environmental and faith organizations have been calling on Canada not to direct a bailout for the oil and gas industry to companies, but rather direct its efforts to workers, saying that climate change must factor into all government decision-making.

The new law amends the Export Development Act to broaden the mandate of EDC, which normally focuses on Canadian exports abroad, to support “domestic business,” and to allow Morneau, until Sept. 30, 2020, to determine how much capital the Crown corporation is authorized to have. It also broadens the transactions that the International Trade Minister Mary Ng, with Morneau’s approval, can authorize.

Morneau said the government’s objective was to get money to workers and businesses quickly, so that employment opportunities would still be there for Canadians when the crisis is over.

“We know that Canadians will agree with us that it’s urgent, and it’s important, and it should be without particular bias at this moment, other than a bias to support people through this time,” he said.

But the government was already tipping its hand by repeatedly naming the oil and gas industry as a critical sector in need of support, nonprofit Oil Change International told National Observer.

Analyst Bronwen Tucker argued that the new law “allows for an unlimited amount of public finance to flow to the oil and gas sector in a time with extremely low interest rates.”

“In this sense it is likely to amount to a bailout, and one with very little oversight,” Tucker said. “While he (Morneau) denies bias to any sector, he is also repeatedly naming oil and gas as a key sector that needs support and saying he is on the phone with them every day.”

Oil Change International says EDC has provided financing of US$10.6 billion a year on average for oil and gas between 2016 and 2018. The organization includes in this calculation financing for the Trans Mountain oil pipeline expansion project, through the Canada Account.

The Canada Account is a federal fund that EDC administers. The Crown corporation says the Canada Account is used for transactions it is “unable to support” due to a combination of risks, but which are determined by the government to be in the national interest anyway.

National Observer asked EDC to respond to the comments made by Environmental Defence Canada and Oil Change International.

Shelley Maclean, principal advisor for external communications at EDC, said the organization "stands ready to respond to the federal government’s call to action."

"We’ve already been working closely with our public and private sector partners, coordinating efforts and planning next steps," said Maclean. "We look forward to doing our part to help Canadian companies of all sizes navigate these unprecedented times."

What a waste of taxpayers’

What a waste of taxpayers’ money. We need far more testing kits, we need protective clothing for hospital workers, we need more ventilators, we need to invest in tests that will test for the COVID-19 antibody (currenting we can only test for viral proteins) and we need to develop a safe effective vaccine s. Why prop up oil and gas companies that have made huge profits in the past while exploiting consumers. We need clean biofuels not more polluting gas and oil products. Have gas and oil prices dropped for the consumer? No of course not! Where would the governments go without their safe of tax profits. Where would the politicians) friends in the gas and oil companies get their huge salaries and benefit packages. I wish they would stop saying this is all about the economy. Our economy is going suffer a big recession whether the government bails out these companies or nut. Please invest is a pollution free future oe we will have no future to worry about. If COVID 19 doesn’t get us climate change will!