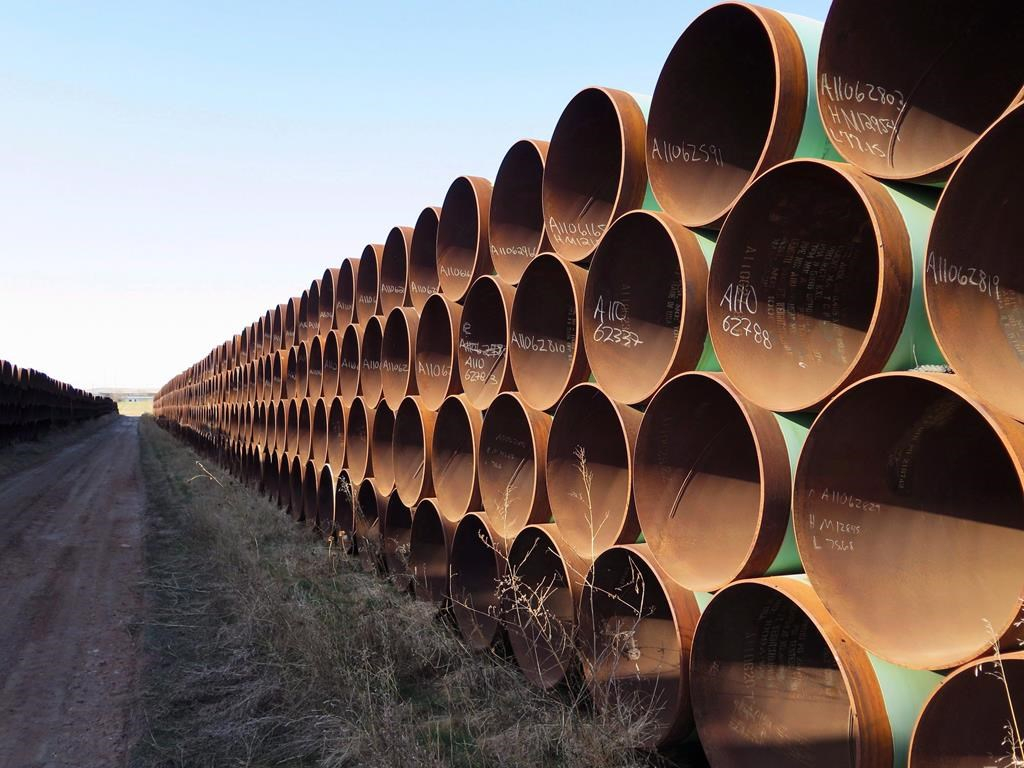 A final investment decision clearing the way for construction of the long−delayed Keystone XL Pipeline was greeted with relief on Tuesday by an Alberta oilpatch where production has grown faster than pipeline capacity.

The decision by Calgary−based TC Energy Corp. to go ahead with the US$8−billion project was widely anticipated after it cleared major U.S. regulatory hurdles earlier this year and began site preparation work in Montana, South Dakota and Nebraska.

In a surprising development, however, the Alberta government has agreed to invest about US$1.1 billion (C$1.5 billion) as equity in the project, thus substantially covering planned construction costs through the end of 2020.

The remaining US$6.9 billion is expected to be funded through a combination of a US$4.2−billion project level credit facility to be fully guaranteed by the Alberta government and a US$2.7−billion investment by TC Energy.

"We cannot wait for the end of the pandemic and the global recession to act," said Premier Jason Kenney in a statement on Tuesday.

"This investment in Keystone XL is a bold move to re−take control of our province’s economic destiny and put it firmly back in the hands of the owners of our natural resources, the people of Alberta."

He said Alberta will be able to sell its shares for a profit after the pipeline is built and it will generate a net return of over $30 billion through royalties and higher prices for Alberta oil in the next 20 years.

Alberta’s involvement was praised by CEO Mark Little of Suncor Energy Inc., one of Canada’s largest oilsands producers and refiners.

"Access to new markets and expanded connectivity to existing markets is critical, especially the U.S. Gulf Coast through KXL, which will significantly expand access to the largest heavy oil refining capacity in the world," he said in an emailed statement.

Oilsands producer Cenovus Energy Inc. has a contract to move 150,000 barrels per day on Keystone XL and views its construction as "crucial" to the success of the Canadian oil industry, said spokesman Brett Harris.

"This investment in Keystone XL is a bold move to re−take control of our province’s economic destiny and put it firmly back in the hands of the owners of our natural resources, the people of Alberta." Alberta Premier Jason Kenney

The decision disappointed U.S. environmental groups that have fought against the pipeline in regulatory hearings and the courts for years.

Catherine Collentine, associate director of the Sierra Club’s Beyond Dirty Fuels campaign, took issue with the timing of the announcement and vowed to continue the fight.

"By barrelling forward with construction during a global pandemic, TC Energy is putting already vulnerable communities at even greater risk," she said.

Canadian opponents were also critical, with Environmental Defence calling the Alberta investment a "reckless use of public money" and the Pembina Institute suggesting public dollars would be better spent to reduce oilpatch greenhouse gas emissions and support workers.

Oil production in Alberta is expected to decline this year as producers cut billions of dollars in spending due to a global price war between Saudi Arabia and Russia. On Tuesday, Imperial Oil Ltd. said it would cut $500 million from capital spending and another $500 million in operating expenses.

But output was also curtailed last year by Alberta government decree to offset steep local price discounts due to a glut of trapped oil that had overwhelmed storage capacity.

The 1,947−kilometre Keystone XL pipeline will be able to carry 830,000 barrels per day of crude oil from Hardisty, Alta., to Steele City, Neb., where it will connect with TC Energy’s existing facilities.

Once the project is complete and in service, TC Energy said it expects to acquire the Alberta government’s equity investment under agreed terms and conditions and refinance the US$4.2−billion credit facility in debt capital markets.

Richard Masson, executive fellow at the University of Calgary’s School of Public Policy, said the Alberta investment was likely needed to mitigate a looming political risk from the U.S. presidential election in November.

"What happens if the Democrats win and pull the (presidential) permit?" he said, noting former Democratic Party president Barack Obama rejected the pipeline in 2015, a move that was reversed by Republican Donald Trump.

Market access is expected to remain tight until 2023 when Keystone XL, Enbridge’s Line 3 replacement and the Trans Mountain pipeline expansion should be operating, he said, but more pipeline capacity will be needed if oilsands production grows as forecast thereafter by an estimated 100,000 bpd per year.

The Canadian Energy Pipeline Association said building the Keystone XL project provides a "critical boost" for the economies of Alberta and Canada.

"The Alberta government has made an emphatic statement by what it’s done with XL," CEO Chris Bloomer said.

"The next step is for the federal government to do something as emphatic for the industry to build confidence going forward so we do have an industry that can contribute to the economy the way it has been."

The federal government bought the Trans Mountain pipeline and is building its expansion, Bloomer acknowledged, but he added that was necessary because Ottawa has failed to prove its support of industry.

"The project increases our market access — safely, responsibly, and sustainably — and fits within Canada’s climate plan," he said in a statement.

In the real world, meanwhile,

The IPCC advises that the world must nearly halve GHG emissions by 2030 and eliminate them by 2050 to keep warming below the danger limit of 1.5 C.

Unfortunately, people who heed the science — and think propping up the fossil fuel industry in an age of climate change disaster is criminally insane — were unavailable for interview.

Jaw-droppingly devoid of economic or environmental sense and absolutely what I expect from kenney and the flat earthers running albertar Having lived in Mike Harris Ontario where more people railed against him than supported him, but he was the face of Ontario, I try to remember that at least 40% of Albertans are furious at Kenney robbing the province blind to shovel moeny at the dying oil and gas industry rather than pivoting to green job creation and planet healing ways.
My fondest schadenfreude heart's wish is that he is in power when it all truly implodes and he wears it into the history books.
Imagine the NDP had expropriated the $18 B teachers' pension fund to underwrite solar installations. Would the national/billionaire press have reacted to that or would it have been crickets like it was with Kenney's move to use it for texas oil barons?